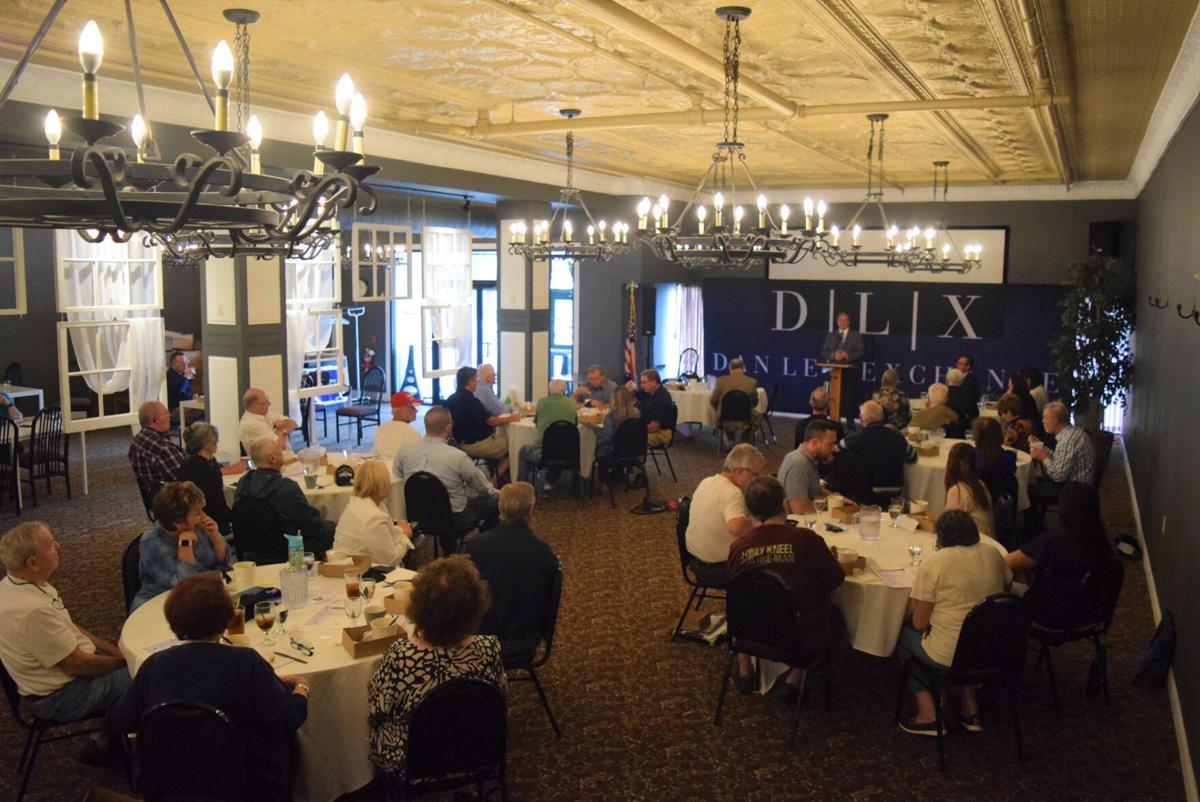 Members of the Richland County Republican Party listen Monday during the group's monthly luncheon in the Kobacher Room at DLX Events and Catering, 28 N. Main St., in Mansfield.

But when former Speaker Larry Householder was unanimously removed from the role after his arrest and indictment on federal bribery charges in July, the Allen County representative was asked to take the job.

It's the latest responsibility for Cupp, who has served in all three branches of government and at both the local and state levels: as an Allen County commissioner, a four-term state senator, a court-of-appeals judge, and a justice of the Supreme Court of Ohio.

"When duty calls we have to step up and do our part. I'm happy to do that and honored to be able to lead the Ohio House of Representatives," Cupp said during the local GOP monthly luncheon.

Until he took over his new role on July 30, Cupp said he had no idea how Householder had firmly controlled the House and how fractured the relationship had become between the chamber, the Ohio Senate and Gov. Mike DeWine.

"The Senate president (Larry Obhof) and the speaker of the House and the governor hadn't actually spoken together for several months because of the bad relationship," Cupp said, adding many good pieces of legislation had been "hung up" because of the past speaker's work.

"We are unclogging all of those and I've had at least a dozen conversations with (Obhof) about how we're going to move these good bills forward," Cupp said.

The 69-year-old Cupp said he, Obhof and DeWine had been on a conference call together to discuss common issues.

"I just want to let all you know that members of the Ohio House and the Ohio Senate are ethical, hardworking people who are there for the right reasons. They want to help create more opportunities. They want to fashion the law. They're going to help people by fashioning laws that make our state more prosperous," Cupp said.

Representing the 4th District, Cupp said he plans to decentralize and empower the House membership.

"We just have members that have an incredible amount of knowledge and experience. And unfortunately, a lot of that was corralled (under Householder)," Cupp said. "In my style of leadership, we're going to unleash that. We are going to empower members, empower committee chairs, and work hard and work out issues so that we can get the best possible policy for the state of Ohio."

"There is only one candidate for president this year (who) has truly stood up for the principles that have made our nation great. And that of course is our President, Donald Trump," Cupp said. "That we live in certain and challenging times is beyond dispute. And we have seen this summer the specter of lawlessness in the streets of our nation's cities.

"I don't know about you, but I am left in total disbelief as the Democrat mayors in some parts of this country have essentially turned over parts of their cities to the rioters."

Cupp said the 1st Amendment protects the rights of Americans to peaceably assemble.

"Much of what we have witnessed this summer across our nation has not been peaceful assembly. It has not been free speech. Instead, it's just been the opposite," he said, citing what he had seen in downtown Columbus this summer.

Protests, some of which have turned violent, began around the country after the killing of a Black man named George Floyd by Minneapolis police on Memorial Day. A number of police officers are charged with murder in that incident.

"Vandalism, damaging and defacing private and public property, (and) threatening law-abiding citizens is not assembling together in a peaceable manner," Cupp said.

Obhof is 'frustrated' by the state's shifting COVID-19 goals

Ohio Sen. President Larry Obhof said Tuesday he is "frustrated" by Gov. Mike DeWine's shifting goals regarding the COVID-19 pandemic that reached the state in March.

A virtual "Meet the Candidates" night is planned Saturday at 7 p.m., sponsored by the Mansfield NAACP Voter Registration Committee and the North End Community Improvement Collaborative.