EDITOR'S NOTE: This story was provided to Richland Source by Your Voice Ohio through a collaborative agreement. This is the first in a five-part series on Ohio voters and the election.

A new poll that shows President Donald Trump trailing former Vice President Joe Biden in Ohio also reveals that Biden’s “strong” supporters here outnumber Trump’s, a snapshot of the state less than 100 days from an election that will determine whether Ohio continues its unmatched swing-state streak.

The poll also revealed the issues motivating each candidates’ backers: Biden’s identified coronavirus as their top concern, while Trump’s said it was the economy in a year defined by a global pandemic, economic uncertainty, and a reckoning over racial justice.

Conducted online between June 24 and July 15, the survey of 1,037 registered voters showed Biden leading Trump 46 to 42 percent. The margin of error in the poll is plus or minus 3 percentage points. 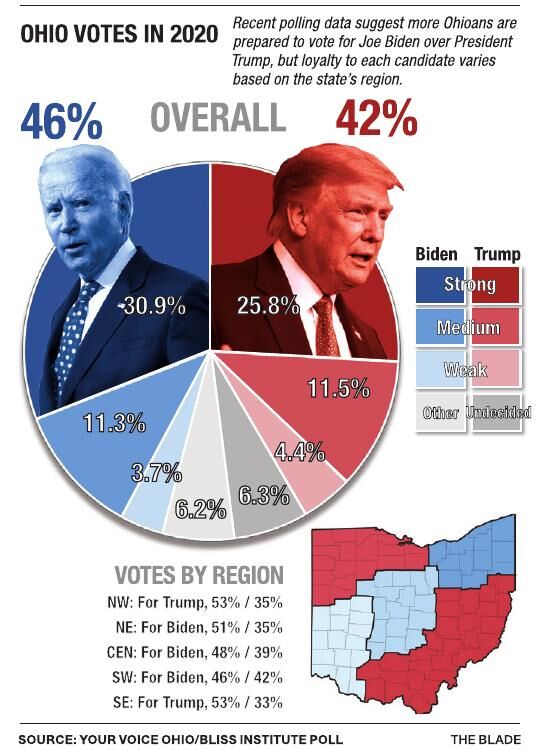 The poll was commissioned for Your Voice Ohio’s Election 2020 project, which explores the complexity of the state’s nearly 12 million residents through community engagement, data analysis, and collaborative reporting. It was conducted jointly by the Center for Marketing and Opinion Research in Akron and the Ray C. Bliss Institute of Applied Politics at the University of Akron.

John Green, director emeritus of the Bliss Institute, said the results reinforce that Ohio is still attainable for Democrats and shouldn’t be written off as a battleground just because Trump in 2016 came away with an 8-percentage-point win in Ohio, which for decades has mirrored the national vote.

Ohio has the longest winning streak in the nation, picking the victor in every presidential election since 1964.

“No Republican has ever been elected or reelected in American history without carrying Ohio, so there’s a particular burden on Trump and his allies and supporters to compete effectively in Ohio,” Green said. “These numbers forecast a very competitive race in the state.”

Your Voice Ohio’s poll is consistent with recent surveys from other organizations that show a close race here as both campaigns enter the final stretch with a playbook rewritten by coronavirus. But researchers caution against reading too much into Biden’s early lead.

“With this much happening in our society, the numbers go back and forth, especially with Ohio,” said Michelle Henry, president of the Center for Marketing and Opinion Research. “In some states it’s going to be clear. In Ohio, it’s just not going to be.

“Even though 2016 went widely for Trump, there was quite some time when it went back and forth until it became very red.”

The researchers said the survey offers two main views: a snapshot of candidate preferences subject to change over the next three months, and insight into what issues are top of mind for voters, a metric that’s more likely to remain consistent until November.

The 6 percent of undecided voters surveyed aligned with Trump’s backers on their top issues. Another 6 percent who said they are likely to vote for a candidate other than Trump and Biden cited the economy, coronavirus, racism, and social services.

Strikingly, the poll also revealed an enthusiasm gap between Biden’s and Trump’s supporters. Nearly 31 percent said they strongly supported Biden, versus 26 percent for Mr. Trump. The percentage of moderate and weak support for both candidates was roughly the same.

Green attributed the result to greater support in general for Biden, saying it bodes well for the former vice president in the long run.

“People with strong preferences are much less likely to change their preference ... so the strength of preference really matters,” Green said.

This particular survey didn’t offer respondents the opportunity to explain their preferences, he said, or the ability to cite anti-Trump sentiment as a reason for backing Biden.

“Some of the other polls in Ohio and elsewhere have shown that a lot of people say their primary reason that they’re backing Biden is because they don’t like Trump. And some people take that to be evidence of a lack of enthusiasm,” he said. “For some people, maybe it is. But you can be really unhappy with Trump and still have a strong preference for Biden.”

Your Voice Ohio’s poll also broke the results down by region.

Biden leads in northeast Ohio (51 to 35 percent), the state’s most Democratic region, and by smaller margins in central (48 to 39 percent) and southwest Ohio (46 to 42 percent).

Trump is ahead in the northwest (53 to 35 percent), where Toledo is firmly blue but the surrounding rural counties are heavily red, and the southeast (53 to 33 percent).

Kyle Bozentko, executive director of the Jefferson Center, a nonprofit that promotes civic engagement and sponsors Your Voice Ohio, said based on several voter engagement sessions conducted across the state, people appear more concerned about issues than the 2020 horse race.

“While the presidential campaign guides everything in what we see and consume, there is so much else happening that the urgency and level of importance of the presidential election itself kind of falls out of the picture,” he said.

Liz Skalka is politics reporter for The Blade of Toledo. She can be emailed at lskalka@theblade.com.

Your Voice Ohio is the country’s largest statewide media collaborative with a mission to represent the diverse voices of the state and the issues people identify as important. More than 60 news outlets have participated since its founding in 2015. Funding for the election project comes from the John S. and James L. Knight Foundation, Democracy Fund and Facebook.

Trump to visit Whirlpool factory in Clyde on Thursday

President Trump will be about 55 miles away from Mansfield on Thursday when he visits the Whirlpool factory in Clyde.