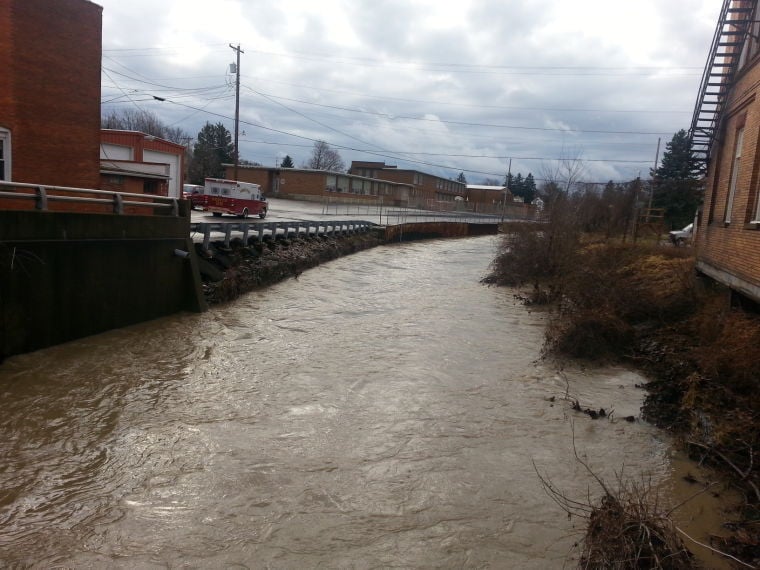 The Black Fork, running through Shelby, is often the cause of flooding in the city. (Richland Source file photo) 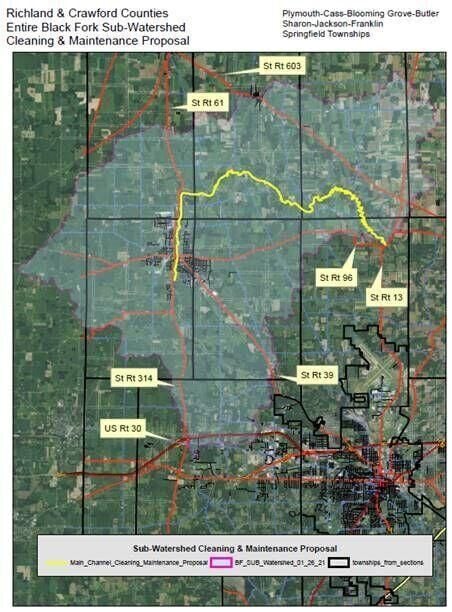 MANSFIELD -- The Richland Soil & Water Conservation District will use a drone to obtain video of about 15 miles of the Black Fork, the first step in a project that could improve drainage and reduce flooding in and around Shelby.

The drone work, which will be led by RSWCD agricultural technician Matt Wallace, was approved on Tuesday afternoon by a joint meeting of Richland and Crawford county commissioners.

The hour-long meeting was formed as as the result of a joint ditch petition filed Feb. 24 by the City of Shelby and rural community members from Richland and Crawford counties.

Petitioners are asking commissioners "to examine and study the economic benefits to the City of Shelby and the approximately 70,000 acres of the agricultural community that lie within the petitioned watershed area." 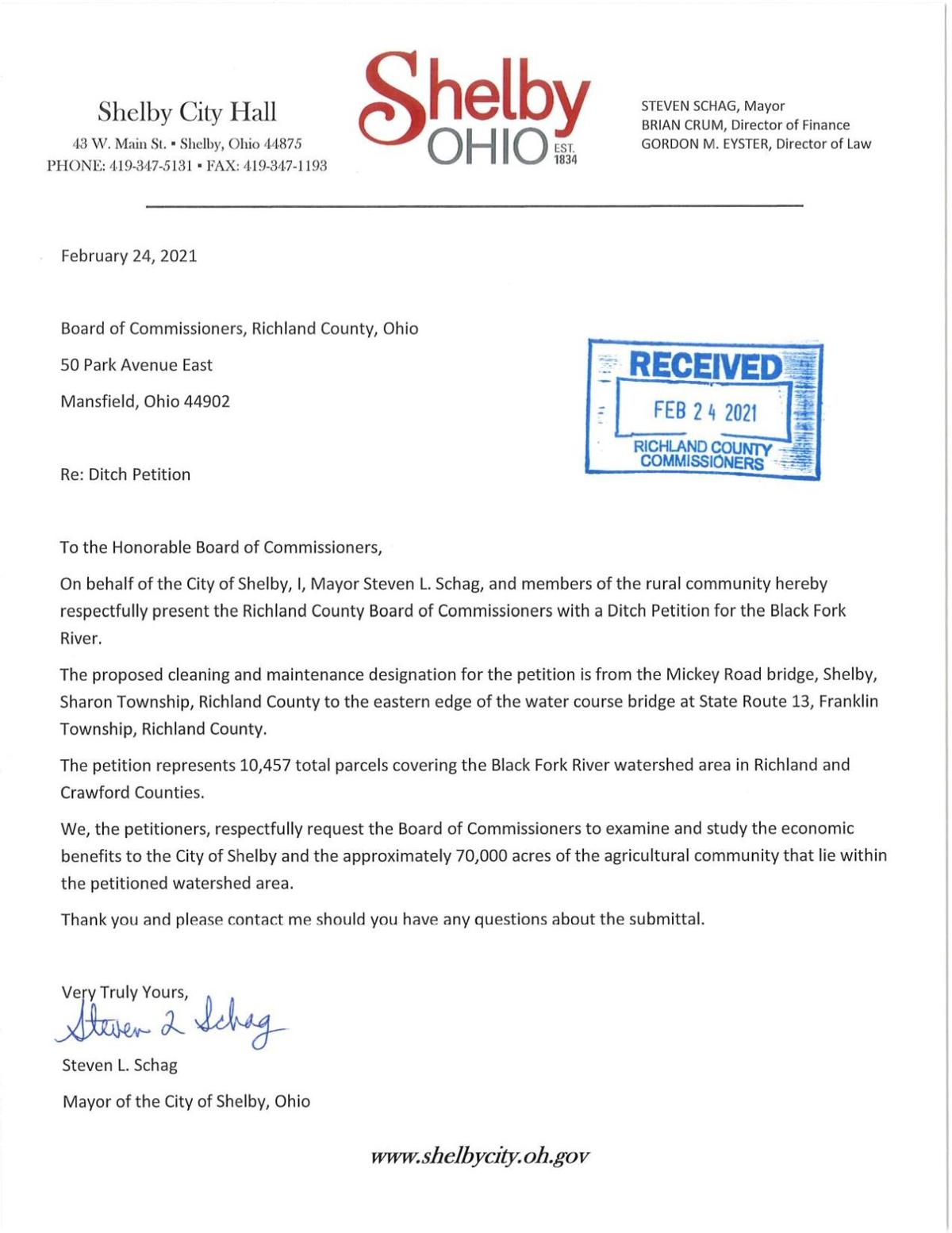 Shelby Mayor Steve Schag joined the meeting, as did representatives from both of the county engineer's offices and soil & water conservation districts.

Crawford County is involved since some of the parcels that would benefit from the effort are in that county, commissioners said.

The petition, filed under Ohio Revised Code Section 6131, will request the river be cleaned and maintained annually by removing felled trees, leaning trees, log jams, and debris piles. The clearing of the obstructions will allow for better drainage and reduce risk of flooding.

Property owners of about 10,500 parcels would be assessed for the work if the project goes forward. The vast majority of the property is in Richland County.

Flooding along the Black Fork has been an ongoing issue in the Shelby area, including a massive flood in 2007 and smaller floods in subsequent recent years.

RSWCD Director Erica Thomas said Delaware County has used a drone for similar projects, which will be combined with the in-person viewing of some sites by officials.

RSWCD officials have done drone footage of some of the area in the past, which can be viewed here.

"I think it's a good idea to use drone footage," Wallace said. "Not everyone is physically able to traverse the terrain out there. There is thick vegetation in some places and uneven footing."

Wallace said it would take about a week to complete the drone work, depending on the weather.

If it goes forward, the ditch project would be a continuation of two phases already privately planned and organized by Shelby residents at a cost of about $367,000, according to Thomas.

The RSWCD said phase one cleaned the waterway from Ohio 13 to State Street and that a second phase is nearly complete, clearing the Black Fork from State Street to Mickey Road.

"These two projects were beneficial in cleaning and clearing the river, but more work is necessary to help with continuing efforts to keep the river flowing," RSWCD said in an earlier press release.

The ditch petition would cover the Black Fork from the Mickey Road bridge in Shelby to the eastern edge of the water course bridge at Ohio 13 in Franklin Township.

The joint board of commissioners approved May 20 at 1:30 p.m. to physically view some of the sites along the Black Fork. They will view the drone footage on May 21 at 9:30 a.m. in the Richland County commissioners' meeting room.

The first of what could be two public hearings on the project is scheduled Aug. 5 at 6:30 p.m. at the Longview Center at 1495 W. Longview Ave. in Mansfield.

Crall will mail letters about the viewings and public hearing to all property owners who would be assessed as part of the project.

-- unanimous approval of 1.9 acres into the Village of Bellville from Washington Township. The request, made Feb. 9, was previously approved by both the township and village. It's located at Kochheiser Road near the intersection of I-71 and Ohio 97.

-- unanimous approval for the Richland County Juvenile Court to dispose of a vehicle.

-- unanimous approval of an overtime resolution for wastewater employees.

-- unanimous approval for the Richland County Engineer's Office to buy a used dump truck from Mifflin Township for $19,500. The 2012 vehicle has 33,062 miles.

-- unanimous approval for the purchase of a new 2021 Ford F150 pickup truck from Graham AutoMall for $29,640. The pickup will replace one destroyed in an accident when a semi failed to yield at a red light and collided with the vehicle at the intersection of Diamond and Fifth streets, engineer Adam Gove said. The insurance company for the semi sent the county a check for $20,286.

-- unanimous approval of the county's road mileage of 347.615 miles. The mileage decreased by one-tenth due to an annexation of a portion of Illinois Avenue into the City of Mansfield, Gove said.