MANSFIELD -- A third inmate at the Richland Correctional Institution has died in October from what the state calls a "probable" COVID-19 death, according to the Ohio Department of Rehabilitation and Correction,

The virus outbreak began in late September at the 1001 1001 S. Olivesburg Road state prison on the city's northeast side and spread quickly through the open-bay institution.

The most recent death occurred Saturday, a 51-year-old Port Clinton man who was sentenced to 10 years in prison in 2016 in Cuyahoga County Common Pleas Court. 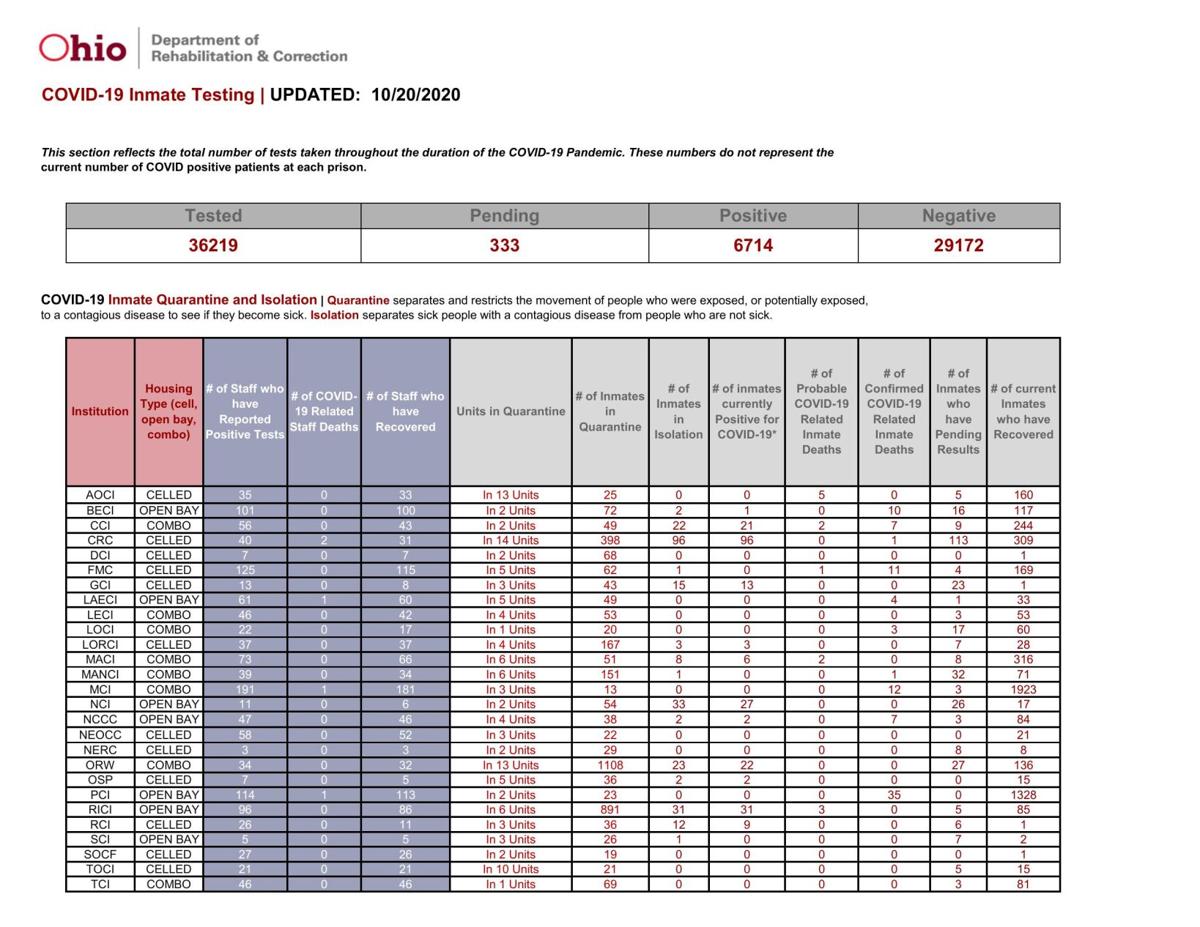 He accepted a plea bargain and pleaded guilty to two counts of rape and three counts of gross sexual imposition involving a 10-year-old girl.

He was removed from the prison on Sept. 27 and taken a local hospital and then The Ohio State University Wexner Medical Center, where he died. The Columbus hospital is the official prison hospital for inmates.

All three deaths are listed as "probable" until the state receives a death certificate, which takes several weeks. If COVID-19 is determined to be a cause of death, the deaths are moved to the "confirmed COVID-related" column on the chart found on ODRC's website.

As of Tuesday, there were 31 inmates with current positive COVID-19 cases and five with tests pending. The ODRC said 891 inmates were considered in quarantine and 31 more in isolation. The state website said 85 inmates have recovered from the virus.

Among prison staff, there remain 10 active cases. The state website said 96 staff members have tested positive and 86 of them have recovered.

ODRC spokesman JoEllen Smith said Wednesday there were five inmates from RICI hospitalized at OSU, including four in ICU, three of whom are on ventilators.

At the nearby Mansfield Correctional Institution, there are no inmates listed as currently positive for the virus, though 32 have pending test results. The ODRC said 151 inmates at MANCI are in quarantine and one in isolation. There has been one confirmed COVID-19 death at MANCI, coming in July, and 71 inmates have recovered from the virus.

Among MANCI staff, there remain five active cases. The state website reported 39 staff members have tested positive and 34 have recovered.

Statewide, since the pandemic reached Ohio in March, five prison staff members across the state have died from COVID-19 and 104 inmates are listed as "confirmed" or "probable" deaths from the virus.

A second inmate death at the Richland Correctional Institution is listed as "probable" for COVID-19, according to the Ohio Department of Rehabilitation and Correction website.