MANSFIELD -- A 72-year-old man has become the sixth Richland Correctional Institution inmate to die due from COVID-19, according to the Ohio Department of Rehabilitation and Correction.

All sixth deaths have occurred in October, the ODRC said, after a coronavirus outbreak at the open-bay style prison in late September.

The latest death was an inmate sentenced from Montgomery County in 2005 for aggravated robbery, felonious assault and armed robbery, according to ODRC spokeswoman JoEllen Smith. 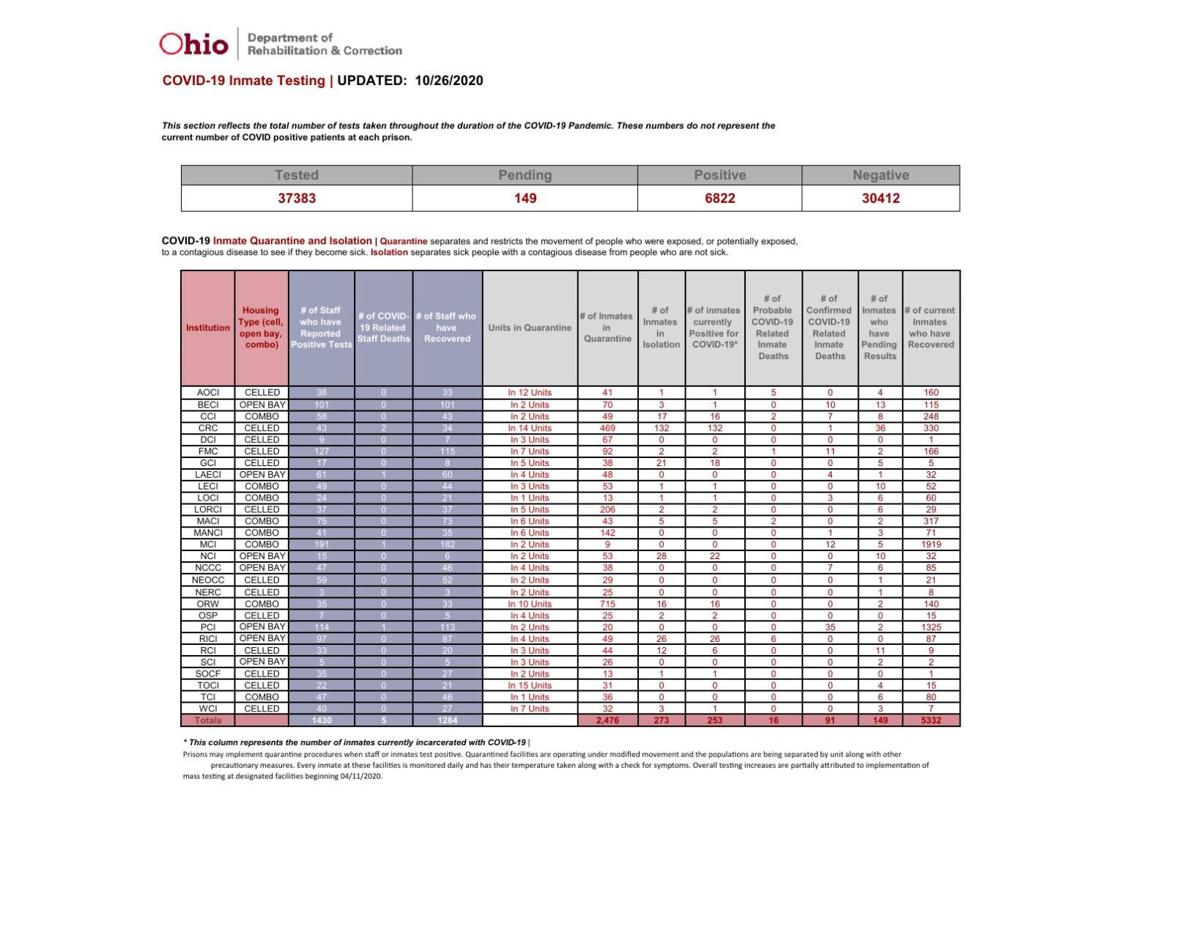 He died Friday at the The Ohio State University Wexner Medical Center, which is home to the prison system's primary medical facility.

As of Monday, two RICI inmates remain hospitalized at The Ohio State University Wexner Medical Center. One is in ICU, though neither is on a ventilator.

Like the previous five deaths, the Friday death is listed as "probable" for COVID-19 on the ODRC website. It remains "probable" until the state receives a death certificate, which takes several weeks.

If COVID-19 is determined to be a cause of death, the deaths are moved to the "confirmed COVID-related" column on the chart found on ODRC's website.

As of late Monday afternoon, there are 26 RICI inmates with current positive COVID-19 tests. There are 26 inmates in isolation and 49 considered in quarantine.

The ODRC said 87 RICI inmates have recovered from the virus.

There remain 10 active cases among RICI staff, which has recorded 97 positive tests with 87 recoveries.

At the nearby Mansfield Correctional Institution, there are no current positive tests among inmates, though one confirmed COVID-19 death at the prison occurred in July. Three inmates have test results pending and 71 inmates have recovered from the virus.

There remain six positive cases among MANCI staff with 41 positive tests and 35 recoveries.

No staff members at RICI or MANCI have died due to the virus.

Since the pandemic reached Ohio in March, the ODRC has reported 107 deaths among the state's prison inmates -- 91 confirmed and 16 probable.

Five prison members around the state have died due to COVID-19, the state said, one of which was a Richland County man who contracted the virus while working at the Marion Correctional Institution.

COVID-19: Two more RICI inmates die due to the virus; death toll at 5

Two more Richland Correctional Institution inmates have died due to COVID-19, according to the Ohio Department of Rehabilitation and Correction,