MANSFIELD -- If Richland County is "purple," or level four, next Thursday in the state's color-coded, COVID-19 ranking system, at least part of the worsening spread can be attributed to an ongoing outbreak at the Richland Correctional Institution.

The outbreak began about two weeks ago and state officials said Friday the Ohio National Guard has been activated and will be at RICI on Monday to provide staffing resources. Staff from other facilities have been assigned to RICI to assist in the daily symptom screening process, state officials said.

The parents of one RICI inmate told Richland Source on Friday morning the state is failing to provide proper medical care for inmates as the virus spreads throughout the dormitory-style prison among inmates and staff, claims denied by the Ohio Department of Rehabilitation and Correction. 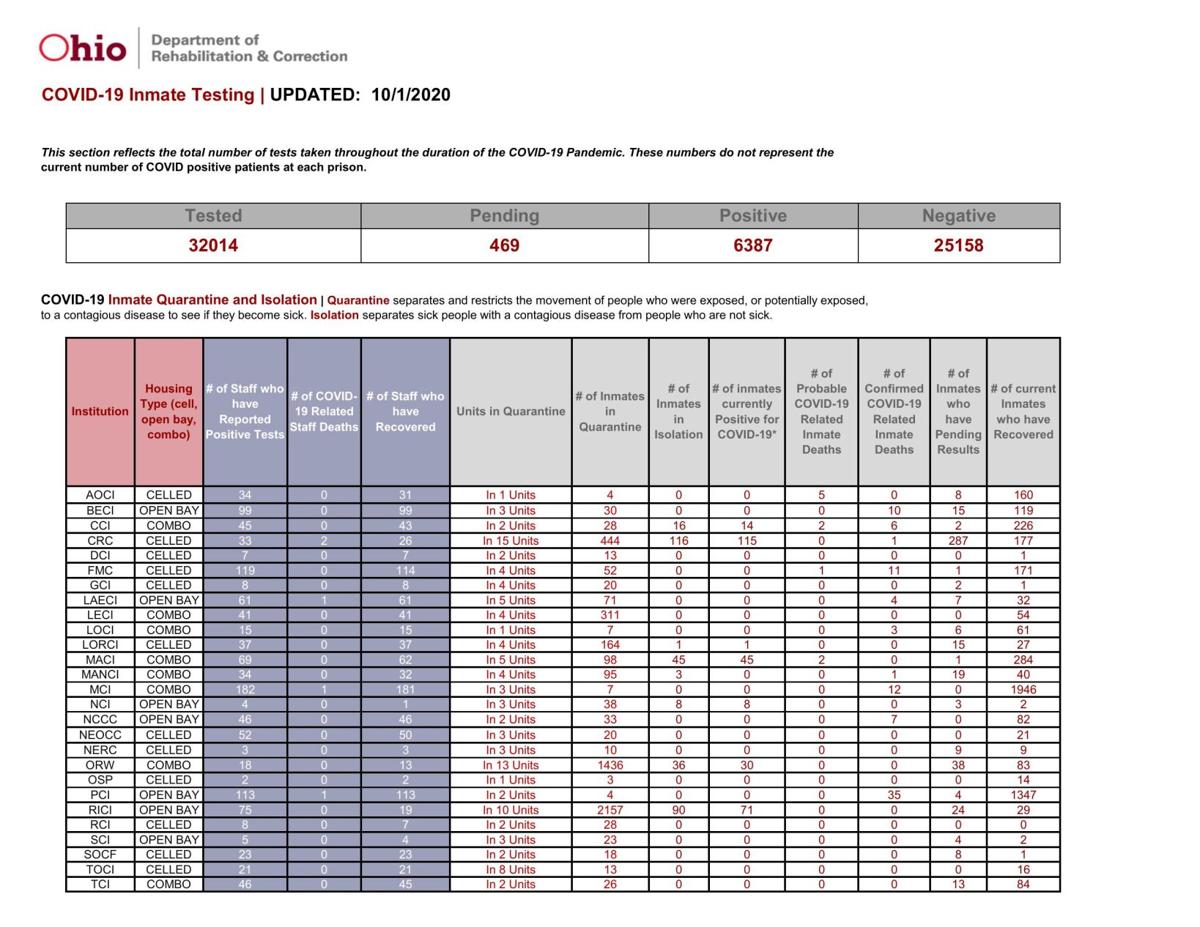 "There needs to be some sort of testing of inmates to see who is sick and who is not," said the inmate's mother, who asked her name not be used to protect her son. "They tell (inmates) to just lay there and if (symptoms) get worse, we will take you out of here."

However, ODRC spokeswoman JoEllen Smith said inmates with "symptoms of COVID-19 in a living unit cohort without widespread transmission will be tested."

She said the ODRC medical director has discretion over how many inmates in that living area need tested to confirm spread and it will conduct contact tracing when there is a positive case of COVID-19 in either staff or inmates.

Results of contact tracing will be shared with and utilized by prison healthcare staff, in consultation with the ODRC state medical director and regional nurse administrator, to determine if further testing is warranted.

Ohio prisons have been a hotspot since the pandemic reached Ohio in March. As of Thursday, according to the ODRC website, 284 inmates are currently positive statewide with 469 tests pending. There have been 90 confirmed inmate deaths due to COVID-19 and 10 deaths listed as "probable" due to the virus. The website said 4,996 inmates have recovered from the virus.

The state website reports 1,218 prison staff members have tested positive and that 1,118 of those employees have recovered. Five prison employees have died due to COVID-19, the state said.

At RICI, Smith said patients may remain in their living unit/family cohort unless symptoms require an infirmary or hospital level of care. Living units may be presumed positive based on congregate setting interaction as indicated by contact tracing or review of cameras.

Inmate infections do not count in the state's Public Health Advisory System, but prison staff members are included in the totals. The prison at 1001 S. Olivesburg Road on the city's northeast side has 2,332 inmates and 396 employees, 147 of whom live outside Richland County. Positive test results are assigned to the patient's county of residence.

The inmate's parents said RICI prisoners are receiving no medical treatment for symptoms, that the corrections staff is short-handed and working 15-hour days, and that sanitizing is not being done because there is insufficient staff to do it. The parents also said there is no way to actually quarantine inmates in the open bay-style prison.

"He is trying to make people aware of what is really going on," the inmate's mother said. "There is no one monitoring the inmates ... they are not being properly cared for. It's a violation of their civil rights."

The parents live out of state and said they have not seen their son since December 2019.

"He was doing what he could to keep his spirits positive. He was working on his college degree, trying to keep focused on that. Now he is just feeling so down and depressed," his mother said.

Smith said the entire RICI population undergoes daily symptom screening and individuals who exhibit symptoms are placed in medical isolation or the infirmary and provided any necessary treatment. If hospital level care is necessary, they are transferred either to a local medical facility or The Ohio State University Medical Center for treatment, she said.

As of Friday, Smith said, 28 individuals from RICI are currently hospitalized -- 26 at The Ohio State University Medical Center and two at a local healthcare facility. She said 16 of those inmates are in ICU units and seven are on ventilators.

She also said the prison commissary has an "ample supply of over-the-counter medications," and the prison received a delivery of such items Thursday.

"Medical staff also provide symptomatic individuals with medication during the daily symptom screening or during medical sick call/appointment if they exhibit symptoms - including fever, congestion and upset stomachs," Smith said.

The ODRC spokeswoman said illness among prison staff has led to employees being assigned to different posts within the prison.

"Staff are provided adequate PPE and undergo symptom screening before being permitted to enter the facility," she said.

"The facility follows an aggressive cleaning and disinfecting plan, which includes cleaning high-touch areas at least once every 30 minutes, additional cleaning supplies are available in the living areas and hand sanitizing units are refilled immediately as needed," Smith said.

As of Thursday afternoon, the ODRC reported 75 RICI staff members at the prison (about 18 percent of the total workforce) have tested positive with 19 recoveries, leaving 56 active coronavirus cases.

The ODRC reported 71 current positive tests among inmates with 24 tests pending and 24 inmate recoveries. The state also reported 90 inmates in isolation and 2,157 in quarantine.

Richland County met six of the state's seven indicators on Thursday, earning a "red," or level three, status, while also being placed on the state's "watch" list. If conditions do not improve, the county could become the first in Ohio to become "purple" on Oct. 8.

Since the Public Health Advisory System was launched by the state in July, no county has been rated purple. There was no such system in place during earlier prison outbreaks in Marion and Pickaway counties that resulted in a combined 37 deaths and more than 3,000 inmates testing positive.

So what happens if Richland County becomes purple? There is no hard-and-fast rule, according to Ohio Department of Health spokeswoman Melanie Amato.

"There could be stay-at-home orders requiring people to only go out for supplies and other necessities," she said, adding final decisions would be a combined state/local decision.

She said there could be some ordered business closures, but it's "not automatic."

Richland Public Health educator Reed Richmond said the system is an assessment tool, not a guideline.

"If we were to indicate purple next Wednesday, there would be a conversation with the governor's office prior to that determination being announced (Thursday)," Richmond said.

"That would include Richland Public Health staff, county commissioners and possibly other officials, to determine how extensive the spread was and what measures might be considered prudent or necessary."

Richmond said public comments on social media indicate local residents are blaming the worsening spread only on the prison.

"The governor's recommendations (regarding gatherings and events) are not being followed," he said. "The gist is, 'It's just a recommendation, it's not prohibited.'"

On Thursday, RPH Commissioner Sarah Humphrey said the question county residents need to be asking is what they can do to slow the spread of coronavirus.

“What can I do to help reduce the spread of COVID-19 virus, to help businesses, schools, athletics, and everyday life from being disrupted further, and to simply keep those who may not be as healthy as themselves not end up sick, hospitalized, or worse?” Humphrey said. “It is going to take our community, working together, to change the trajectory of COVID-19 in Richland County.

“This includes wearing masks when necessary, social distancing, staying home when sick, and not to hold unnecessary family and social get-togethers. Right now, a common focus is to keep children in the schools safely, in an environment where we know they thrive. In order to do this, we all need to recognize the role we play in keeping others healthy and simply do our part."