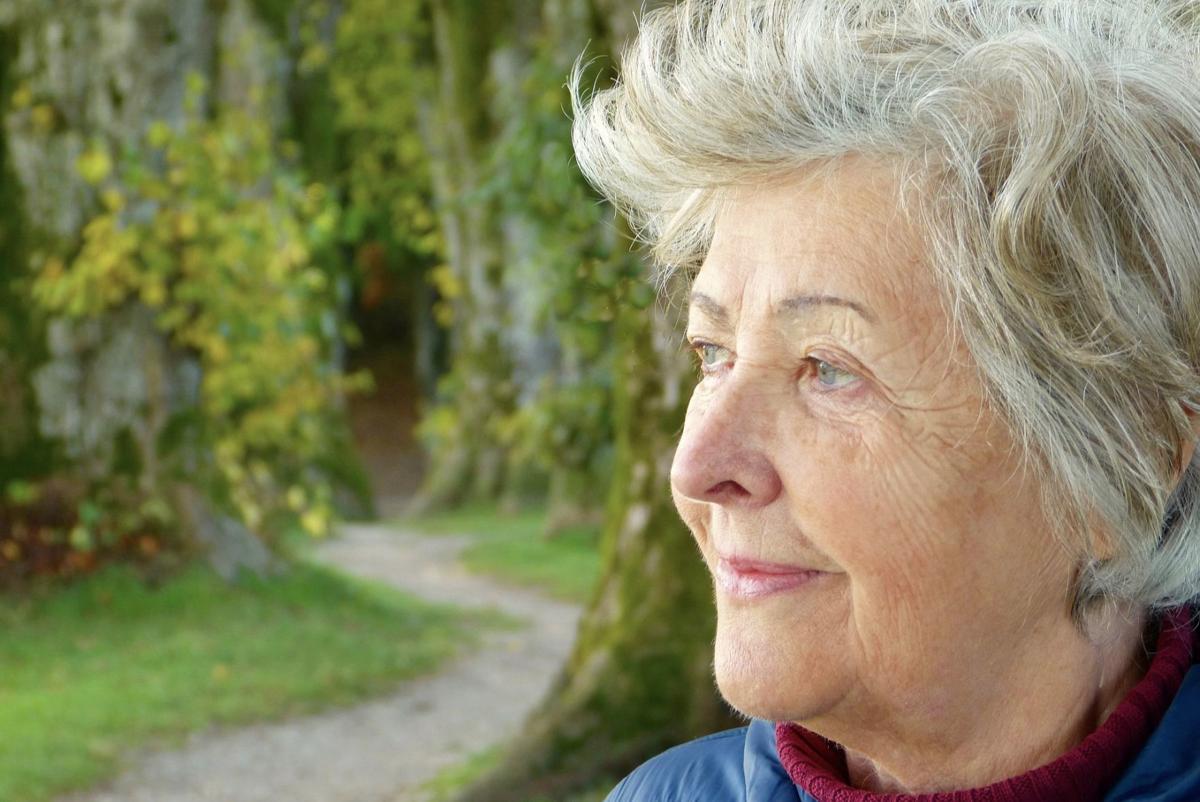 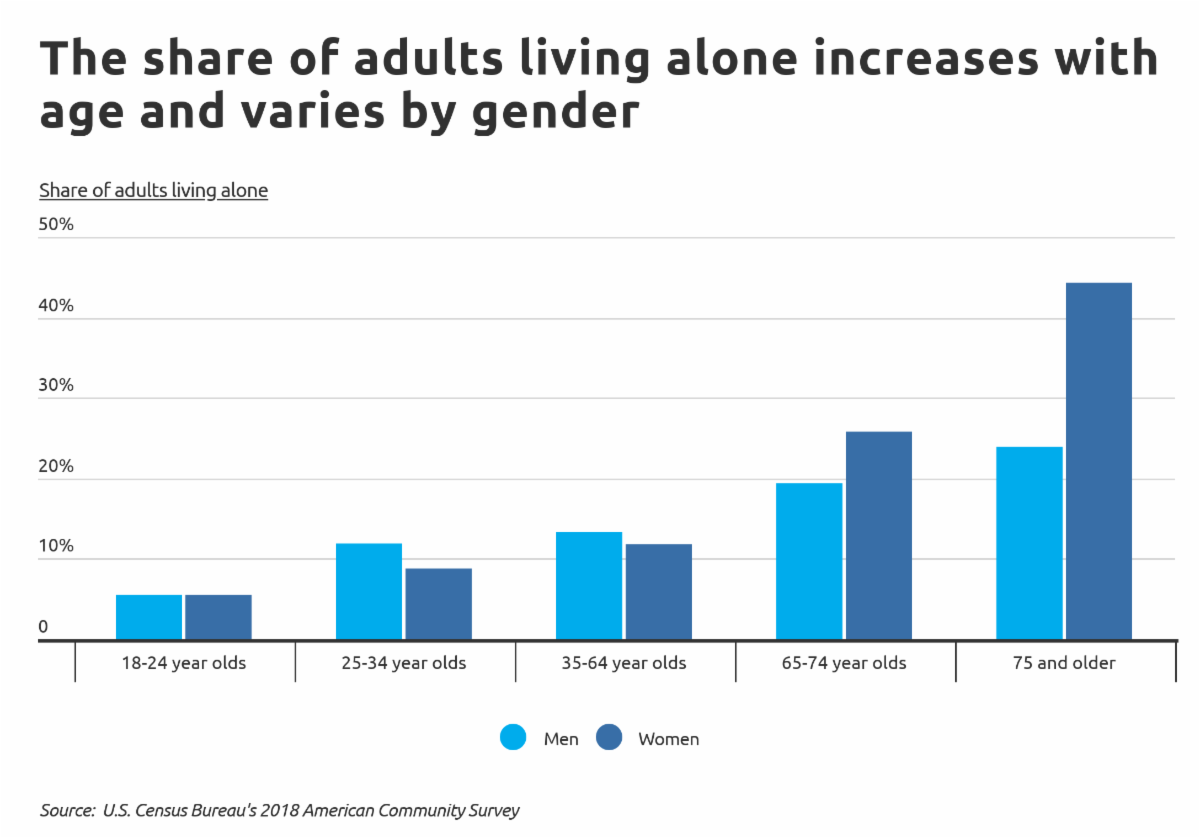 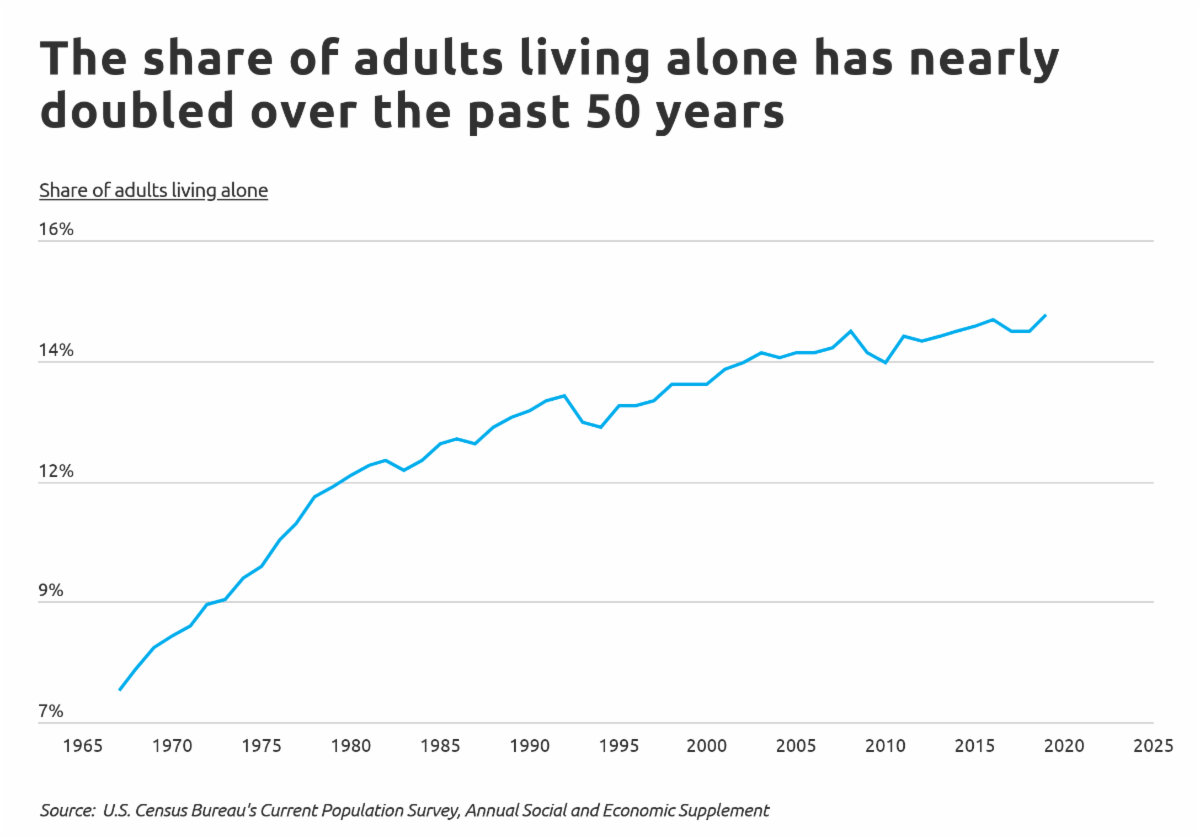 COLUMBUS -- A new study has found that lockdowns triggered by the coronavirus pandemic may be especially hard on Ohioans, as the state has the third highest percentage of adults living alone in the United States, according to figures from the U.S. Census Bureau.

As the coronavirus pandemic continues, millions of Americans are hunkering down at home. Working from the kitchen table, homeschooling, and attending virtual happy hours have become the new normal.

But for the 34 million adults who live alone in the U.S., the pandemic and economic downturn bring a unique set of challenges, both financial and psychological.

Data from the Census Bureau’s Current Population Survey (CPS) was compiled and analyzed by Self Financial. Obviously shelter-in-place and social distancing orders can amplify loneliness for people who live by themselves. At the same time, those suffering job losses and other financial hardships can’t rely on a significant other or roommate to help cover essential costs.

The study revealed 34 million single-person households in the United States. In Ohio, 1,458,452 adults live alone, which is 16.6% of all adults in the state.

The study shows the share of adults who live alone has nearly doubled in the last 50 years. In 2019, 14.6 percent of adults lived by themselves. The rise of single-person households is due to a variety of factors, including rising incomes, migration from rural areas to cities, and increased female labor force participation.

The original report can be found here, and includes a table with data on more than 300 cities and all 50 states:

The survey listed cities by size of population:

Among those categories, in large cities Cleveland is No. 1 in the nation at 28.5 percent of people living alone, that includes 47.4 percent of households with one resident and 82,023 adults living alone.

Columbus is 15th in the country at 19.3 percent in the large cities category, that includes 35.5 percent of households with one resident and 130,034 adults living alone.

Dayton is the No. 1 small-sized city in the United States with the most people living alone, at 27.5 percent.

Nationally, nearly 15 percent of people live alone. However, the share of people who live alone varies considerably across different locations and among different demographic groups, making certain populations more at risk of financial distress and feelings of social isolation during the pandemic.

Americans over 75 are the most likely age group to live alone, largely as a result of spouses or domestic partners passing away. People aged 18 to 24, on the other hand, have the lowest rates of living alone, given that many individuals in this younger age group either still live with their parents or live with roommates to save money.

With regard to gender, men aged 25 to 64 are more likely than women to live by themselves, but this trend reverses for individuals over age 65. Differences in age at first marriage, likeliness to remarry, and life expectancy explain much of the divergent trends in living patterns for men and women.

Patterns of adults living alone also vary significantly by location. At the state level, North Dakota has the largest share of adults who live by themselves at 18.2 percent, while Utah has the smallest share at just 8.9 percent. Ohio, Maine, and Vermont also have high rates of people living alone, all at nearly 17 percent. Hawaii and California, states with high living costs, join Utah in having much lower shares of adults who live alone, at 10.4 and 10.5 percent, respectively.

To determine the states with the most adults living alone, researchers at Self Financial analyzed the latest data from the U.S. Census Bureau. The researchers ranked states according to the share of adults 18 years and over who live alone. Researchers also looked at the percentage of households with one resident, the total number of adults living alone, median personal income, and median monthly housing costs.

The analysis found that 1,458,452 Ohio adults live alone, which is 16.6% of all adults in the state. Ohio has the 3rd highest percentage of adults living alone among all U.S. states. Here is a summary of the data for Ohio:

Percentage of adults who live alone: 16.6%

Percentage of households with one resident: 31.1%

For reference, here are the statistics for the entire United States:

Percentage of adults who live alone: 13.8%

Percentage of households with one resident: 28.0%

For more information, a detailed methodology, and complete results for all states, you can find the original report on Self Financial’s website.