MANSFIELD -- It seems like a lifetime ago, but Ohio thought it would have an election last Tuesday.

State health director Dr. Amy Acton, just hours before Ohioans were to begin voting in person, ordered the polls not to open in response to the COVID-19 outbreak.

Her decision late in the evening on March 16, coming hours after Gov. Mike DeWine lost a court bid to have the election halted, effectively threw the state primary into an unprecedented tizzy.

For Richland County Elections Director Paulette Hankins, whose staff should be enjoying another successful effort today, the future of the primary remains uncertain.

The local elections board met Friday, but final answers will have to come from Columbus via Secretary of State Frank LaRose and/or the Ohio General Assembly, which actually sets election dates under the state constitution.

"We are having limited access to our office for the public and encouraging citizens to conduct business with our office as much as possible over the phone or online," Hankins said. "Our office will still be open 8 a.m. to 4 p.m. daily, but with staggered shifts for our employees.

"We were ordered not to have early voting anymore for this election. And we can't start issuing absentee ballots until after March 27, which would have been the deadline for us to receive mailed ballots that were postmarked by the 16th. We can accept absentee request forms now, but cannot actually mail out the ballots yet."

Lawmakers return to work this week and may consider LaRose's Ohio Voters First Act, which would grant his discretion over in-person voting on June 2 and/or perhaps create a vote-by-mail option.

In a letter to lawmakers on Saturday, LaRose said June 2 is the earliest by which a fair primary election can be concluded.

"Despite speculation to the contrary, June 2 is the earliest date ... due to the logistical realities of conducting a vote-by-mail election, the ever-evolving health realities of protecting against the spread of coronavirus and the sacred responsibility we have as public officials to preserve the integrity of our election," LaRose said in the three-page document. 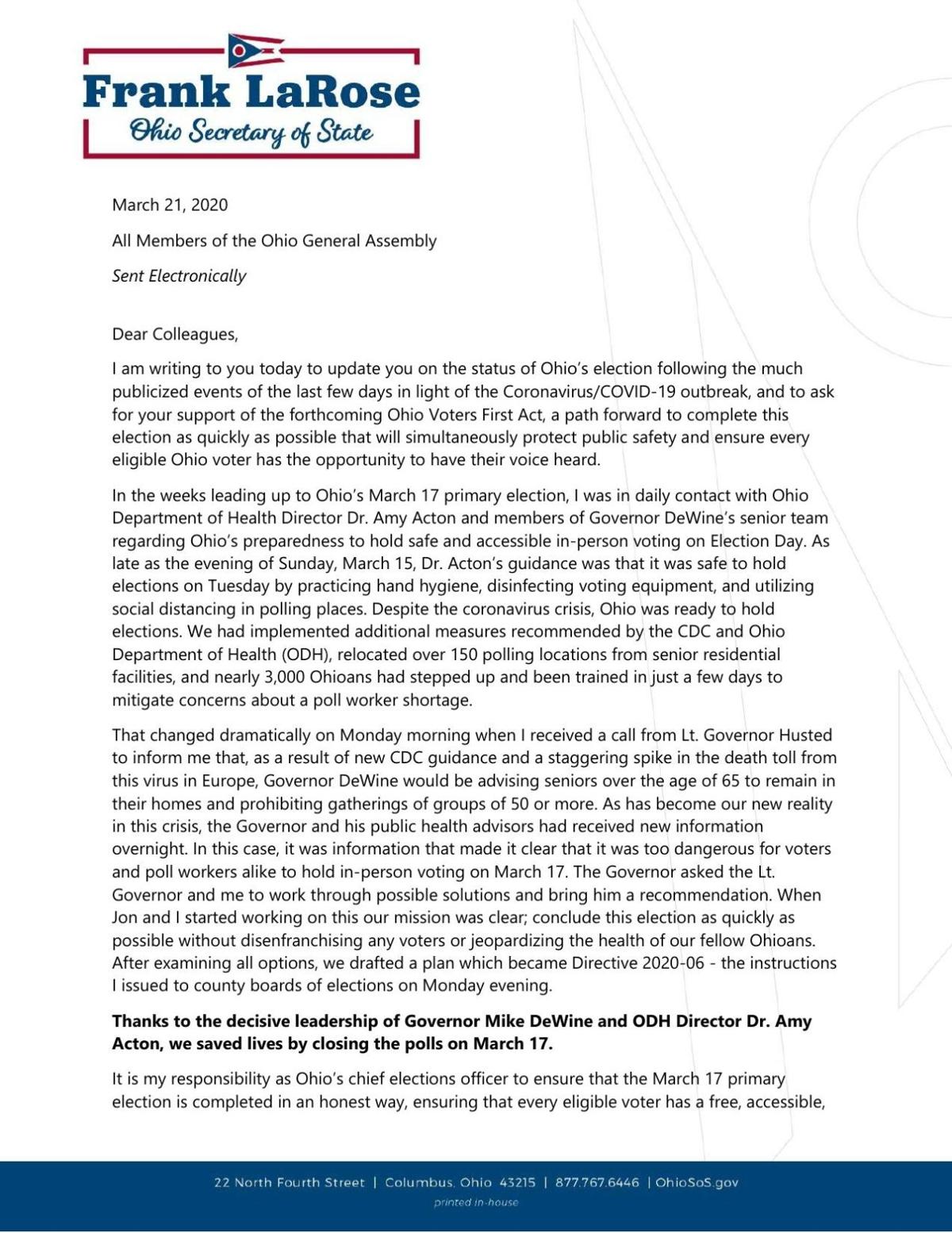 According to LaRose, completing the primary by June 2 would allow the vote to be certified in time for delegates to be determined for the Democratic National Convention.

A former lawmaker, LaRose said he understands the separation of powers between the legislative and executive branches of government.

"However, our system of government elects executive officers and empowers them to make decisions in a crisis, and that is exactly what occurred on (March 16)," LaRose said.

He said it was not feasible for the governor to summon lawmakers at the final hour to set a new election date.

"I respect that only the legislature has the authority to change the date of an election. That is why I didn't change the date of the election -- which would have exceeded the powers of my office," LaRose wrote. "March 17 was primary election day, but a public health emergency necessitated that the polls not open on (March 17), effectively extending the March 17 election through June 2."

LaRose is asking lawmakers to allow him to produce and mail a postage-paid absentee ballot request form to every eligible Ohio voter who didn't cast a ballot during the state's early voting period from Feb. 18 through March 16.

He also is asking for "discretion" to hold in-person voting on June 2 if Acton's order is no longer in place by April 24.

"We can all be confident that (DeWine) will sign the plan into law and that the plan we place into the Ohio Revised Code can withstand legal challenge," LaRose said.

The secretary of state said if lawmakers enact a plan that is not feasible, they may create the worst-possible scenario.

"A plan that sets unattainable timelines for mailing absentee requests to voters, or calls for inadequate procedures for ensuring every voter has an opportunity to cast a ballot at no charge, would likely fail a legal challenge," LaRose said.

After a week in which his national image skyrocketed in his decisions to protect Ohioans against the COVID-19 outbreak, Gov. Mike DeWine found himself and his administration embroiled in an elections controversy Monday night.