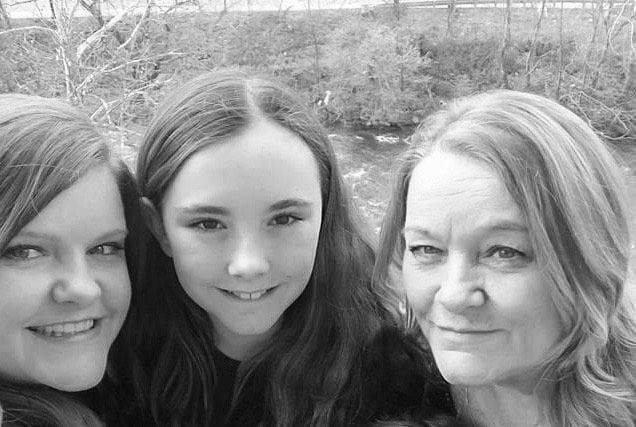 Heather Yeichner, left, poses in a photo with her mother, Diana Stumpf, center, and her daughter. Yeichner and Stumpf both became infected with and recovered from COVID-19. 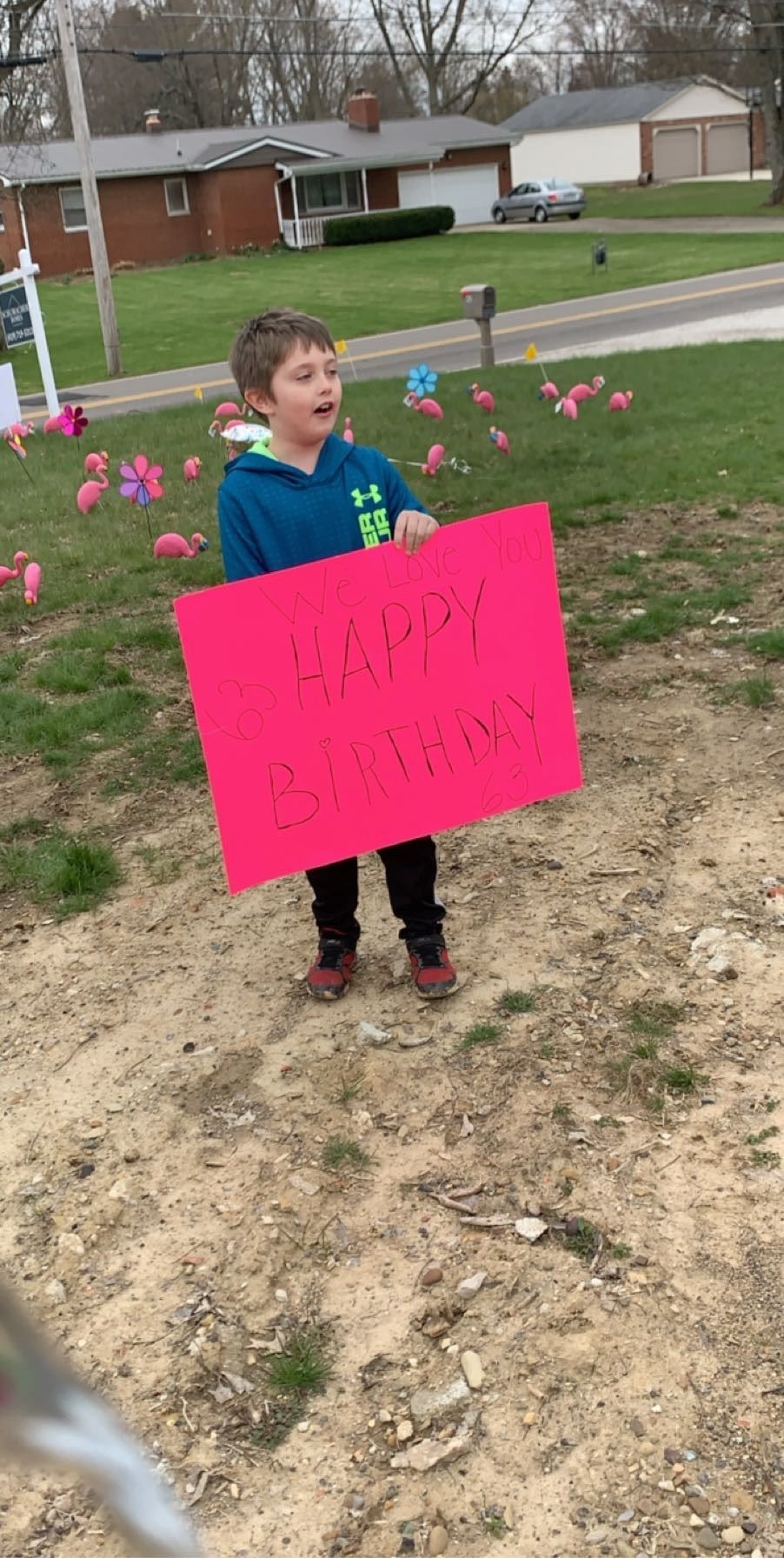 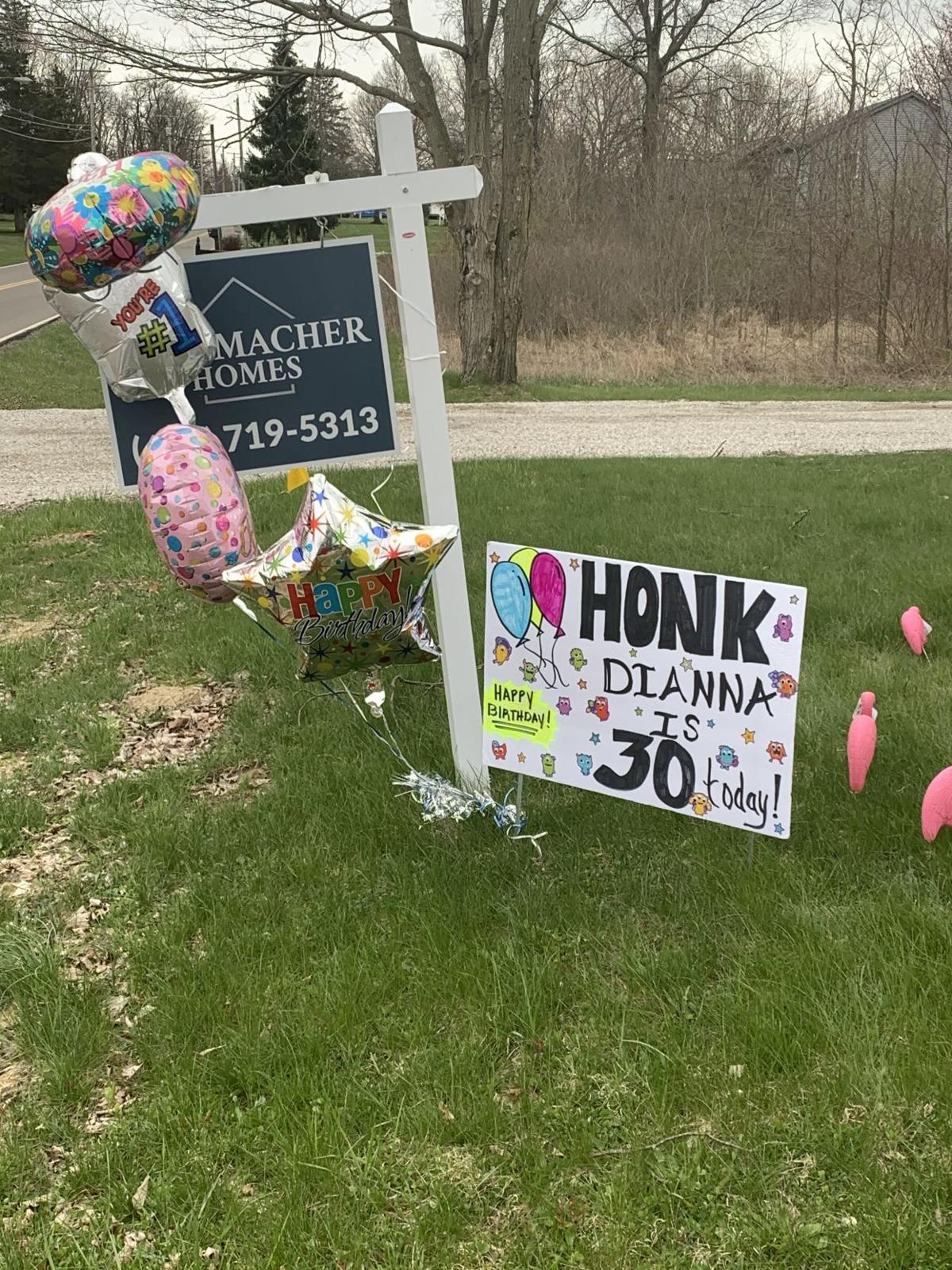 Dianna Stumpf recently celebrated a birthday in quarantine after recovering from COVID-19. Her children and grandchildren decorated her lawn with signs to cheer her up. 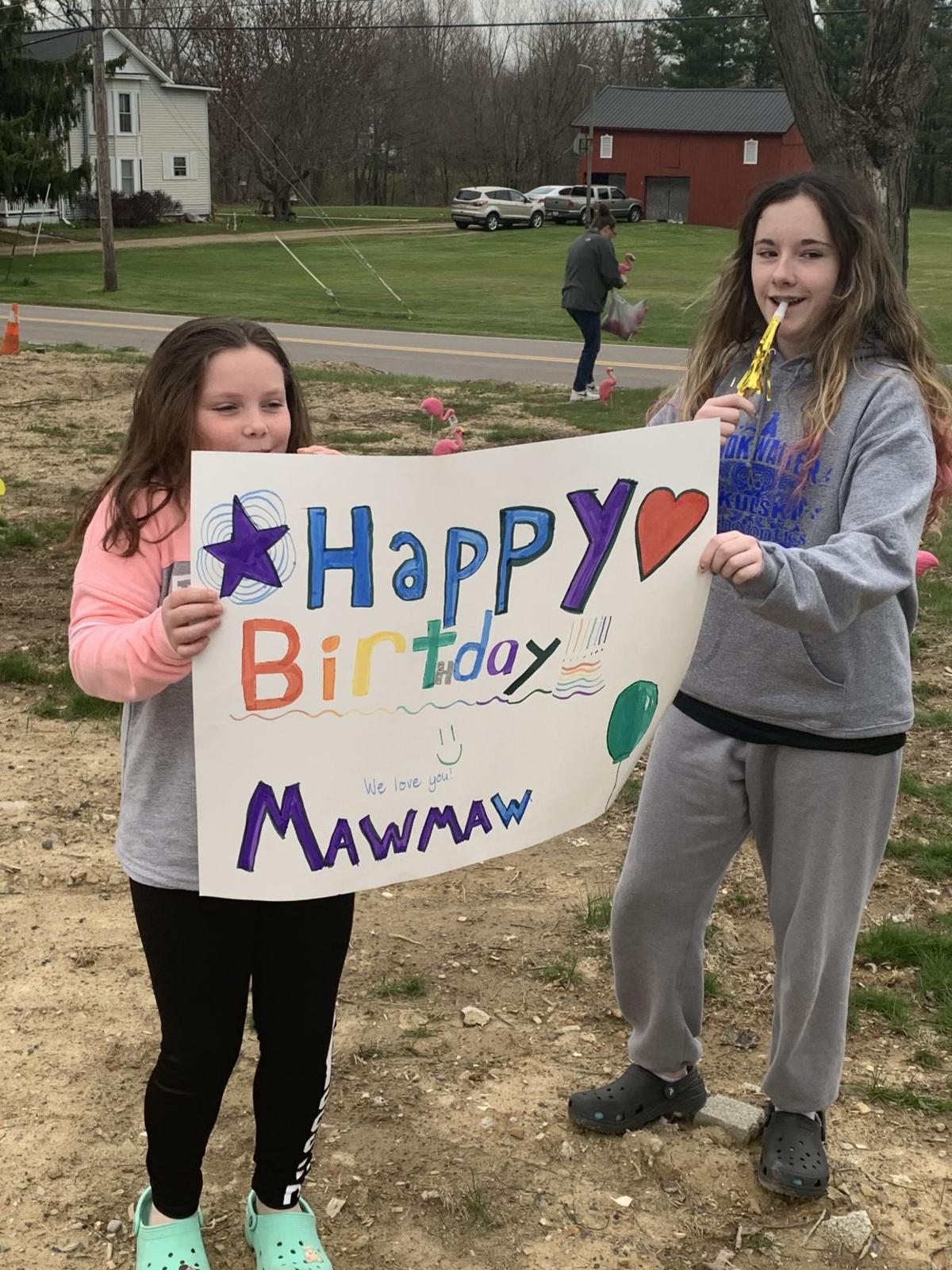 Heather Yeichner's daughters hold up a homemade sign for their grandmother, Dianna Stumpf, during a quarantine-style birthday visit. 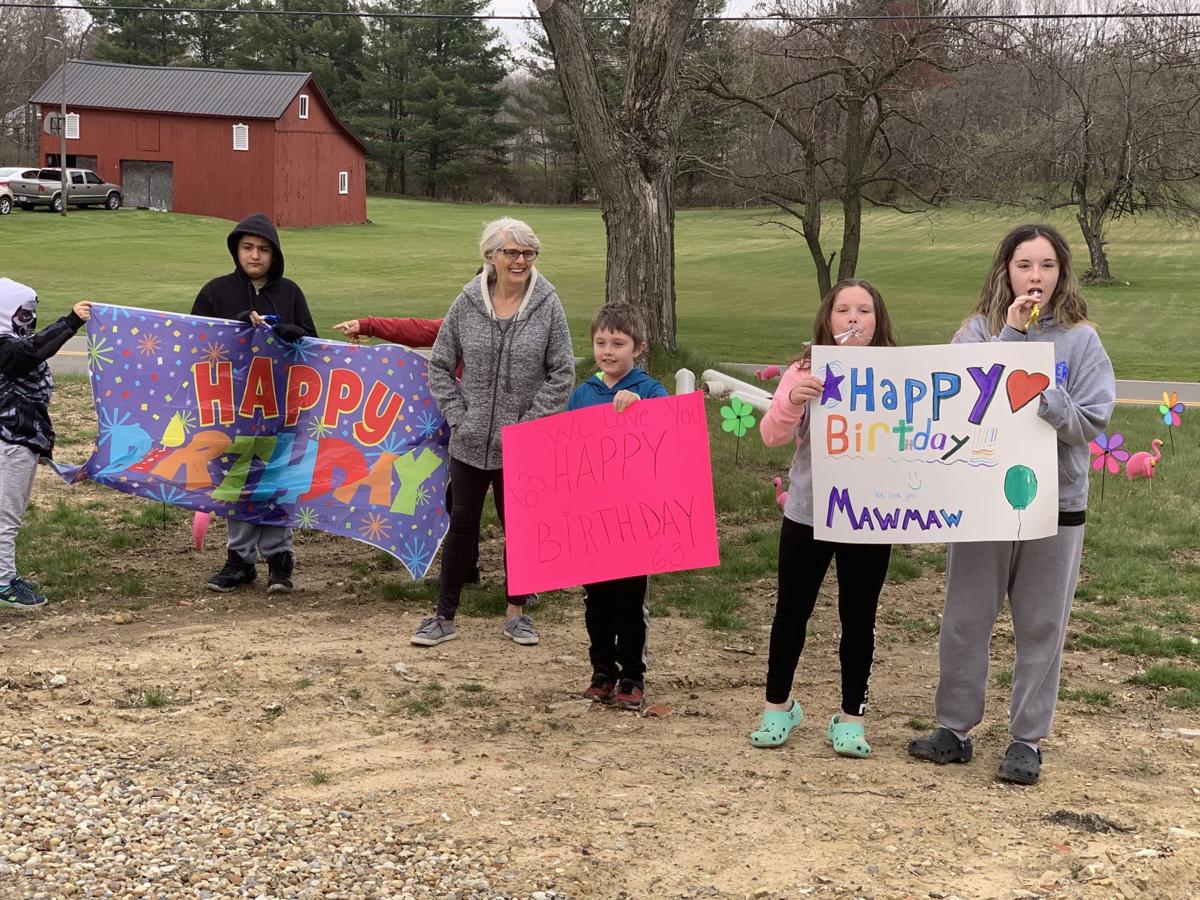 Dianna Stumpf's family gathers outside her home to wish her a happy birthday. Stumpf recently recovered from COVID-19 and spent her birthday in quarantine.

MANSFIELD -- Heather Yeichner’s body was weak, but inside, she was fighting. The mother of two inhaled through an oxygen mask as she lay in bed, confined to the hospital's COVID-19 wing. One thought kept her going.

“All I wanted was to see my kids again,” Yeichner said. “That was my motivation.”

The Mansfield resident is a single mother with two daughters, a registered nurse and director of operations at a local home health care agency. She started experiencing symptoms of COVID-19 on March 13 and wondered if she was coming down with a respiratory infection.

“I didn’t know what was happening,” she said. “The virus was kind of still new to the area.”

The next day, she went ahead with plans to go shopping and out to dinner with her mother, Dianna Stumpf, in Columbus.

“She just didn’t feel real good, her stomach, her head and that kind of stuff,” recalled Stumpf, who is also a registered nurse and home health care administrator. “We really didn’t give it much thought.”

After returning from the shopping trip, Yeichner discovered she had a fever and decided to self-quarantine. Just a few days later, Stumpf came down with a low grade fever and didn’t feel well, so she self-quarantined as well.

At first, Stumpf suspected it was a sinus infection. But her symptoms worsened.

“The following week, my fever went up,” she said. “Then I had a cough, severe headache, body aches and I kind of figured I knew what it was.”

“It was unlike any illness I had ever had,” Yeichner said. “The fatigue is so unreal to the point where you can’t even get out of bed.”

Yeichner drove herself to the OhioHealth Shelby hospital on March 21 and was transferred to OhioHealth Mansfield’s COVID-19 floor the next day, where she was tested for COVID-19. She spent three days in medical isolation before being discharged with bilateral double pneumonia on March 24. Her COVID-19 test results were still pending.

Yeichner said she was among the first Richland County residents to be tested, and that the results were being run through a lab in North Carolina. She didn't get confirmation of a positive test result until April 4.

Dr. Gavin Baumgardener, Vice President of medical affairs at OhioHealth Mansfield and Shelby Hospitals, said the testing process has been a journey.

"We worked hard through challenges of a lack of testing supplies, as well as slower turnaround times as we waited for results from external laboratories," he said. "We began in-house testing at OhioHealth in early April, where turnaround times went from days to hours."

While her daughter was in the hospital, Stumpf’s symptoms were worsening at home. Her sense of smell and taste were gone. She couldn’t hear. She had raging headaches. She knew she was dehydrated, but she lacked the energy to eat or get out of bed.

On March 28, she donned an N95 mask and drove to the emergency room at her doctor’s recommendation.

Hospital personnel listened to Stumpf’s lungs with a stethoscope and took her blood pressure (it was high). After bringing up her pre-existing conditions, including diabetes, thyroid issues and high blood pressure, Stumpf was also tested.

“They weren’t going to test me. I had to more or less argue with the hospital,” she said. “They did the test and they sent me out the door.

“So I came home and I continued to go downhill.”

On March 31, both the hospital and the health department called Stumpf to let her know she had tested positive for COVID-19.

A worried relative contacted Stumpf’s primary care doctor, who called her via Facetime on April 1 and ordered her to get out of bed and get to the hospital.

“I remember saying, ‘I can’t do that,’” Stumpf recalled. “He said, ‘You will do that. I want you up. The hospital will be waiting for you.’”

It took Stumpf an hour and a half to gather her things and make her way to the hospital, where she said she was treated with the utmost respect by hospital staff.

“It was the best care I could have asked for,” Stumpf said. “They took me in the emergency room and there must have been five or six people in that room working on me and I was shocked.”

Like her daughter, Stumpf had to go on oxygen but was never on a ventilator. She was given antibiotics through an IV machine and rehydrated. The day after coming off of oxygen, she insisted on going home to care for her husband, who has moderate Alzhiemer’s disease. She feared he also had COVID-19.

“I was to the point where they were probably going to discharge me soon anyways,” Stumpf said. “As a nurse, I knew I could finish my treatment at home, but I had to come home and take care of him.”

“I got home, my husband was definitely positive for COVID,” she continued. “We didn’t need to do a COVID test and waste a test for it. He had all the symptoms.”

In the midst of her own recovery, Stumpf had the strength to care for herself and her husband. She set timers and kept a steady regimen of fluids, ice packs and medications -- waking every four hours for her husband and every six hours for herself.

“The first two days I thought I was going to end up back in the hospital because I was totally exhausted,” she said.

Nevertheless, both Stumpf and her husband are now on the way to recovery and have avoided trips to the hospital.

Stumpf and Yeichner still have residual symptoms, including shortness of breath, fatigue, a cough and short-term memory issues.

“I found out (searching for words) is a symptom and it’s supposed to go away with time, but I do lose my words quite frequently,” Yeichner said.

Both Yeichner and Stumpf described having COVID-19 as a frightening, isolating experience.

“People don’t realize how lonely an illness like this is because you can’t have anybody with you," Yeichner said. “I think that was probably one of the hardest parts was being alone through all of it.

“Everyday I'd wake up and try to convince myself that my symptoms were gone so it was okay for my kids to come. I would have to talk myself out of the thought of them coming home because I just wanted them to stay safe.”

“It doesn’t mean it's a life sentence. It means that it’s created enough anxiety, enough fear that they may be less likely to go out in the community for fear of getting it again," Trolian said. “There’s lots of good treatments for post traumatic stress, starting with just reaching out and talking to people.

“If you know people that are sick, reach out. Even if it's just to say, 'Hey, how are you doing? I’m thinking of you.”

Yeichner, Stumpf and her husband have all been cleared to end quarantine. But Stumpf isn’t quite ready.

“I have been in quarantine since March 17,” Stumpf said in a phone interview April 27.

She’s made one nerve-wracking trip to the grocery store and has started working from home, but wants to wait for a bit longer after her husband recovers before returning to the office.

“He’s doing great today. His memory has come back, to a certain extent,” she said. “This virus took a part of him that I don’t think we can get back.”

Stumpf is eager to see her family and return to work.

“I have stayed in quarantine even though the doctor said we’re fine to be out of quarantine. I miss my grandkids so much. I can’t wait til the day when I can just give them a hug. But until that time I’m okay blowing kisses to them.”

Yeichner was also cautious about resuming contact with her daughters. They stayed with their father even after Yeichner was discharged from the hospital, coming home after she’d been symptom-free for a week.

“I was still afraid to hug them or have contact with them because of the fear of them getting it and knowing that if they went to the hospital I couldn’t be with them,” Yeichner said.

Despite the trauma of the last few weeks, both women are thankful to be home.

“Heather and I, we’re truly blessed that we’re here today, that we can tell our story and speak to our families," Stumpf said.

As Ohio begins the process of "reopening" this week, both mother and daughter remain cautious.

“It scares me to death," Stumpf said. “I’ve seen the protestors, they want it open and I don’t agree. But my fear is higher than most people."

“If they are going to open things back up, slowly, I just hope people keep in mind all the things that they have learned throughout this time of being quarantined," she added. "Wash your hands, still continue to keep that distance. And understand this is not gone. It’s still here. People can't just go about their life the way it used to be.”

“I want people to know -- have a healthy fear of it, but don’t let the fear overwhelm you," she said. "We still have to live life, but maybe do it a little more cautiously now."