MANSFIELD -- A second inmate death at the Richland Correctional Institution is listed as "probable" for COVID-19, according to the Ohio Department of Rehabilitation and Correction website.

Also, three more staff members and two inmates at the Mansfield Correctional Institution have tested positive for coronavirus since Thursday, according to the ODRC website.

The RICI inmate who died was an 80-year-old man who was sentenced in 2015 to six years in prison on two counts of felonious assault and vandalism in Cuyahoga County, according to the ODRC.

The inmate became ill and was transferred on Sept. 23 to The Ohio State University Medical Center. He died on Oct. 8. 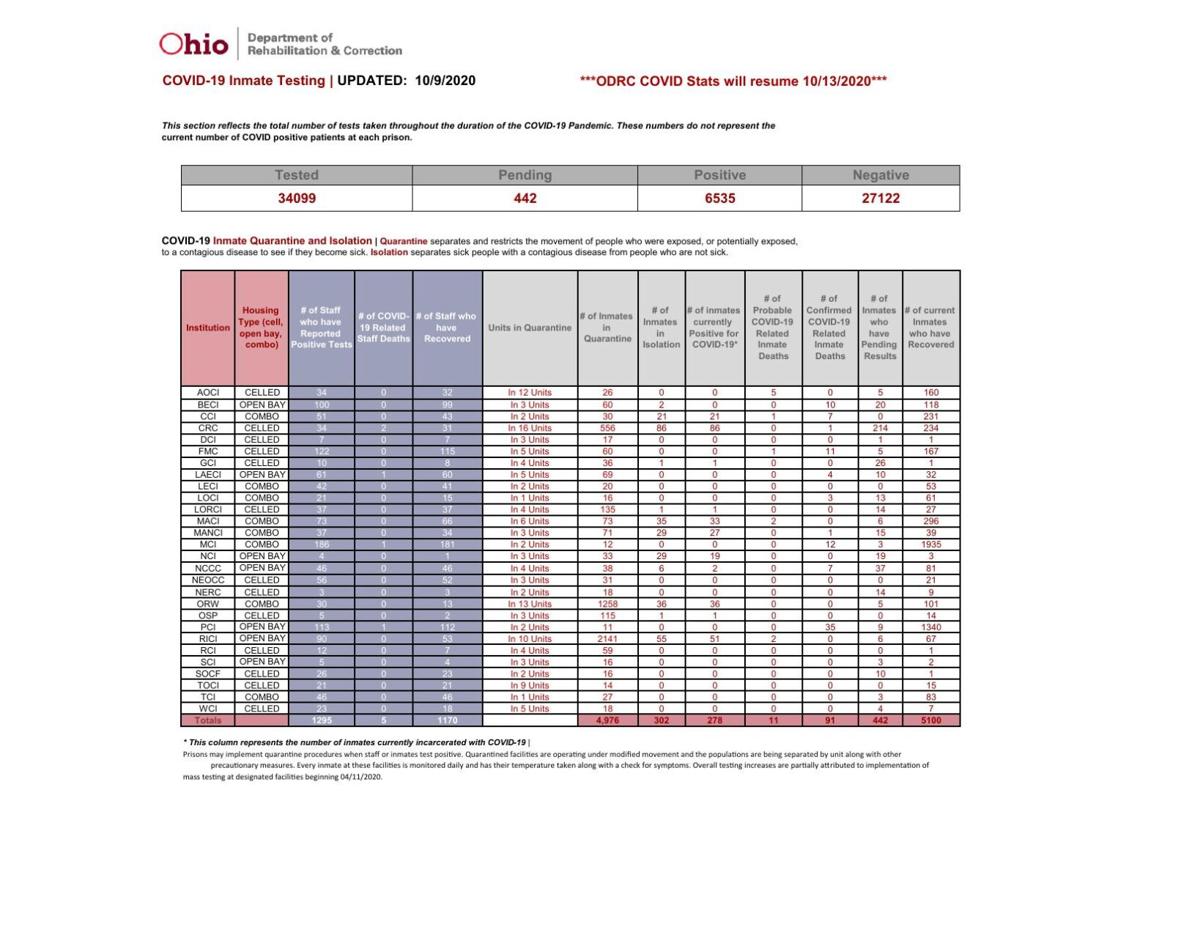 If confirmed, it would be the third RICI/MANCI inmate to die from COVID-19. MANCI has had one confirmed death due to the virus, a 56-year-old inmate who died July 14. He had been in the prison since 1992, serving a sentence for aggravated murder from Summit County.

The first RICI death occurred Oct. 6 when a 76-year-old inmate died at The Ohio State University Medical Center, according to ODRC spokeswoman JoEllen Smith. The inmate entered RICI in January 2018 after being convicted of attempted rape in Cuyahoga County.

According to the ODRC website, last updated Friday, 51 RICI inmates are currently positive for COVID-19 with results from six tests pending. That's down from 60 inmates on Thursday as the ODRC reported eight additional inmates have recovered.

The ODRC said 2,141 inmates were in quarantine Friday, down three from Thursday. There are 55 inmates in isolation, down from 64.

There are 37 active COVID-19 cases among RICI staff -- 90 positives and 53 recoveries, up from 39 recoveries on Thursday. No new positive tests were reported among staff at the 1001 S. Olivesburg Road open-bay prison.

At MANCI, there are three active COVID-19 cases among staff, all new since Thursday. There have been 37 positive tests among MANCI staff since the pandemic began, with 34 recoveries.

There are 27 current positive cases among MANCI inmates, up two since Thursday.

The website lists 71 inmates in quarantine, the same number as reported Thursday. There were 29 in isolation, up two from Thursday. There are 15 tests pending and still 39 recoveries.

The recent death of a Richland Correctional Institution is listed as "probable" for COVID-19, according to the Ohio Department of Rehabilitation and Correction website.