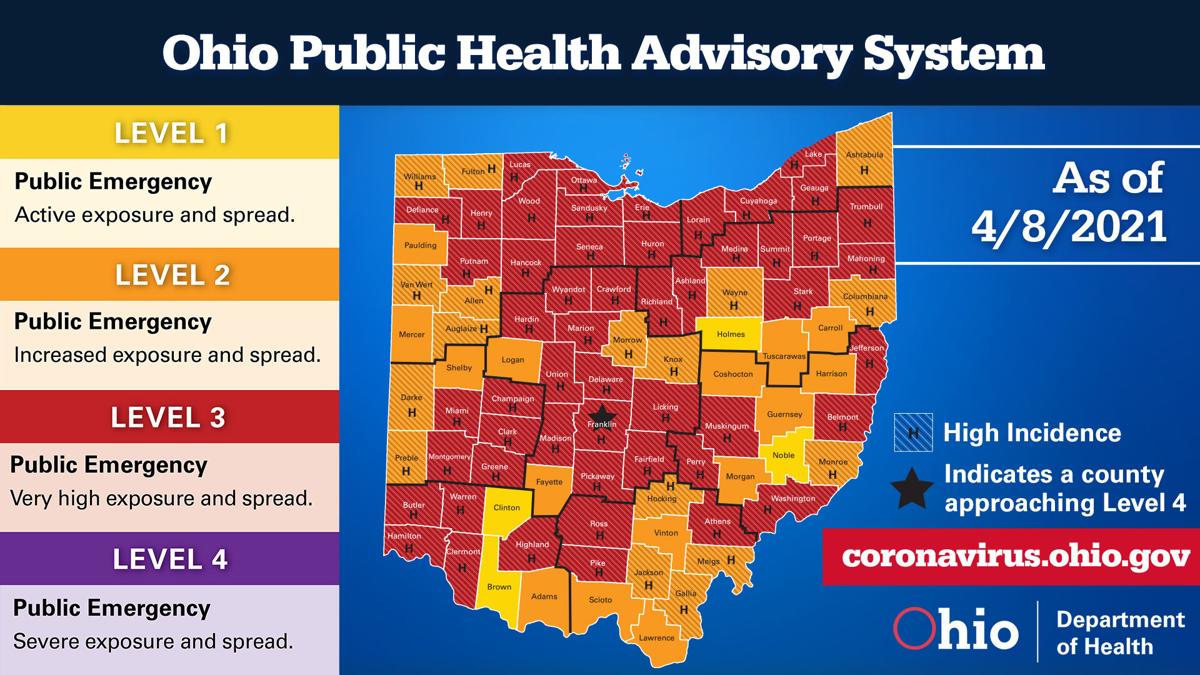 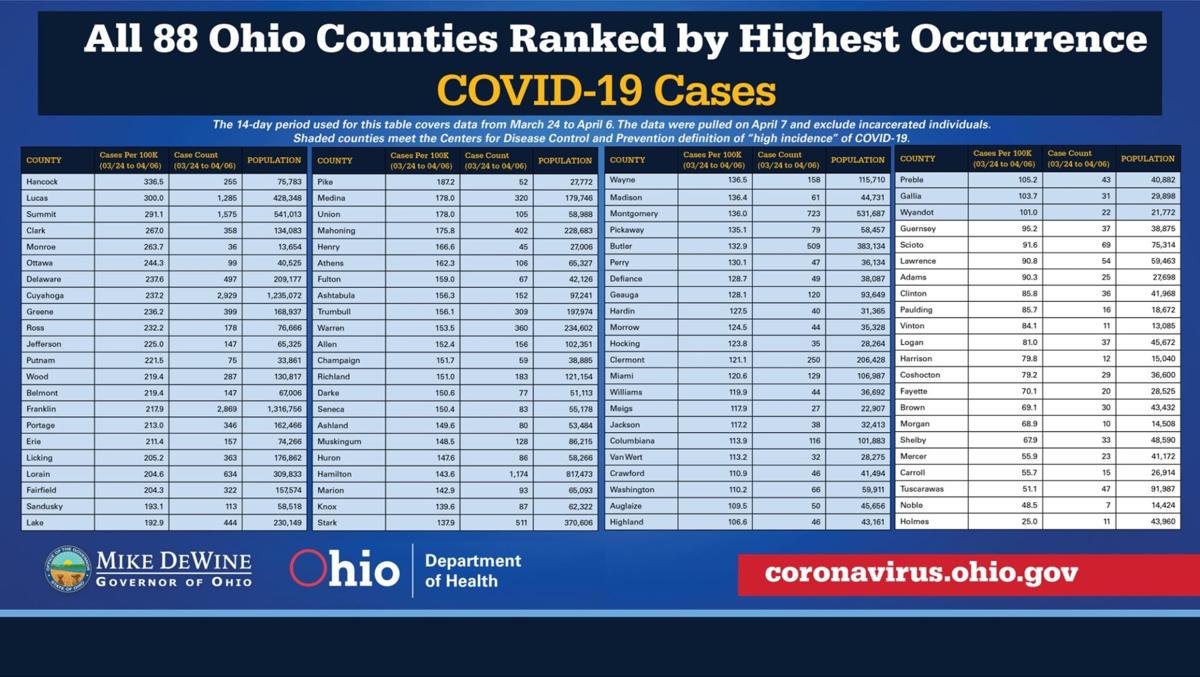 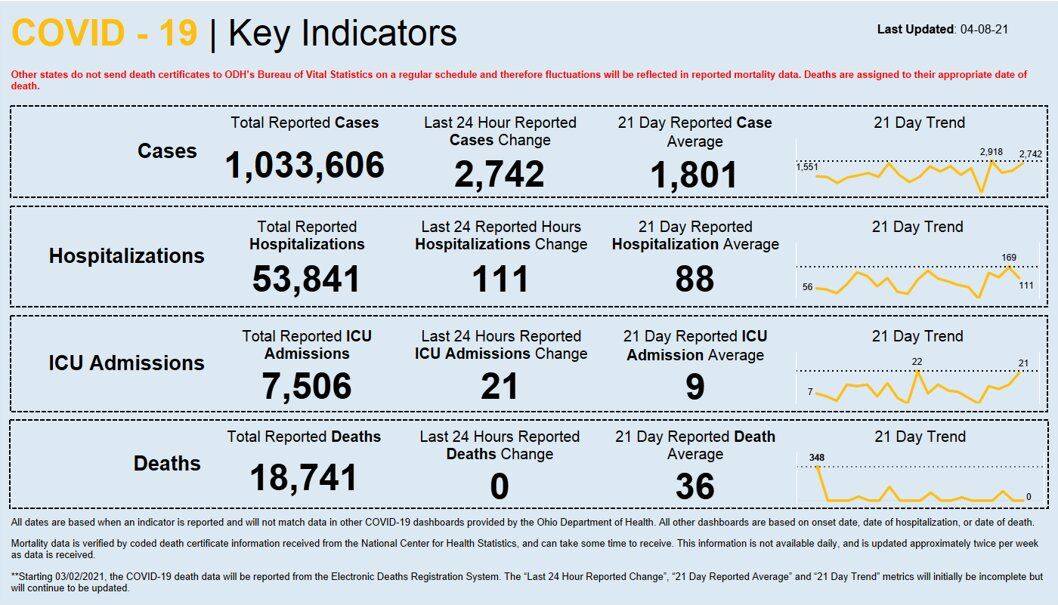 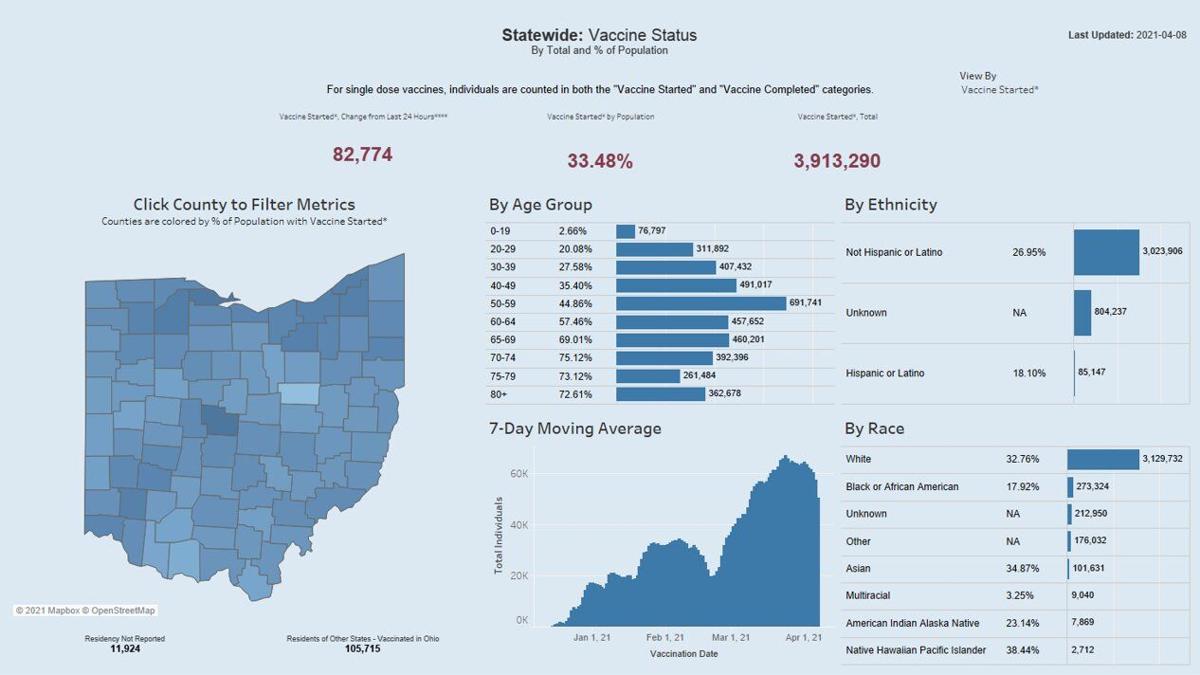 COLUMBUS -- Richland County, just two weeks ago, was on the verge of improving to "orange" in the state's COVID-19 Ohio Public Health Advisory system.

It could have been the county's first "non-red" rating since Oct. 15.

Two weeks later, the numbers of new infections -- and two other key indicators -- are all headed in the wrong direction, according to the Ohio Department of Health.

In addition, the county triggered state indicators for COVID-related emergency room and outpatient visits for the first time in about four months.

Those two, in addition to new cases and new cases found in non-congregate care, means the county triggered four of the seven indicators in the state rating system.

For ER visits, a county meets the indicator if it records at least five consecutive days of inctease in the number of visits to the emergency department with COVID-like illness or a diagnosis over the last three weeks.

Between April 2 and April 6, Richland County had daily growth in ER visits, going from six visits in a two-week average to 8.86 visits.

Similarly, the outpatient visit indicator is triggered if a county records five consecutive days of growth in the number of people going to a health care provider with COVID symptoms who then receive a COVID confirmed or suspected diagnosis over the last three weeks.

Between April 2 and April 6, Richland County had daily growth in outpatient visits, going from 11.5 visits in a two-week average to 17 visits.

Richland County's worsening numbers match an increase in COVID cases around the state even as Gov. Mike DeWine announced Thursday that one-third of Ohio residents have received at least one dose of the vaccine.

On March 12, when the statewide number had dipped to 155 new cases per 100,000 residents, DeWine announced all statewide restrictions, including a facemask mandate, would be lifted when the rate dipped to 50.

Numbers have gone up weekly since then.

"The statewide average is also going up and away from our goal of 50. We can still turn this around if people continue to get vaccinated," the governor said Thursday during a press conference.

As of Thursday, in Richland County, 32,246 residents have had at least one dose of the vaccine, or 26.6 percent of the population.

During the press conference, Dr. Bruce Vanderhoff, the state's chief medical officer, said COVID-19 variants are increasing around the nation and Ohio. He said the variants are more contagious and more deadly.

"Our variant counts jumped from 92 on March 12 to 797 today. That's a doubling time of about every nine to 10 days. Ohio remains in a very important race against the virus and its variants. We can win the race if we continue to press on with consistent masking and getting the vaccine," Vanderhoff said.

COVID-19: Richland County on the verge of improving to 'orange' in state system

Richland County is on the verge of improving to "orange" in the state's COVID-19 Ohio Public Health Advisory system for the first time in six months.