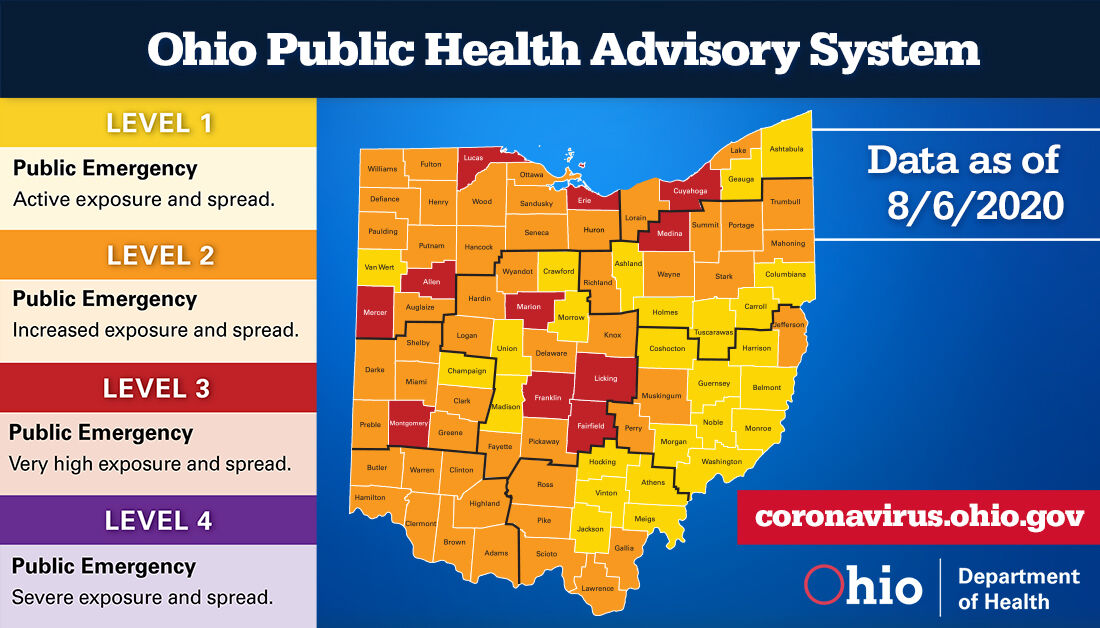 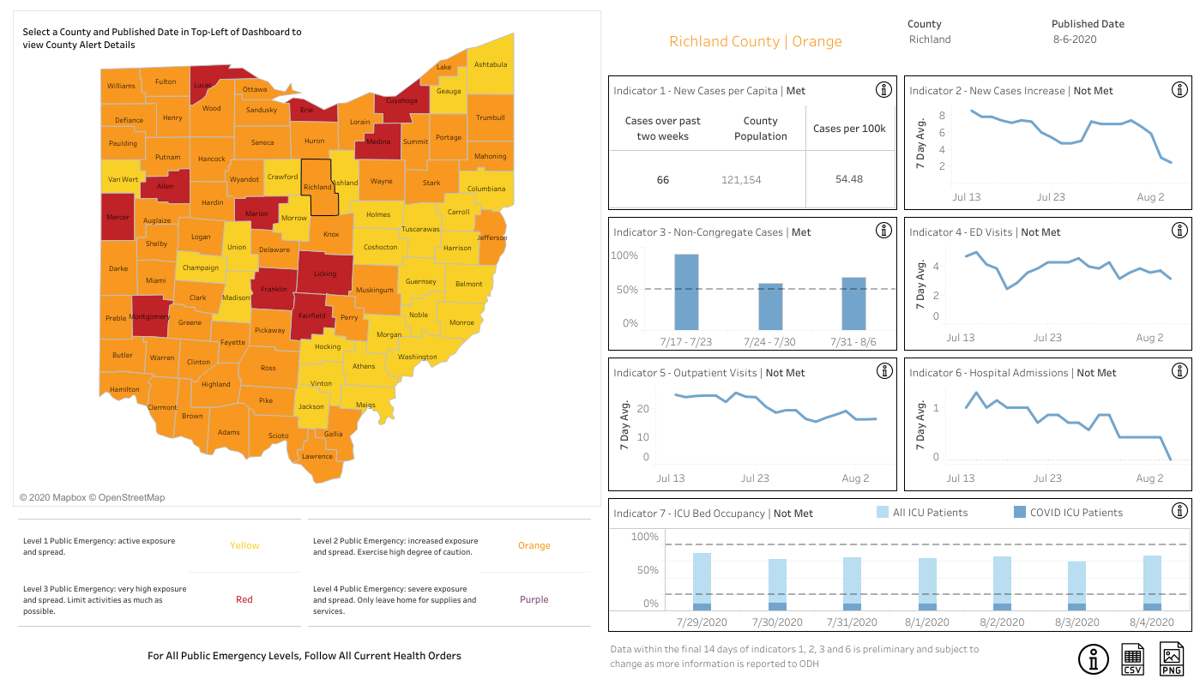 Orange, or level two, is indication the spread of coronavirus has worsened in the county during the past week, according to the Ohio Department of Health.

Richland County has moved like a COVID-19 pinball since the system was put in place several weeks ago, spending the first two weeks at orange, the next two weeks at red and then yellow last week.

According to the ODH, eight counties moved in the wrong direction this week, including Mercer, which went from orange to red. Seven counties, including Richland, went from yellow to orange.

Ten counties improved from orange back to yellow.

Mercer County had the highest case rate per capita in Ohio at 262.3 cases per 100,000 residents over the past two weeks. The daily new cases increased from an average of three per day in early July (July 11) to an average of 10 per day at the end of July (July 31).

Richland County "triggered" two of the seven indicators in the system this week -- new cases per capita and proportion of cases found in non-congregate settings.

The other five indicators all trended down in the county this week, according to the PHAS data on the state website Thursday.

The county reported 64.29 percent of the new cases were found in non-congregate settings. That's a slight improvement over the nearly 66 percent reported last week, but still well above the "trigger" level of 50 percent.

Here are the five indicators that were not met this week in Richland County:

Sustained increases in new cases -- The state has said it doesn't want to "flag" a county that may have experienced just a one-day increase. Richland County on Aug. 3 had 20 new positive tests, while seeing much lower results on other days.  This measure looks at the increase using a seven-day moving average of new cases. A county is flagged on this measure if there is at least a five-day consecutive period of sustained growth. Richland County saw a steady decrease in this category from 7.43 on July 31 to 2.43 on Aug. 4.

Sustained increases in emergency room visits -- A county is flagged here when there is an increase over a five-day consecutive period using a seven-day moving average. The county has declined in this area from 4.29 on July 29 to 3.14 on Aug. 4.

Sustained increases in outpatient visits -- A county is flagged when the there is an increase over a five-day consecutive period using a 7-day moving average. Richland County declined here from 17.86 on July 31 to 16.29 on Aug. 4.

Hospital admissions -- A county is flagged when there is at least a five -day consecutive period of sustained growth with a seven-day moving average of new hospital admissions. Richland County declined here from 0.43 on July 31 to zero average on Aug. 4.

Statewide, ODH reported 1,166 new positive tests in the last 24 hours, which is 114 below the 21-day average of 1,280. The state also reported 22 deaths (three below the average), 135 new hospitalizations (38 above the average) and 18 ICU admissions (one above the state average).