On May 15, DeWine said, hair salons, barbershops, day spas, tanning facilities and nail salons can re-open. The governor said restaurants and bars can re-open for outside dine-in service on May 15 and inside dining on May 21.

All of those businesses will have to comply with state guidelines on social distancing and other precautions, said DeWine, adding that 89 percent of the state's economy will be re-opened on Tuesday when retail establishments open their doors again.

(See attached PDFs for details on the state's guidelines for re-opening.) 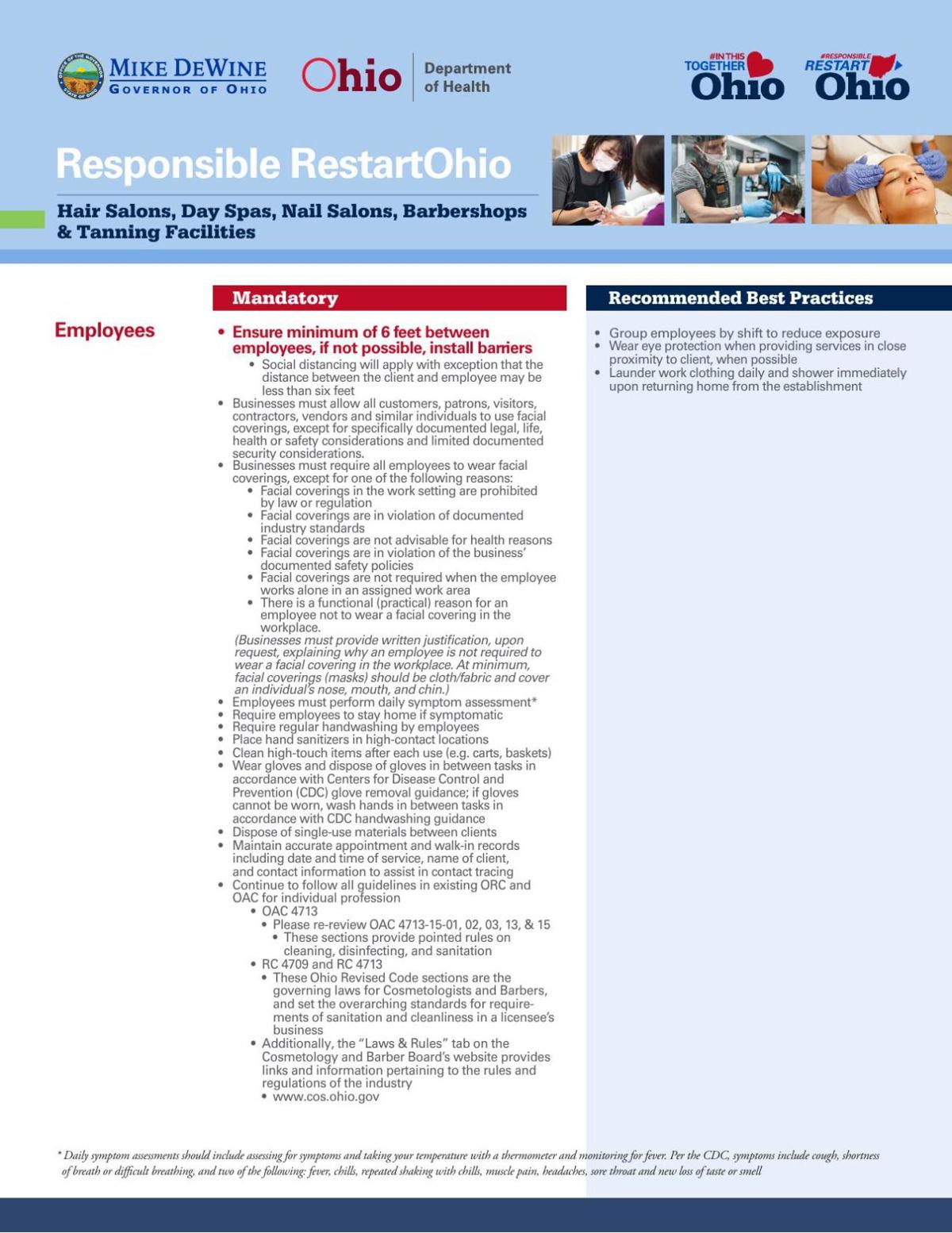 DeWine, wearing an Ashland University tie during the press briefing, said he would have an announcement Monday about childcare re-opening dates. There was no announcement about gyms and fitness centers, as well as campgrounds.

DeWine said working groups of health professionals and those involved in the personal services and restaurants/bars had worked together to develop best practices that allow them to re-open.

He cautioned state residents not to let down their guard.

"If we relax and take things for granted, things will not go the way we want them to go. We don't want to see a spike and be forced to decide if we pull back again on the economy. What we all do today will determine where the state goes. This is all in our hands," DeWine said. 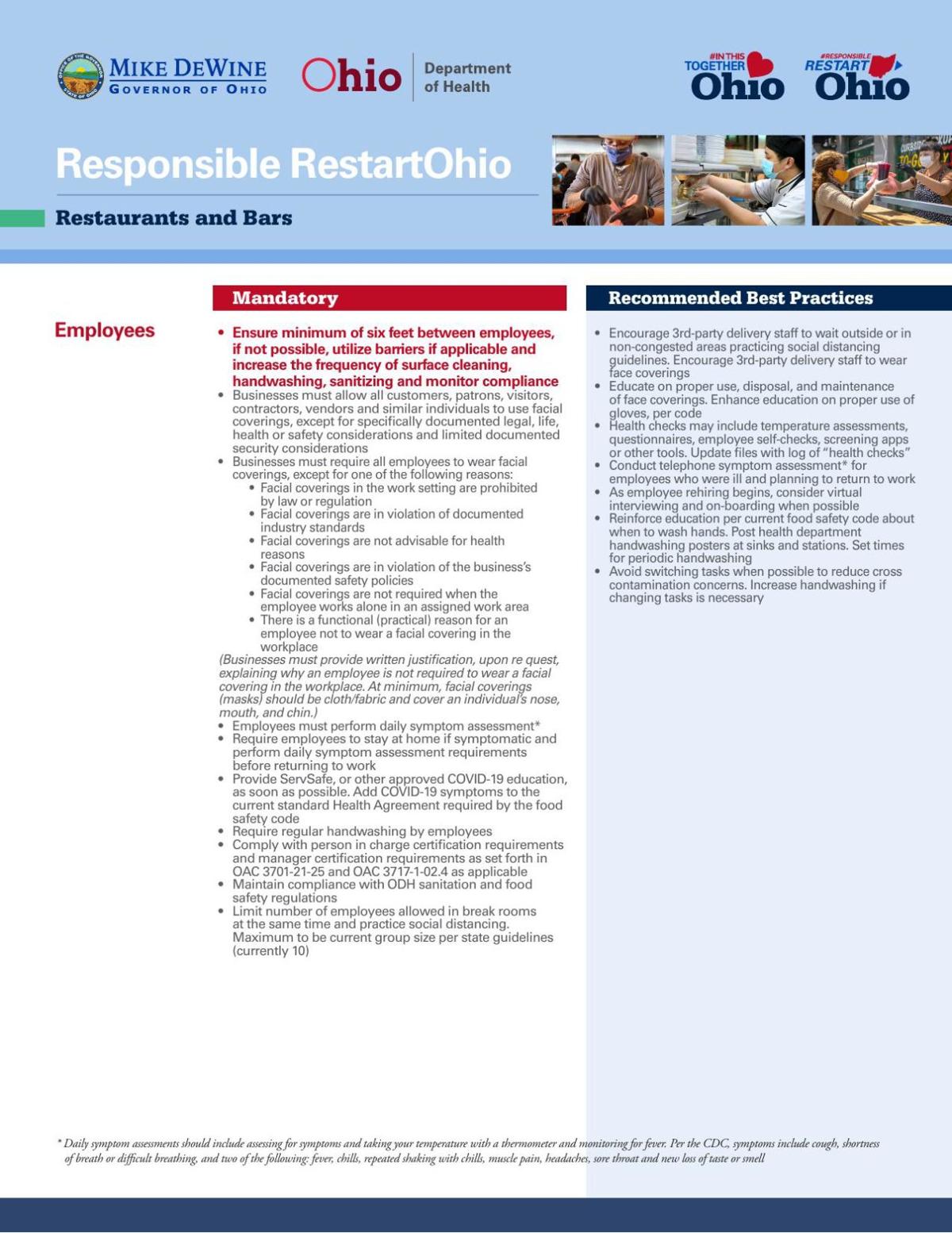 Dr. Amy Acton, the state's health director, was asked if agreed with the decisions announced Thursday.

"I will not lie to you ... these are very difficult decisions to make. This is a new playbook. We have not traveled this road before. We have to learn how to live with this virus," Acton said.

During questioning, DeWine agreed these are difficult decisions to make, measuring health risks against economic woes. The state announced on Thursday morning that 1.1 million new unemployment claims have been filed since the shut-down began in mid March.

He said the state's health decisions to this point had set businesses up in a place to succeed, but again cautioned residents and companies.

"It's a gamble. We're on a road that has never been traveled before in Ohio. It's a road with danger signs on it. The danger is that we relax and pull back. That we say. 'Ok, things are better, we don't need to distance," DeWine said.' 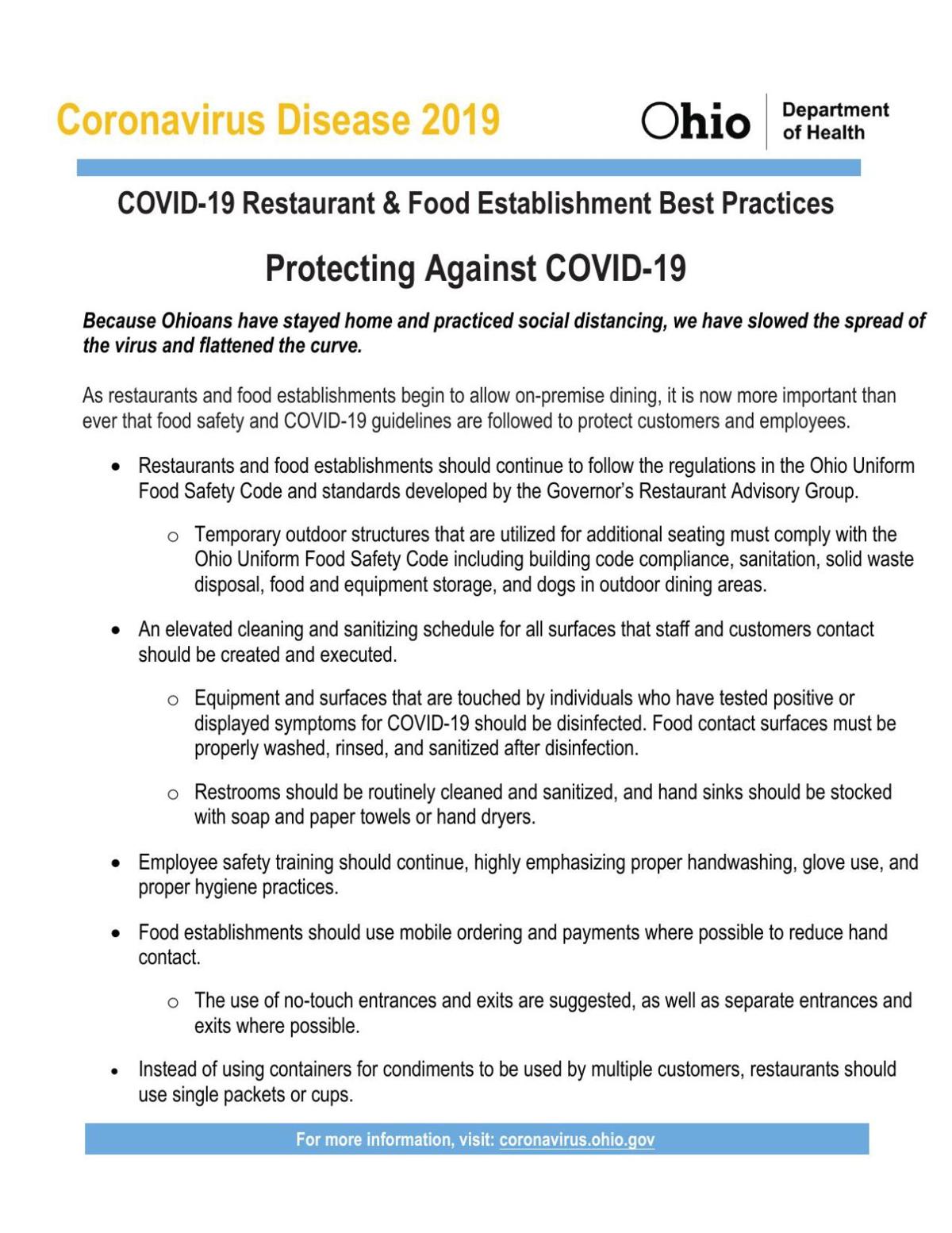 "What I ask you to do in our individual lives (and collectively) is to make those calculated risks and good judgments. Your decisions will help our economy and keep others safe," he said.

Also on Thursday, the state announced there were 554 new coronavirus cases and 46 additional deaths. It raises the number of confirmed and probable numbers to 1,271 deaths and 22,131 cases with 4,140 cumulative hospitlizations.

According to Richland Public Health, Richland County has 90 confirmed positive COVID-19 cases with four probable cases. There have been 24 hospitalizations, 12 of which spent time in ICU, and two deaths. RPH said 67 people on the cumulative list have recovered.

The governor also said he would veto a bill approved by the Ohio House on Wednesday that would "strip away" powers of the state's health director, should the Senate approve it.

Ohio Gov. Mike DeWine announced Monday he was not yet ready to say when childcare centers around the state can re-open during the COVID-19 pandemic.

Two local state lawmakers agreed no actions taken by the legislature on Wednesday will immediately re-open the Ohio economy.