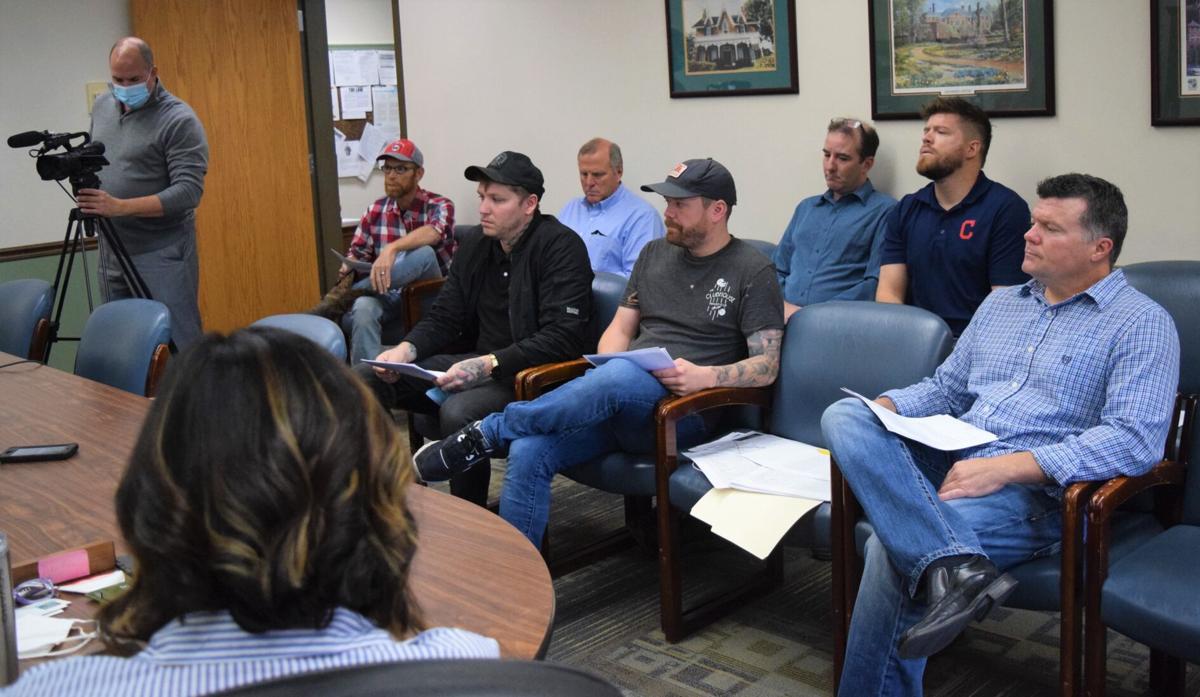 A group of local bar and restaurant owners told Richland County commissioners on Tuesday morning that the 10 p.m. restrictions ordered by Gov. Mike DeWine in response to COVID-19 are crippling their businesses.

Above is a chart showing the rate of positive Ohio COVID-19 tests since the pandemic began.

MANSFIELD -- Tom Zellner told Richland County commissioners on Tuesday it feels like Ohio Gov. Mike Dewine has singled out the bar business in the battle against COVID-19.

Zellner, joined by other local bar/restaurant owners, presented a petition signed by 32 local owners, seeking an end to restrictions imposed by the governor at the end of July that ban alcohol sales after 10 p.m. and order bars closed at 11 p.m.

"There is no science behind the State of Ohio's magic time of 10 p.m. that shows COVID-19 cases increase after that hour," Zellner said. "These current restrictions have been catastrophic to many businesses in our region and if they continue, we fear will lead to the closure of many more businesses in our county."

The local owners, most of whom have state-issued licenses allowing them to remain open until 2:30 a.m., indicated gross revenue losses ranging between 20 and 60 percent since DeWine imposed the restrictions through the state's Liquor Control Commission.

"These restrictions and time constraints are literally destroying our businesses," Zellner said, adding he and his partners chose to open a downtown bar in recent years during a time when local business was booming with momentum.

Bars and dine-in restaurants were among the "non-essential' businesses ordered closed by DeWine in March when the pandemic reached Ohio. They were later allowed to re-open in mid-May at limited capacity.

On July 30, in announcing the time restrictions, DeWine said alcohol consumption tended to lower patrons' inhibitions, leading to a lack of social distancing.

"The problem is, bars, by their nature, lend themselves to a revolving door of people in close contact, oftentimes indoors. Patrons either stay at one location, sometimes for hours or bar hop. Either way, they interact with many different people -- especially the younger crowd,” DeWine said at the time.

Bar owners, however, said their employees are trained not to over-serve customers.

"We've been controlling those inhibitions as bar owners for years. I mean, have we not? So I don't understand why we can't do that in this current environment," said Ben Hoggard, general manager and executive chef at the Hudson & Essex in downtown Mansfield.

Bar owners said DeWine's rules have led to more dangerous habits such as people ordering multiple drinks just before 10 a.m. or leaving the bar at 10 p.m., purchasing alcohol, and engaging in large house parties with less monitoring than they would have had at the bar.

Commissioners Marilyn John, Darrell Banks and Tony Vero listened with sympathetic ears, agreeing with the local business owners, but saying DeWine has not been responsive to their questions and concerns since the pandemic began.

"These decisions are being made in one office in Columbus. They're not being made by anybody sitting at this table or anybody in this room," John said.

After the meeting, Commissioner Tony Vero sent an email to DeWine's administration, including the petition that asks for the restrictions to be lifted immediately or at least on Nov. 1 when the Liquor Commission is scheduled to review the order.

In his email, Vero called the governor's rule "capricious" and said DeWine has offered no accompanying science to support it.

"These (bar owners) are struggling to survive under an order issued at the end of July where the slight bump (not curve) occurred in Ohio in late April 2020. They also question (as do all three Richland County commissioners) how such a prohibition can remain in place while 1/10 of 1% of Ohio’s population has an active COVID-19 diagnosis," Vero wrote in the email.

"To date, 0.139% of the state of Ohio has such a diagnosis, and that has remained fairly unchanged (actually a small decrease) since the state finally started publishing recovery figures several months ago," Vero wrote.

Bar owners and commissioners agreed DeWine is not being truthful when he says the state is "98 percent" re-opened.

"I think it's very disingenuous," Vero said during the meeting. "And it's a disservice to owners of these types of establishments who are losing revenue. (DeWine) owes to them to provide them something tangible and quantifiable as to why  (the restrictions) exists. And I have yet to see it since the end of July."

-- approved a $305,620 project, using federal CARES Act funds, to digitize and create microfilm of records for county Clerk of Courts Lin Frary's office, using Kofile, the same company doing a similar project for the county recorder's office. The project will include records from 1900 to 1996, which is when the office began to become computerized. It will allow residents and others to search records online, reducing the need to visit the courthouse to obtain public records.

-- approved a mitigation project that will allow Dayspring to move forward with plans on replacing the slate roof at the century-old facility while also seeking a state historical grant to fix the roof at the laundry building, the oldest building on the county home property.