Judge Ronald Forsthoefel issued the ruling in a case brought against the Ashland County Health Department by Cattlemans Restaurant in Savannah, bringing to an end litigation that began in July 2020.

The restaurant was shut down by the ACHD for allegedly violating the "Dine Safe Ohio Order" issued by DeWine and the OHD as bars and restaurants were allowed to re-open for in-person dining during the COVID-19 pandemic. 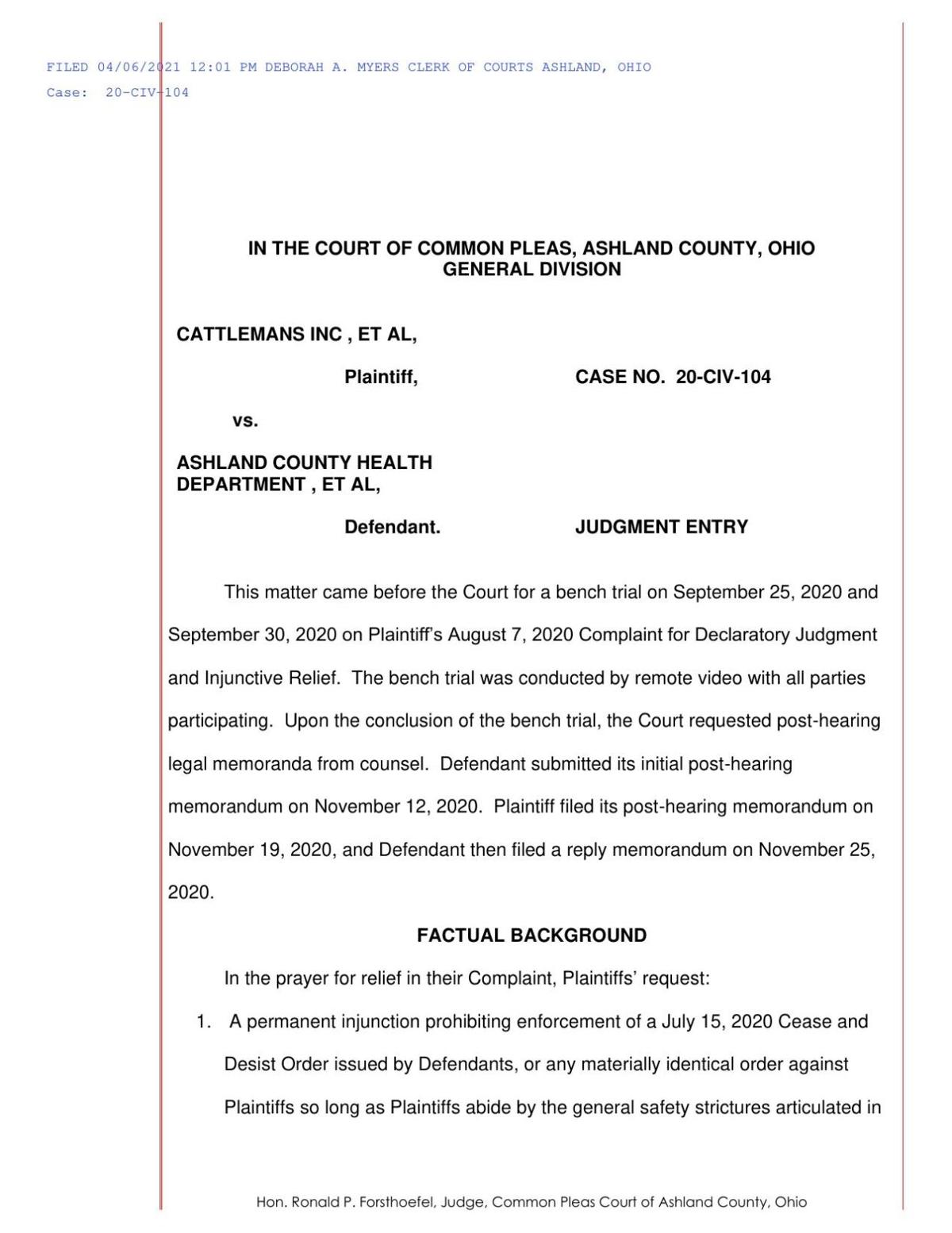 The ACHD had suspended the restaurant’s food service license July 15 after employees were observed without face coverings. The owner, Mandy Close, was ordered to cease and desist operations immediately.

In his latest ruling, the judge said ACHD had withdrawn attempts to stop the restaurant from opening. He therefore dismissed the restaurant's request for a permanent injunction, but assessed court costs to the local health department.

Forsthoefel, who issued a temporary restraining order that allowed Cattlemans to re-open July 25, said Ohio law (OCR 3701.13) doesn't allow  mandatory mask orders "since there is no stated or implied authority ... which authorizes any action to prevent the spread of contagious or infectious disease.”

The judge said under ORC 3701.13, the Ohio Department of Health only has ultimate authority in matters of quarantine and isolation.

“The Dine Safe Ohio Order in this case fails to accomplish anything scientifically demonstrable, or otherwise corroborated with empirical data, to prevent the spread of contagious or infectious diseases even if that purpose were authorized by R.C. 3701.13," Forsthoefel said in an eight-page ruling.

The judge said, "any further attempt to enforce mask restrictions will result in further restraint of any such attempt.”

The 1851 Center for Constitutional Law, which has successfully challenged pandemic health orders in several Ohio counties since COVID-19 reached Ohio in March, represented Cattlemans in the legal fight.

“The Court’s Order is further evidence that no statute permits Ohio agencies to overregulate all Ohioans over an extended period of time, and that if one did, it would violate the Ohio Constitution’s separation of powers,”1851 Center Executive Director Maurice Thompson said.

“The decision provides a roadmap for elected officials in other counties, who ultimately maintain the power to protect their citizens from the State’s arbitrary and continuous administrative overreach, since virtually all enforcement of these orders is undertaken locally."

In his ruling, Forsthoefel said the ACHD could only suspend the restaurant license without a hearing due to an immediate danger to public health.

"This Court finds and determines that 'an immediate danger to public health' was never factually established nor scientifically demonstrated in this case, nor in support of the actions of the Ashland County Health Department," the judge said.

"In those cases, the respective courts found the COVID-19 related orders of the Ohio Department of Health to be unconstitutional, whether authorized by R.C. 3701.13 or arguably R.C. 3701.14(A).

"While this Court generally agrees with the positions expressed by the common pleas courts of both Lake County and Erie County, it is more inclined to agree with the Erie County Common Pleas Court that R.C. 3701.13 grants no authority to the Director of the Ohio Department of Health to issue or enforce mandatory mask, social distancing, or other similar type orders since there is no stated or implied authority in R.C. 3701.13 which authorizes any action to prevent the spread of contagious or infectious disease (the orders’ express purpose)," the judge wrote.

Forsthoefel said he could not award damages to the restaurant stemming from the suspension.

"This case was initiated due to what this Court finds to be improper conduct on the part of the Director of the Ashland County Department of Health. However, the improper conduct has been cured and the ability of Plaintiffs to operate their food service establishment was reinstated. ... This Court has no authority to award damages in this matter," the judge wrote.

A Savannah restaurant recently shut down by the Ashland County Health Department due to violations of the "Dine Safe Ohio Order" can re-open Saturday morning.