"The numbers for the state are on a slight uptick," Commissioner Tony Vero said Thursday. "Richland County is actually doing a little better than the state average."

Vero said he tracks COVID-19 numbers on a spreadsheet on a daily basis and that the county had a "net positive" of one on Wednesday -- numbers of new cases minus presumed recoveries.

"I am concerned about any uptick and the health and safey of Richland County residents," Vero said.

Commissioner Darrell Banks said he is not surprised to see numbers of COVID-19 cases rising in the country, a reference to immigration issues at the U.S.-Mexican border.

According to an ABC News report on Wednesday, "a startling number of unaccompanied migrant children have tested positive for COVID-19 after being transferred out of border stations, sparking concern over cramped and overcrowded facilities that may allow the virus to spread."

ABC reported Customs and Border Patrol facilities are severely overloaded and do not conduct their own COVID-19 testing.

"As long as we have open borders into our country, we will continue to have more cases of COVID-19," Banks said.

In terms of coronavirus in Ohio, Vero repeated what he has said many times since the pandemic reached the state in March 2020 -- the governor's office does not communicate with Richland County's elected leaders.

"The communication continues to be pathetic," Vero said. "We have heard  absolutely nothing from the governor's office since the pandemic again, other than emails that regurgitate what comes out of his press conferences.

"We didn't even hear from DeWine's office last year until a week after the first lockdown," Vero said.

In a story published Wednesday in The Columbus Dispatch, DeWine said he is worried about several rising coronavirus statistics, including variants spreading, hospitalizations rising and Michigan emerging as the nation’s new No. 1 hotspot.

DeWine, during a press conference on Thursday afternoon, is expected to issue an urgent plea for Ohioans to get the vaccine as soon as possible and to emphasize wearing masks and practicing social distancing, according to the Dispatch.

Cases, hospitalizations and deaths due to COVID-19 declined the first couple of months of 2021, but then hit a plateau and have been rising in the last few weeks, according to the Ohio Health Department.

“I am very concerned about it. The positivity rate is clearly up … the cases are up,” DeWine told The Dispatch. “We are in a race between the multiplying variants and the vaccine.” 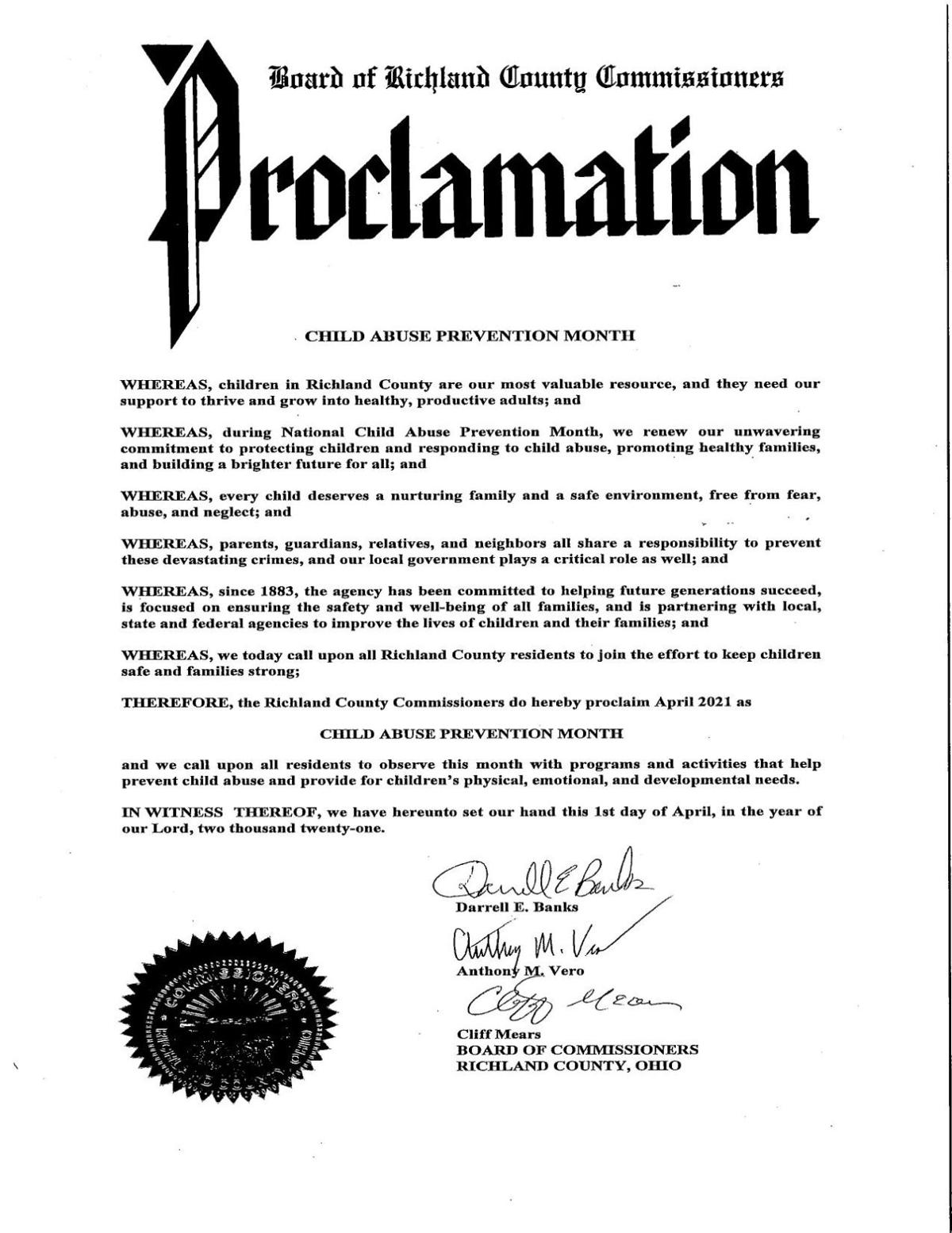 Also on Thursday, commissioners issued a proclamation designating the month of April as Child Abuse Prevention Month in the county. Commissioner Cliff Mears, who said he was impressed during a recent visit to the Scholl Road agency, read the proclamation.

Harless said the agency investigated 1,207 cases of alleged child abuse and neglect in 2020.  That number is down slightly from 1,260 in 2019, largely due to schools around the county going "remote" for long periods of time due to the pandemic.

Coles told commissioners about events the agency has planned during April, including its eighth-annual "Calendar Picture Contest" for third grade students throughout Richland County. The theme this year is “Staying Safe Together.”

The agency is also again sponsoring "Wear Blue Day" on April 14, an annual statewide event to spread awareness on the important issues of child abuse, neglect and dependency.

"I don't see how anyone could abuse a child," Mears told the agency's representatives. "I just don't get it."

Missy Houghton will be the new Richland County Dog Warden, effective Thursday. But she is no stranger to the county -- and the animals she loves.