New instructions now say any local governments spending coronavirus relief funds must receive all goods or have all services performed by Dec. 30, which calls into question contracts that extend into 2021.

For example, in July, commissioners approved spending up to $500,000 on mobile internet hotspots local students could use to better facilitate online learning during the pandemic for a school year that extends several months into 2021. 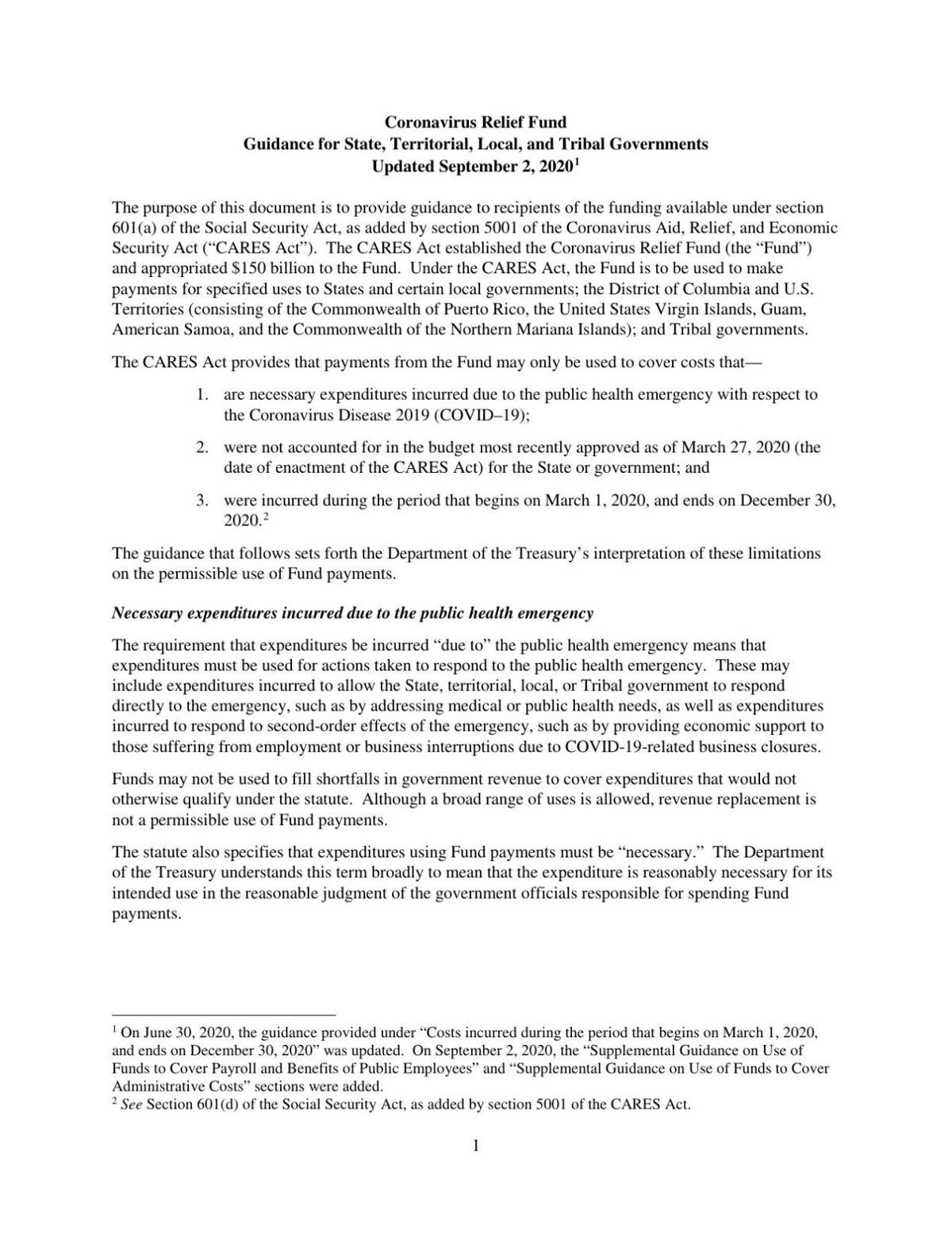 Commissioner Tony Vero said federal guidance at the time the county made the decision didn't include such a requirement, expressing frustration at the changing guidelines.

"You can't think of a better way to spend coronavirus relief funds (than the mobile hotspots)," Vero said.

County Auditor Pat Dropsey said he had never seen a grant program where the rules constantly change, which could lead to questions from state auditors next year.

"I have no problem speaking the truth," he said. "I will look them in the eye and tell them ... when the commissioners passed their resolution (for the hotspots), that guidance did not exist."

The federal government sent the revised guidance on Sept. 2, creating what Vero called a "substantive" change.

"Costs incurred during the period that begins on March 1, 2020, and ends on December 30, 2020. ... Treasury is clarifying that for a cost to be considered to have been incurred, performance or delivery must occur during the covered period but payment of funds need not be made during that time (though it is generally expected that this will take place within 90 days of a cost being incurred).”

"There are many things being used with these funds across the country for things that don't end Dec. 30. It's a problem, a big problem," Vero said.

If CARES Act expenditures are ultimately disallowed during the state auditing process, local governments could be required to pay for the equipment or services from their own general funds.

-- Commissioners tentatively approved about $230,000 in equipment requested by Dropsey and his IT manager, Matt Hill. About $203,000 of the expenses are eligible for CARES Act funds, including items such as new Dell laptops, improved phone/computer lines at Dayspring, additional wireless internet access points in county buildings, a cloud-based document signing program and body temperature detection systems at the entrances to county buildings. Dropsey will bring commissioners individual contracts for the purchases next week.

-- Commissioners met with county Prosecutor Gary Bishop to discuss the fact his office is facing a $40,000 reduction in its annual federal Victims of Crime Act grant. The grant, administered on the federal fiscal year that began Thursday, was $124,000 last year and will be reduced to $84,000 this year. The prosecutor said similar reductions are occurring around the country.

VOCA, created in 1984, draws from fees and fines collected from cases involving federal white-collar crimes and settlements. It's awarded by the U.S. Justice Department and, in Ohio, distributed by the state Attorney General’s Office.

Bishop said the grant funds three full-time crime victims' advocates in his office. "We consider this (reduction) somewhat of an emergency," he said. "I cannot afford to lose these three people. Their positions are essential."

Commissioners agreed to transfer general fund revenues to cover the fourth quarter of 2020 and will consider additional funding for 2021 during the annual budgeting process soon to begin.

Richland County commissioners on Tuesday approved $2.5 million in COVID-19 relief funds for salaries and benefits in the sheriff's department, a move that could also improve the county's general fund bottom line.