MANSFIELD -- Wayne McDowell has lived in Mansfield for 76 of his 78 years. A Black man, two of his brothers worked in law enforcement, one of them becoming the first African-American detective in the Mansfield Police Department.

Through his lifetime, he has also experienced racial injustice, devoting many years of work to the Mansfield NAACP.

That's why the Code of Conduct between the Black/Brown Coalition of Mansfield, a group he founded, and the Mansfield Police Department has been a personal goal.

The two organizations made it official Sunday morning by announcing they had agreed on the five-page code, which sets forth standards of behavior that residents and officers should both meet when interacting with one another. 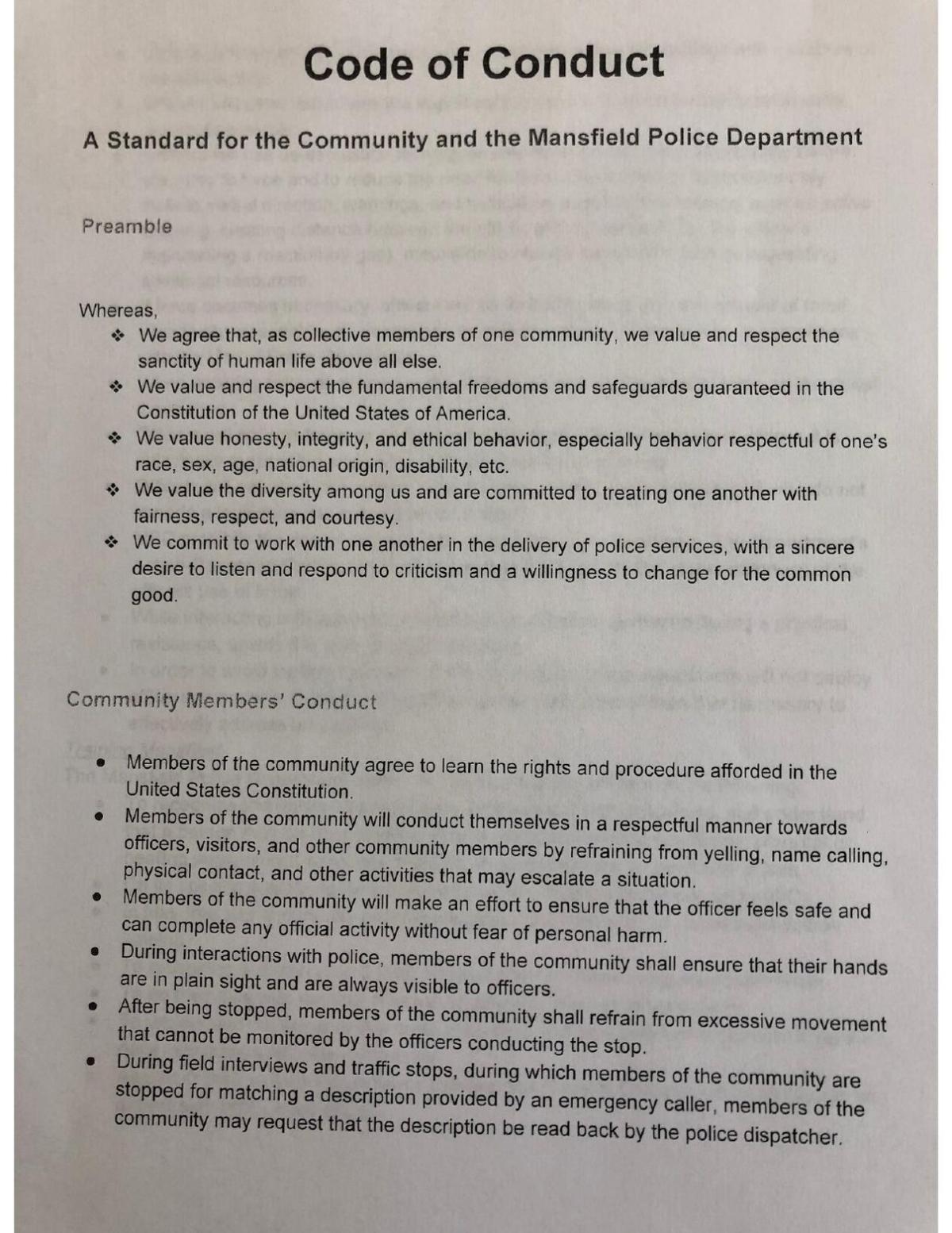 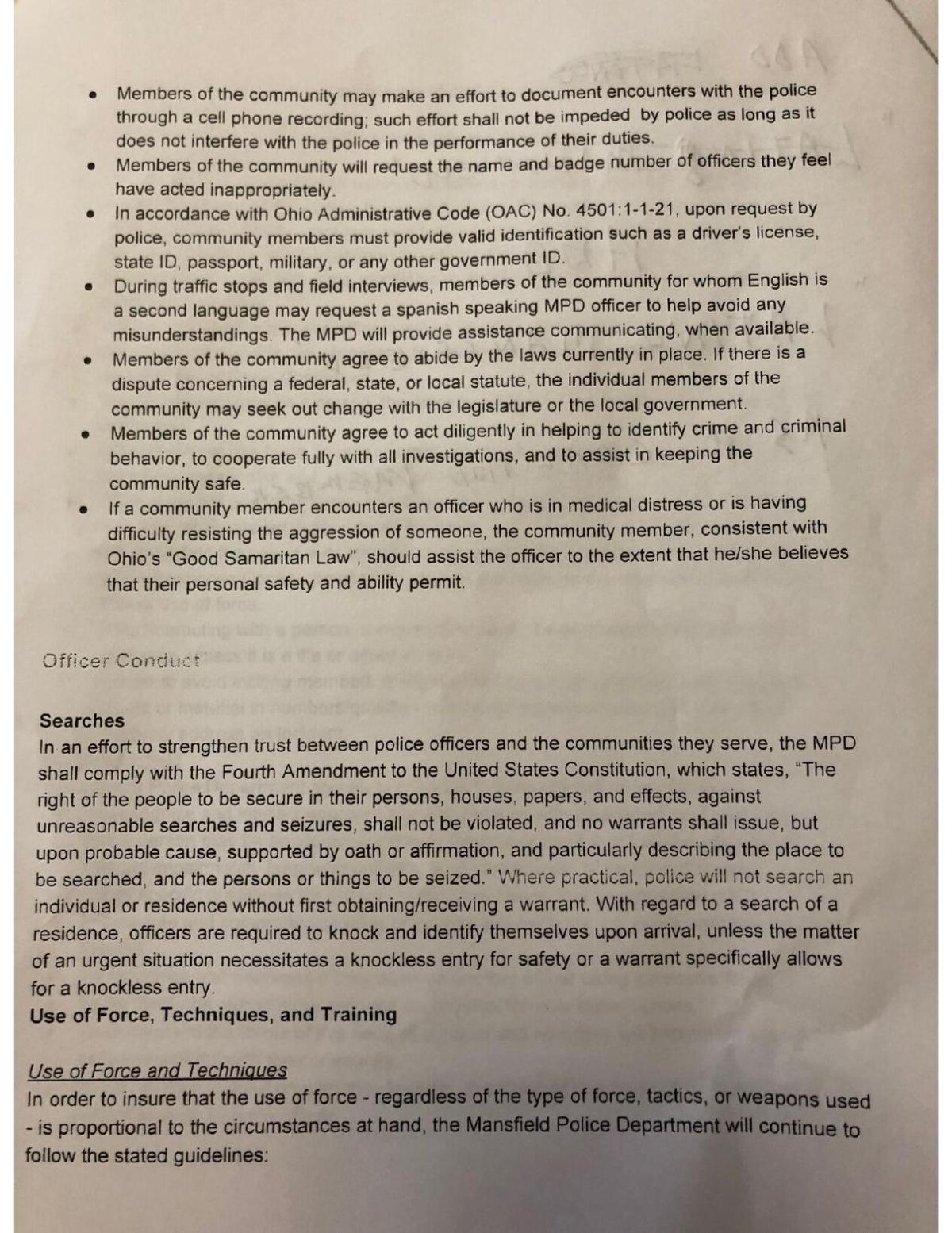 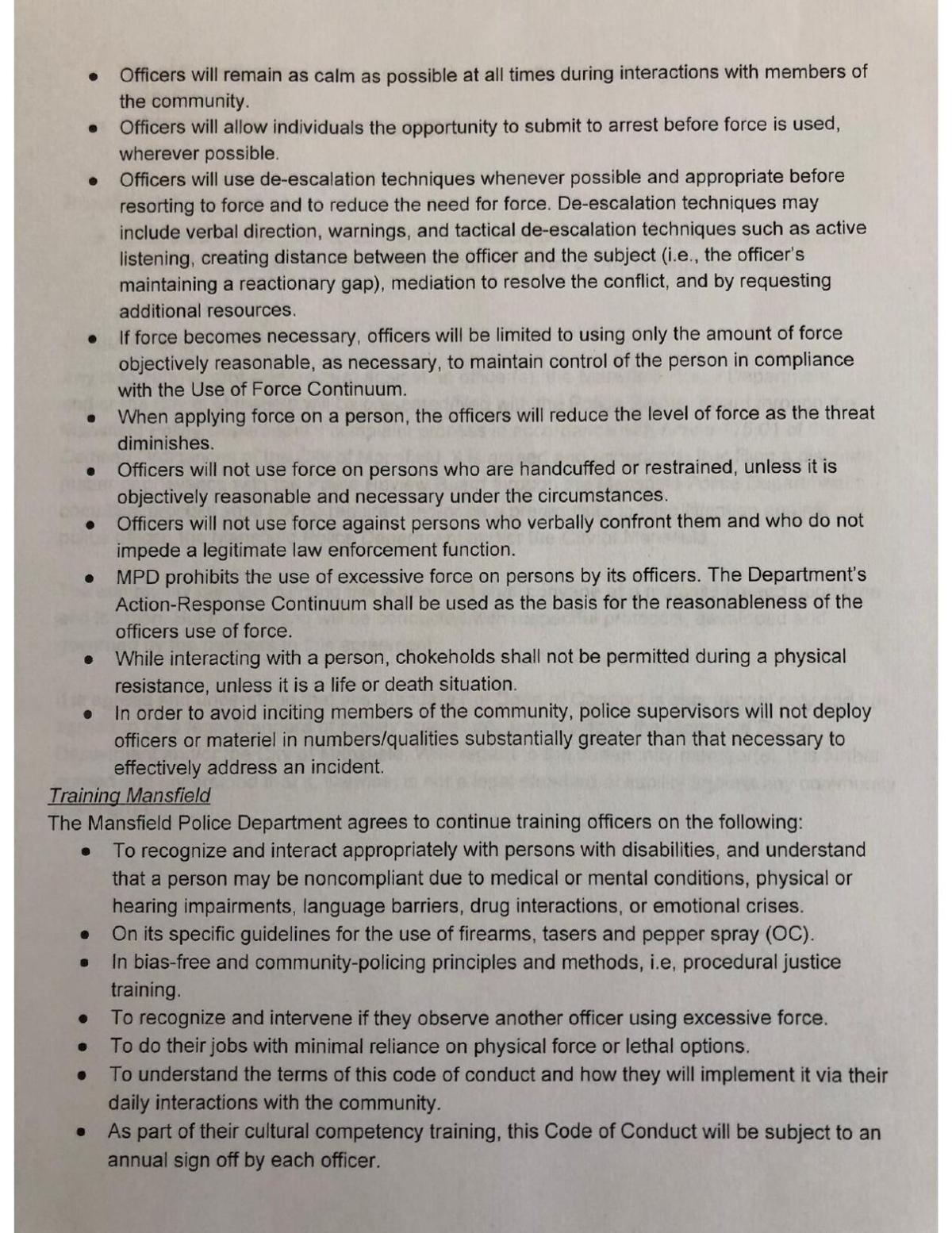 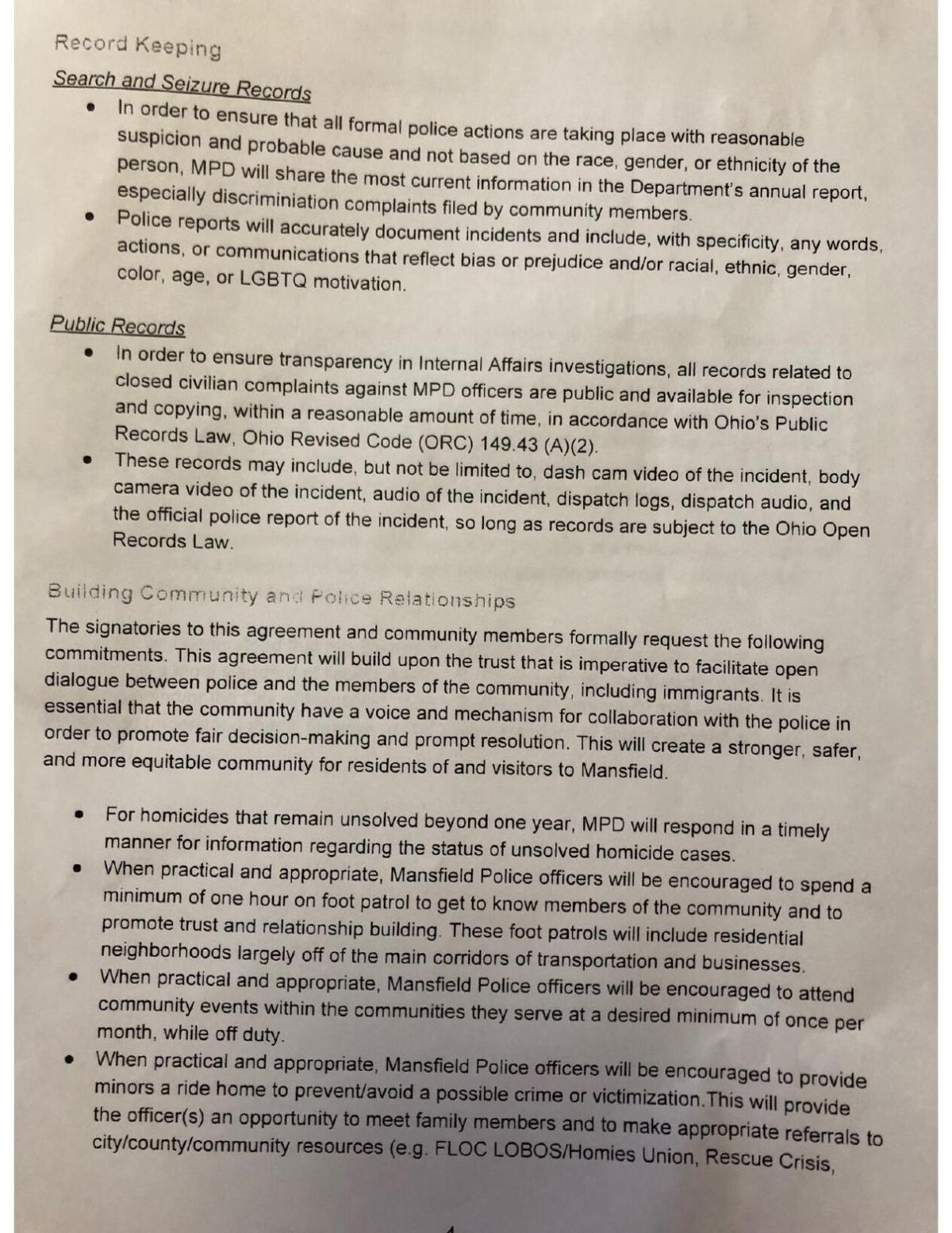 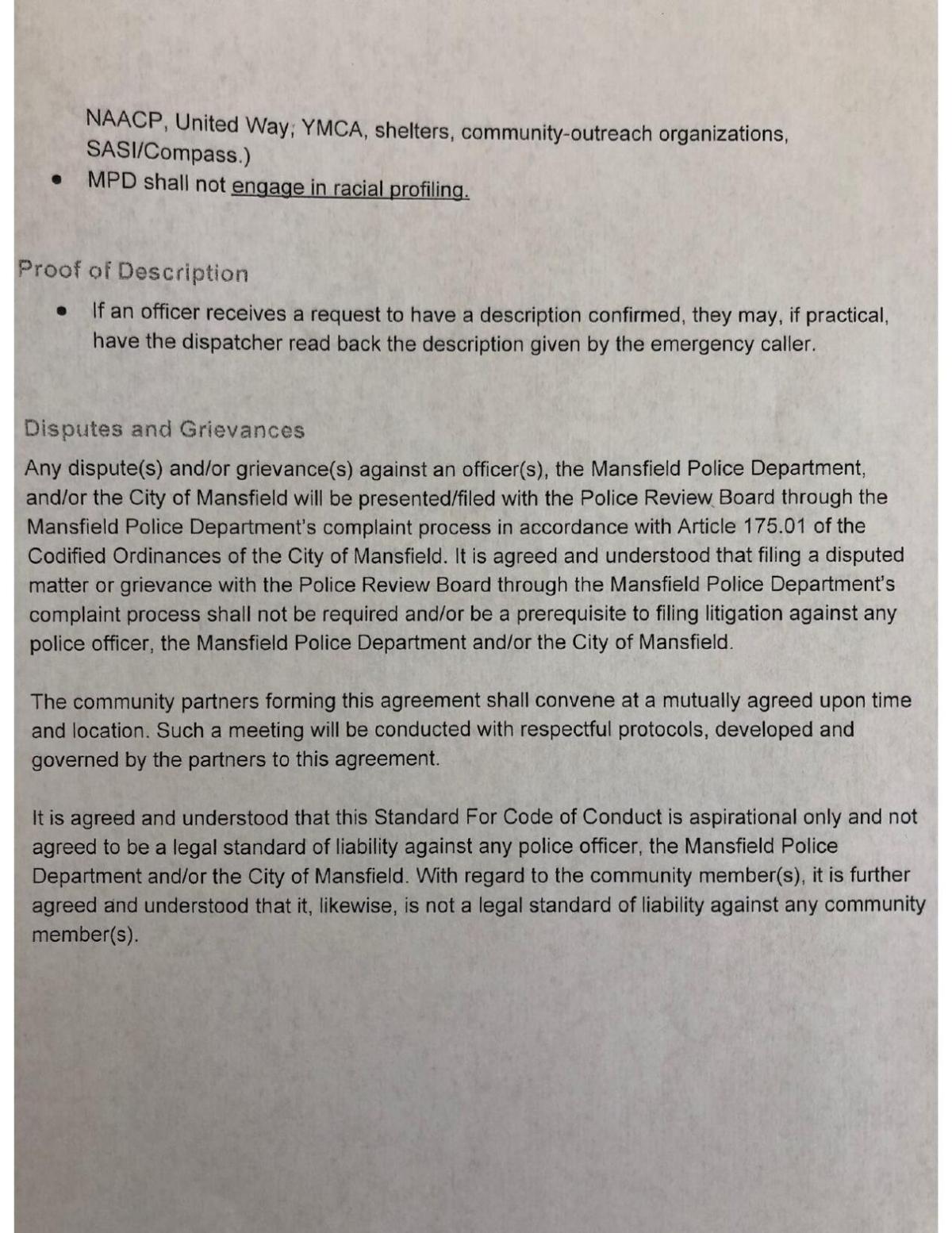 The Black/Brown Coalition of Mansfield and the MPD are inviting the public to review the code in its entirety. Comments, in favor and against, should be emailed to codeofconduct@necic-ohio.org or via regular mail to Wayne McDowell, P.O. Box 5321, Mansfield, Ohio, 44901.

"Comments may be used for possible modification of the Code of Conduct," McDowell said. "Comments must be received by Aug. 9."

The Code of Conduct represents additional change in the city even as Mansfield City Council prepares for a likely vote Aug. 4 on a resolution proclaiming systemic racism a public health crisis in Richland County.

YEAR-LONG EFFORT: McDowell began the Code of Conduct effort just over a year ago, forming a coalition group that has come to include members of the North End Community Improvement Collaborative, We ACT, Voices of Change, Activism and Leadership (VOCAL), and Latino Mansfield. The effort also gained the support of 4th Ward City Councilman Alomar Davenport.

McDowell said he was in the Mansfield/Richland Public Library, reading newspapers. He saw an article in the Toledo Blade, describing a successful effort in that northwest Ohio city on an agreement between the police and community it serves.

He took a copy of the article to the city and discussions began in earnest last fall with police Chief Keith Porch and Safety-Service Director Lori Cope. The final code agreed upon in Mansfield is patterned after that agreement.

The COVID-19 pandemic in March slowed progress, but the May 25 killing of George Floyd by Minneapolis jumpstarted the effort as protests and social unrest against police brutality spread across the nation.

Some of the Black Lives Matter protests have turned into violent confrontations, but several across north central Ohio have all remained peaceful.

"In light of George Floyd being murdered, our efforts intensified," McDowell said. "We felt we needed to be proactive in Mansfield to try to make sure nothing like that occurs here."

Porch, who became chief in April 2019, said he was receptive to the idea from the beginning.

"When I was contacted to meet with the Black/Brown Coalition of Mansfield, I felt this was a great opportunity to strengthen the relationship that was already established with the community," Porch said.

"Several meetings were held to review and discuss the proposed Code of Conduct between several community organizations and the Mansfield Division of Police and I feel the final proposal is an appropriate agreement," said the chief, a Mansfield Senior High School graduate who joined the MPD in 1999.

"While the Code of Conduct is aspirational only, it represents a majority of our policies, procedures, and the matter of law as a standard for how the Mansfield Division of Police currently operates," Porch said.

Porch said the code will supplement the department's current annual diversity training and will be reviewed and signed each year by all officers.

"I think they went extremely well. We are obviously unsure at first how it would go. (But) the first time we sat at the table together, it was made clear this was for open conversation and was a safe place for people to express their feelings," Cope said.

"It stayed that way. There were times we agreed and times we disagreed, but we kept working together," she said.

SETTING THE TONE: McDowell said the five-sentence preamble of the Code of Conduct sets the right tone for the relationship between police and the community they are sworn to protect and serve.

"We agree, that, as collective members of one community, we value and respect the sanctity of human life above all else.

"We value and respect the fundamental freedoms and safeguards guaranteed in the Constitution of the United States of America.

"We value the diversity among us and are committed to treating one another with fairness, respect and courtesy.

"We commit to work with one another in the delivery of police services, with a sincere desire to listen and respond to criticism and a willingness to change for the common good."

For example, community members "will make an effort to ensure the officer will feel safe and can complete any official activity without fear of personal harm," the code includes.

The code includes a statement indicating members of the community "agree to act diligently to identify crime and criminal behavior, to cooperate fully with all investigations, and to assist in keeping the community safe."

Also, officers "will not use force against persons who verbally confront them and who do not impede a legitimate law enforcement function" and "will allow individuals to submit to arrest before force is used against them, wherever possible."

The code also rules out racial profiling by officers and encourages more foot patrols by officers "to get to know members of the community and to promote trust and relationship building."

In the code, and in the department's policies, chokeholds are not permitted during "a physical resistance, unless it is a life or death situation."

Porch said many of the goals in the code of conduct are already in the department's policies.

"I also feel it is important to highlight to the community the Mansfield Division of Police is accredited through the Commission On Accreditation for Law Enforcement Agencies (CALEA), meaning that we adhere to strict standards and our policies are modeled after the best practices for law enforcement, which is reflected throughout the Code of Conduct," Porch said.

The city first earned that national accreditation in 1996, he said.

"This Code of Conduct also reflects the mission statement of the Division of Police which is, "We are a professional law enforcement team dedicated to promoting safe, secure neighborhoods and improving the quality of life through community partnerships with the citizens of Mansfield,' " Porch said.

"This agreement can benefit the police and the community as a whole," he said.

Mansfield City Council is expected to take a much-anticipated vote Tuesday on a resolution that declares systemic racism is a public health crisis.