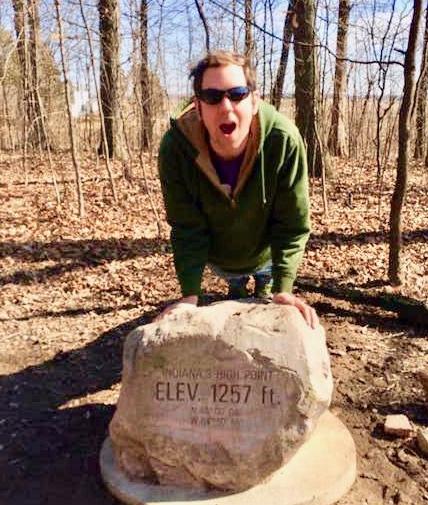 The top of Indiana, Hoosier Hill with Adam Fox. 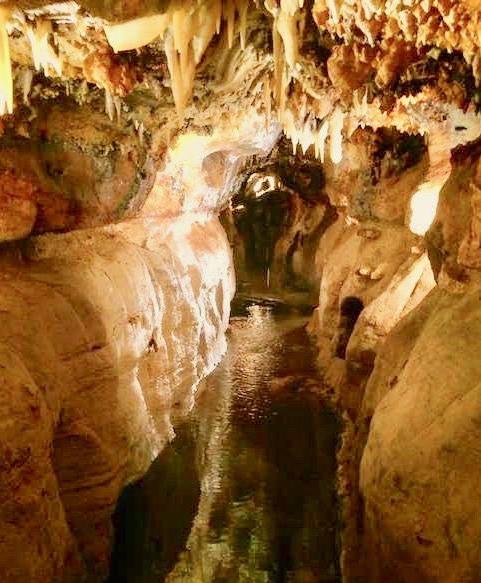 In the depths of the Ohio Caverns.

EDITOR'S NOTE: This is a continuing series on Ashland's Adam Fox, a Richland Source employee, who is on a quest to scale the highest peak in each state, dubbed highpointing. #21 & 22

Around 20,000 years ago, the tough guy Wisconsin glacier was wreaking havoc as it moved south through Ohio. The Buckeye state had been enduring an ice age for some 2 million years, with ice estimated to be a mile thick, and the Union's 17th state was done with the whole glacier thing.

A bunch of hardcore rocks around Bellefontaine got together and told the glacier, "You shall not pass!"

Although the glacier laughed and passed with ease, the rocks were not flattened (as much) as the surrounding areas. When the glaciers finally learned their place, were defeated and then retreated, those revolutionary rocks were left to form Campbell Hill, the highest point in Ohio.

In terms of state highpoints, Ohio and Indiana are two of the lamest. Perhaps only rivaled by Rhode Island and Florida. But Ohio has sentimental value as my home state. Originally, I was saving Ohio for last, but got too impatient.

And my two young boys wanted to tag along so it would be like all the family highpoint photos I’ve seen. If the kids were older, they would have notched many more by now. But I try to do as many as I can in winter, and often they are insanely quick and often dangerous trips with more travel than anything else — not the best environment for a child.

From Ashland, it took us 2 hours and 36 minutes to get to Hoosier Hill in Indiana, passing Columbus and Dayton on I-70. Hoosier Hill is right inside the state line, so it made it extremely accessible for Ohio residents.

Turn off a country road, park, walk 25 yards and you are there. Midwest farm country, boring, blah. I can say that ‘cuz I’m from here and live here.

From Indiana to Ohio's highpoint, we took all back roads and it was neat going through all the small towns that you’d never visit. They are too far from major roads and cities, aren’t good cut-through routes and have no tourist stops along the way. The ghost towns of the industrial revolution.

In Indiana they are called: Middleboro, Whitewater, Bethel, Arba, Spartanburg.

Even though it was my home state, I was unaware that Ohio’s highpoint had “hours,” as the hill was located on the campus of the aptly named community college, Hi-Point. Luckily, the small gate to the left of the main entrance was left open so we could legally summit.

At 1,550 feet, there were no real views and just college buildings all around. The highpoint adventure a lot of times has nothing to do with the summit, but everything before and after, the people that you may be fortunate to share a human experience with and see along the way.

The trip was salvaged by checking out the Ohio Caverns, just 10 minutes southeast of Campbell Hill. Maybe it was my "Goonies" upbringing, but caves have built-in adventure and imagination -- the way the air cools as you walk down the steps towards the mouth, the drips of water off the stalactite, calcium deposits forming shapes that look like whatever gets pulled from your subconscious.

And now, a small rant about highpoints on private land: no one gets to own state highpoints. They are just too significant and too sought after for any one owner. There must always be some kind of path to the summit that is open 24/7/365.

For any fellow highpointers out there, or those looking to pick up the obsession, I would recommend getting all your private property summits done ASAP, before some greedy landowner decides they want it all for themselves, which is pretty much the case in Illinois.

And we say, “Oh, it’s nice of the owners to allow access,” but what we’re really thinking is, “Ya, thank God you aren’t more of a scumbag than you already are.”

Yes, I understand there is a concept of private property in the U.S. But we give “ownership” to places like the Grand Canyon to the government so that no one can actually own it — it is for the people. Forever.

Stress levels are elevated in Richland County, and the solution to de-stressing and relaxing may be as simple as a weekend away in nature.