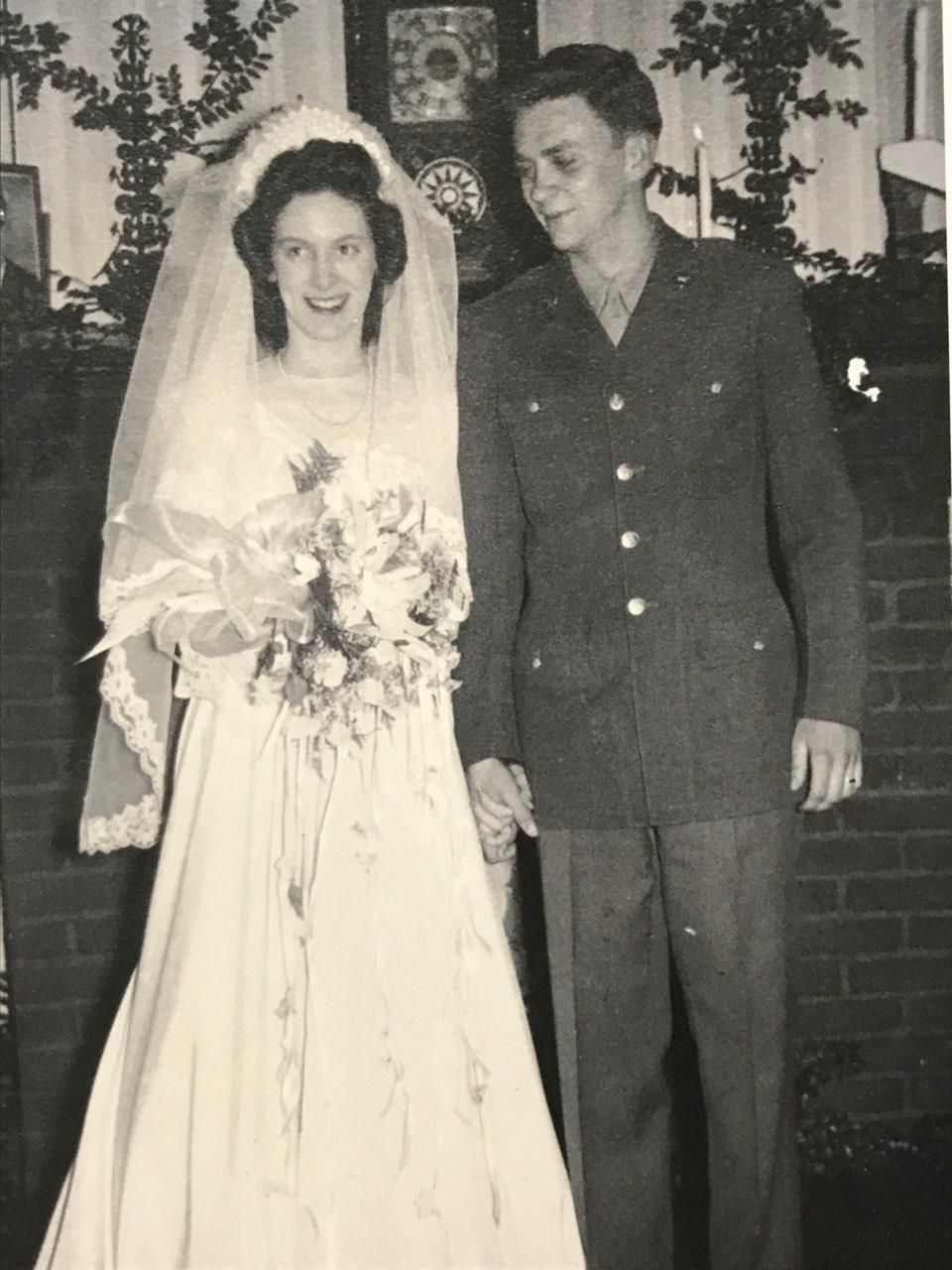 Edward and Caroline Powell on their wedding day, January 27, 1945. 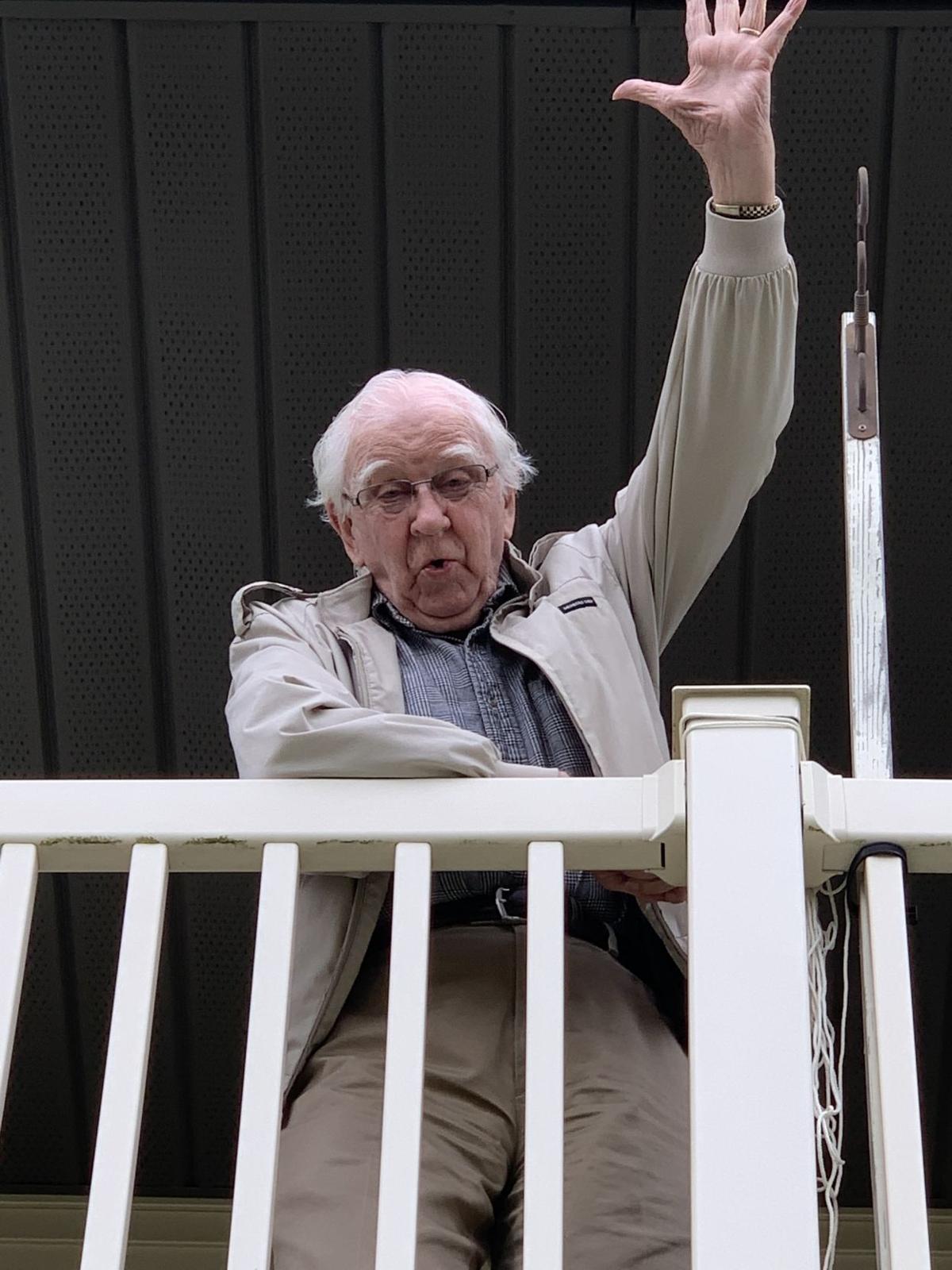 Edward Powell, 97, waves to his daughter from the balcony of his residence at Primrose Retirement Community. The retirement community has been on strict quarantine, but Powell and his family have kept in touch through letters and daily phone calls. 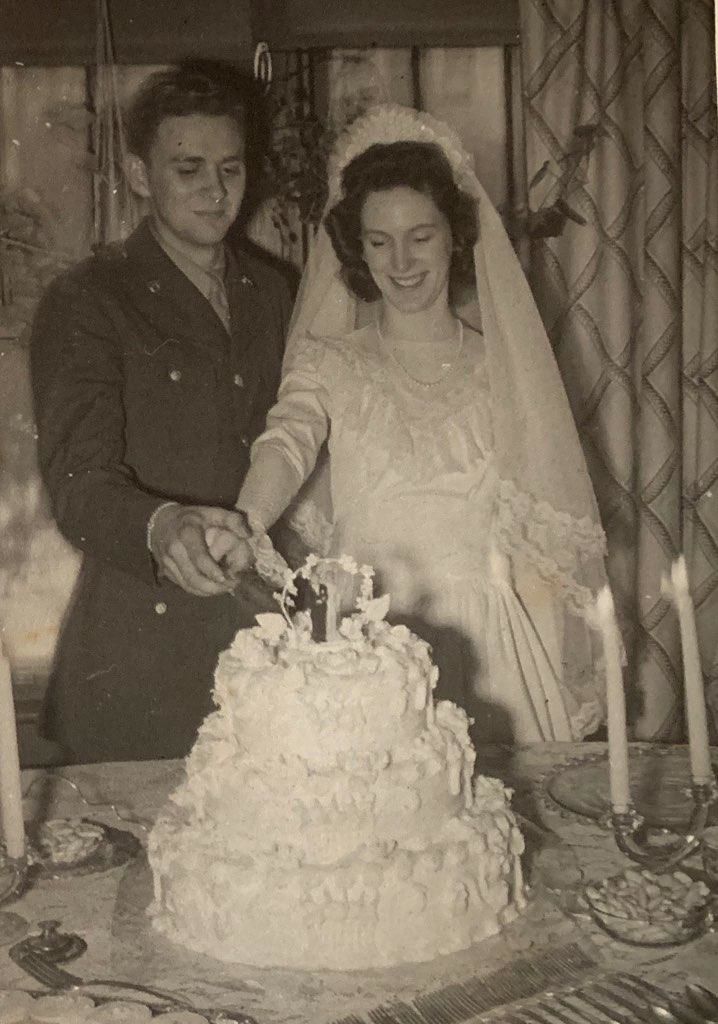 Edward and Caroline Powell on their wedding day, January 27, 1945. Edward was assigned to an Army special engineering department of the Manhattan Project later that year. Caroline accompanied her husband to Oak Ridge, Tennessee and worked alongside him as a lab technician.

MANSFIELD -- Edward Powell, 97, is known around Primrose Retirement Community for his cheerful, outgoing personality. An 11-year resident at Primrose, he single-handedly keeps the shelves alphabetized as volunteer librarian and has stepped in occasionally to lead exercise classes.

Before COVID-19, he was active outside the community as well, attending church on a weekly basis, visiting family across the country and spending summer weekends at his family’s cottage at Pleasant Hill.

So it’s no surprise Powell’s sharp mind and stamina helped him play a small role in a major historic event nearly 75 years ago -- the development of the nuclear bomb.

According to his daughter, Anne Rentfrow, Powell was fast-tracked through college due to the military’s need for engineers. Powell graduated from the Ohio State University with a degree in chemical engineering in September of 1944 and was immediately inducted into the United States Army.

After completing basic training, he was sent to Clinton Engineer Works, later known as Oak Ridge, Tennessee. There he was assigned to a team of scientists using gaseous diffusion to create enriched uranium.

It was grueling work.

At the time, the project was so secret that most of the scientists working on it didn’t even know the end goal.

“We knew we were separating isotopes of uranium but we didn’t have the foggiest idea what it was going to be used for,” Powell remembered. “We were surprised when they dropped the first bomb.”

According to Powell, most residents of Oak Ridge were dumbfounded after the bomb was dropped. Some people were so frightened that they quit their jobs and left town. He stayed in the service for another year, then left to become a nuclear engineer for Union Carbide. After 15 years, the nuclear power industry was winding down and he was transferred to Chicago to develop casings for the meat industry. He retired in 1986, but he hasn’t slowed down.

After ascending the corporate ladder, he spent his retirement volunteering. Two years ago, he took his entire family on an Alaskan cruise for his 95th birthday.

When Primrose went into precautionary lockdown in March, Powell found ways to keep busy. He’s read dozens of books in the last several months. He’s put together countless jigsaw puzzles. And every morning, he opens up a new envelope, sent all the way from Texas by his great-grandchildren.

“They sent me a 110 separate messages,” Powell said.

The idea started with Powell’s granddaughter, Shawn Bergen, who recruited her three teenagers to help. The family sent the first batch of 40 envelopes early in the pandemic. Powell rationed out the letters, reading one every morning until they were gone. Then Bergen contacted her nieces and nephews and together, they sent him another bundle.

“It was a lot of fun to sit down and break out the crafts. Even the boys got into it,” Bergen said. “They were also bored. Online schooling is tedious and they really enjoyed doing something other than that.”

Some of the envelopes contain a note, others have old family photos or paintings. From the beginning, Powell proudly showed them off to the staff at Primrose Retirement Community.

Executive director Marilyn Johnson described the envelopes as the highlight of his day.

“He is so delighted to have all these cards to open every morning. He just beams when he talks about it,” she said. “It’s wonderful to see a bright spot that the family has provided for him.”

“He’s very upbeat, optimistic, cheerful,” Rentfrow said of her father. “I mean going through this, can you imagine being in a facility that did a major lockdown?”

Although Powell keeps a positive attitude, he admits the last few months have been pretty boring. All residents were asked to remain in their rooms for weeks, with a designated staff member bringing meals to their doors.

Once the facility went into lockdown, the only time Powell got to see his family was when they’d stop by Primrose and stand below his second-story balcony.

Powell was also missing the company of his friends at Primrose, including his girlfriend, Betty.

“We eat together and we pass time by working jigsaw puzzles together,” he said. “We share a newspaper. I get the Columbus Dispatch so after I read it in the morning I take it to her room and drop it off.”

“It’s easing up a little bit,” Powell said. “We’re actually going down for breakfast, dinner and supper. They let us sit two at a table.”

Powell’s daughter said she’s grateful for the care her father has received at Primrose, even in the midst of less-than-ideal circumstances.

“The staff has been great. They bring him ice cream sundaes some days just to keep him cheered up,” she said.

Powell is grateful that he is finally able to see family and friends again, and that his loved ones remain healthy.