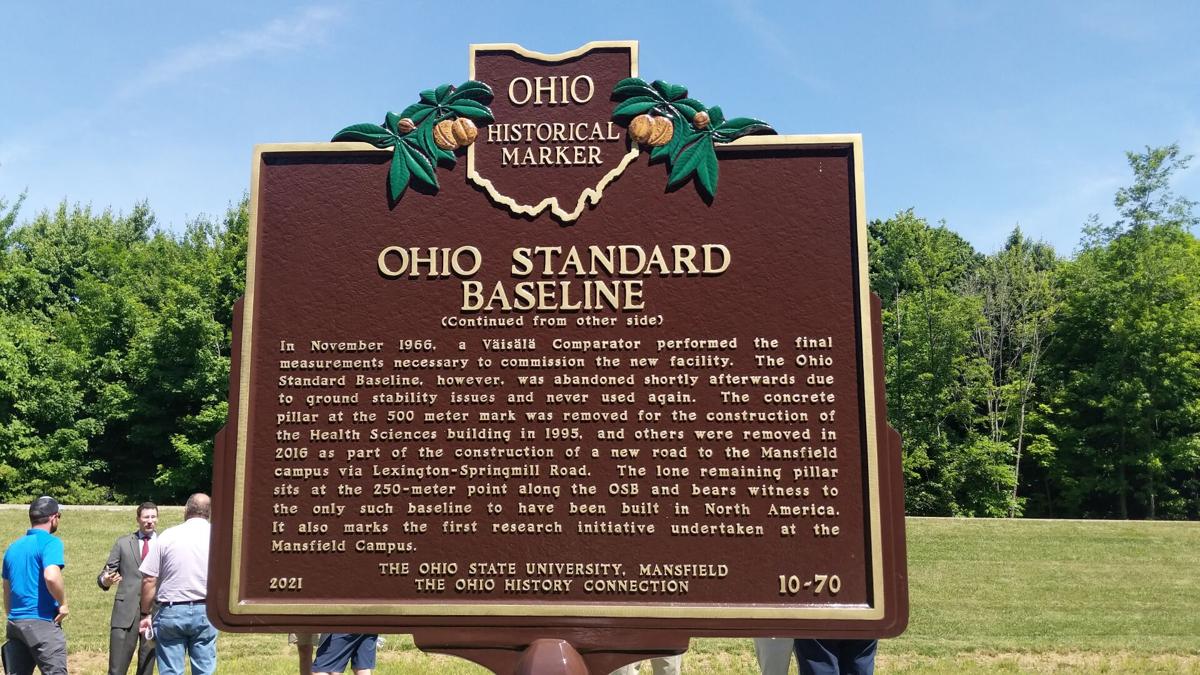 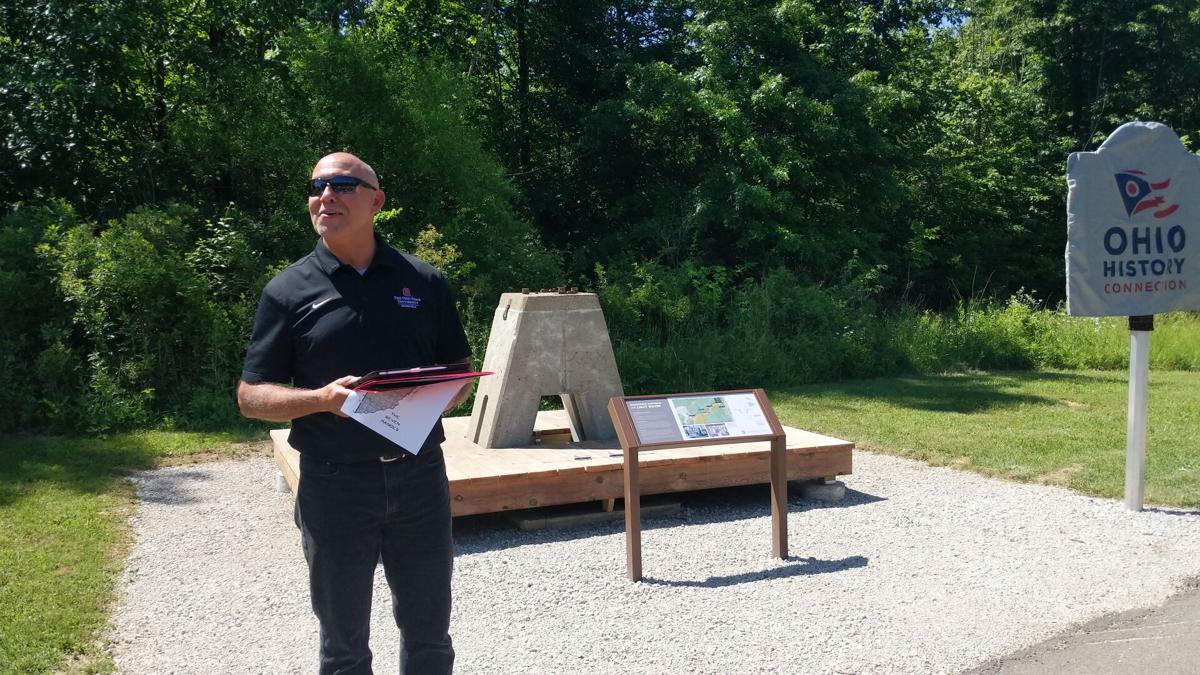 Ozeas Costa, an associate professor of Earth sciences at OSU Mansfield, discusses the history of the Ohio Standard Baseline and geodetic sciences. 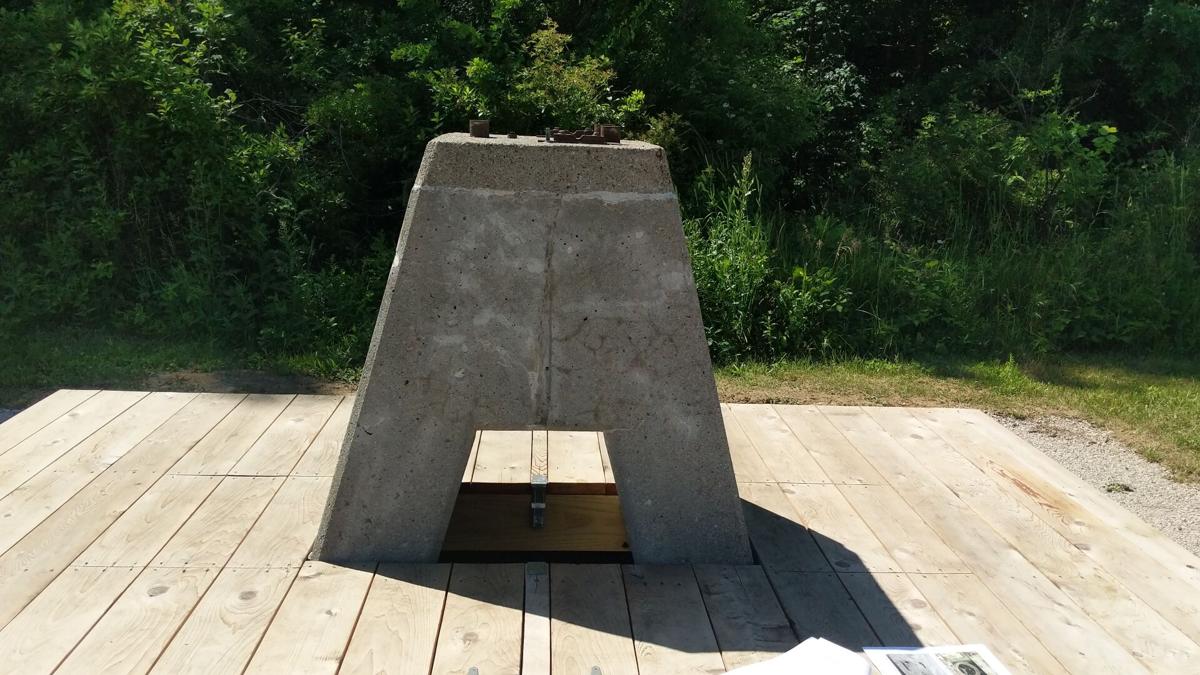 The concrete pillar at the 250 meter mark of the Ohio Standard Baseline. The other pillars were destroyed during various campus expansion projects over the years.

The Ohio Historical Markers Project, administered by the Ohio History Connection, allows local communities to identify, honor, and commemorate the important people, places and events that have contributed to their past and share these stories in a visible and lasting way. 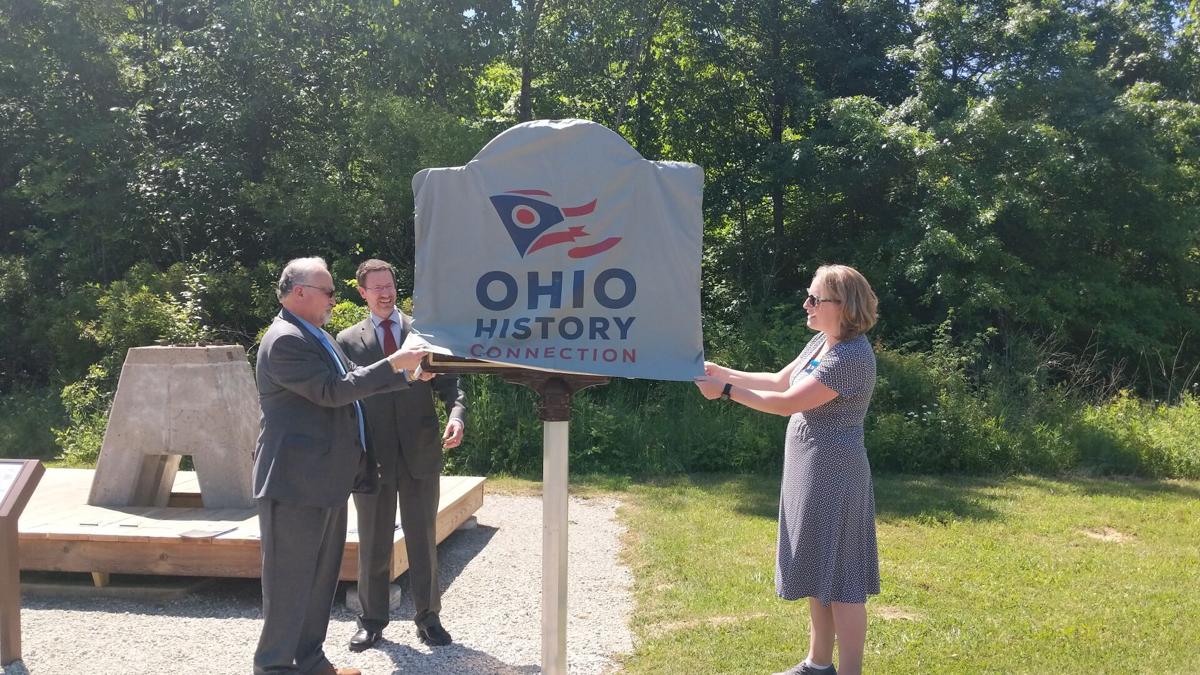 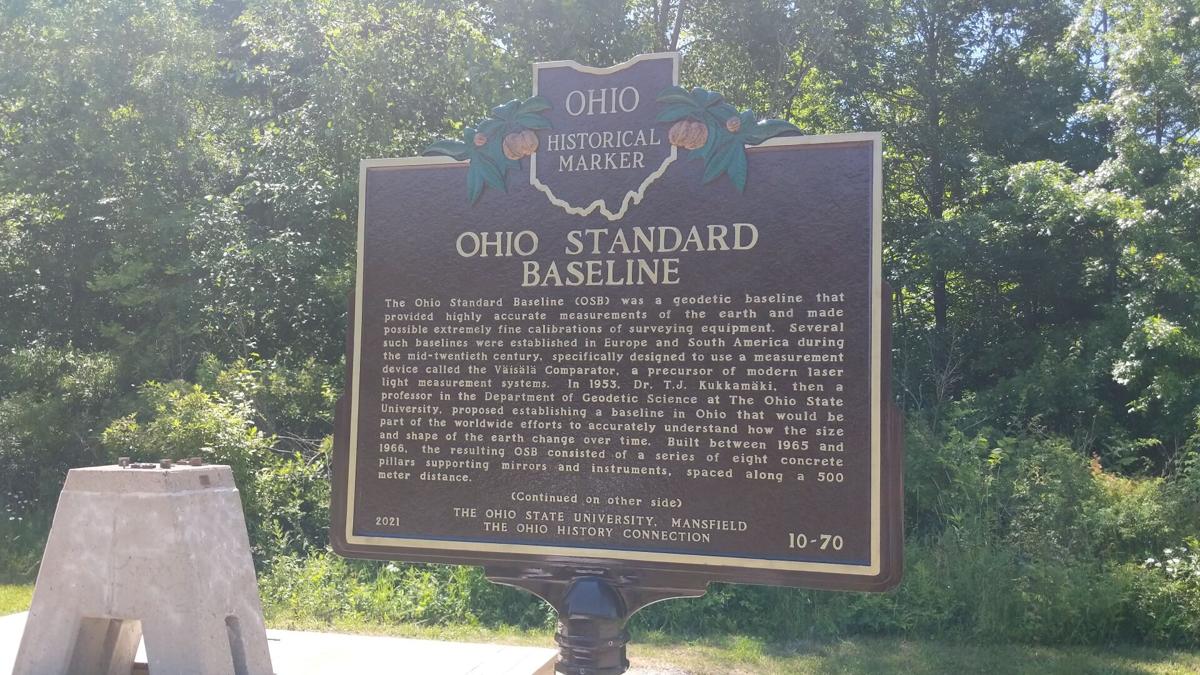 Krista Horrocks of the Ohio History Connection stated that there are approximately 1,750 markers across the state.

The marker was unveiled Thursday morning on the west side of campus next to a simple concrete base located along the bike trail near the health sciences building.

The pillar was one of eight installed as part of the campus’ first research project -- establishing a geodetic baseline.

A geodetic baseline is a line between two points on the surface of the planet for which the precise distance and direction are known, according to Ozeas Costa, an associate professor of Earth sciences at OSU Mansfield.

In 1953, Dr. T.J. Kukkamäki, then a professor in the Department of Geodetic Science at The Ohio State University, proposed establishing a baseline in Ohio that would be part of the worldwide efforts to accurately understand how the size and shape of the earth change over time.

The OSB was constructed between 1965 and 1966 and consisted of a series of eight concrete pillars spaced along a 500-meter distance. The lone remaining pillar sits at the 250-meter point.

Although it seems abstract at first glance, the science of geodesy has many practical purposes. Surveyors used it to determine property lines and develop boundaries between neighboring properties, townships and entire states.

“Determining the precise position of terminate points on the Earth's surface -- taking into account the shape, size and curvature of the planet -- is not an easy task,” Costa said.

Geodesy is also a crucial part of navigation -- whether it’s a smartphone GPS or space mission.

“If I'm sending an astronaut into space, and he has to land on Mars, for example, I need to be very precise,” Costa added. “It's like shooting a bullet on a moving target across town. I need to know exactly the speed that the target is moving and the distance between me and the target so I can hit the target.”

Other facets of earth science also rely on geodesy.

The OSB’s series of concrete pillars contained reflectors, mirrors and other specialized instruments for measuring distance using light waves. The equipment was so sensitive that it could detect the pressure of a finger on the cement block.

When it was operational, the baseline could provide highly accurate measurements of the earth and be used as a reference point for calibrating surveying equipment.

“One of the reasons this is near and dear to our hearts is that Ohio State is a research university, including on our regional campuses,” said Norman Jones, dean and director at OSU Mansfield.”It's one of the things we pride ourselves on that our faculty are engaged in research and that many of our students get an opportunity to engage in research.

Costa described the installation as one of global significance during its time.

“At the time that it was proposed, there were only six projects like that all over the globe. And this was the only one in North America,” he said.

The technology has since become obsolete due to advancements like satellites and laser technology, but Costa said it still remains an important part of geodetic history.

Despite being highly precise technology, the OSB baseline was only used once due to ground stability issues and the fact that the technology was already becoming out-of-date.

“This type of technology really was phased out right around when this was constructed,” Jalbrzikowski said “It was an important research project, but it was almost behind its time.”

Jalbrzikowski encouraged young people interested in math and science to consider a career in geodesy.

“All the studies have shown that in the US, we're kind of falling behind,” he said. “It's really important for anyone considering entering that field to explore it.”