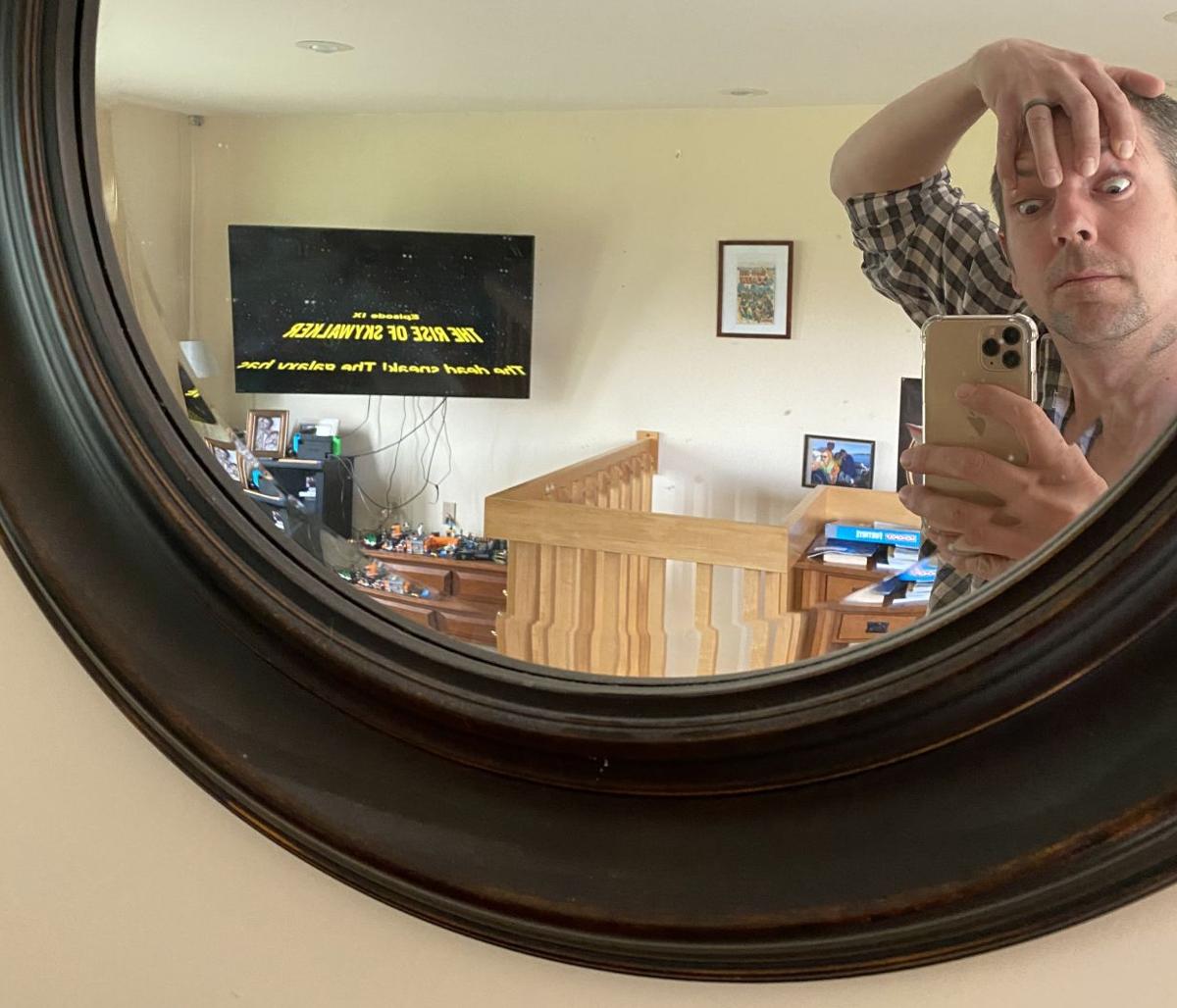 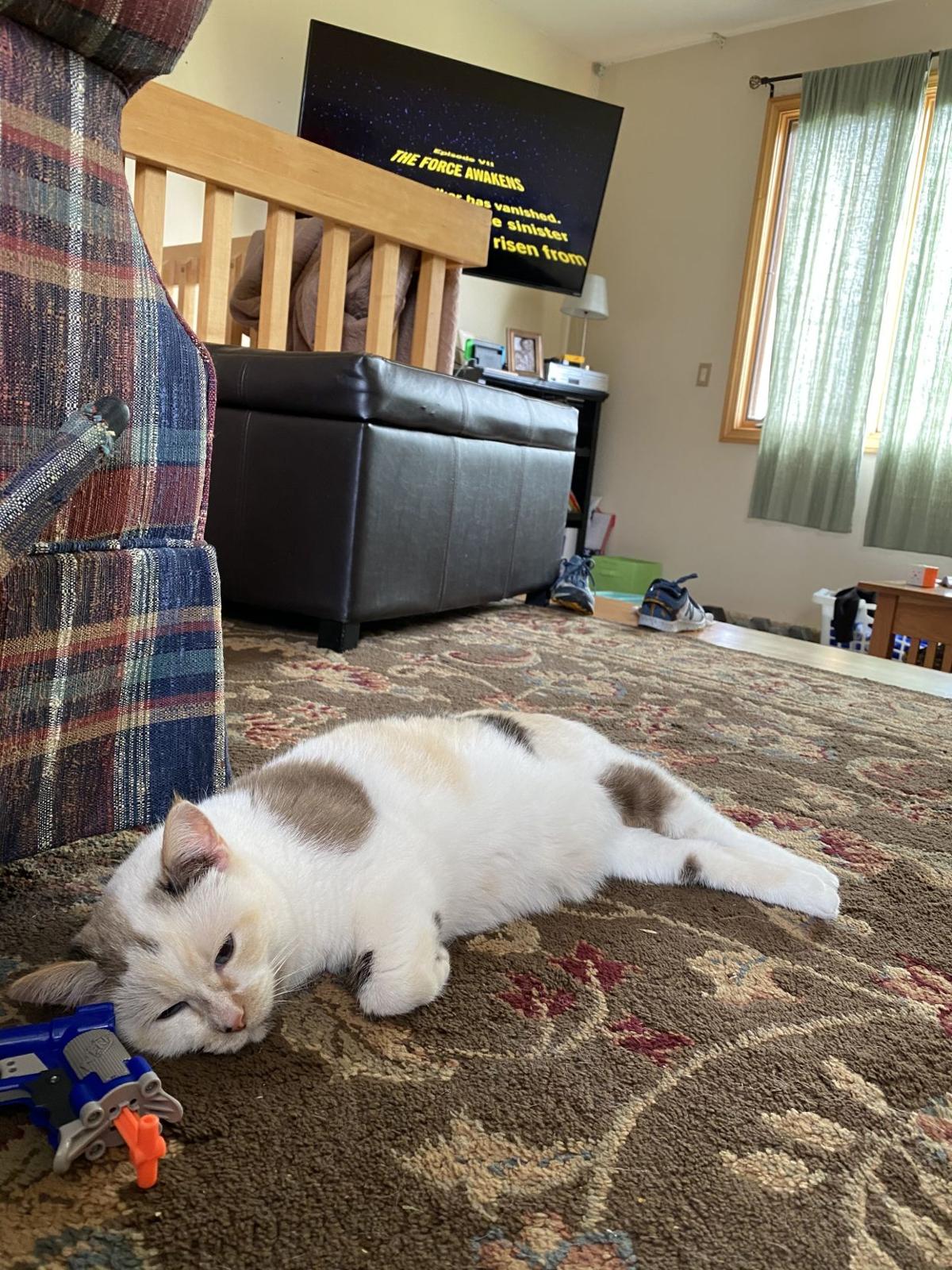 Luna the cat couldn't make it through the marathon, and took a nerf to the head. 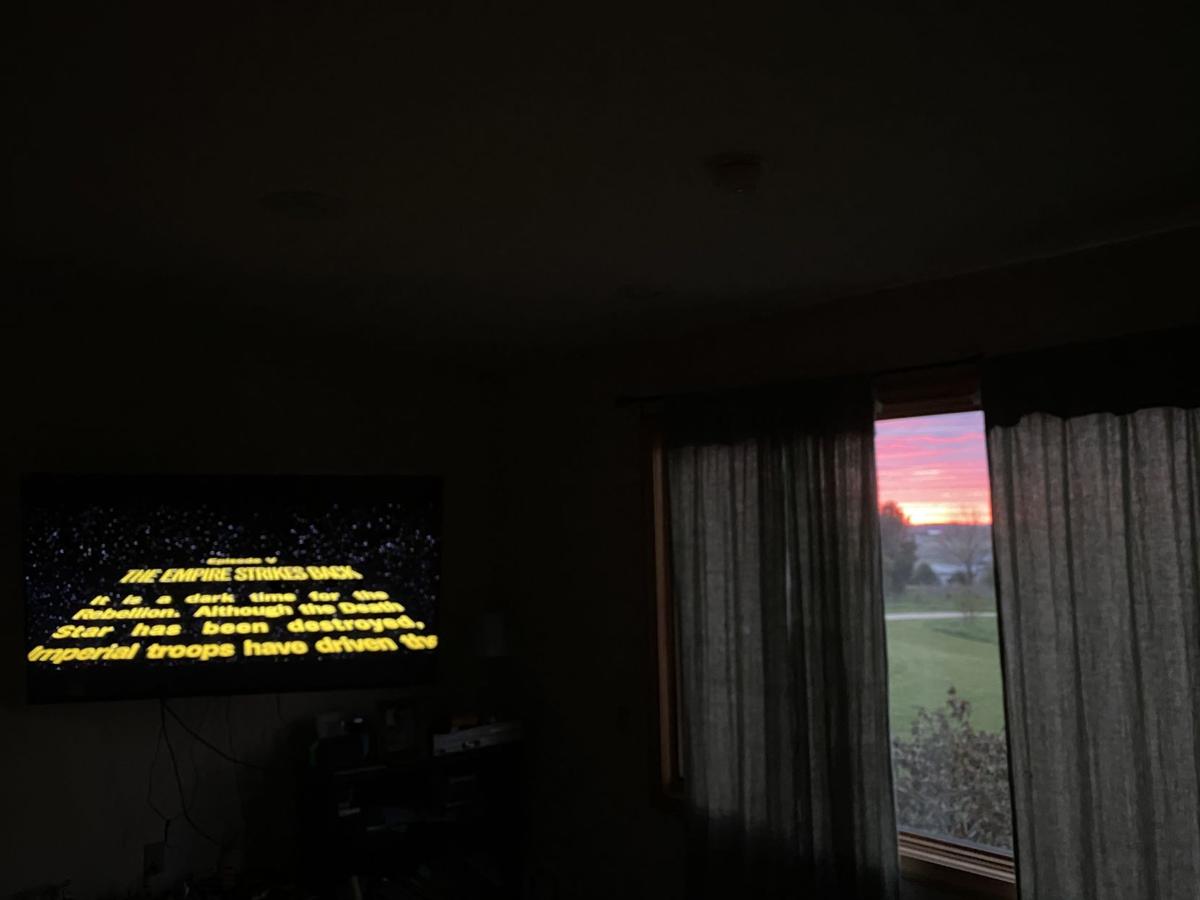 For Star Wars dorks like me, today is a national holiday.

There have been two art bucket list things hanging over me: listening to the entire Beatles anthology all the way through, and watching every Star Wars movie in “episode order.”

Finally, this rotten pandemic was going to work in my favor.

The marathon began with Episode 1 at 10 p.m. after many, many glasses of cabernet. It didn’t take me long to remember the horrors of Jar Jar Binks. “Me-sah think-sahs that you-sah are gonna hate-sah this movie-sah.”

Back in ‘99, “The Phantom Menace” was set to reinvigorate the franchise, George Lucas was back with the story and directing, and fanatics were primed for a new fix. But all the “true fans” hated it, found microscopic plot holes and sent death threats to Lucas.

Years later, when asked why he sold Lucasfilms to Disney, he said something to the extent of, “Imagine millions of people begged you to make another film. And you did. And then they wanted to kill you for it.”

Too bad about Darth Maul. The double-sided lightsaber duel at the end of the film backed by the absolute greatest movie score composer of all time, John Williams, was a cinematic masterpiece.

The franchise simply wouldn’t be as sweet without the music of Williams. The sugar to the apple pie. Honestly, in your head right now, can you not hear the Jaws theme? Doesn’t the sound of the motivating music behind Indiana Jones make you smile? The score when they arrived and saw dinosaurs for the first time in Jurassic Park. Not to mention Eiger Sanction, Harry Potter, Superman, Dracula, E.T., Home Alone, Saving Private Ryan ... hell, I could go on forever.

In “Episode II: Attack of the Clones,” we see a young Anakin Skywalker, the chosen one, all grown up and lookin’ all hot. There are enough gross old man Jedis, so it was nice they cast Canadian Hayden Christensen and brought on Samuel L. Jackson. I’m not trying to be all “woke,” but Star Wars is a pretty white franchise.

Probably have seen “Clones” 30 times and I still don’t understand which clones are fighting for what side and why and where can I get some “death sticks?” -- asking for a friend.

At 2 a.m., it was hard to hit play on “Episode III: Revenge of the Sith.” Wine was swapped for light beer, but it was difficult to combat the fatigue. Went outside, stoked the bonfire, slapped myself a couple times and started screen staring again. My two sons finally fell asleep on the living room couches.

All I’m saying is, I’m glad Anakin was the young one in terms of his romantic relationship with Natalie Portman’s Princess Amidala. Hey, I used to know you when you were 8 years old. But you’re over 18 now, let’s hook up! Gross.

My favorite scene is when Anakin was crawling up from the lava field, on fire, with his legs chopped off, screaming. Gotta mind the high ground when fighting Obi-Wan Kenobi.

Just when pass out was imminent, Disney+ auto-played my favorite Star Wars film, “Episode IV: A New Hope,” and I jumped back to life.

Don’t even get me started on when Luke is on Tatooine, staring at the distant double setting suns, with the Williams score. We’ve all looked out into that escape horizon at some point in our lives.

Man, Luke really started out like a crybaby. “But I was going into Tosche Station to pick up some power converters!” Get your chores done first, boy. Jeez.

An orange crush sunrise was piercing through my curtains at 6 a.m. when the opening credits for “The Empire Strikes Back” rolled. “Empire” was always ranked as the best among the die hards. ‘Cuz it’s so “evil” and doesn’t have a happy ending and it’s so dark and mysterious, like the fans themselves, navigating the hardships of living in grandma’s basement.

My 8-year-old woke up in the early morning and got hooked by “Empire,” which he’d never seen. He was upright on the couch and gasped when Luke lost his hand.

“Stupid Vader, leave him alone!” Much like everyone in 1980 when the famous “Luke, I am your father” line dropped, Remy was flabbergasted. “Talk about a major plot twist,” he said.

People also always talk about the infamous “incest kiss” between Leia and her brother, Luke, although they didn’t know about being related at the time. All I’m sayin is, if Leia was my sister, I’d make out. Judge away.

Tell me something more adorable than an Ewok. OK, maybe a baby Yoda. The furry little forest heroes were a big risk in terms of how fans would receive them when “The Return of the Jedi” premiered in 1983.

Coffee was the saving grace as hour 12 of the marathon was approaching and my eyes wouldn't stop watering, but I couldn't shut them as Luke Skywalker was in the final battle with Darth Vader, the Christmas-colored light saber duel aboard the half-completed Death Star.

I always think about that line right before I’m about to do something really stupid.

In true disgusting human fashion, I had stale Combos for breakfast at 10 a.m. as the third trilogy commenced.

As a big fan of the HBO show “Girls,” I was super pumped when Adam Driver was cast as the series’ new villain. Daisy Ridley was somewhat of an unknown actor before playing the orphaned scavenger Rey, and she magnificently portrayed the true Jedi spirit.

Hopefully the days of the Bond hero grabbing the distressed lady by the inner arm and “guiding” her to safety are dead.

No one knew who the new leading Jedi was going to be, and towards the end we all realized it wasn’t the pilot Poe, not Finn, but Rey! And she may prove to be the baddest Jedi of them all.

The pores on my face were filled with filth and I grabbed a quick face wash and microwaved a burrito as “The Last Jedi” rolled just after noon, 14 hours in.

We were left with a Luke Skywalker cliffhanger at the end of Episode 6, and fans were super pumped to see Skywalker train Rey.

Let’s clear something up right quick: Anakin Skywalker was the chosen one. He brought balance to the force when he killed the Emperor. Luke Skywalker is my favorite Jedi and the guy I would pick first in my Star Wars fantasy draft. Rey a close second.

It was hard to focus on the film. All the chairs and couches were uncomfortable, and I remember making at note at 2:38 p.m. that my consciousness had become a space blur. Turning my head, I would see trails of red salt flats, blasters, lightsabers, and when I looked out the window I tried to find TIE fighters and star destroyers among the clouds.

My impatience led me to start picking apart “The Last Jedi.” Who was Snoke? Why can’t Storm Troopers shoot? Why do they even wear armor when every single shot kills them, even freakin’ rocks from Ewoks? Why are there so many side plots that make absolutely no sense? Did Princess Leia just fly through space as a frozen ghost?

Don’t worry; Luke made an appearance at the end of the film and I got all emotional again and remembered why I fell in love with this saga in the first place.

At 3 p.m., the final film, “The Rise of Skywalker” was underway. The finish line was in sight, and seeing was hard. Cracked a beer.

Miss a night of sleep and everything slows down, especially when your body wonders why it hasn’t moved for hours.

A big theme of the film was self-sacrifice -- what was a person willing to give up for the betterment of the galaxy? Oh, and childhood abandonment issues. Like, everyone’s parents weren’t around to raise them, and when they grow up, the parent wants to kill them or make them join some death cult.

Tried to tell my kids to be thankful I wasn’t a Sith but my teenage son just rolled his eyes.

Side note: what are droids? Originally, I thought they were soulless machines. Just AI robots, stuck to a certain amount of programming restrictions but with personality. But they are more like pets. And sometimes, slaves. Interesting how one’s character coincides with how you treat droids in the Star Wars universe.

Other side note: how was Rey on the remnants of the Death Star when that battle station got blown to bits? Anyway...

When the marathon was completed, I loaded up “Rogue One,” and that was a mistake. Started to hate everything related to the series. Clocked out at 7:31 p.m. when it finished, 21.5 hours of straight Star Wars.

What did I learn? Nothing. Did I become a better person? No. The only thing derived from the marathon was that I need to start doing Death Sticks. 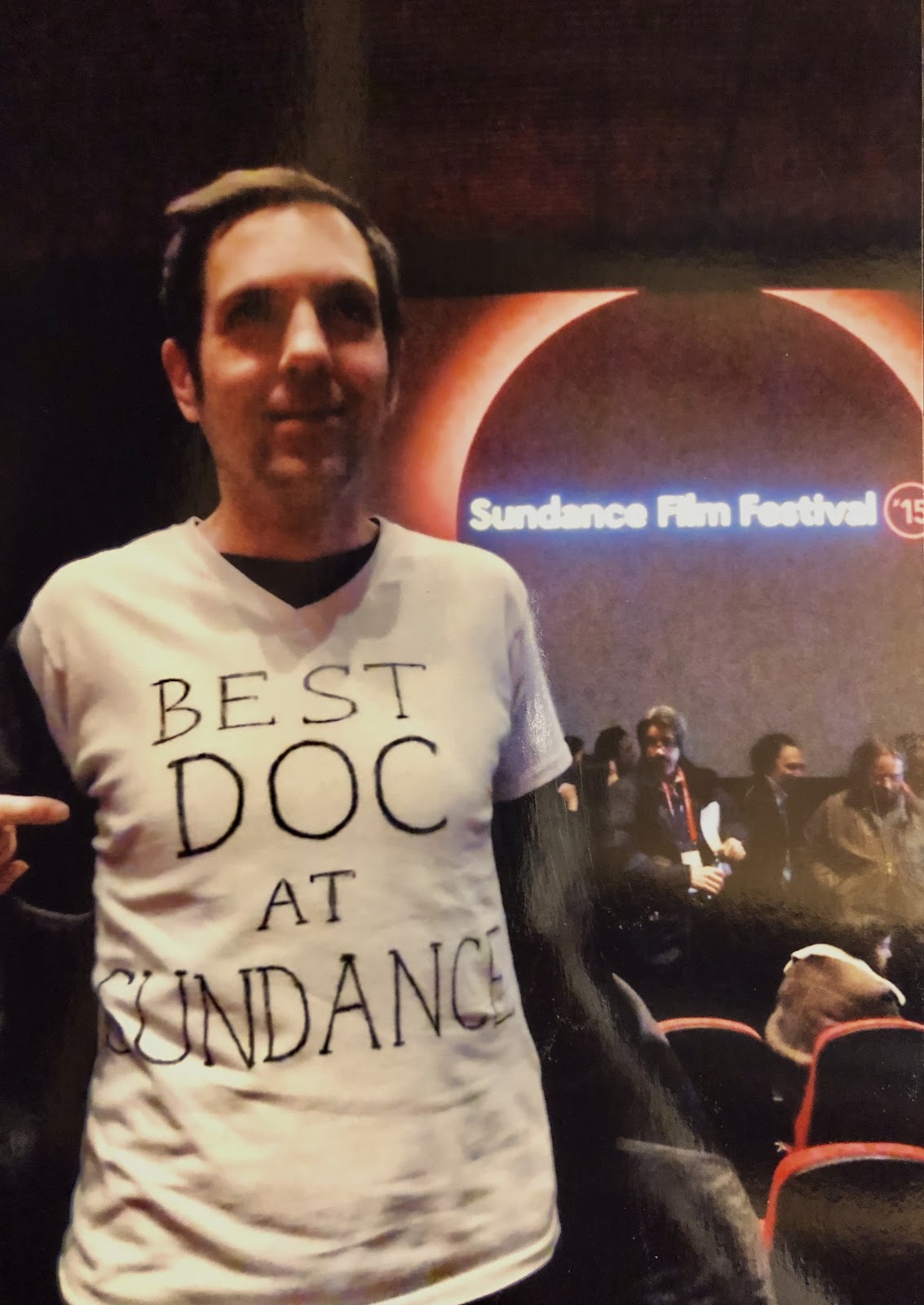 Source Media film critic Adam "Doc" Fox has been in the credits of “45365,” that won the Grand Jury prize at SXSW Film Festival. Fox has attended Sundance twice and was in the credits for “Western” and "Bloody Nose, Empty Pockets." Also for “Contemporary Color” at the Tribeca Film Festival in NYC.