Myers Field was frequently the site of Thanksgiving football games in Ashland. 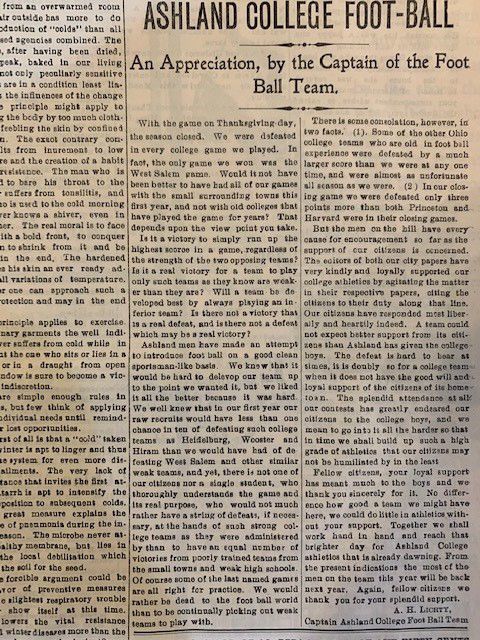 ASHLAND -- Thanksgiving is a holiday in the United States which still holds true to its name.

First observed by the Pilgrims in October of 1621, Thanksgiving was a three-day feast that celebrated the harvest season which supported the survival of early colonists. As time passed, the important harvest festival and its traditions spread west across the country.

President Abraham Lincoln declared Thanksgiving as an official holiday in the United States in 1863. It wasn’t until 1941, that Congress approved it always be observed on the fourth Thursday of November each year.

It’s easy to see how family gatherings, turkey with all the fixings, and acknowledging blessings received throughout the past year became such a rich part of our heritage.

But what about football? What does football have to do with Thanksgiving and how far back does that tradition go?

After a large dinner, townspeople were looking for something to do to get out of the house, get some fresh air or work off the large meal.

The first Thanksgiving Day football game took place in Philadelphia, Pennsylvania in 1869, less than two weeks after Rutgers defeated Princeton in New Brunswick, New Jersey in what is widely recognized as the first intercollegiate football game in the United States.

In Ashland, it was an early local tradition for sports fans to attend the annual Ashland-Mansfield football clash that took place at the Myers field on Miller Street. P. A. Myers eventually donated the field to the city of Ashland in 1928. It was originally a block of farmland that now is home to the YMCA, the old Osborne grade school and the Armory.

The local YMCA was the hub of activities for Christian men, including sports and other activities that provided worthwhile entertainment in the days before television.

High school football games played on Thanksgiving were often called a Turkey Day Game or a Turkey Bowl. These games were most often played between local rivals and were quite common in the Northeast. In most cases, the games were played with kickoff times as early as 10 a.m., allowing participants and spectators to have the rest of the holiday off.

Also during this era, many large families or groups of friends started the tradition of meeting up to play their own version of Turkey Bowl which fostered family fun and competitiveness. Watching football moved indoors and onto home television screens by the 1950’s.

When it comes to NFL football, the Detroit Lions first played on Thanksgiving in 1934. George A. Reynolds, a local radio executive in Detroit purchased the Spartans from Portsmouth, Ohio and moved the team to Detroit. They played as the Spartans in the NFL from 1930 to 1933.

In Dallas, Thanksgiving football games eventually became an entirely normal part of life. This began in 1966 and Dallas has missed playing at home on the holiday only in 1975 and 1977. In 2019, the NFL will broadcast three football games on Thanksgiving Day.

Maybe you will be one of the lucky ones who gets outdoors and throws the pigskin around a little bit as part of an ongoing or new family tradition.

In any case, Happy Thanksgiving!