MANSFIELD -- With exposed ceiling beams, spartan concrete floors and temporary lights strung throughout, the building looks nothing like a children’s museum.

But Fred Boll has big plans, and a big imagination.

“The new space will allow for a larger audience, more exhibits and handicap accessibility,” said Boll, director of the Little Buckeye Children’s Museum, as he gave a tour of the museum’s future location, a former office building at 174 Park Ave. West.

The building is set to open as the new home of the Little Buckeye Children’s Museum in 2021. The site will offer customer parking and elevators - -two amenities that aren’t available at its current location on Fourth Street.

There will also be spaces designated for traveling exhibits, birthday parties and art and science projects that families can complete together.

Boll believes the expansion is long overdue. For years, Little Buckeye has been bursting at the seams.

“Six years ago we had about 24,000 visitors. We’re expecting 70,000 this year,” said Boll. “About four years ago we actually cut our advertising to almost nothing because the growth curve was so fast we couldn't keep up.

While most of the exhibit plans are still in the “concept” stage, Boll shared that the upstairs exhibits will be designed for older children, broadening Little Buckeye’s target audience to include children ages 10 to 16.

“A lot of the exhibits will have a sense of competition,” said Boll. Plans include a six-person air hockey table, a marble lab, arcade and game areas and a two-person laser maze race.

There will also be a lava room.

“Did you ever play the lava game when you were growing up, where you pretended the floor was lava?…We’re going to build a room for that,” said Boll. “The floor will change color and then you’ll have to get off the floor.”

The main level will include exhibits geared towards younger children, as well as a gift shop and snack shack area.

All exhibits will be built new, rather than being transferred from the museum’s current Fourth Street location. Thus, the museum will not be closed for moving

“We’re not physically bringing the exhibits, we’re bringing the concepts over. Because all the exhibits we have now are built specifically for the space they’re in,” Boll explained. We will close there on a Friday evening and open here on a Saturday morning.”

Fostering Wonder with the Imagination District

Little Buckeye’s new facility is part of a larger effort to create an Imagination District, an arts and educational hub that will drive economic improvement in Mansfield.

The museum has partnered with the Renaissance Performing Arts Association to raise $6 million dollars for the project. Boll and Renaissance CEO Mike Miller believe the collaboration will go far beyond fundraising.

“We can do a lot more children’s programming, we can do a lot more interaction between the two organizations when it comes to planning special events,” said Miller. “I think every time Fred and I get together we think of new ways that we can collaborate and that’s what’s been great about the process.” 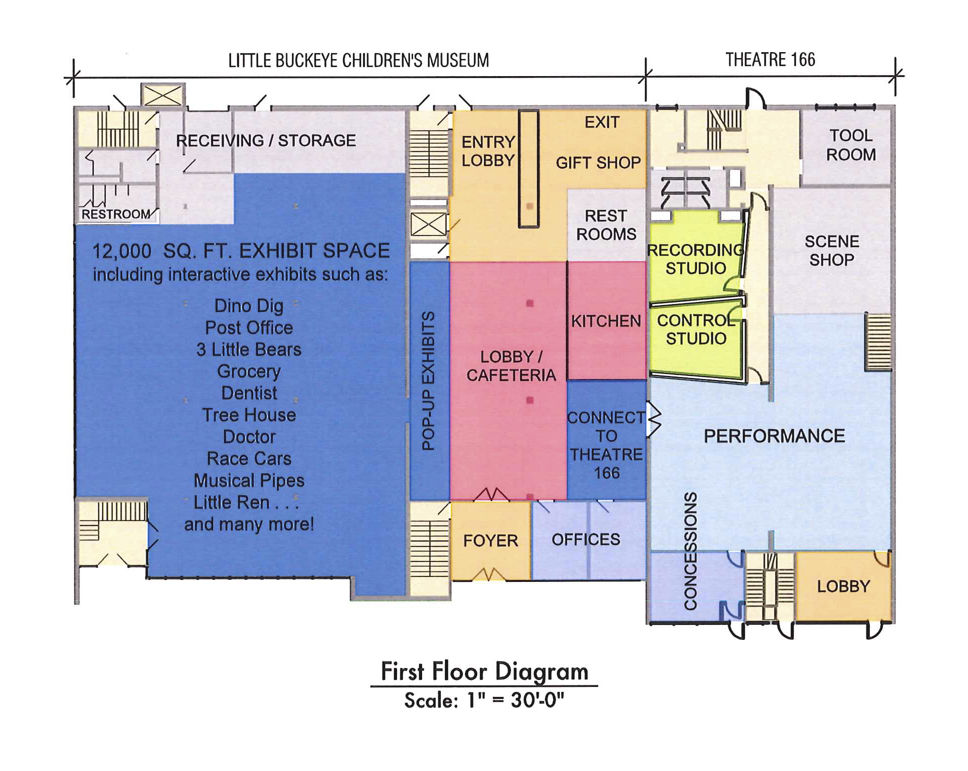 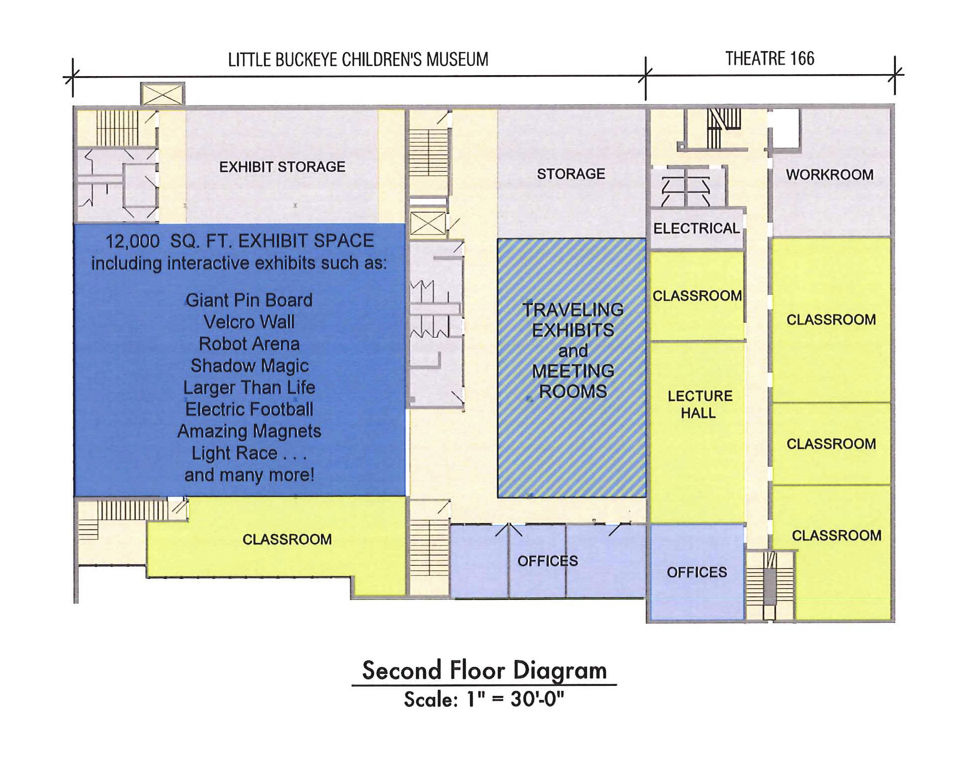 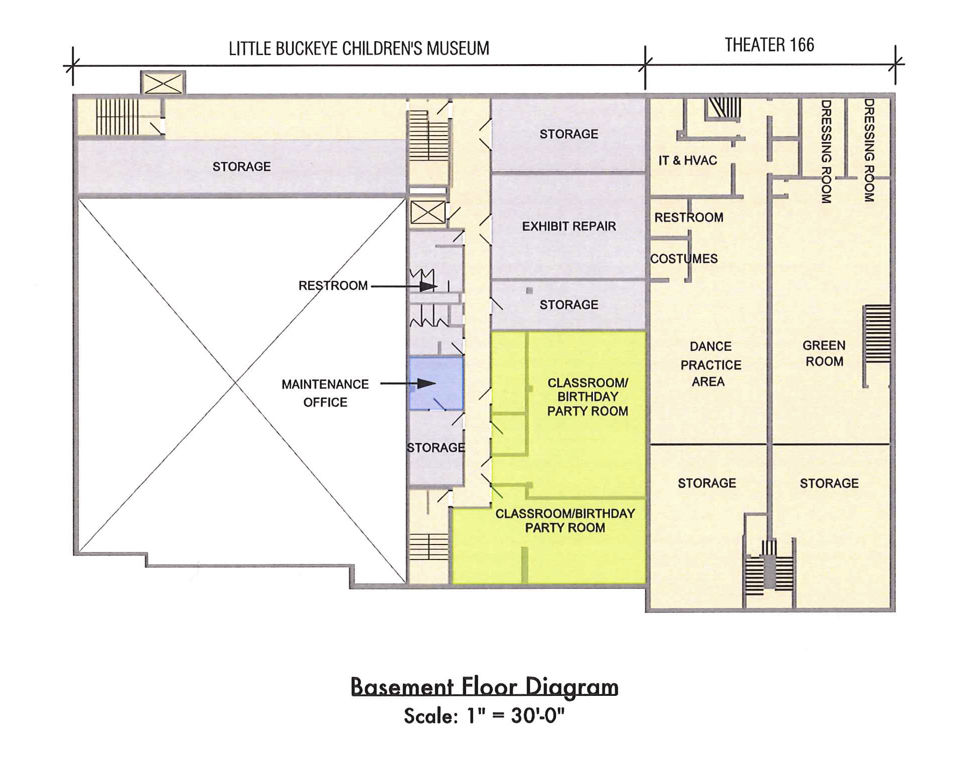 Proposed plans for the conjoined buildings at 166 and 174 Park Avenue West,  the home of the Renaissance Education Center and Little Buckeye Children's Museum, respectively. Most of the construction at the education center is complete; Little Buckeye's new location is slated for completion in 2021.

“To see two organizations working together in such a unique way to rethink and reimagine some wonderful space in our downtown is really exciting,” said  Jodie Perry, president and CEO of Richland Area Chamber & Economic Development.

The district will include the new-and-improved Little Buckeye, an outdoor plaza, a public park and the already-completed Theatre 166 and Renaissance Education Center. District organizers have raised 75 percent of the needed funds.

"Raising $4.3 million in less than a year is no small feat, and we still have a way to go to reach the $6-million dollar goal," said Annamarie Fernyak, chair of the Imagination District steering committee.

“The Imagination District will help shape Mansfield into the community it wants to be, which is creative, connected, inclusive and forward-thinking," she said.