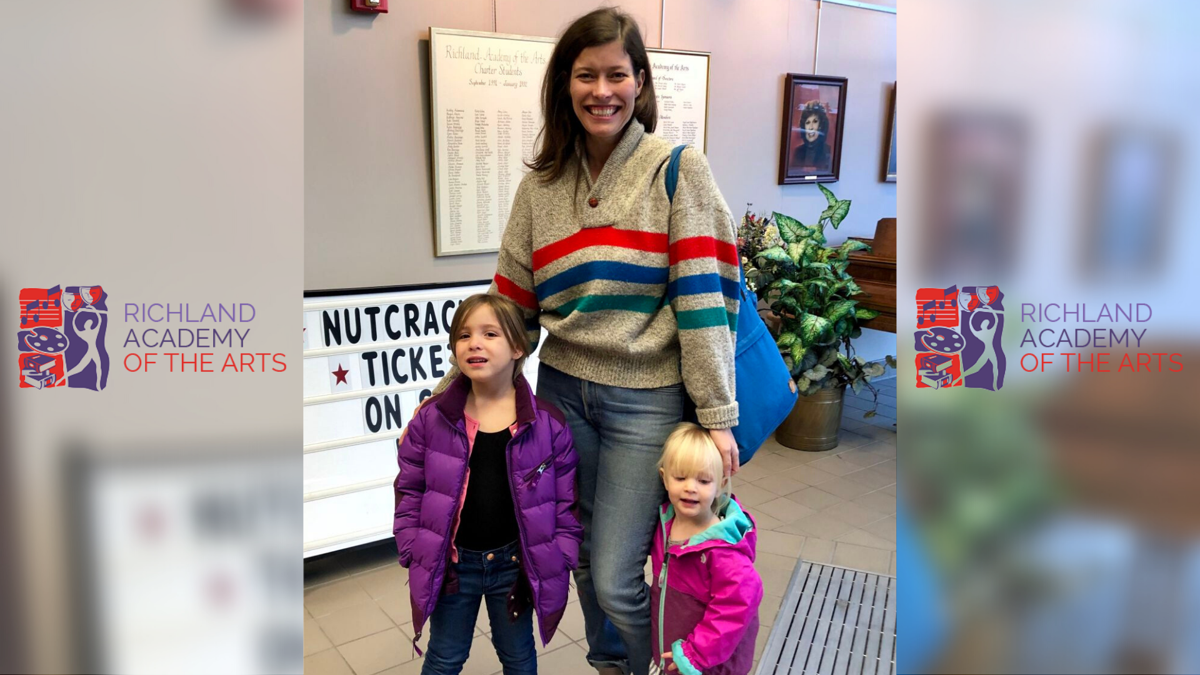 Jillian Kyrou with her daughters at Richland Academy of the Arts 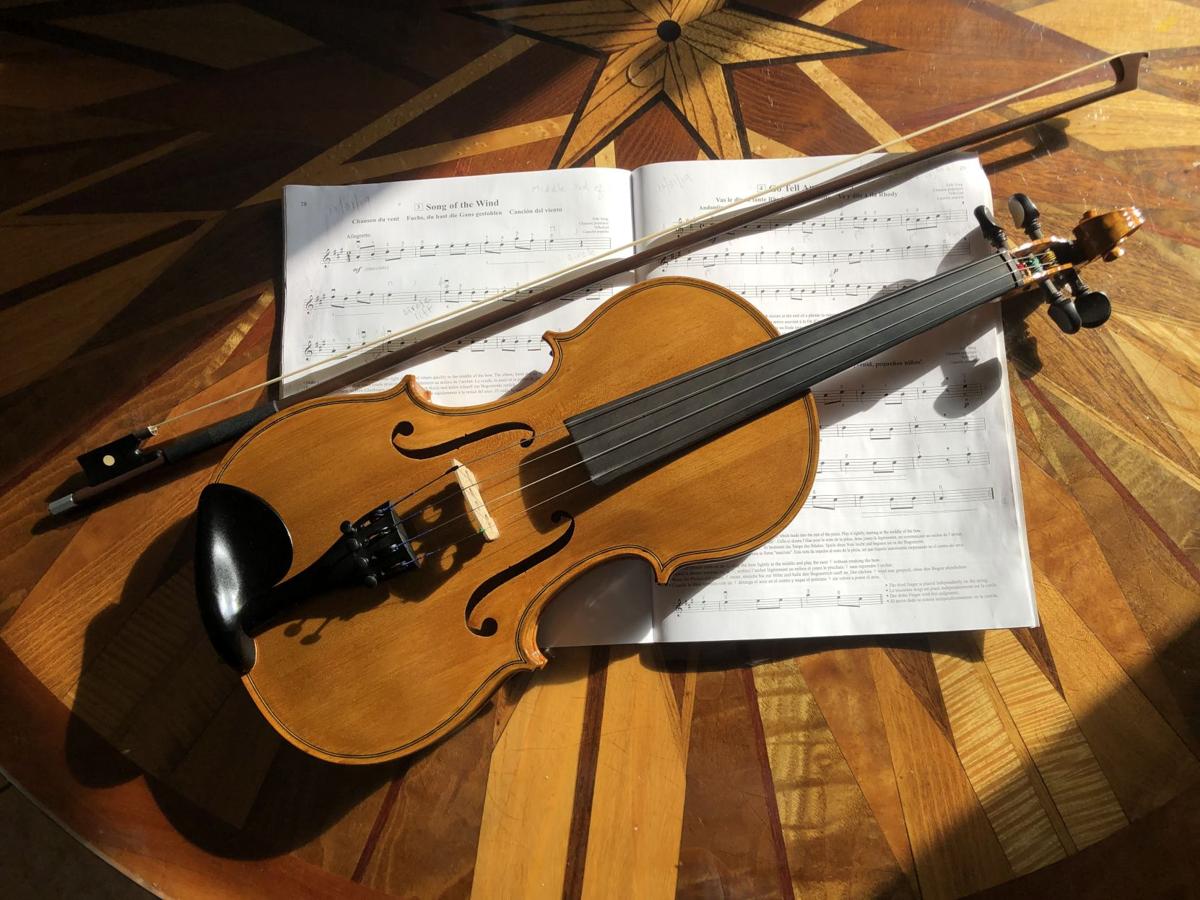 Jillian Kyrou was 13 years old when she received an unexpected gift from her grandfather - a handcrafted violin. This wasn’t just any violin though; her grandfather made it himself.

In his retirement, Kyrou’s grandfather had become an amateur luthier (a maker of stringed instruments), and used his newfound passion and skills to give his granddaughter this one-of-a-kind gift. Except Kyrou didn’t play the violin. In fact, she didn’t play an instrument at all.

“As a 13 year old, I felt like I was far too old to be learning a new instrument. All of the other kids had started to learn in the fourth grade. I just felt behind the ball, and of course as a teenager, my confidence wasn’t super high,” recalled Kyrou.

Though greatly valued, the violin laid dormant in its case for the next 20 years. Despite not playing her grandfather’s violin, Kyrou always treasured the gift and thought it could be something that maybe her children would use one day.

Fast forward to the summer of 2018. Kyrou, now in her mid-30s and a mother of two daughters, ages 5 and (almost) 2, showed her grandfather’s violin to a friend who was a musician.

“When he looked at it, he had glowing reviews, especially about the hand-carving on the neck,” said Kyrou. Her friend ended up taking the violin for a little maintenance after nearly 20 years in a case. He restrung it, tuned it up and gave it a little attention.

“He actually ended up borrowing it for a little bit to play himself because he loved the tone that it had.” Kyrou continued. “My grandfather passed away in 2006, and it was really a point of pride to hear a semi-accomplished violin player take it and say ‘wow this is something really special.’”

After this experience, she decided her 13-year-old self was wrong. It wasn’t too late at all.

“I mean it felt a little crazy being 35 years old with two children, but in a way, watching them learn everything from scratch kind of puts it in perspective for you. There is no shame in being a beginner. So I made the decision to at least learn some fundamentals,” said Kyrou.

For help, Kyrou reached out to Richland Academy of the Arts. Kyrou has taken her oldest daughter to Richland Academy of the Arts for nearly two years for various classes and is always impressed with everyone she meets. “I really can’t say enough about every staff member that I’ve come into contact there. They all have a true love for what they’re doing and a true love for teaching others,” said Kyrou.

“Sarah’s ability to capture the attention of a room full of 15 4-year-olds at the same time is just impressive,” noted Kyrou. “When we first started taking her (Kyrou’s oldest daughter), I thought ‘I don’t know about this.’ They looked like little bumble bees bouncing around everywhere. But Sarah is so gifted with them. Each time I see my daughter coming away with more confidence and more knowledge.”

Kyrou said that seeing her daughter’s confidence and excitement grow with each class and course has been one of the most rewarding things to witness as a parent. It was also a huge encouragement for Kyrou as she began her own journey with Richland Academy of the Arts.

“The same aptitude I see in my daughter when she’s taking concepts that she’s learned from the first class and applying it over and over again is the same thing that I hope to do!”

Kyrou started taking private violin lessons with Richland Academy of the Arts Instructor, Helga Rein, weekly in September. “I told Helga when I started that if I could simply play Turkey in the Straw for my children, I would feel pretty good!,” said Kyrou.

It’s been hard getting started, but Kyrou said it’s also been completely worthwhile.

“The first time I was able to play through a song on my violin was incredibly rewarding, especially given where it (the violin) came from.” She continued, “Playing a song on the violin that he made after thinking I’d never be able to play it … It made me feel connected to him in a way I can’t really describe.”

Kyrou noted that she wouldn’t be able to take this leap without the overwhelming support of everyone around her. “My family has been so supportive. My children are very sweet to listen to me practice because the truth is, it’s not always pleasant!,” said Kyrou.

It’s not just her family’s support that has kept her going. Her instructor is a huge voice of encouragement. “Her approach to instructing an adult has been very supportive and very patient,” said Kyrou. “Helga is a phenomenal musician and has studied under the first chair of the Cleveland Orchestra, but she doesn’t place any pressure on me.”

Rein continuously reminds Kyrou that she wants playing the violin to be something that is fun for her, a concept that is sometimes hard to embrace in today’s culture. “Sometimes as mothers making extra recreational time for yourself can be difficult,” said Kyrou.

The overwhelming support of everyone around her has reminded her that it’s OK to do something fun for herself. “It’s really nice because you can free yourself of any expectation. I’m doing this for my enjoyment, and that’s okay!,” said Kyrou.

“We have this idea that by the time you’re 35, you’ve learned all you really need to know. You’re just doing what needs done - working, raising a family, this and that. Being able to reconnect with the creative capability in me has been incredibly rewarding,” noted Kyrou.

When asked what she would say to anyone who feels regret from not learning something new when they were younger Kyrou said, “It’s truly never too late. Sure, studies have shown how beneficial it is for kids to learn dance, music, etc. when they are really young, and that is true, and you should definitely encourage your kids to do that. But there are also so many studies that show the physical, mental and emotional benefits for adults of all ages that come when you push yourself out of your comfort zone to learn something new.”

Kyrou continued, “The confidence boost you get from it is amazing! I’ve had rough weeks where it doesn’t come as easy as the week before, but I go back anyway. I talk to Helga, and every time I have that breakthrough where the next week is easier and enjoyable. As adults sometimes we can get in a state where we are so used to being proficient at everything, so we kind of need to be put in a position where we don’t know what we’re doing. Where you ask yourself ‘why am I doing this?’ Then you pick up your instrument to play, and you don’t need an answer. It’s its own answer.”

Richland Academy of the Arts offers group classes and individual lessons in music, art, theatre, dance as well as martial arts and self defense. Whether you’re looking for a class for your toddler or you are in your 30s or 80s, contact Richland Academy of the Arts at 419-522-8224 or visit www.richlandacademy.com to learn more about upcoming classes. Find out how you can get started on your own journey of self-discovery through the arts.