BELLVILLE -- This year’s Bellville Street Fair won’t feature a line of food trucks along Main Street, but there’s still a way to get your fair food fix.

The Fair Food Frenzy in Bellville will feature 24 food truck vendors, parked at various locations around town Thursday through Saturday.

The Food Frenzy is not organized by or affiliated with the Bellville Agricultural Society or the fair board, but it will coincide with this year’s fair week. 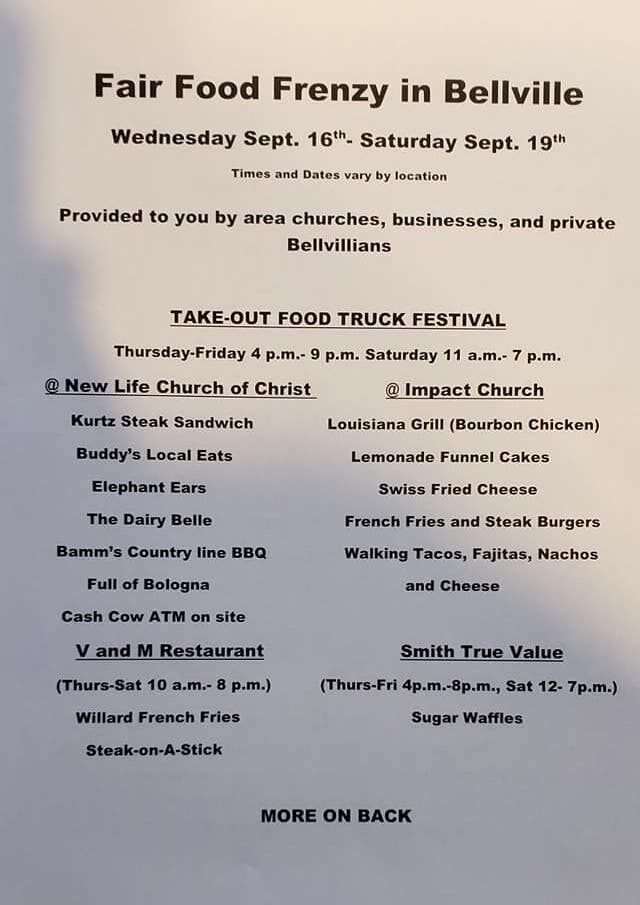 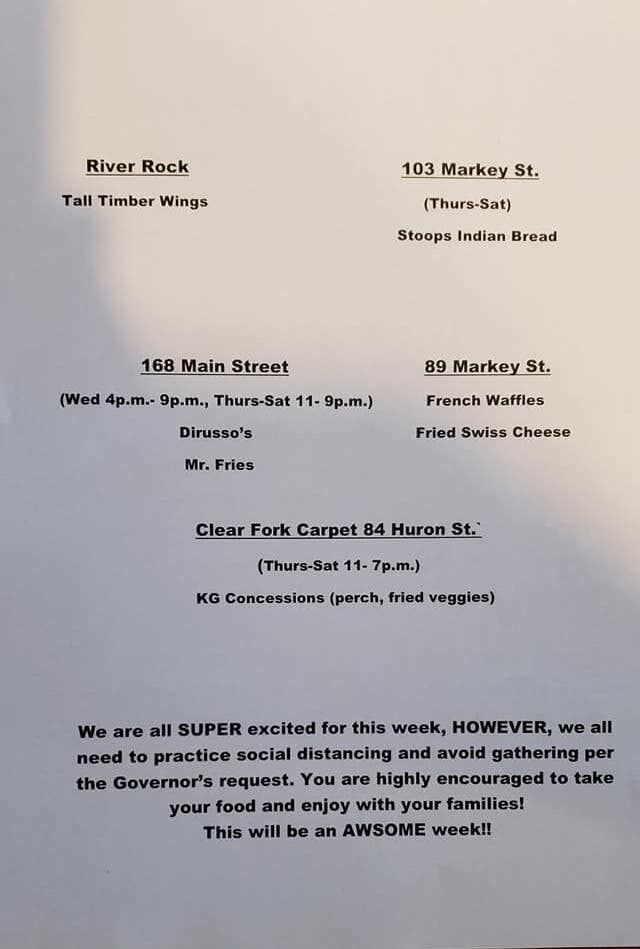 The initiative was started by various community members, including Jason Sharp of New Life Church of Christ.

“It started out with our church hosting six trailers,” Sharp said. “We wanted to provide something for not only our community, since the fair was canceled, but also for the vendors who have lost so much this year.

"It turned out that several in our community had the same idea as us.”

Shortly after New Life announced it would host food trucks, other churches, businesses and even private residents started inviting vendors to their parking lots. Sharp posts info including vendors, times and locations on the page Take-out Food Truck Festival.

Sharp said the goal is to provide a fun, safe way for people to enjoy fair food. Participants are encouraged to take their food to-go, practice social distancing and avoid gathering.

Many of the food trucks and trailers are regular staples at the Bellville Street Fair. Gloria Stoops will be there with Stoops Indian Bread, a food truck that makes regular appearances at events in Ashland, Richland, Knox and Morrow Counties.

Creative solutions, like operating in parking lots, have been crucial to the survival of food truck operators during the pandemic. Stoops has had to rely on food truck revenue this summer. Her other source of income, an eatery in Hayesville called The Olde 30 Inn, has been closed since March 15. The diner is too small for social distancing, so she'll reopen it once the pandemic restrictions are lifted.

Stoops said she wishes there could be regular fairs this year, but she's grateful to the businesses and individuals who have allowed her to park her truck and do business on their property. Her grandson, Garrett Stoops, agreed.

"I was very thankful when people started reaching out to us to bring the trailer certain places," he said. "I knew her main source of income was going to be the food trailer this year. When I heard all the fairs were going to be cancelled, I didn't know what she was going to do."

Buddy Edwards, who bought his first food trailer earlier this year, described it as a tough, but manageable year for food truck vendors.

"We've been fortunate enough for businesses to let us set up where we can. I'm thankful for all the people helping out small businesses," he said.

Only one of 14 events he was scheduled to attend this year actually took place.

Edwards bought a trailer and launched Buddy's Local Eats after working 10 years for another food trailer operator. He spent the last three years managing a truck, then decided to strike out on his own. Using products from a local meat processor, the Danville resident serves up pork tenderloins, burgers, shredded chicken and his signature smoked brisket burger.

Both he and Stoops will be in Bellville this week, along with at least 22 other vendors. The full list of vendors and locations is included below.

Willard French Fries and Steak on A Stick at V & M Family Restaurant.

Festival hours are Thursday and Friday from 4 to 9 p.m. and Saturday from 11 a.m. to 7 p.m., though times vary slightly at some locations.