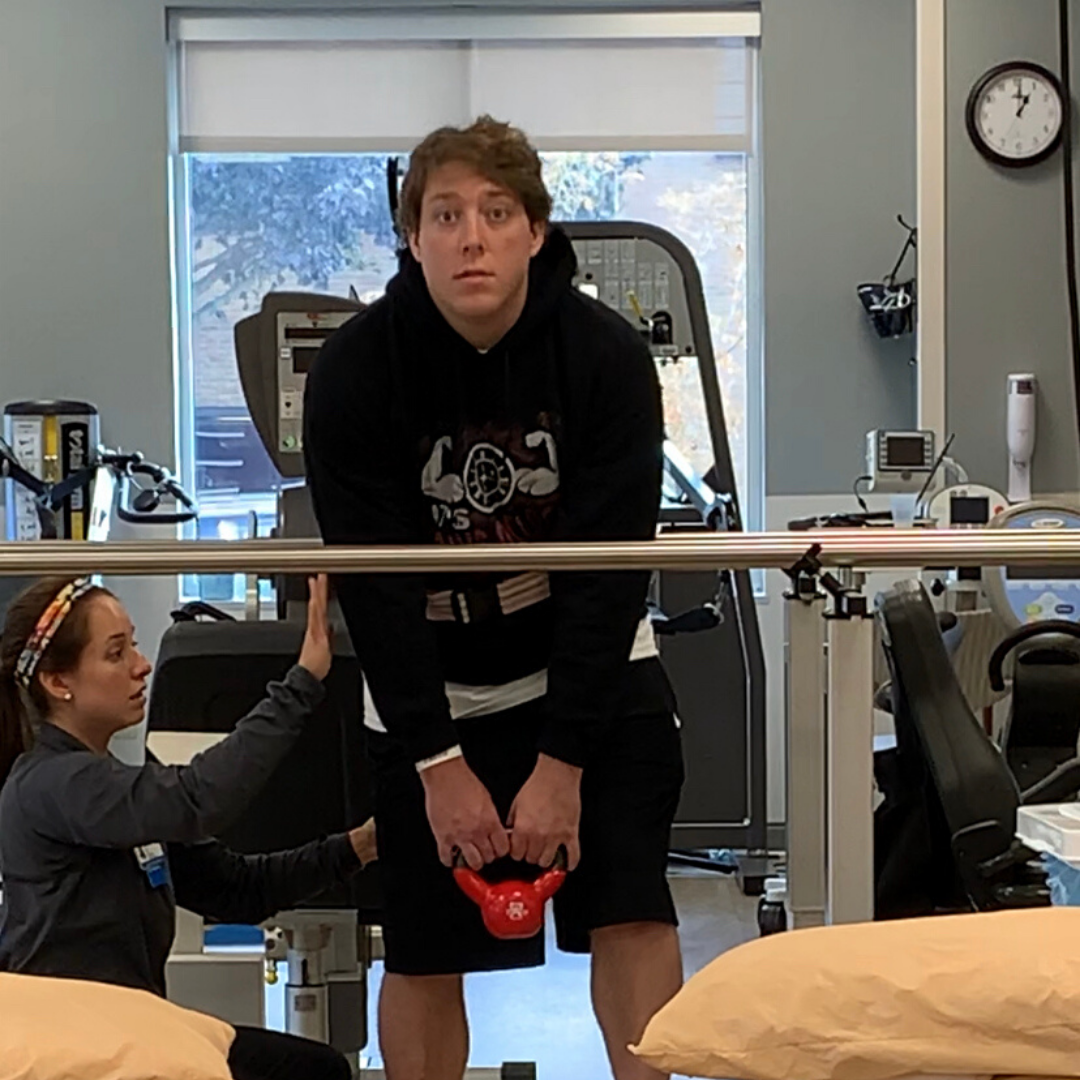 Spencer Parsons works on balance and strength exercises with a therapist. 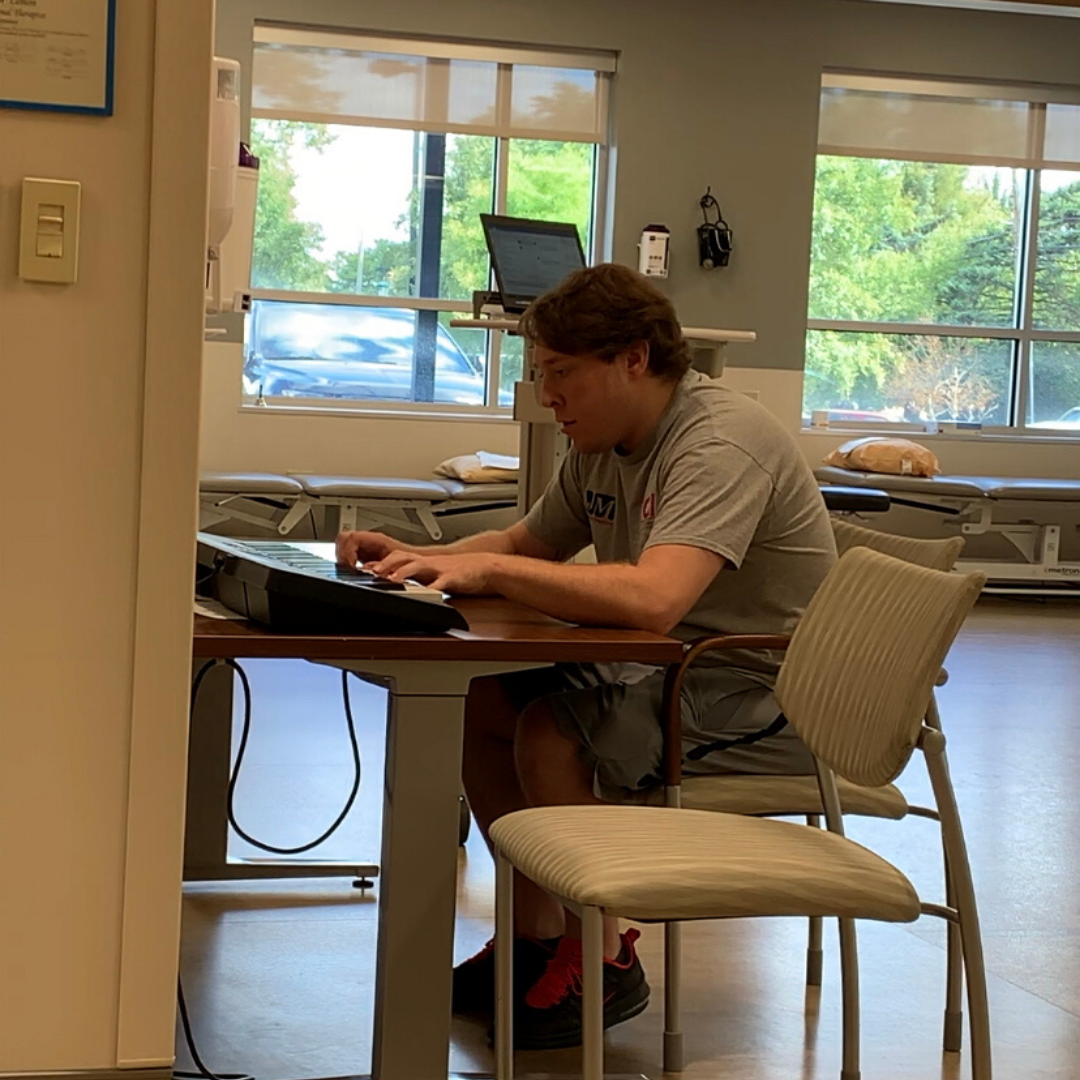 Spencer Parsons works in therapy on playing the piano again in Upper Arlington. 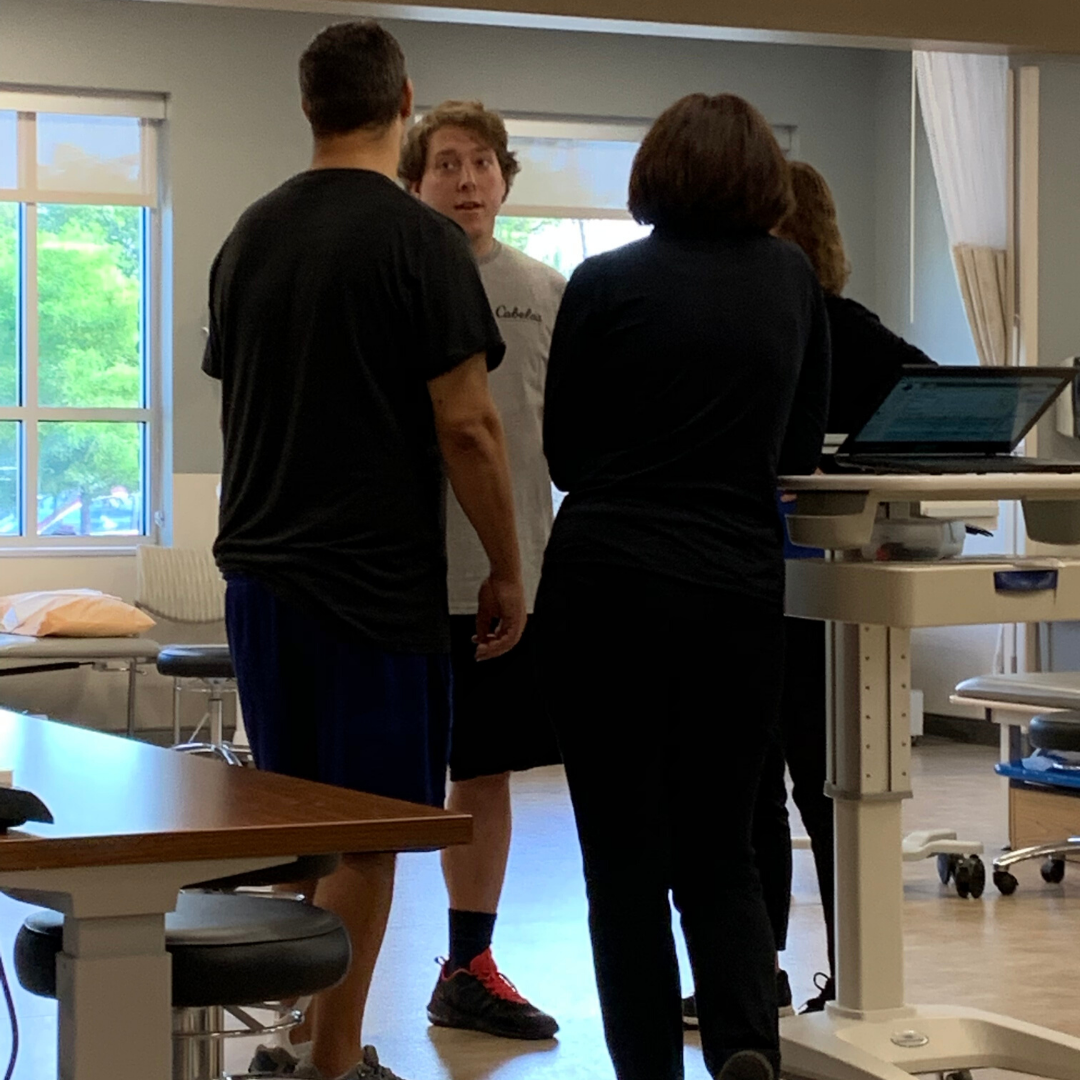 Spencer Parsons helps a young patient who had a similar stroke recently. 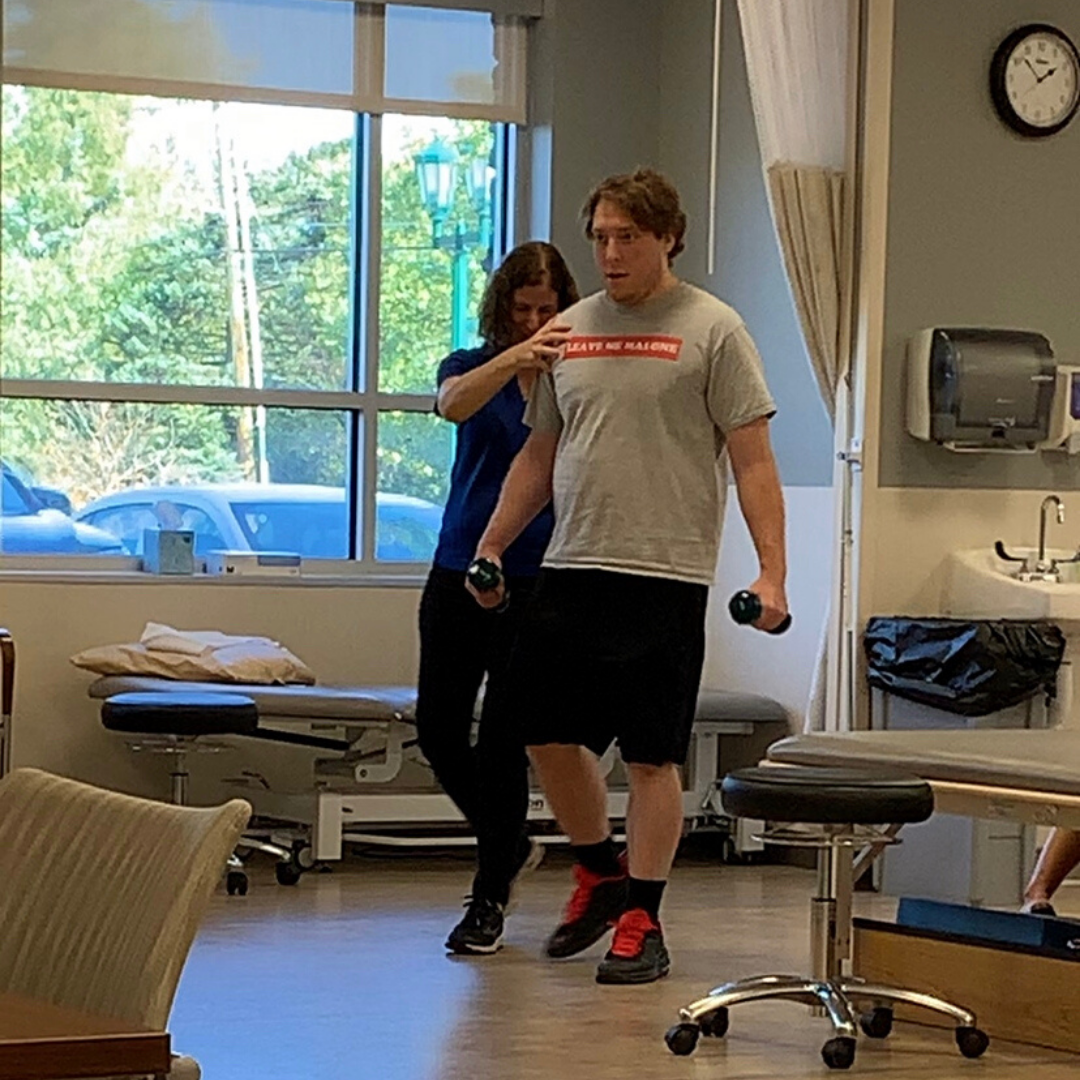 Spencer Parsons works in a therapy session in Upper Arlington.

BELLVILLE  -- Spencer Parsons was just like any other young man his age. The 23-year-old was starting a career, hanging out with friends, gaming and just starting to live his life.

That was the plan until March 1.

Spencer, a surgical nurse at Knox Community Hospital in Mount Vernon, was looking forward to the weekend.

As he saw the clock hands inch to the end of the workday, the lead surgeon announced to the team that additional time would be needed to finish the surgery. All nurses on call would have to stay.

Spencer was one of the nurses on call that day. The weekend wouldn’t come for awhile longer.

Although disappointed, the young professional readied himself the call for the next surgical instrument.

About 20 minutes into the surgery, the surgeon asked Parsons for the next instrument, but the nurse couldn’t remember what it was.

Since he had never experienced anything like that, Parsons told the surgical staff, that he “felt weird.”

At first, the surgeon thought Parsons was just joking and said, “Quit messing around and give me the instrument!”

Suddenly, his head, neck and face began to feel hot. Seeing that he had turned beet red, an assisting nurse gave Parsons an alcohol towel to help cool him down.

“I felt like acid was being thrown into my eyes,” Parsons noted.

After feeling like this, what seemed like a long time to him, Parsons fell down and hit his head on a leg of the surgical instrument table.

Immediately, staff members attended him, assessing him and proceeded to sit him up against the wall.

Suddenly, “I postured up, feeling my entire body stiffening and shaking,” said Parsons. “I couldn’t swallow and I was foaming at the mouth.”

It immediately became clear that Parsons was experiencing a stroke . . . at age 23.

NURSE BECOMES PATIENT: By then, everyone knew the young nurse himself had become a patient and quickly wheeled Parsons to the emergency room.

Although conscious in the ER, Spencer was baffled by what was happening to him.

While he was being tested with lab work and a CT scan, his parents were on their way from two separate locations. His mother, Debra Parsons, also a nurse, arrived first. His father, Dean Parsons, a Physician Assistant in Columbus, arrived a little later.

“After reviewing his CT scans, they appeared normal and doctors could only conclude at that point that he was seizing, but didn’t know why,” Debra Parsons said.

It was then that the ER doctors at Knox Community Hospital decided to rush Spencer via medical helicopter to OhioHealth Riverside Methodist Hospital in Columbus.

Because he was unable to swallow, the flight team ordered that he be intubated.

”A buildup of saliva and possibly vomit could turn a bad situation into an immediately worse one,” explained Debra Parsons, an experienced RN who works for Avita Health Systems.

“Without intubation, he could aspirate his own fluids into the lungs, choke and have difficulty breathing,” she added.

Once at OhioHealth Riverside, Spencer was put on an EEG and an IV drip for the next 48 hours to monitor and prevent any seizure activity.

After the doctors observed he was no longer going to seize, they checked his mental and neurological status. They needed to determine what he could understand, if he could communicate and if he was able to move his body.

Although he could breathe on his own, he was only able to move his eyes up and down -- up for yes, down for no.

After an MRI was ordered, the neurologist determined that Parsons had experienced a massive Pontine Stroke.

Debra Parsons described that “the Pons is located in the middle of the brain stem which is essentially “the main highway of both hemispheres of the brain,”

A pontine cerebrovascular accident (also known as a pontine CV or pontine stroke) is a type of stroke that affects the pons region of the brain stem. A pontine stroke can be particularly devastating and may lead to paralysis and the rare condition known as Locked-in Syndrome .

Only time would tell before the Parsons would learn what areas of their son’s brain had received the most damage.

Although doctors did not find a blood clot or hemorrhage, further testing was done and some elevated lab tests point to a blood clotting disorder as a probable cause for the stroke.

The stroke had damaged 50 percent of the pons had been damaged and doctors were concerned that he was becoming locked-in. All they could do was to keep observing him and hoping for change.

Finally, the moment that everyone hoped for occurred. Spencer began moving. First his left arm, then his left leg, and then he was able to move his head.

After 21 days at OhioHealth Riverside, Spencer was flown to Shepherd Center in Atlanta, a respected neurological and spinal injury facility where he would have speech, physical and occupational therapy up to five hours a day, five days a week.

After a lengthy, challenging and successful stay at the center re-learning things such as; how to speak, use his hands and legs, learn to eat, bathe, dress and walk again he was ready to come home!

The journey was far from over however. He would need to continue therapy.

Three days a week, Spencer and his mother make the journey to The OhioHealth Neurological Rehabilitation - Upper Arlington, a suburb of Columbus.

His therapy consists of four hours in physical, occupational and speech therapy - Monday, Wednesday and Friday.

While Debra Parsons was able to be in Atlanta throughout Spencer’s stay, Spencer’s father Dean Parsons, continued working as a hospital Physician Assistant in Columbus, working two 12-hour shifts in a row. Every third day, he would pack his bags and fly to Atlanta to be with his son and his wife.

“We were overwhelmed by the support we received through the generous donations, compassion and help,” Debra Parsons said. She added that the GoFundMe account would be suspended as they had passed a financial hurdle. She added that her mother has also been a huge help doing housework, laundry and cooking meals.

Though he is currently a Bellville resident, Spencer had been a Crestview student most of his life before his family decided to make an adventurous move to the Outer Banks in North Carolina.

Finding himself retired, Spencer’s dad, Dean, ran across an opportunity to practice medicine in the place they had vacationed for several years. So, on Nov. 1, 2010, Dean started his new career as a Physician Assistant at The Outer Banks Hospital and Spencer and his mom joined him.

As a student at Manteo High School in Manteo, N.C., Spencer became involved in school activities, including wrestling and football.

Along with sports, he joined the choir at Manteo. He had always loved music, but became entranced in performing in front of an audience.

Subsequently, he became involved in the drama club and eventually earned the lead part as Curly McLain in the musical “Oklahoma.”

After Spencer graduated from high school, Dean and Debbie Parsons decided to go back to Mansfield.

Spencer, however wanted to stay to pursue formal training in music. Music school was very expensive so he decided, like many young people, to break out on his own and attempt a musical career. His parents, however, convinced him to obtain his nursing license - “Plan B.”

Interestingly, the whole Parsons family works in the medical field. Spencer’s brother, Miles Parsons, is the CEO at Mansfield Memorial Homes; and, his sister, Emily Christy, is an LPN.

After graduating from nursing school in North Carolina, Spencer returned to Mansfield to pursue his nursing career. It didn’t take long for him to land a job at Knox Community Hospital training in the surgical department.

After working for a period of time, he bought his first house in Bellville enjoying time with friends and family and continuing his love of music, including the acoustic guitar.

Recently, doctors were finally able to diagnose the cause of Spencer’s stroke which is called Antiphospholid Syndrome, an autoimmune blood clotting disorder.

The Parsons family is relieved and feels fortunate that his progress continues to improve daily.

In fact, Spencer recently began the process to drive again through the Neuro Rehabilitation Center in Upper Arlington. Driving is the ultimate definition of independence for any adult, but has an extra special meaning to Parsons and others who experience similar debilitating circumstances.

BACK TO WORK: Since early August, Parsons started back to work two days a week, doing the job he loves at Knox Community Hospital. The best part is that he is no longer the patient, but the same surgical nurse who thrives at resuming his career.

The extended surgery case on March 1 was the only thing that kept Spencer from driving at the time of day his stroke occurred. He was in the right place after all.

Parsons looks forward to living back in his own home in Bellville. Not only that but revisiting his talents and interests in music, gaming and hanging out with his friends.

And with a satisfied and relieved tone in his parent’s voice - “Just living his life as any 23-year-old should.”