SHELBY — Officer Keith Swisher has officially been reinstated as a coach and school resource officer with Shelby City Schools a month after being placed on administrative leave.

On Sept. 27, the Shelby Police Department was notified by Shelby Superintendent Tim Tarvin that a teacher had overheard a conversation between two students that Swisher, in his capacity as head coach of the girls' soccer team, had walked through a room serving as the girl's locker room at the Field House while either soccer or cross country girls were present.

Swisher was immediately placed on paid administrative leave by the Shelby Police Department and suspended from his coaching duties by the Shelby City Schools while an investigation was conducted.

After both a criminal and internal investigation was conducted, Swisher was disciplined and reinstated to full duty with the Shelby Police Department. According to Superintendent Tim Tarvin, Swisher resumed his duties with the school on Oct. 25. 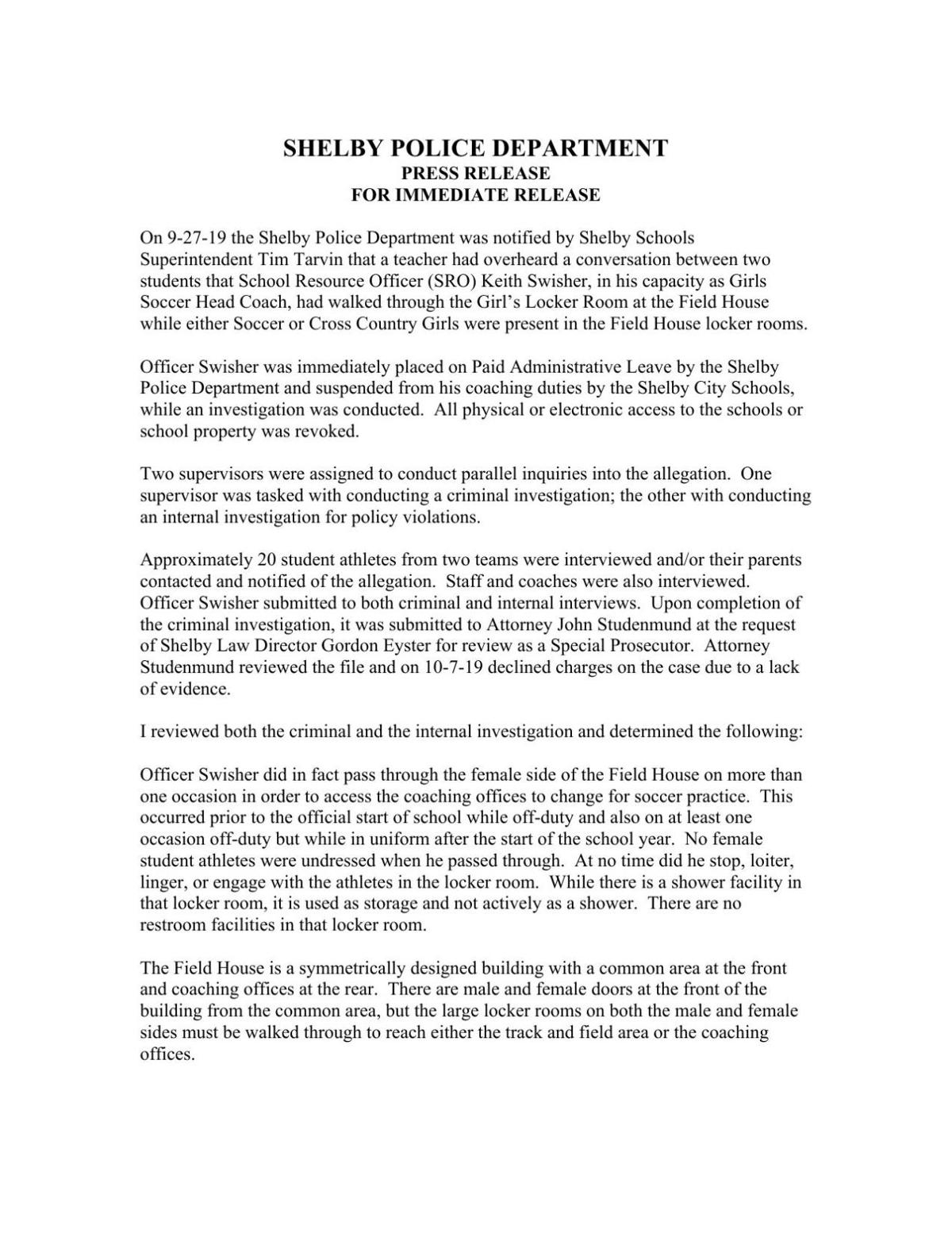 Approximately 20 student athletes from two teams were interviewed and/or their parents contacted and notified of the allegation, according to Combs. Staff and coaches were also interviewed, and Swisher himself submitted to both criminal and internal interviews.

Upon completion of the criminal investigation, it was submitted to attorney John Studenmund at the request of Shelby Law Director Gordon Eyster for review as a Special Prosecutor. Studenmund reviewed the file and on Oct. 7 declined charges on the case due to a lack of evidence.

As a result of the internal investigation, Swisher was disciplined and received documented cautioning and instruction for not following departmental rules, Combs said.

Swisher has been counseled on accessing the offices using only the male locker room access and to announce his presence and/or have another staff member with him at all times when it is necessary to access a female-only portion of any school or other building.

The Shelby Board of Education held a special meeting on Oct. 15 and discussed in executive session "the discipline, dismissal or investigation of charges or complaints against a public employee." No action was taken at the conclusion of the executive session.

More than 40 citizens attended the special meeting where the board allowed 30 minutes of public comment overwhelmingly in favor of reinstating Swisher as the SRO and girls' soccer coach, including statements from Swisher's wife, players on the soccer team, and Shelby Mayor Steve Schag.

"I call him my second dad because he taught me so much this season," said player Brooklyn Gwirtz on Oct. 15. "It would be sad if he didn't come back as a soccer coach, because I know I learned so much from him this season, and I'm pretty sure all these girls would say the same thing."

Swisher started employment with the Shelby Police Department in June 2001. He has served as the School Resource Officer for Shelby since 2017.

The Shelby Board of Education took no action after a special meeting on Tuesday to discuss the future of a public employee of the school.