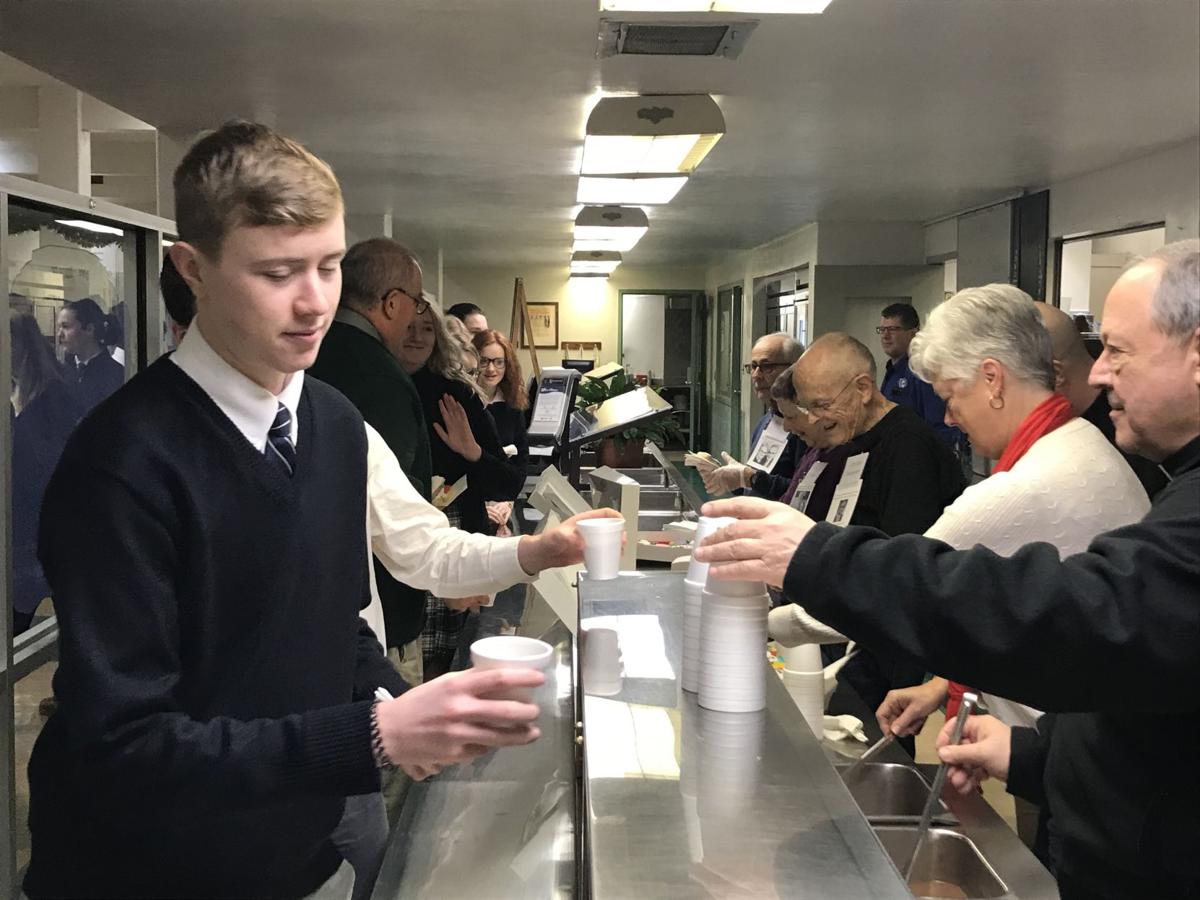 Father Gregory Hite, far right, serves hot chocolate to St. Peter's High School students on Wednesday morning as a salute to the "Cocoa Ladies" dating to the 1930s at the school. 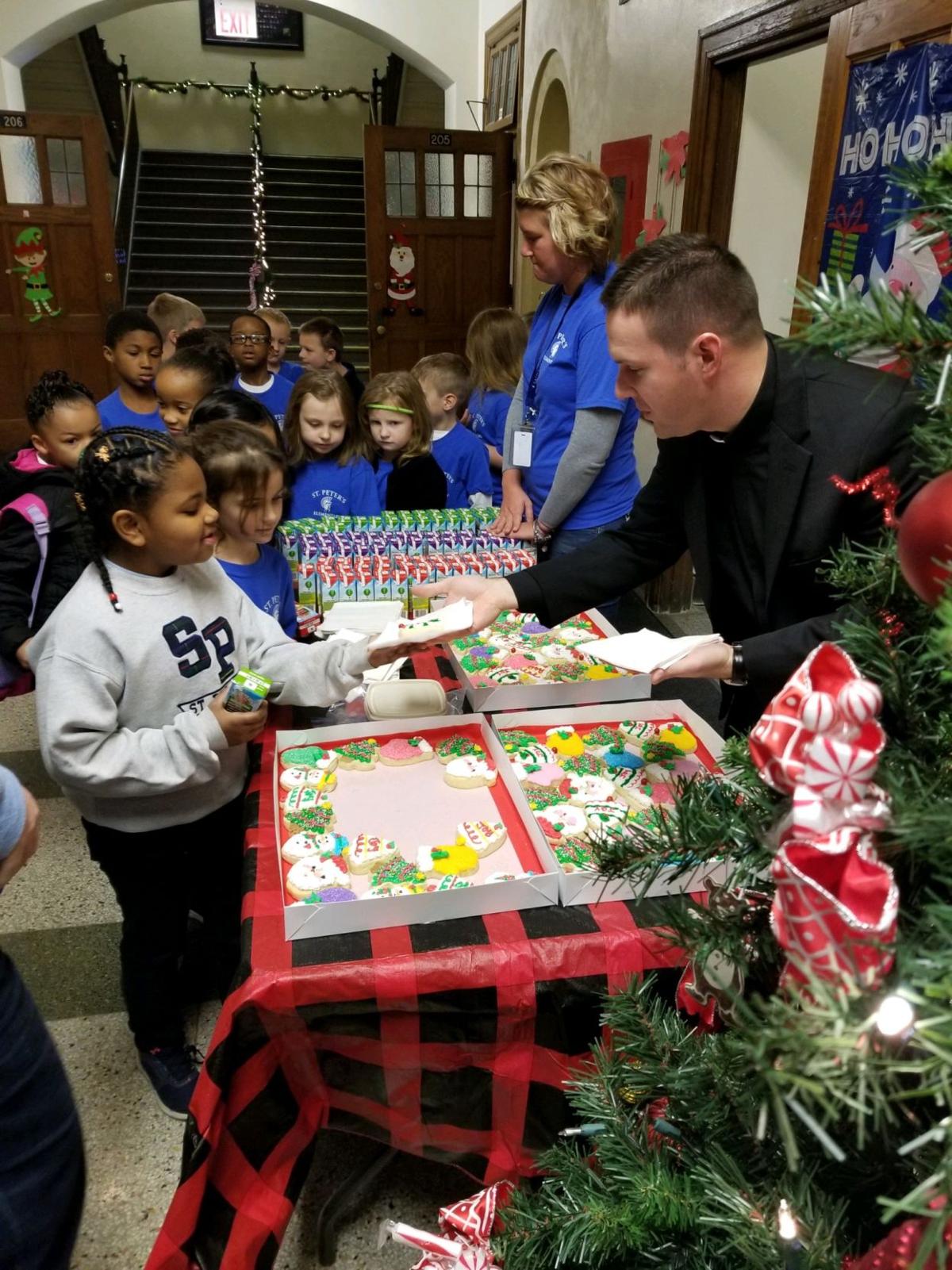 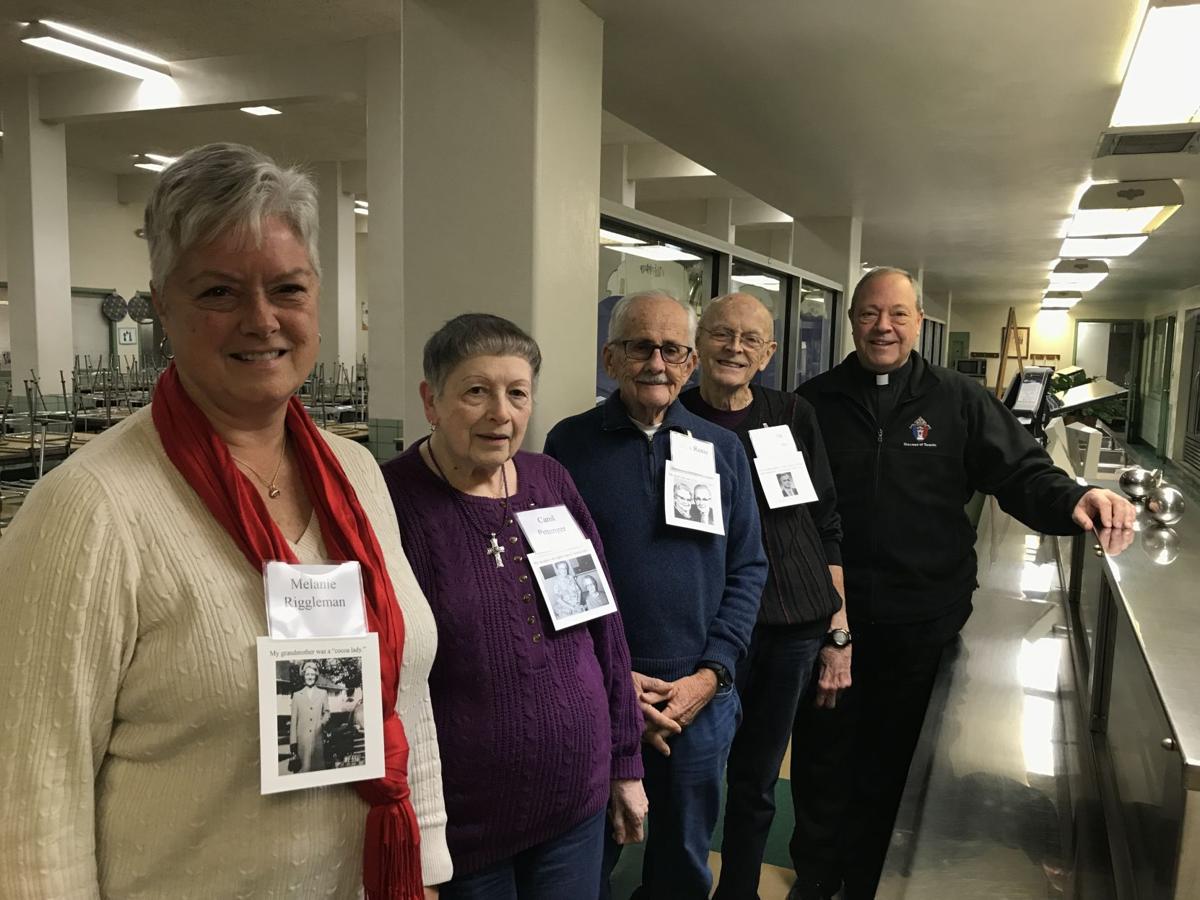 St. Peter's volunteers helped serve cocoa to students and staff in a tribute to the "Cocoa Ladies" on Wednesday at St. Peter's Schools.

MANSFIELD -- In continuing celebration of this year’s 175th anniversary of St. Peter’s Parish, Father Gregory Hite chose to honor the memory of the “Cocoa Ladies” with a special event for the school students on Wednesday.

Who were the “Cocoa Ladies?”

They were the women of the parish — many of whom had children in school — who, beginning in the 1930s, served hot cocoa to the students after the daily 8 a.m. Mass on school days. Fasting to receive Holy Communion at that time began from midnight the night before so students did not eat breakfast.

Following Mass, students would go to the church basement for hot cocoa that was prepared in the large copper boilers and enjoy toast or jelly sandwiches brought from home.

With the completion of the new and current high school building, cocoa serving in the church basement was discontinued and small bottles of milk and donuts were made available for the children after Mass.

Stimmler’s Bakery is no longer in business so students enjoyed beautifully decorated Christmas-themed cut-out cookies. Joining Father Hite and Father Austin in the serving line were four parishioners whose family history is connected with the “Cocoa Ladies.”

Melanie Riggleman’s grandmother, Dick Renie’s mother, and Carol Pittenger’s mother and aunt were among those ladies many years ago who helped prepare and serve cocoa as well as wash the cups that were used each morning. Interestingly, when the Leland Hotel changed its china, they donated the old china to St. Peter’s and the cups were used for cocoa.

As a school student years ago, Dr. John Heringhaus was a server at the 6:30 a.m. Mass so he waited around after Mass to join his classmates for the 8 a.m. Mass to begin the school day. He would use that down time in between masses to help the ladies in the kitchen.

As St. Peter’s Parish continues the celebration of the 175th anniversary, other opportunities to highlight the history will be scheduled.

MOESC recognizes board members for school board recognition month

MANSFIELD - The Richland County Foundation announces its college an…

MANSFIELD – Another successful Richland County Spelling Bee is in t…

Mansfield school board focuses on updating safety in buildings

MANSFIELD -- Mansfield Spanish Immersion may be soon be the safest …

MANSFIELD -- The Renaissance Education Department will continue its…