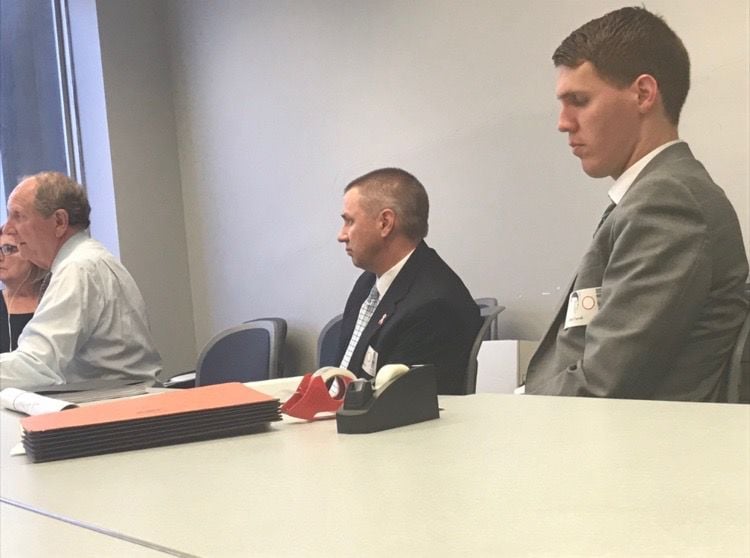 Robert W. Kuehnle (center) listens Monday during day three of his hearing with the Ohio Department of Education. 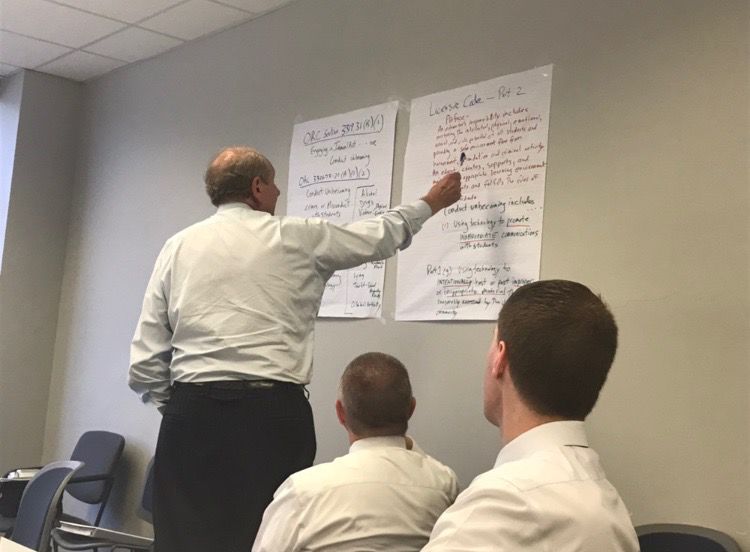 James C. Carpenter, representing Robert Kuehnle, makes a point Monday during the third and final day of a hearing with the Ohio Department of Education in Columbus.

COLUMBUS -- A hearing that could affect the license of Mansfield City Schools Treasurer Robert W. Kuehnle concluded Monday, with attorneys for both sides offering closing arguments.

At the end of the day, hearing officer Paul Stenura said he would make a recommendation in 30 to 60 days to the Ohio Department of Education.

The alleged violations occurred several years ago when Kuehnle worked as the treasurer for Benjamin Logan Local School District.

"I asked someone close to me about what would happen if a teacher in their district had done what my client did, and he said he'd have gotten an award," Carpenter said.

Carpenter said an educator's responsibility is to nurture the intellectual, emotional, physical and civic potential of all students, according to the Ohio Licensure Code.

However, Hollern said, the allegations against Kuehnle were behaviors and encounters "unbecoming of a professional where he failed to maintain professional relationships with students in the district."

Those interactions included tweets with multiple female students and a lunch with a student, which occurred in the summer of 2013.

Carpenter spoke for nearly 45 minutes in defense of his client, re-telling Kuhenle's side of the story.

He mentioned a tweet to Student 1, which was published around 2 a.m.

"State evidence shows that they (any of the tweets discussed over the three-day hearing) were not inappropriate. The time of a tweet is not the important part of the tweet. It's the content and it's the intent to promote communications," Carpenter said.

He added the tweet at 2 a.m. was bad judgement, and his client admitted that during testimony, but it was also pure human emotion because he saw the student was awake and struggling to go to sleep, he said.

"He responded, 'Me too,'" Carpenter said. "That's a very human thing to do. In fact, it's a very normal thing to do. We heard earlier the board president and the superintendent (of BLLD) didn't find any of these tweets inappropriate."

Hollern argued another tweet sent to Student 2, which includes the phrase 'Tall, blonde and beautiful' was inappropriate, even if it wasn't meant in a suggestive way.

"An administrator should not be participating in inside jokes with a student," she said.

"He asked the parents' permission, he got a female teacher to go with him so he wasn't alone. They picked up the students together and dropped them off," Carpenter said, pointing to hand-written posters of state licensure code, noting it is an educator's job to nurture students intellectually, emotionally and socially.

"If I had a child who wanted to go to the symphony, and a teacher asked to take them... I mean. wow," Carpenter said.

Kuehnle's attorney also brought up the treasurer bringing cupcakes to the students he took to the symphony, as was discussed during days one and two of the hearing.

"Did I hear he should lose his licenses because he brought cupcakes to school and didn't ask to be repaid? Carpenter said. "I mean, come on."

Carpenter paused and looked at Stenura and said, "At the end of my career, I don't want to have to say one of my clients lost his license because he bought cupcakes and took his students to the symphony."

The continuation of the Ohio Department of Education public hearing concerning Mansfield School District treasurer Robert Kuehnle had been set for next week. The date of the hearing will be Monday, July 15, beginning at 1 p.m. in room 101, said Carolyn Cypret, spokeswoman for the ODE.