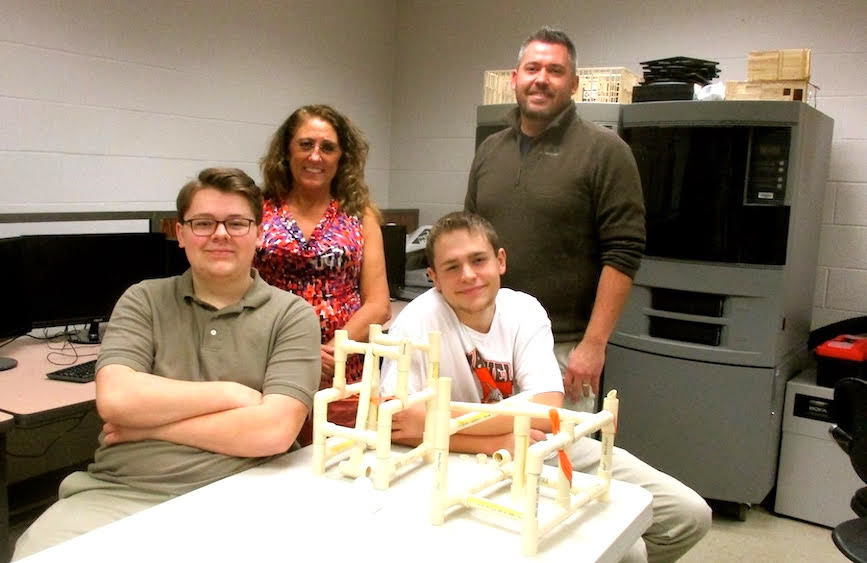 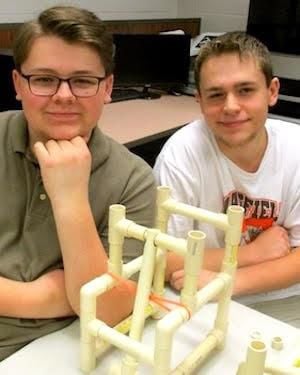 MANSFIELD -- The work of two “level-headed, hard-working” engineering students at Mansfield Senior High School is aimed at benefitting a wheelchair-bound boy in the first grade.

Seniors Tanner Harless and Andrew White are developing two devices that will allow the boy to activate levers from his wheelchair to strike, kick or bat a ball. The completed mechanisms, constructed of PCV pipe, will measure about 3 by 4 feet. Tension on bungee cords will control how fall balls travel.

“I talked to Mr. Cramer about his students building a device that would be a win-win for everyone,” Voedisch said. “It would enable my student an opportunity to participate and improve his gross motor skills in an activity he can do with his peers. At the same time, I thought the project would fit the engineering curriculum.”

“It’s a problem-solving project with many parts. From design to end product, it meets the requirements of a capstone project that seniors are required to complete,” he said.

“it also involves the seven steps of engineering, starting with identifying the design challenge to refining, modifying and perfecting the finished product.”

Cramer turned the project over to Harless and White.

“The first day Mr. Cramer sat us down and said, ‘Here’s what we want to do.’ He said to go online and look everywhere for prototypes,” Harless said. “Anything we found that was close to what we needed was really expensive. Basically, we had to go from scratch.”

That meant coming up with their own ideas.

“We drew rough sketches until we thought the designs looked good,” White added.

Those designs led to the building of two table-top prototypes powered by large rubber bands. One device features a lever which “throws” a plastic ball or, when turned downward, “kicks” it. The other device uses a “bat” to strike the ball.

“We made multiple changes during construction of the prototypes,” Harless said.

“There was a lot of trial and error,” White agreed.

Cramer knew from the start that the seniors would be up to the task.

“Both are level headed, hard-working and very much fun to be around. They’re always coming up with new ideas, which I love,” Cramer said.

White will move on to North Central State College, then to Ohio State University-Mansfield. He’s undecided on a career, but said it may well involve computers or engineering.

The pair now will begin work to construct full-size devices – 3 by 3 feet or 3 x 4 feet – based on the dimensions of their prototypes. That will allow the first-grader to activate them from his wheelchair. Their goal is to complete the work this quarter and deliver the finished products to Voedisch.

“In addition to allowing my student to participate with others and improve his motor skills, I want him to grasp the cause-and-effect of what he can do with these devices,” Voedisch said. “I am grateful to Mr. Cramer, Tanner and Andrew.”

From day one Harless and White worked with the unspoken awareness that the mechanisms they are building will help a special-needs student.

“What we’re doing has to be perfect,” White added.