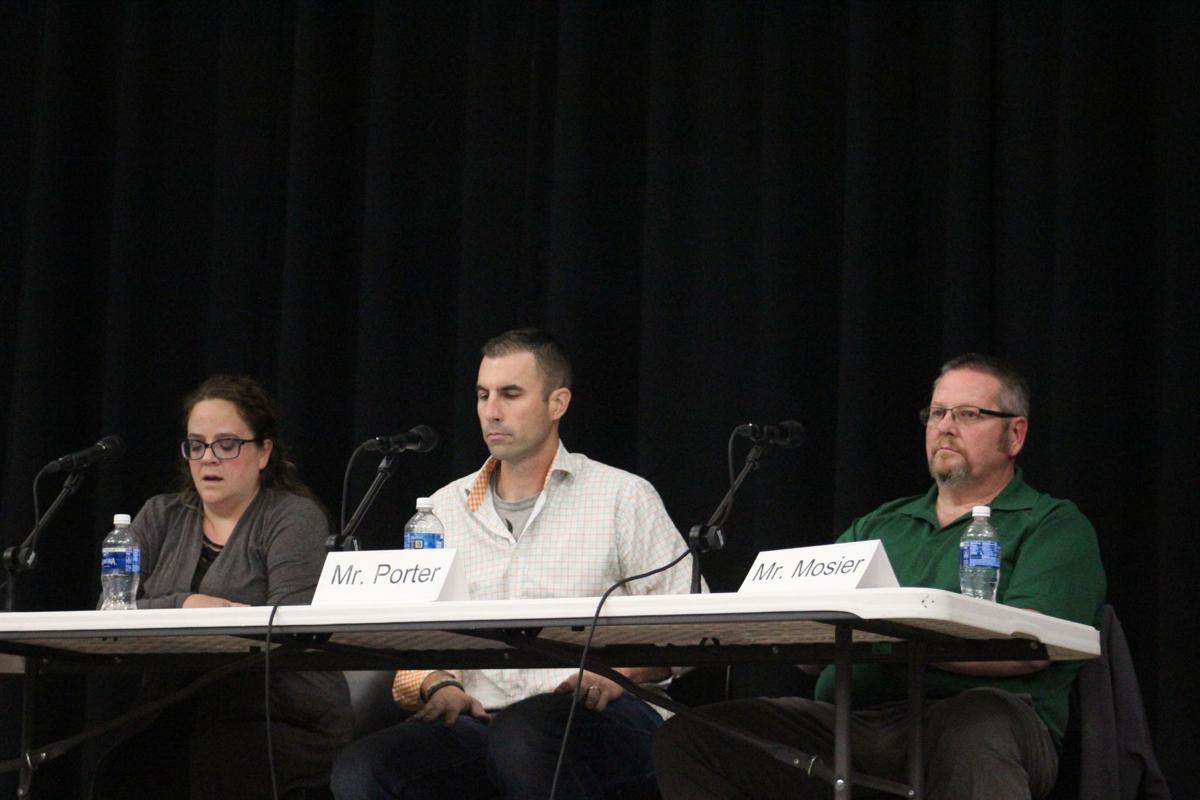 Madison school board candidates Melissa Walker, Adam Porter and Doug Mosier answer questions during a Meet the Candidates night at the middle school. 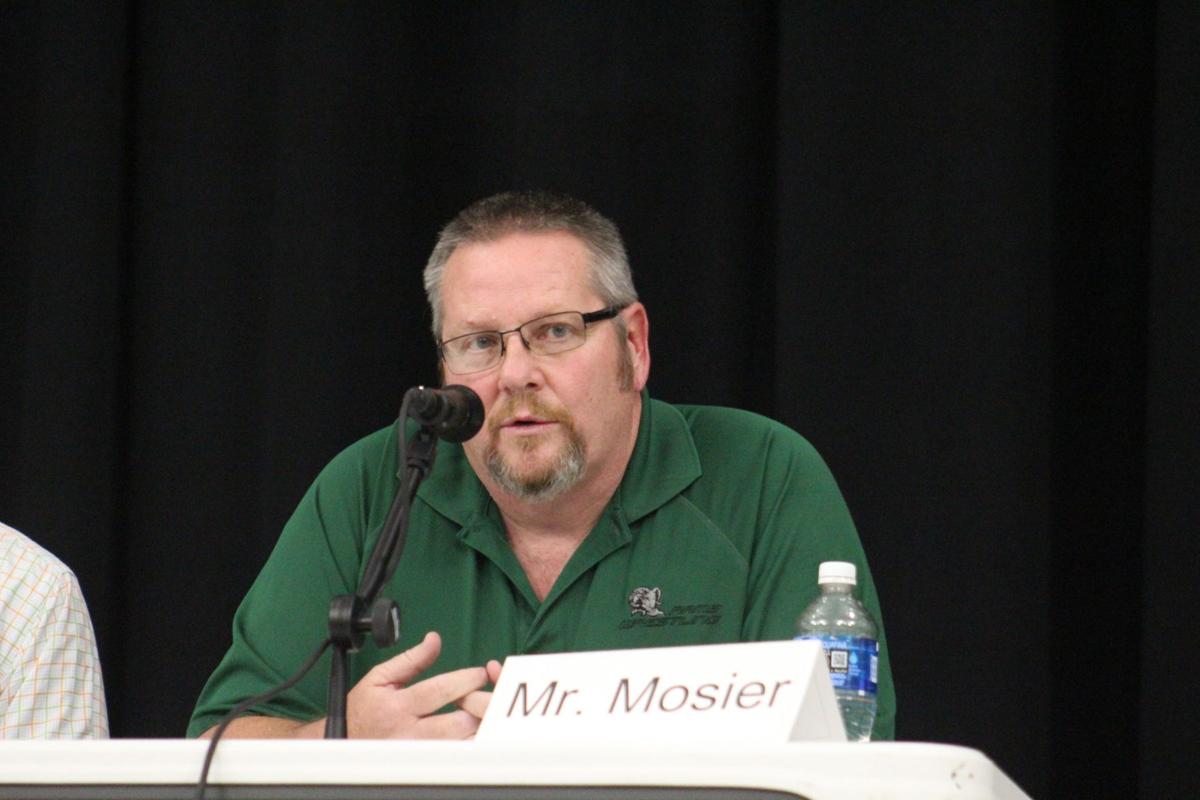 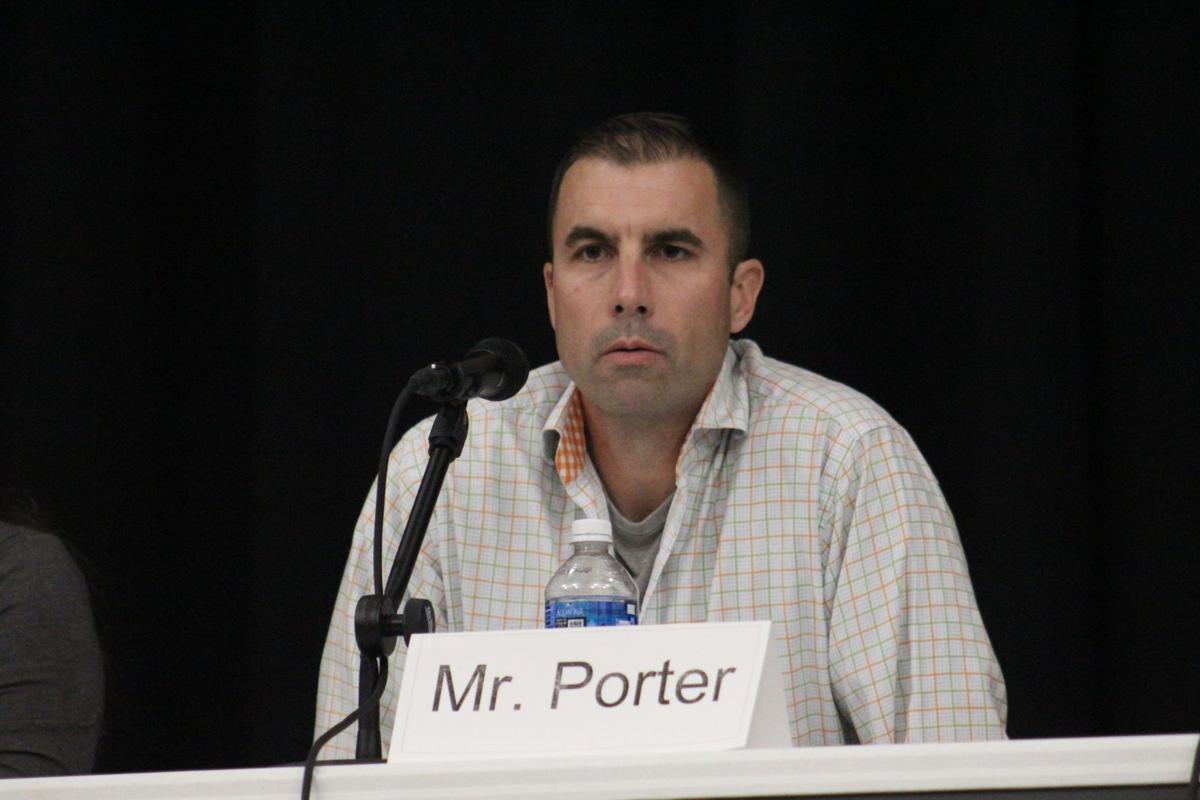 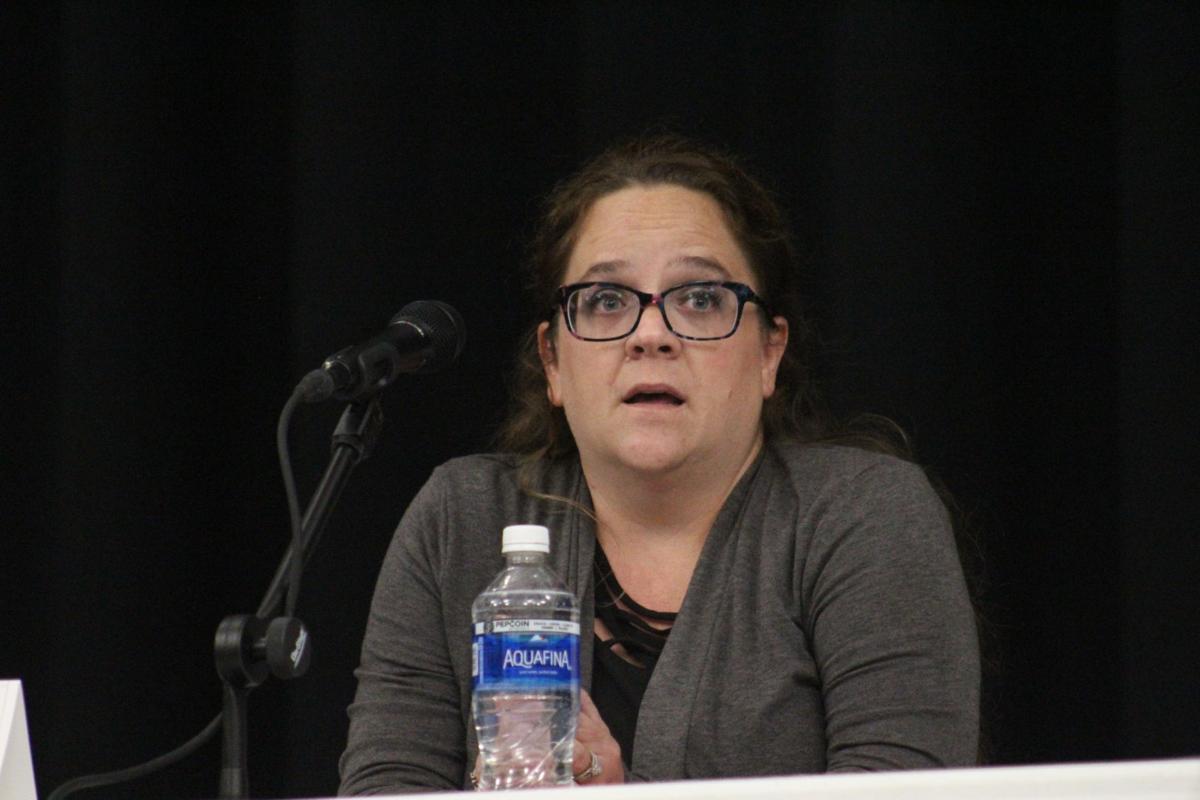 MADISON TOWNSHIP — Three people vying for two seats on the Madison Local Schools board of education answered questions from the community Wednesday night during a Meet the Candidate event at Madison Middle School.

Doug Mosier, Adam Porter and Melissa Walker gave opening and closing statements and answered eight questions, read by seniors Jayla Graham and Josh Shambre. Each candidate had 90 seconds to respond to each inquiry.

Mosier, 56, of 1076 Cairns Road, is a retired corrections officer, retired Madison wrestling and football coach and currently serves as a project staff member with the Ohio Civil Services Employee Association. Mosier said he was running to give back to the district that gave so much to his children and restore a sense of community.

Porter, 41, of 1075 Laver Road is an air transportation master sergeant at the Air National Guard. Porter said he's running to put students "back at the forefront" and improve communication between the board and the public.

Walker, 38, is an employment professional. Walker said she is running because she wants to increase the accountability of the school board and rebuild trust with the community.

All three candidates stated that, if elected, improving communication between the school board and the community would be a priority.

“You have to be willing to go into a room and talk to one another and have respect for one another. The whole ideal is promoting what’s best for the district," Mosier said.

“We can’t all be on the same page if we’re not communicating our needs, our wants and our ideas. I believe I can help instill that sense of communication,” Porter said.

Porter suggested involving the community and its ideas through committees that assist the board -- and sending out community surveys.

The candidates were asked how they would respond if a member of the community reached out to them with concerns and when it would be appropriate to become involved in school-related matters. All three stated they would be willing to listen to any community concerns, but would not act without involving the other board members.

They were also asked how they would respond to negative comments made about the district on social media.

“I would start by reaching out to that community member and offer assistance in being able to interpret the policy that might help them reach the desired result,” Walker said. “I may not be able as a board member capacity to step in. None of us can individually step in a board member capacity. However, I can at least offer direction and we may be able to get the right people in the room to have a discussion.”

“I would be willing to reach out to the community member,” Porter said. “Assuming that I’m working individually … I’m not going to answer for the school board in that situation. I would make sure that they know that ‘this is my opinion, this doesn’t represent the board per se.’”

Prospective board members were also asked how the district could go about improving its state report card. Madison Local Schools received a ‘D’ overall last year.

Mosier said the board should support teachers’ efforts to offer extra help to students before or after school and during study hall. He also suggested improving services for students with special needs.

Walker agreed, saying the district should try to have more behavioral specialists available to special needs students and said identifying the most pressing issues in the district would require an “inclusive conversation” with teachers.

“I think there needs to be a barrier broken down that prevents the staff from being able to approach the board … That doesn’t mean it needs to be a direct approach, it could be a board committee that would be representative of the teaching staff as a whole that could present those concerns to the board,” she suggested. “But I really think in order to figure out where that deficit is, we need to talk to people who are there. We need to understand what they’re facing on an everyday basis and we need to be willing to work with them.”

Porter proposed looking outside the district and learning from the successes of other school districts.

“I like to look at those that are doing better than us. We’re not just Madison, we’re Richland County. Why can’t we discuss what schools are doing different? We can share information about what’s working. We can have field trips for teachers and see what’s going on in the schools and give them ideas.”

Since the district is currently being served by an interim superintendent, candidates were asked what qualities they would look for while hiring a permanent replacement.

“I think we need to look at what they’ve done where they are,” Porter said.

While many districts hire firms to find superintendent candidates, Porter said he would want the board to be proactive while analyzing applications.

“I think as a school we need to do some of the research on our own,” he said. “We have the internet at our hands. We have Google, we have online newspapers from wherever they’re from.”

Walker listed qualities such as respectful, approachable, tactful and even-tempered.

Walker also said there would need to be "thorough vetting" and suggested creating focus groups to get the community's input on candidates.

“For me, the biggest thing is work ethic … and commitment,” Mosier said. “If someone’s bouncing around from district to district, school to school, are they truly committing to what we’re trying to instill here at Madison?”

Meet the Candidate night is a tradition in the district, according to Kim Boehm, chair of the Madison High School social studies department.

“I think it’s really important, especially for local elections, that the community members know exactly who (the candidates) are and have a better understanding of who will be representing them,” Boehm said.

Approximately 60 community members attended the event, including Randy Gough, a retired bus driver for the district.

“I’ve grown up in this district, my kids went to school here, my grandkids go to school here. And in the last few years, I don’t like the way stuff has been going,” Gough said. “This way, I can stay more informed of what’s going on. I wanted to be able to select the two best people I think that should be on the board.”

“I absolutely agree with that,” said Shelly Pavlansky, a current bus driver. “I don’t think you can make that decision without hearing what they have to say, what they believe in and what they find the most important aspects of being a board member.”