MANSFIELD -- Finances dominated the discussion during Tuesday’s meeting of the Mansfield City school board.

Interim treasurer Jill Smith gave an overview of the five-year forecast, which projected the district will continue spending more than it brings in over the next five years. 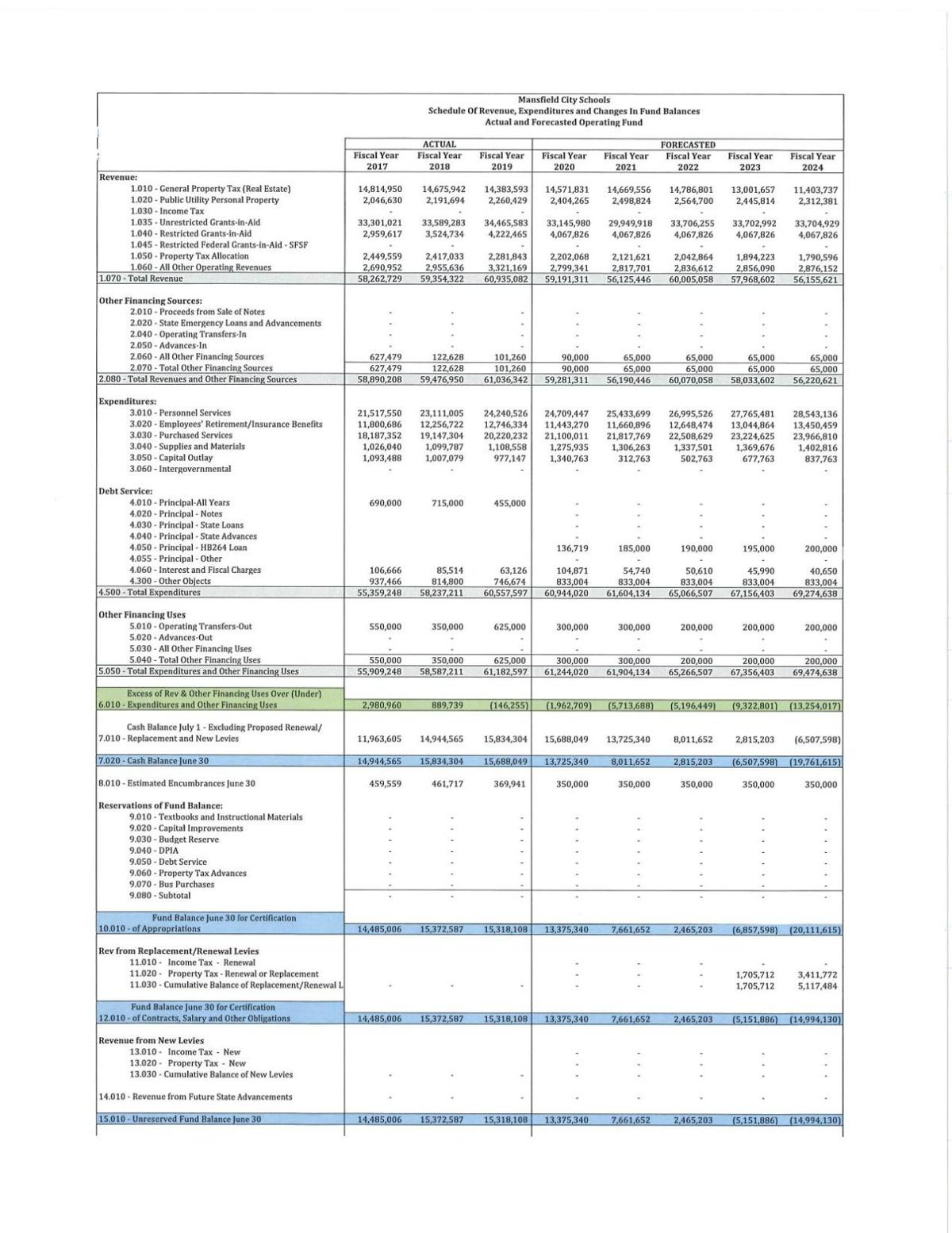 “We are dipping into any savings that we had in our general fund and we are starting to eat that up because our expenses are outweighing our revenues at this point,” Smith said.

Part of the problem, Smith said, is the recent cuts to the district’s state foundation funding.

“We wouldn’t be in as bad of shape if we didn’t have this virus and the state taking potentially 10 percent (next year). God forbid they take anymore,” she said.

Smith said school treasurers have been advised to factor in a 10-percent cut in foundation funding for the 2020-2021 school year. She also factored in a 40-percent decrease in casino revenue. Together, these cuts totalled more than $3.7 million in lost revenue next school year.

Board member Linda Golden asked if the cuts would impact the district’s career tech budget. Smith replied that it would not, since that money comes from a different state fund.

Other agenda items included a recommendation from Smith that the district refinance a series of 2013 bonds. She proposed allowing Mike Burns, a representative of Robert W. Baird & Co. who presented at last month’s board meeting, to solicit bids for the refinancing.

“Your bonds will be paid off four years in advance, with the last payment in December of 2022,” Smith said, noting that having the bonds expire at that time could make it easier to pass a levy renewal.

“This would position the district to have your debt paid off at the same time that your $4 million emergency levy will be expiring,” she added.

Smith couldn’t be sure how much refinancing would save the district until she received bids, but estimated it could be around $1 million.

Board member Chris Elswick suggested delaying the refinance so the board could find a local financial institution to handle the bidding process.

Other board members expressed concern about putting it off.

“If we don’t do it now, then we have to wait until we hire a new treasurer,” said Gary Feagin, the board’s vice president. “That could be another month or two before we even get things going. I believe timing, right now, outweighs redoing this.”

The board ultimately voted 5-0 in favor of the measure.

Also up for discussion was the creation of a COVID-19 2020 Preparedness and Response Coordinator. The board had a first reading of the job description; no vote was held.

Superintendent Stan Jefferson explained this designated point person would be in charge of the district’s COVID response across academics, athletics and extracurricular activities. The coordinator would manage the district’s compliance with any health and safety requirements imposed at the district, local, state or federal level.

“We could divvy it out within our departments, but what normally happens within organizations is something gets lost in the process," Jefferson said.

Smith applied for C.A.R.E.S. funding on behalf of the district and hopes to receive between $1.8 and $1.9 million. This money would be designated for expenses related to COVID-19, such as personal protective equipment or additional Chromebooks for distance learning. Smith said she hoped to find out by July if the district will be receiving C.A.R.E.S. funding.

The board met in executive session to conference with the board’s attorney to discuss matters which are the subject of pending or imminent court action, to consider the employment, dismissal or discipline of a public employee or official and to prepare for, conduct or review negotiations or bargaining sessions with employees. No action was taken.

-- Approved various summer facilities projects, including $134,955 for heating, ventilation and air-conditioning work for the band and choir rooms at Malabar Intermediate School.

-- Approved various personnel items, including the appointment of Shirley Jefferson as assistant principal at Malabar Intermediate.

The Mansfield City School board is expected to discuss Tuesday the creation of a new "COVID-19 preparedness and response coordinator" position.