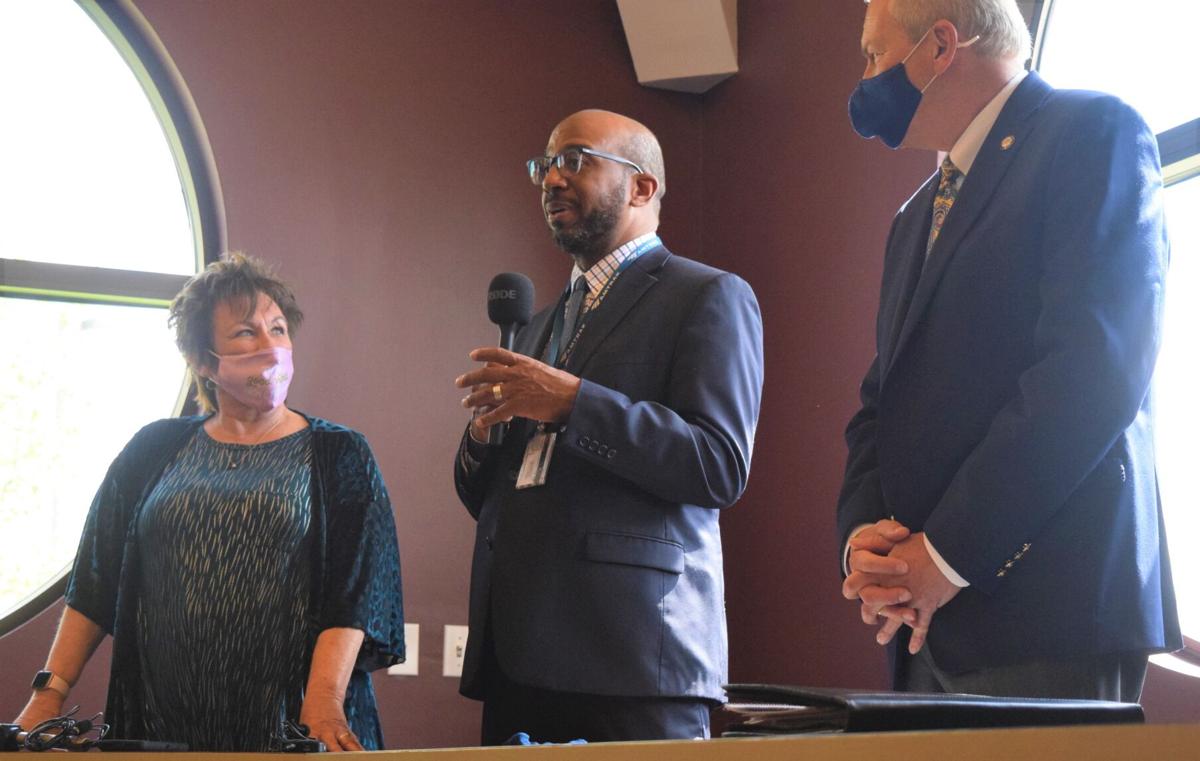 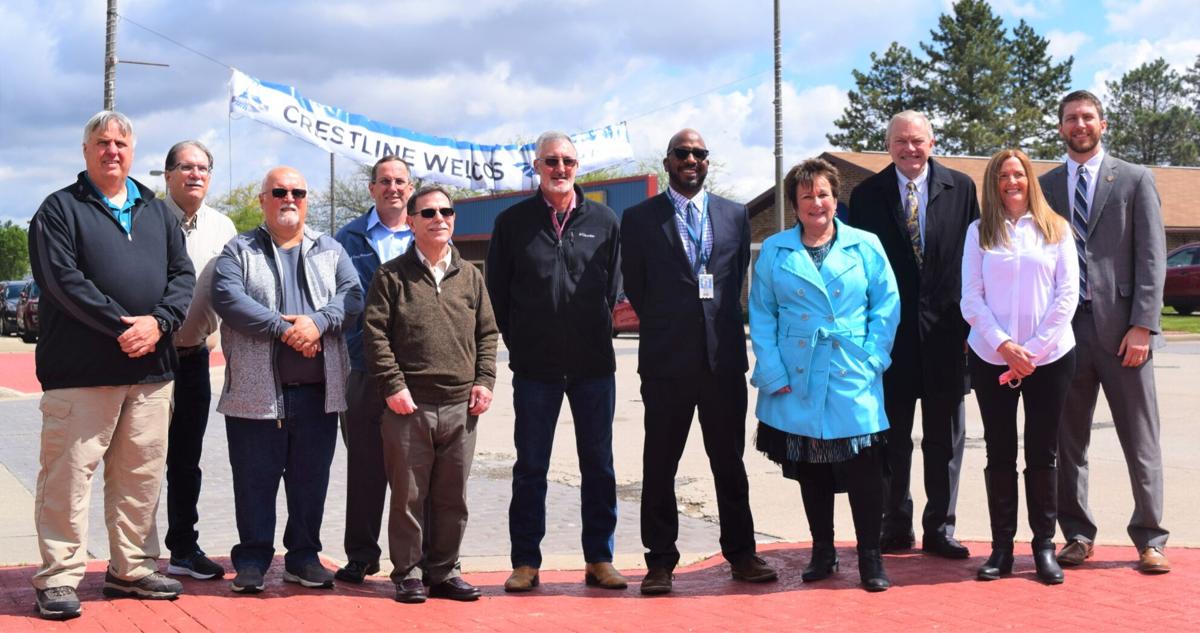 Local and state elected officials welcome Amtrak to Crestline on Friday morning with a street banner. 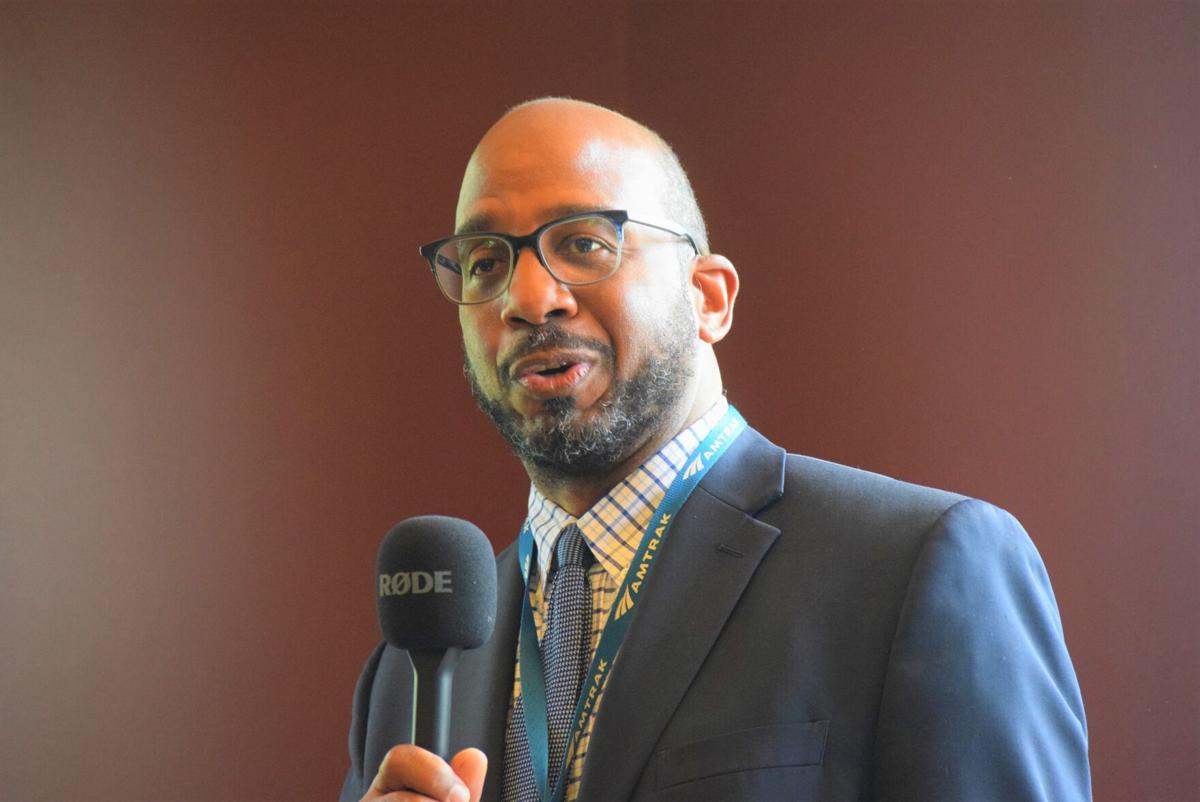 The plan, which would return passenger service to Crestline for the first time in three decades, is dependent on Congress approving the $80 billion in Amtrak funding proposed by President Biden in his $2 trillion national infrastructure plan.

The event served as a pep rally for the plan, including a request that the public help convince their representatives in Washington to support the proposal.

Derrick James, senior manager for government affairs for the 50-year-old National Railroad Passenger Corporation, aka Amtrak, broke the news during a press conference with local elected officials and others in the village hall.

"What we would like to do is expand passenger rail service. One of the routes we would like to implement is a route connecting some of the most wonderful cities in Ohio -- Cleveland, Columbus, Dayton and Crestline," James said. "Crestline is uniquely positioned in Crawford County.

"Crestline is big in our hearts, but not necessarily huge in population. It has Galion at one end and Mansfield at the other, easy access to U.S. 30."

He said if the proposal goes forward, a new Amtrak facility would be built in Crestline with one or two platforms. James said the passenger service would would cooperate with the freight haulers that use the tracks.

The proposal would have six trains coming through and stopping in Crestline each day, three northbound and thee southbound. Amtrak had a stop in Crestline for years before closing its local operation in November 1990.

He said Amtrak anticipates 386,000 annual passengers on the route.

James described the expansion proposal as a "process" and declined to speculate on when someone would be able to board a passenger train in the community of 4,448, or what ticket prices may be.

"I'm not going to answer that," he said. "There are too many unknowns right now. For us to move forward on this proposal to come to Crestline, we need Congress to give us the authority to do so."

James said Amtrak is proposing to add 30 new routes and 160 cities across its network.

"We're all been praying a lot about getting Amtrak back here," Pitt said. "We are just so blessed and fortunate that we are a selected site with the expansion."

McClain said he was happy to see the proposed investment into Crestline.

"We are so happy that Amtrak has made this decision to bring back the rich history that Crestline has to the rail," McClain said.

"We look forward to helping you any way we can in the state and we are happy to have Amtrak here," Reineke said.

James said Amtrak now has a 21,000-mile national network serving 500 stations. He said national passenger service is still viable, but added "the real growth is in corridors of 100 to 400 miles."

"That's where the passenger train can compete and be relevant against both cars and planes," he said.

Amtrak began in 1971 to provide medium and long-distance intercity service in the contiguous United States and some Canadian cities. It was founded as a quasi-public corporation, receiving a combination of state and federal subsidies.

James said Amtrak, often troubled by chronic lateness since its inception, has improved its service in recent years and that its ridership nationally has grown.

"Our system is not as rich and not as broad as we would like it to be. We have great service in some places but not very great in others," he said.