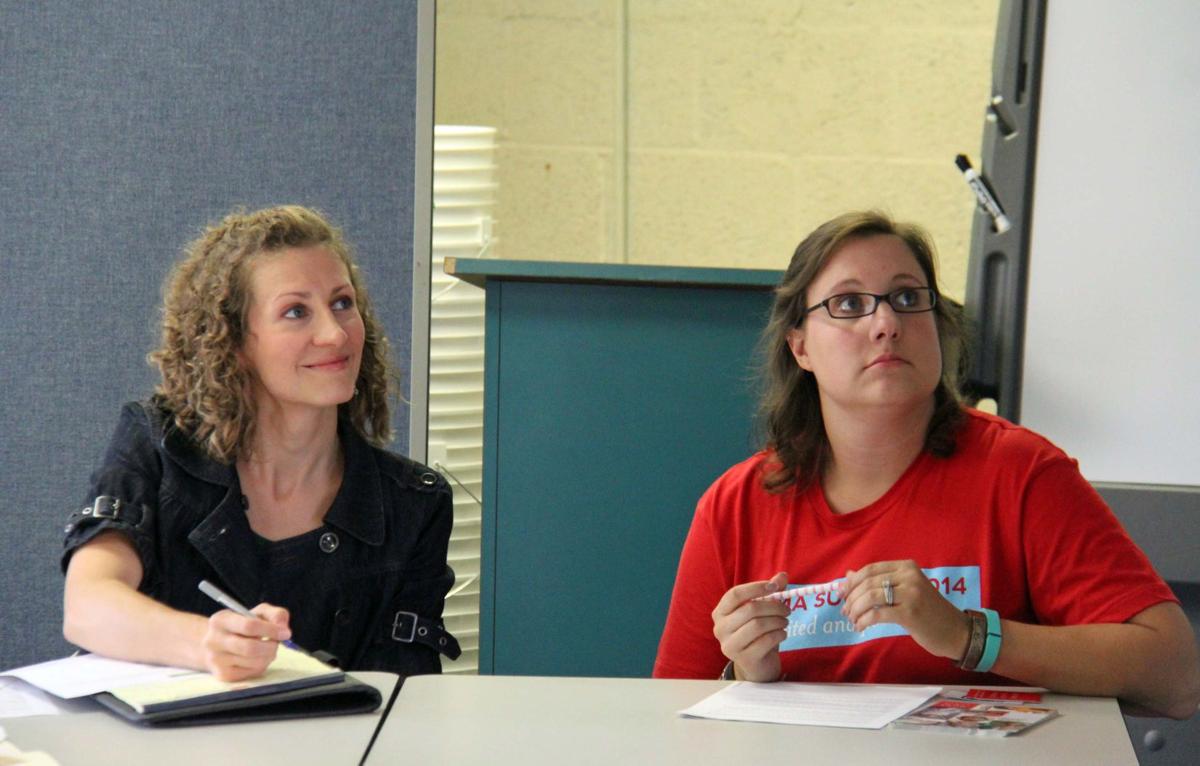 Melanie Houston, left, of the Ohio Environmental Council, and Laura Burns, right, of Moms Clean Air Force, listen as Bill Baker introduces people to an informational session Thursday evening in the community room at the North End Community Improvement Collaborative. Houston and Burns were two of the presenters at the session, which provided background on methane emission regulations. 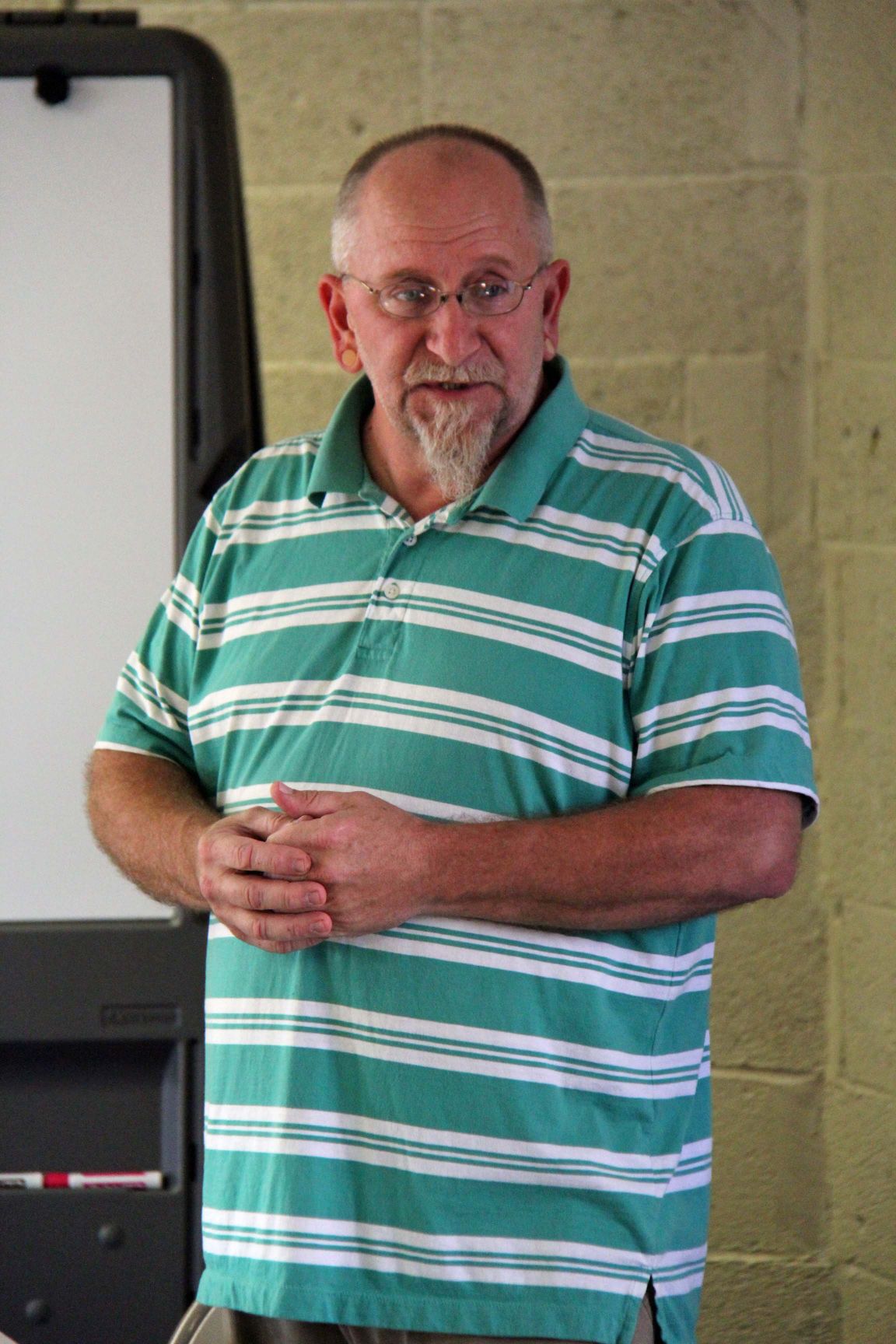 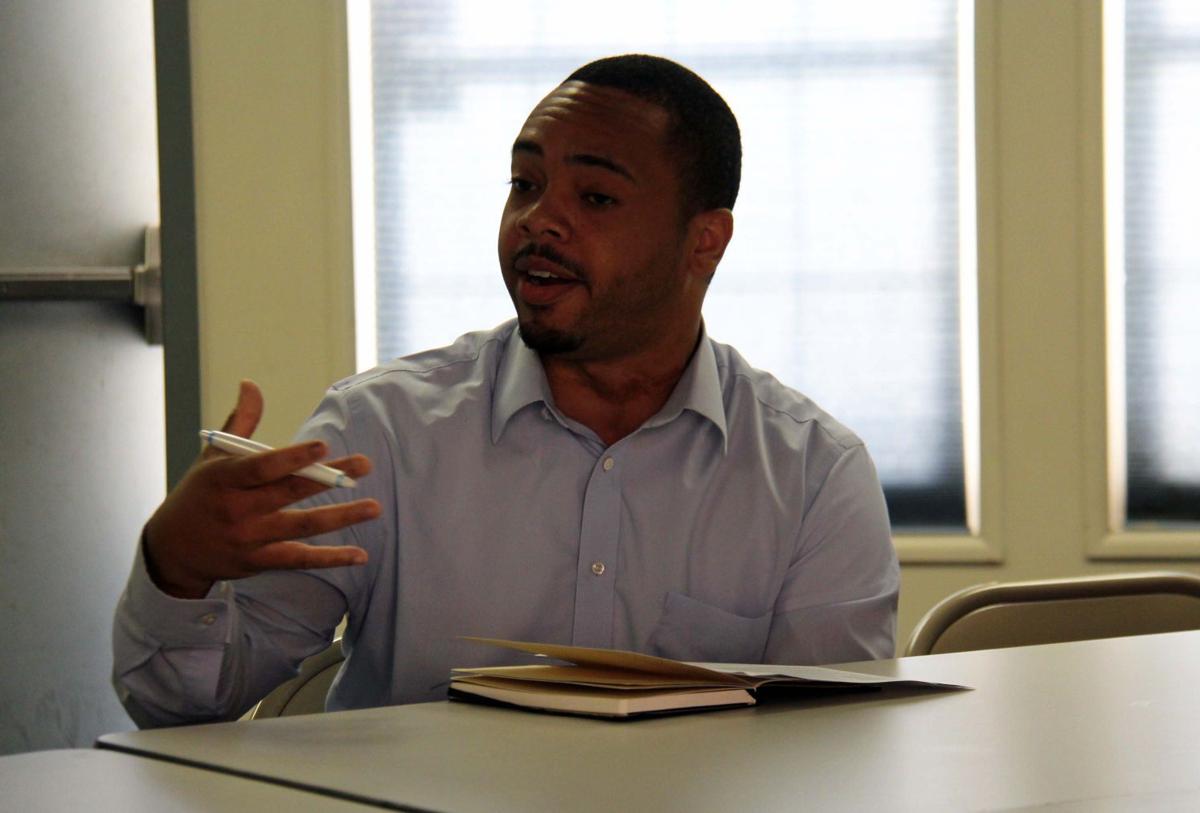 Mansfield City Councilman Donnie Bryant talks during an informational session Thursday evening at the North End Community Improvement Collaborative. Bryant was one of the four presenters at the meeting.

MANSFIELD, Ohio – The public was invited to give its input on the Environmental Protection Agency’s recent draft proposal to reduce national methane emissions during an informational session.

The event was held Thursday evening in the community room at the North End Community Improvement Collaborative.

The meeting was put together by Bill Baker, organizer for Frack Free Ohio, in collaboration with Sierra Club, the Ohio Environmental Council, and Moms Clean Air Force.

The purpose of the session was to educate locals on the new EPA draft proposal for methane regulations, which are targeted at the oil and gas industry, as well as hydraulic fracturing operations.

“Frack Free Ohio’s mission is not just to protest against fossil fuel development but also to teach people about alternatives,” Baker said. “And until we really look at how much pollution’s being created, we’re not going to really look at the alternatives and the other solutions.”

Houston said the proposal deals with new and modified sources associated with oil and gas, including fracking.

“We know a lot of the development in Ohio right now is fracking development,” she said. “We know with methane comes volatile organic compounds, which are toxic air pollutants that affect health and produce smog.”

While the proposal targets infrastructure associated with the oil and gas industry – such as pipelines, transmission lines, and compression stations – it does not apply to existing sources.

“That’s something we are looking for in the future,” said Houston, who added that the proposed regulations would require the oil and gas industry to detect leaks in its equipment and repair them.

Methane contributes to the formation of smog, which is the ground-level ozone that is harmful to human health, she said. Similarly, toxic air pollutants such as benzene, which is a carcinogen, also are released along with methane.

“We know smog contributes to asthma attacks, can trigger heart attacks and heart disease and other respiratory problems,” she said. “Heart and respiratory are really the big health problems associated with these harmful air pollutants.”

Currently, there is no fracking being done in Richland County.

Locally, Bryant said Mansfield is at an advocacy level in regards to these issues.

“What we’re looking to put into legislation is that certain rules and requirements be met with certain EPA regulations,” he said. “Right now there isn’t really much in place, just advocacy things – but we hope to put some things in place.”

At Mansfield City Council’s Sept. 15 meeting, city law director John Spon presented his Mansfield Home Value and Family Protection Act, which he authored. It is an act to protect home values in the city.

“If you’re not familiar with home rule, that gives us the authority to regulate what goes on in our city. The state has the right to override this home rule,” Bryant said. “But if we put specific language into our legislation, a local code here regarding what he’s proposing, then the state technically cannot come and override what we’re saying.”

For example, the act could protect homes against the state placing an injection-well business in town without city approval because of the impact it would have on home values.

“We should have a right to protect our home turf,” Bryant said. “It’s very important to me, and it’s important to everyone, I would think, regardless of party.”

In addition to discussing the harm of methane, presenters also pointed out the benefits of the natural gas.

According to Houston, when methane is captured it can be used to heat and power homes.

“Basically, the industry is wasting a resource that could be used,” she said.

The Environmental Defense Fund states that methane is leaking across the oil and natural gas supply chain at a rate of more than 7 million tons per year.

Because of this scale of pollution, United States President Barrack Obama’s administration this year announced plans to reduce oil and gas methane emissions 40 to 45 percent by 2025. The suite of actions is part of the administration’s larger Climate Action Plan.

The EPA proposed its draft Aug. 18.

Despite not having fracking operations in the county, Baker said people can’t always be protected from polluting industry with geographical boundaries.

“When we talk about air pollution, it knows no boundaries,” he said, “even though we live in Richland County, and we have a great city government that looks out for homeowners and for the help of our community.

“This is an issue we should be engaged in.”

Those in attendance at the session were able to write letters to the EPA and state officials on the issue, which will be delivered Sept. 29 at the EPA hearing in Pittsburgh.

Only three of such hearings will be held.

Furthermore, local residents interested in attending the hearing in Pittsburgh can be taken by bus, which will be provided by the Sierra Club for a nominal fee.

“It is America, and it is up to individuals to exercise their right to speak out,” Baker said. “Many times, we tend to see folks who complain a lot and not take action; so we wanted to provide an opportunity so that folks could engage and could understand that their voice can make a difference.”

NECIC is located at 199 N. Main St. in Mansfield. Information on the organization can be found at its website.