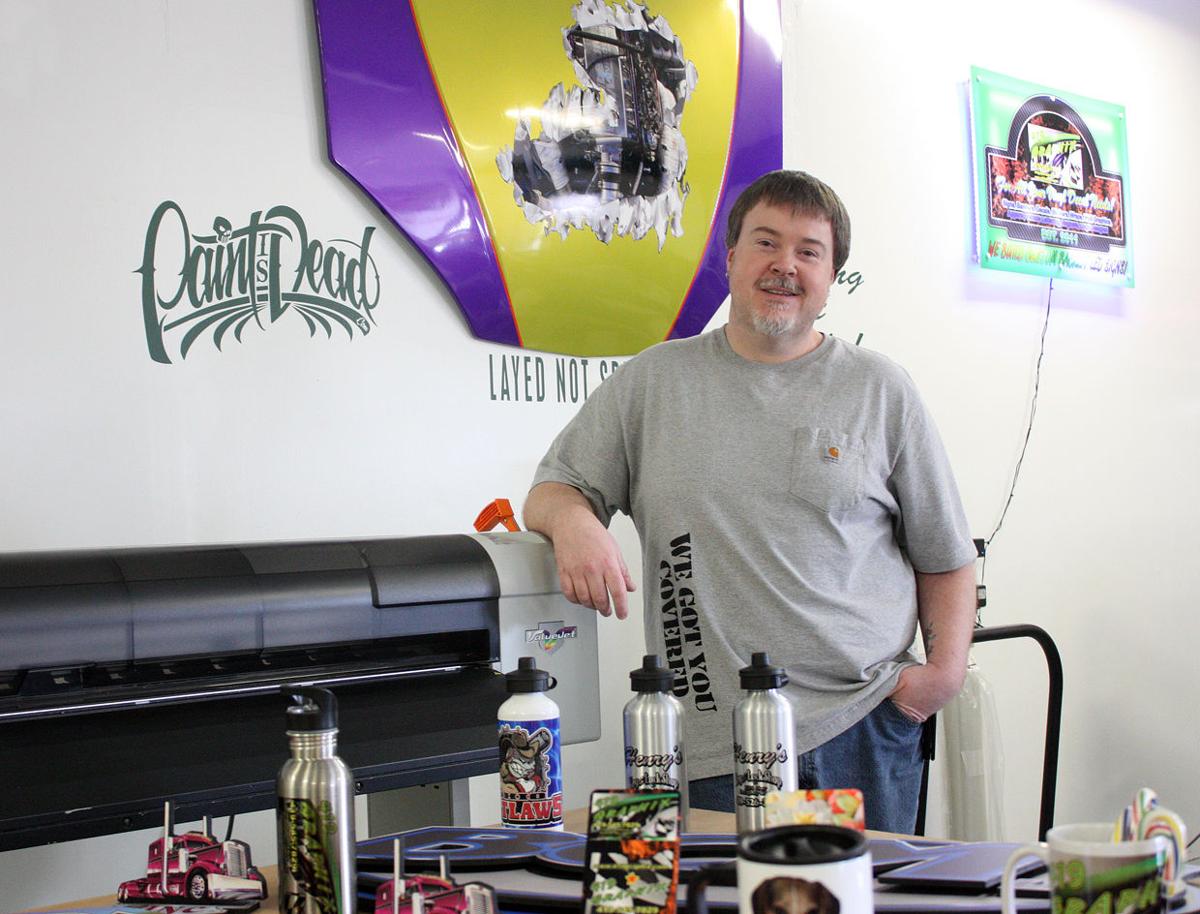 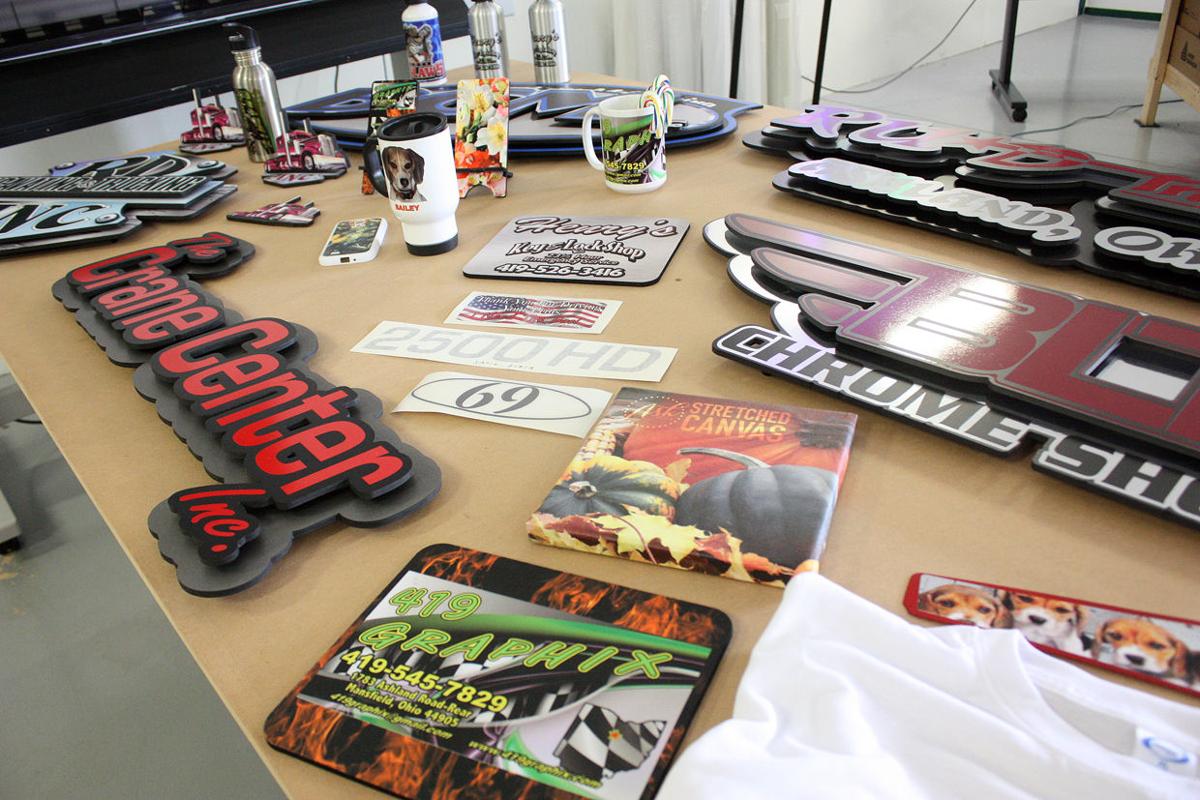 A sampling of the products offered at 419 Graphix. Many of these products were printed using a new printing method called dye sublimation.

MANSFIELD – One graphics shop in Mansfield is stepping into the future with a new way of printing backed by science.

Using heat to fuse ink onto products like shirts, coffee mugs or cell phone cases, Jason Luce at 419 Graphix is incorporating the method of “dye sublimation” into his business. While the process is not new to the printing industry, Luce believes he is the only printer in the Mansfield area offering in-house dye sublimation.

“We print the image onto heat-resistant paper as a mirror image,” Luce explained. “It comes out of the printer as gel ink, and that image gets heat pressed onto a product. The heat press actually heats the ink and turns it into a gas, and the ink is embedded onto the product so that it never comes off.”

Luce started practicing dye sublimation printing back in December after seeing an increasing customer demand. Dye sublimation can even be applied to larger products such as slate and ceramic tile surfaces.

“Dye sublimation basically bakes the image to the point that the ink turns into a gas, and the gas embeds itself into the product,” Luce said. “You’re basically dying the fibers microscopically. Instead of transferring a film, you’re actually transferring ink.”

This new way of printing comes as an alternative to traditional methods including laser engraving and silk screening. Luce explained that with silk screening, which is a vinyl transfer of an image onto apparel using heat, that print can only last between 30 and 52 washes before the image starts to fade or crack.

“Dye sublimation is growing big time in the sports industry because of athletic wear, which is very temperature sensitive,” Luce said. “Any time you are transferring a film image onto apparel, it’s inevitable that it’s going to come off. With dye sublimation, there’s no way for the ink to ever come back off.”

Even more appealing is the fact that dye sublimation is no more expensive than screen printing because it eliminates the screening process. Luce advised that customers looking for a simple print in a large quantity should still go with silk screening, but dye sublimation is better for more detailed works.

Luce got started in the dye sublimation method after needing a way to print his own multi-hued logo. It’s the next step in a business he’s owned since 2011, starting 419 Graphix after previously managing another vinyl graphic shop.

“I made the plunge, bought all the equipment and opened up in my house,” Luce said. “In 2013, I outgrew my house.”

Luce leased the building at 1783 Ashland Road in Mansfield in August 2013. The facilities work perfect for printing due to being temperature and humidity controlled. Since then, Luce has done printing jobs for a number of local companies as well as larger companies around the country, including Wells Fargo, FexEd Ground and the Ohio Department of Corrections.

419 Graphix provides printing services for signs, banners, decals, stickers, wraps, wall graphics, apparel, vehicle lettering and more. According to Luce, the company currently has more than 3,000 customers on file with a 97 percent customer-return rate, a high number for a small business.

It’s a large workload, and one Luce is currently taking on by himself.

“I need about another 12 hours in every 24-hour day,” he joked. “A lot of customers come in needing things in a hurry and I do it, but that results in a lot of late nights. My customers know there’s a rush charge but they don’t seem to mind because they know the quality of the work that we do.”

By the end of the year, Luce hopes to grow his business to be able to hire a part-time and full-time employee. He also hopes to offer small dye sublimation jobs in as little as 10 minutes. Many competing places, Luce said, do not offer one-off custom works.

“They do more mass production, and I’ll do those too, but where I get all my business from is people come to me for custom one-off stuff that nobody else will do,” Luce said. “If someone wants just one t-shirt or one travel mug, that’s not a problem.”

“When I first started out working out of my house, I had customers taking a chance on me and I still have those customers yet today,” he said. “I don’t care if they spend $10 or $10,000 I treat them both the same, because without any of those customers I wouldn’t be where I am today.”