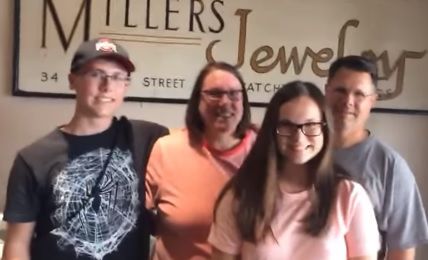 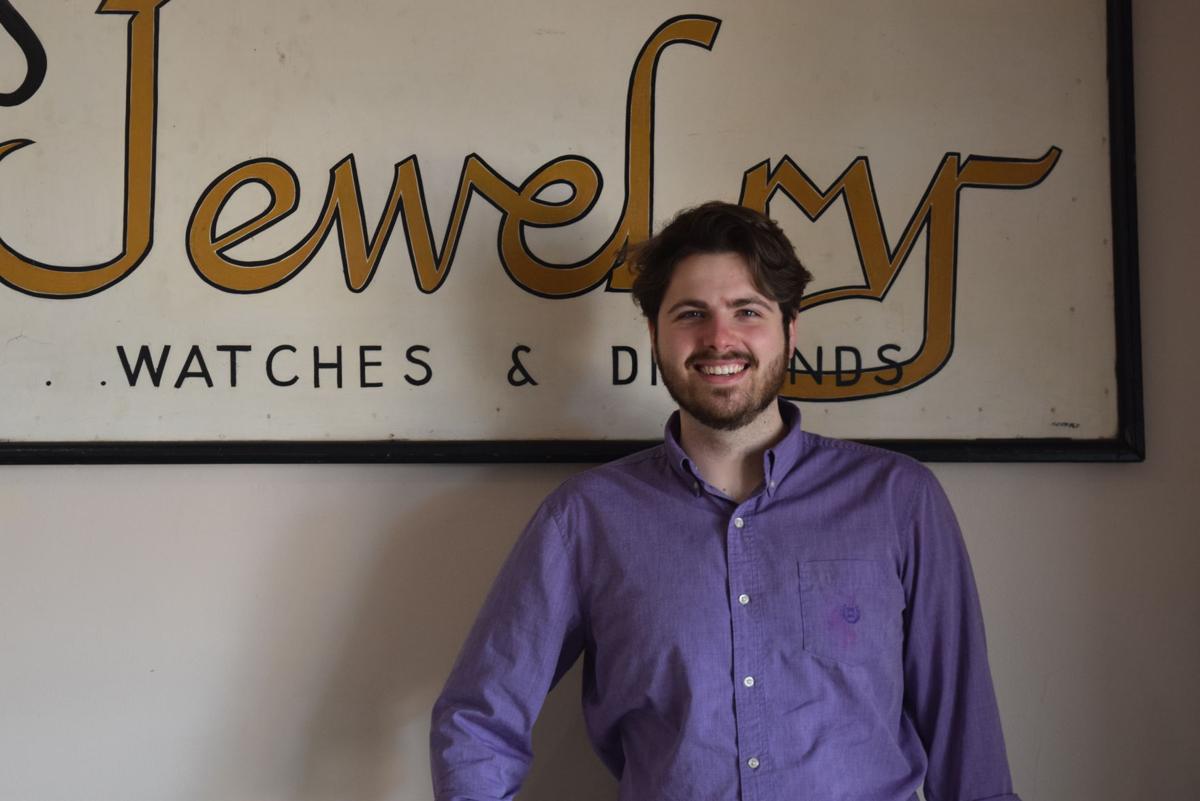 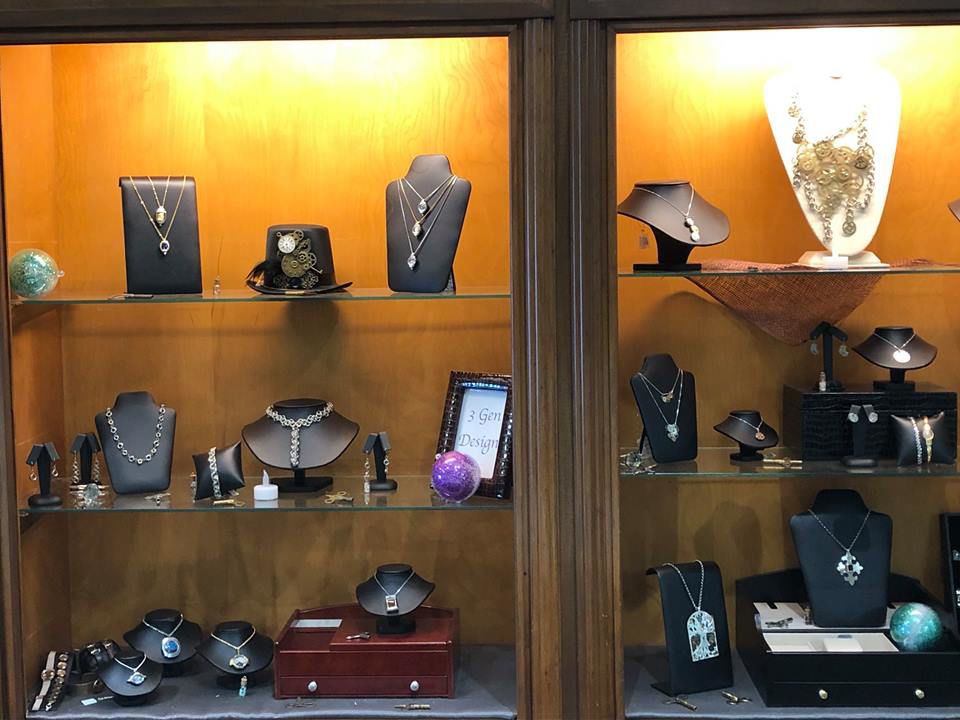 The winning family of the recent treasure hunt received a gift certificate to Miller's Diamond Jewelry in Mansfield.

MANSFIELD -- The treasure hidden by a Mansfield jewelry store has been found under a bridge at the Gorman Nature Center.

Husband and wife, Pete and Jennifer Dean and their two children Gavin and Chloe followed the clues in a poem, released Tuesday by Miller's Diamond Jewelry. The family located a deed, which they can now redeem at the 1442 Lexington Ave. store for a minimum of $680 of in-store purchases or in-house repairs.

"We started reading the clues and trying to figure out where would we go, and then we decided, 'hey, let's go out and start looking,' " Jennifer Dean said.

Her family drove across Mansfield, looking at several parks, before realizing a portion of the poem was referring to the Mansfield Y.

"We went by the old location, then we got thinking about what was near the new location," she said.

From there, they followed the second half of the poem further along Lexington Avenue to Gorman Nature Center, where they determined the deed must be at a bridge. Sure enough, that's where they found it.

"We had fun getting to do something as a family because we don't always have the same days off. And this happened to be one of them," Jennifer said.

Miller's Diamond Jewelry released the poem on Tuesday, July 2 as a way to celebrate its upcoming anniversary.

"We at Miller's thought it would pose an exciting challenge for the Mansfield community to recreate this treasure hunt, in a much more safe and contained environment, as a way of celebrating Miller's 68th anniversary, Mansfield's history, and the exciting regrowth of our downtown life," a Facebook post said.

Kyle Miller, who's the third generation of his family to work at Miller's and the son of the current owners, came up with the concept after learning about the famous Forrest Fenn treasure hunt last year.

Supposedly, a wealthy art dealer, Fenn, hid a collection of valuables somewhere in the Rocky Mountains and published directions to the elusive loot in a poem within his memoir, The Thrill of the Chase. He's said only a map, geographical knowledge and the poem are needed to find the treasure.

Still, no one has found it. Four people have died in that search, allegedly for a treasure worth $2 million.

This inspired Miller's own eight-stanza poem, which only required knowledge of Mansfield.

The Clues Behind the Poem

Miller shared the meaning behind the poem Friday afternoon. See the explanation below.

As we have hid our diamond loot

Within this field of Man

Your job is to seek out the route

And find it if you can

The above stanza explains that the treasure can be found in Mansfield.

Begin it in the pouring rain

A journey’s start and end

The setting sun will help you gain

A central way to wend

Miller had intended for the treasure hunt to begin at the Ohio State Reformatory. The first two lines are meant to relate to Mansfield's favorite movie, The Shawshank Redemption. And the second two lines instruct adventurers to look towards downtown Mansfield, or more specifically Main Street.

Past larger jewels than you can take

Go you by this famous shape

The first line above, Miller said, could relate to Main Street's proximity to Diamond Street or simply to all the "jewels" popping up around downtown Mansfield as part of its ongoing revitalization.

The shape mentioned is the city square, and the last line references Prince Phillip's son, Edward, implying that people should pass an Edward Street while traveling on Main Street towards the next clue.

From here you veer around the bend

A symbol of inclining tends

Means you are on the path

This clue tells readers to veer onto Lexington Avenue instead of continuing on South Main Street. If continuing on Main Street, people would come to the Mansfield Cemetery, which is why Miller included the line, "Stay clear of reapers wrath."

The "inclining tends" was a reference to the Leaning Tower of Pizza.

Have newly become one

Just stay the lane and you’ll be rich

The first line above relates to the YMCA, which is now more commonly called the "Y."

Distractions will be plenty now

Until you reach the hill

Downward toward a thousand boughs

The distractions mentioned above are the dozens of businesses and restaurants that might tempt people to stop and leave the trail leading to the treasure.

And as for "a thousand boughs," Miller said, this related to all the trees at the Gorman Nature Center.

Pass through a clump of pine

You’ve finally found our mine

The stanza above relates to where the deed was specifically hidden. The third line led the Deans to find it at a bridge.

So bring the deed as you have won

Bear ye treasure of a king

This last stanza simply means to bring the deed to Miller's Diamond Jewelry to redeem the prize.

Because this treasure hunt ended quicker than Miller anticipated, he plans to hold a few smaller versions again this summer.

"It ended sooner than I hoped, but I would call it a success," Miller said. "Several people did go out and look for it, and someone found it. It was a young family, and they hadn't been at the store before."

"We've had people reaching out, and people giving suggestions for next time and lots of interest," Miller said.

He plans to use that feedback to develop even "trickier" hunts this year and next.

MANSFIELD -- The United Way of Richland County is expecting to reac…