You’ll never forget the first time you camp in minus 14 F. That’s why Mt. Marcy, in the high peaks region of the Adirondacks in upstate New York, will always be my prom night. 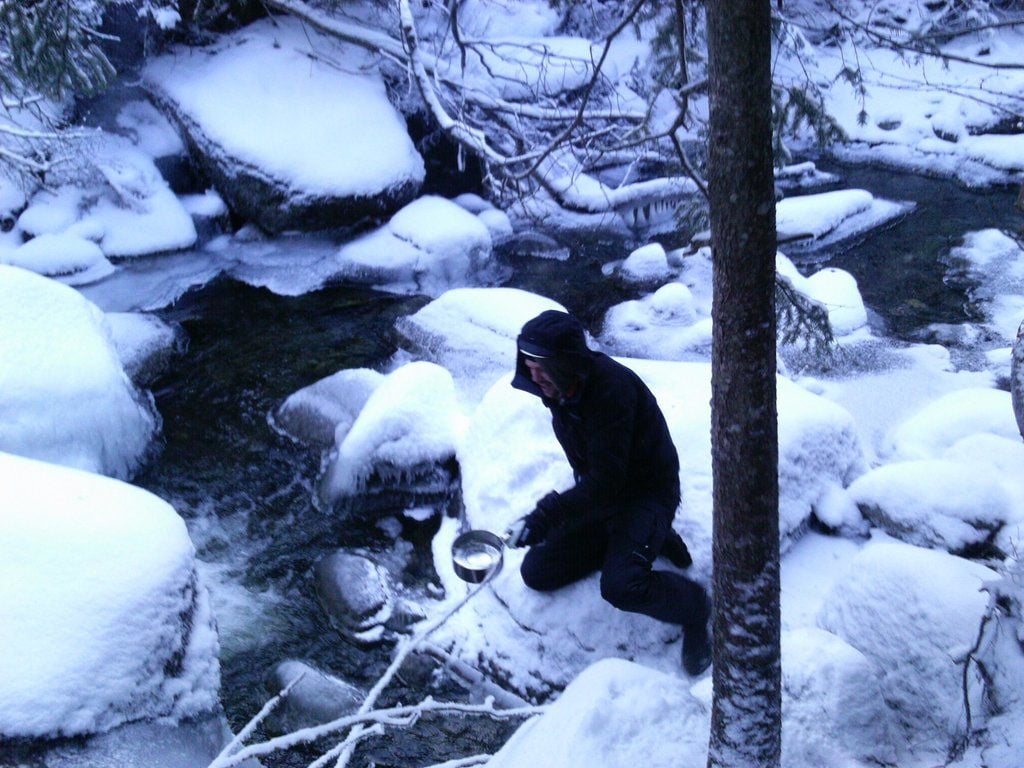 Adam Fox is shown here at Phelps Brook before his glove gets soaked. 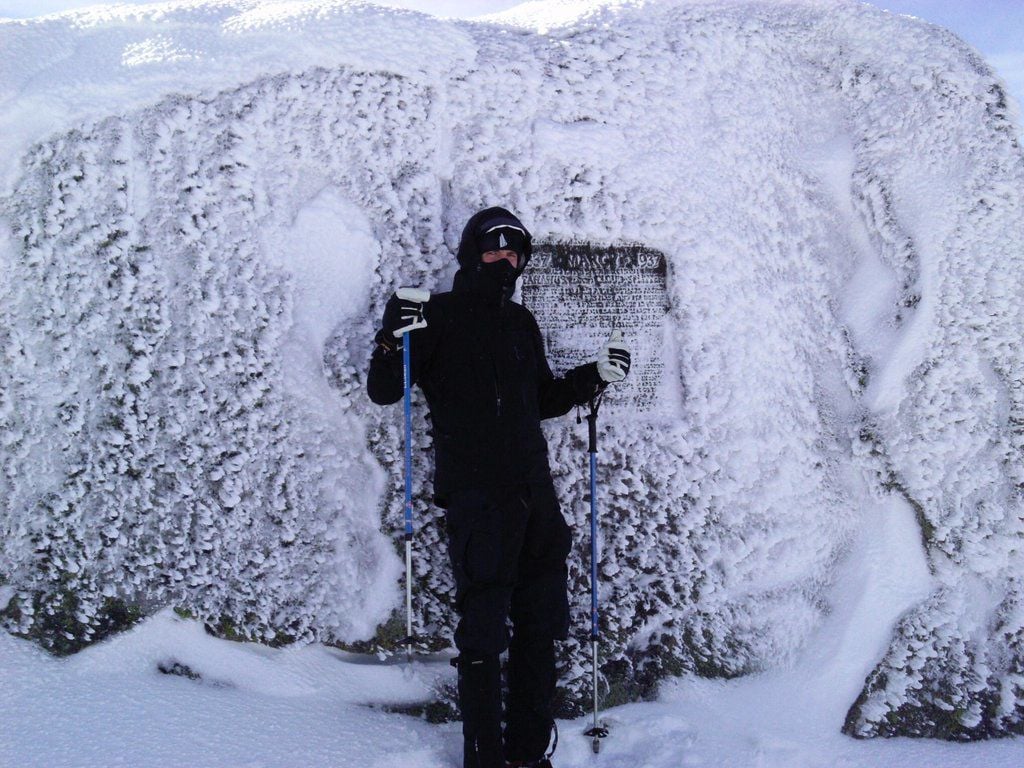 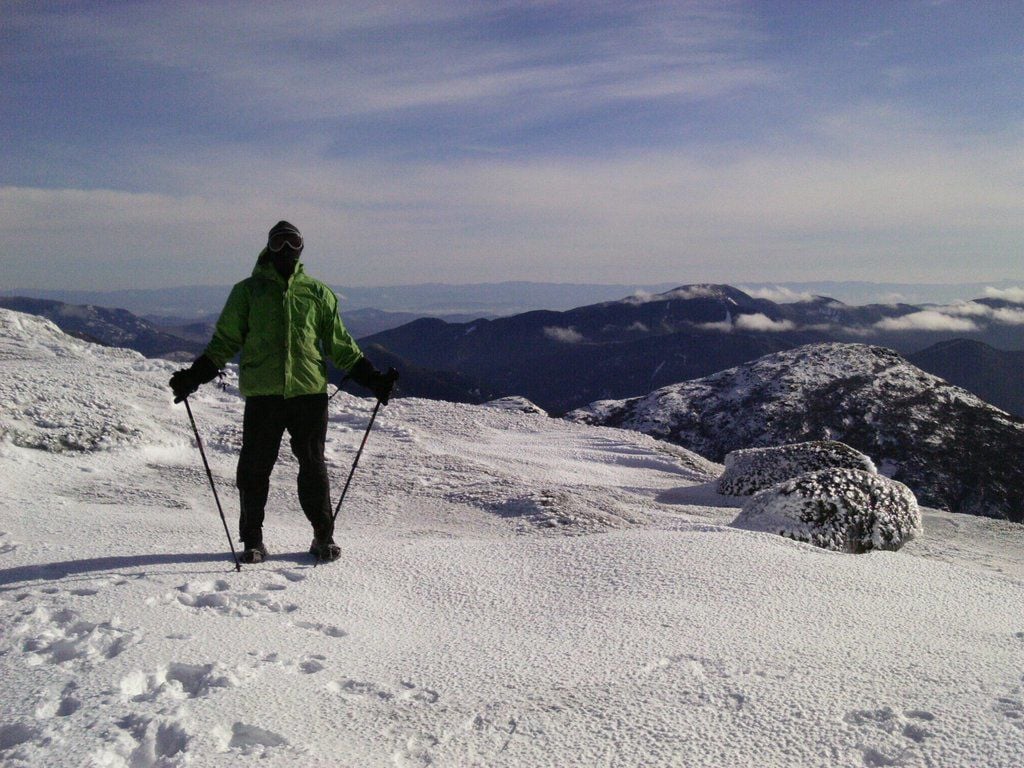 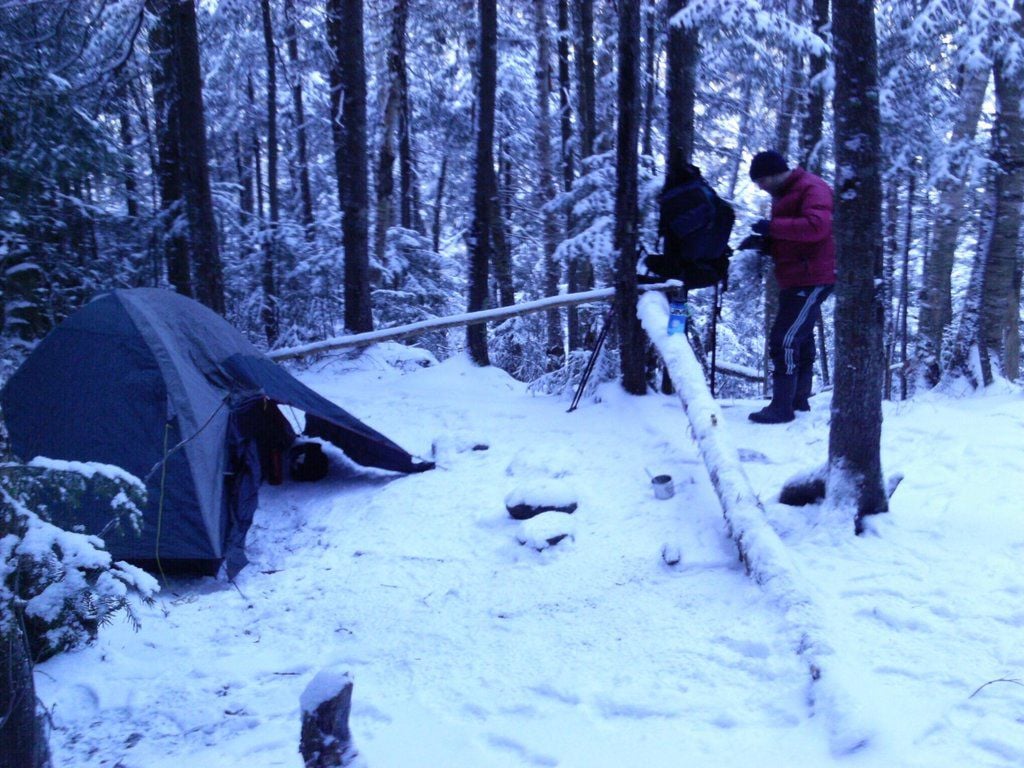 Columbus Dusty is shown here at base camp. 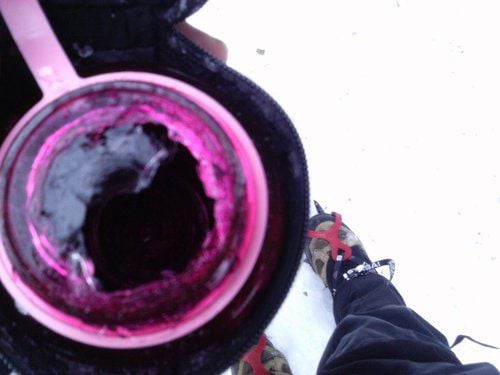 It was so cold water froze even in an insulator pouch. 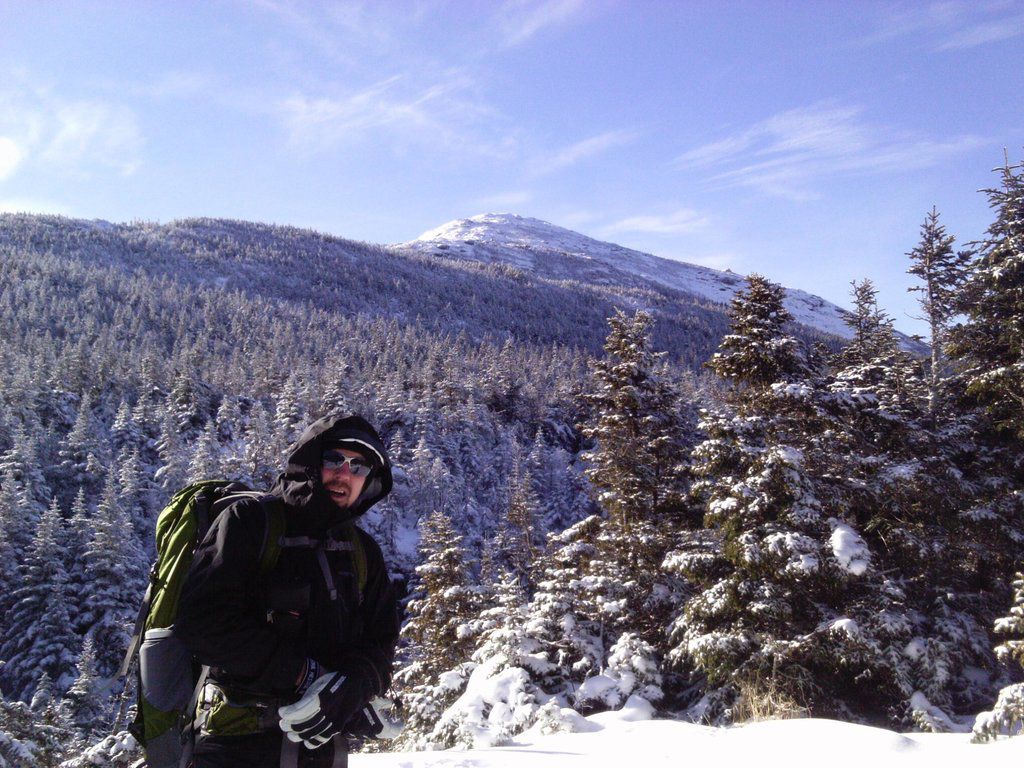 Adam Fox takes a look at the view from Mount Marcy in New York.

Adam Fox is shown here at Phelps Brook before his glove gets soaked.

Columbus Dusty is shown here at base camp.

It was so cold water froze even in an insulator pouch.

Adam Fox takes a look at the view from Mount Marcy in New York.

A hike up any mountain can vary. You can drive to the top of Mt. Washington in New Hampshire in the summer. But in winter, the peak has recorded some of the strongest wind gusts on Earth. Even if there’s an easy Class 1 hike to the summit, chances are there’s an insane Class 5 route on the backside or north face of the mountain you can do.

With that in mind, I wanted to summit the highest point of every state, east of the Mississippi, in winter conditions. Marcy was to be my first winter expedition that I planned without the help of other climbers or through mountaineering classes.

Somehow, I convinced my cousin, Columbus Dusty, to join me in the freezer. To this day, he shakes his head and frowns at me every time I bring up the climb.

From Ashland, it was about a 10-hour drive along “the green mile,” or I-90, a toll road colored green on the atlas that goes past the wine fields of Lake Erie, the burnt trash-lined avenues of Buffalo, Rochester, Syracuse and river-laced Albany, respectively.

The biggest thing I learned from that drive was to never take the “scenic” route through the mountains if there’s any chance for winter weather. Columbus Dusty advocated for staying on the Interstate as long as possible, but the Adirondack region was 9,375 square miles and I had to see as much of it as possible.

Nothing like driving for eight hours and running into a blizzard -- the darkness of the whiteout -- when semis are pulled over, you know it’s a good time to stop.

Around 3 a.m., we arrived at a typical murder motel, and nested up in an old smoking room. The sides of the mattresses stained with bodily fluids and the residue of combusted tobacco was still so thick you could scrape the walls with your fingernails and roll a smoke.

Before bed, all the gear was laid out and gone over — not a lot of room for error when the forecast was calling for anywhere from minus 10F to minus 20F. It was hard trying to fall asleep as so much doubt and insecurity squeezed the esophagus, acid reflex feeding on fear.

It was a short drive to the trailhead from Lake Placid, home of the ’80 Winter Olympics. Decades earlier, my father was there, camping, and bought an Everest-rated Eddie Bauer sleeping bag. It was now in my pack as we headed into pine forest abyss.

When it’s 40 degrees below freezing, it’s dryer than a desert. The sound of every step was like breaking plastic, as even snow can freeze. At 10 a.m., we were in no hurry, as our goal was to make it no more than three miles up the VanHoevenberg Trail to set up basecamp. Our packs pushed 60 pounds as a lack of experience had us prepared for everything.

Adrenaline madness made our pace too quick, overshot our planned camp spot and found ourselves at the Phelps Brook river crossing, 3.5 miles in. The trail itself was pretty packed out, so we didn’t need snowshoes. The snowfall there can be so suddenly severe, it is illegal for you to venture into the backcountry without snowshoes.

Anyone who has ever tried to “bareboot” walk in waist-deep powder knows that covering any distance is impossible. Pulling one leg out after postholing, just as the other sinks in, over and over again. Then you start to sweat. And then, as the rule goes, if you sweat in the open, you die.

It was difficult to find a flat camp spot around Phelps Brook, as the sides of mountains tend to be slanted. After some bushwhacking, Columbus Dusty found a place that had been flattened by a boulder or perhaps the area was the remains of a massive uprooted spruce.

There was no talking when we set up the tent, as our vulnerability was clearly felt. No matter the storm, we could always crawl into the tent and survive. Or course, it would have been nice if we had a four-season mountaineering tent, but the structure was sound.

While backpacking around Europe with two ballerinas in the early 2000s, I bought the tent in Munich, Germany, with plans of camping in the Swiss Alps. So it was somewhat battle tested.

Around 2 p.m., our camp was secured. But now what? Every time you stopped moving, the cold came. There was a lot of pacing. Trying to tell stories, attempting to appreciate the surroundings as it was all thick forest, snow-drenched tree limbs, looking at my watch and wondering if it would freeze.

We could have built a fire, but the thought of gathering wet wood and getting it going seemed like too much of an undertaking. Simply standing, the body was burning hundreds of calories to combat the chill.

By the river, we got out the camp stove and fired up the blue flame. Just the visualization was enough to feel warmer for a second. The water took forever to boil. I didn’t have a thin glove under my thick winter ones, so when I needed to grab something small or hold the plastic fork, there was about 5 seconds before I had to violently shove my hand back inside.

The rice and beans were hot and I didn’t wait for them to cool, burning the back of my throat. The warm food energized us again as the sun began its descent.

Luckily, the river was flowing fast enough that we didn’t have to break through the ice every time to refill our bottles. But on the last trip, as I went to scoop up the water, I forgot my gloves were still attached via string to my wrists (so they can’t fall off mid-climb) and my right glove filled with water.

Instantly, I flipped it over to drain, but it was too late. In a half an hour the entire inside would be ice. Having an extra set of gloves allowed me to continue on the expedition as my cousin laughed and laughed at my stupidity.

At dusk, even though it wasn’t 6 p.m. yet, we had no choice but to retire to the tent. The snow served as good insulation and with all our layers on and body heat, we felt comfortable, but stir crazy.

Sitting up, the upper body was out of the bag and would get chilly, so it was a horizontal prison. We both were night owls, so sleep that early was impossible.

It’s always a good idea to hydrate the night before, but not good to fill your bladder.

Not sure when we fell asleep, but around 2 a.m., my bladder was screaming for relief, and I was covered in sweat. Too many layers, not trusting my sleeping bag.

I sat up, ripped off my LL Bean parka, sweatshirt, undershirt and long johns. My headlamp illuminated the steam coming off my belly and I sat shaking, shivering, muscles contracting into instant cramps. I lost the will to put on a shirt, and dove back into my bag. How was I going to pee?

My movement caused it to snow inside the tent. As your body heat fills the inside, it freezes to the top, creating a frost layer. Moving shakes the flakes free, and it turns into a snow globe. Which melts on the top of your bag and then freezes, giving you a layer of ice on the top of your sleeping bag.

Another hour passed. Couldn’t take it anymore and got out of the bag and opened the tent to pee. A giant Yeti was there with a high-powered commercial fan blowing arctic winds into the tent.

It was just too brutal to go out, and again I Gollum-slithered into my bag, hoping irreversible kidney damage wasn’t being done.

The watch beeping at 5 a.m. was relief, defined. My upper body had become catatonic, and trying to slide my arm through the long-sleeved shirt was snail-like.

Finally, outside, at dawn, I was able to sigh. I always camp with a pee bottle to this day. We had plans for a hot oatmeal breakfast, but had lost the will to do anything other than to start hiking.

The trail was easy to follow and there were plenty of blazes to reassure. My crampons perhaps gripped the ground too well, and I wished I had gone with micro spikes like my cousin did.

At Indian Falls, there was a creek to cross, but it was an ice rink, and it was hard to tell the thickness from the gleaming sheen.

“Umm, you should, like, go first, ‘cus like, you’re the best at it,” I said to Columbus Dusty.

“Cowards don’t belong on mountains,” Columbus Dusty said and charged across the creek.

Later he would confess that the second person is more likely to fall through as the ice becomes more compromised. Can't pick your family, as they say (love you, cuz!).

Seven miles in, we were above the tree line and had a gorgeous view of Mt. Marcy. Cloudless sky and little wisps of white, tailing off the top.

There were no tacks. We would be the first to summit that day. Full facemasks and goggles from here on in. Neoprene is required, because as you exhale, your breath will freeze to the side of your face, so wetsuit material prevents frostbite.

On the summit, we forgot about the temperature, the trials, the errors; it was just us and the endless horizon. The High Peaks region all to ourselves, claimed for a moment, which is all the time you can ever ask for up there.

My ego got us turned around coming down. I was sure it was left after crossing this one creek, and after a big circle, Columbus Dusty sat down and refused to move. All the basecamp pack weight and fatigue was magnified, and it was the most defeated I’ve ever been climbing.

We didn’t speak the final two miles of the climb. The 15 heatless miles roundtrip melted our sanity, and we reverted back to that of the Neanderthal, unable to make simple decisions and basic calculations.

It got worse in the car, trying to find a cheap motel at dusk, to no avail.

We both broke at the same time, in the liquor store parking lot, after procuring some local wine. A fight to the death was agreed upon, but we barely had the energy to open the car door so we kept driving. The very next motel welcomed us in for $45 for the night, and after a hot shower and glass of red wine, humanity replaced the savage calls that had been beckoning our minds.

But just in case, I slept with a knife under my pillow.