ASHLAND - There seems to be a disconnect between the people whose lives are impacted by addiction and those responding to the opioid epidemic. 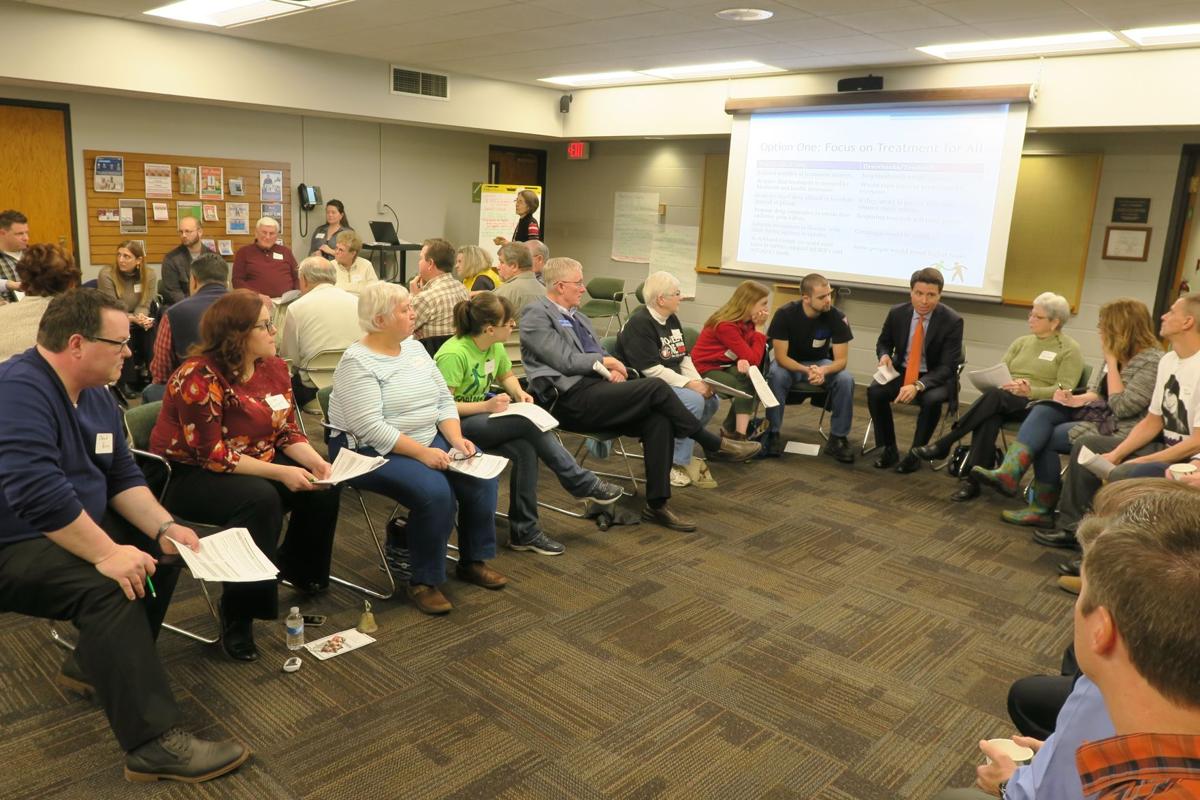 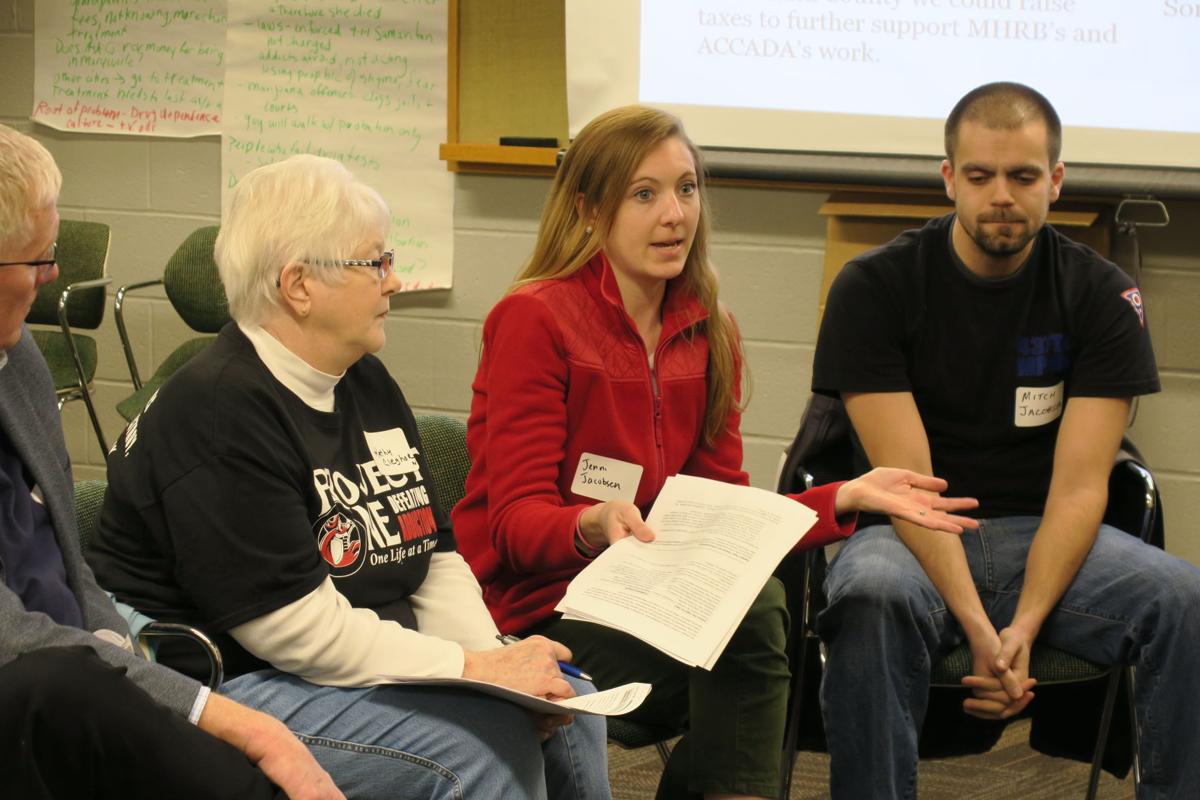 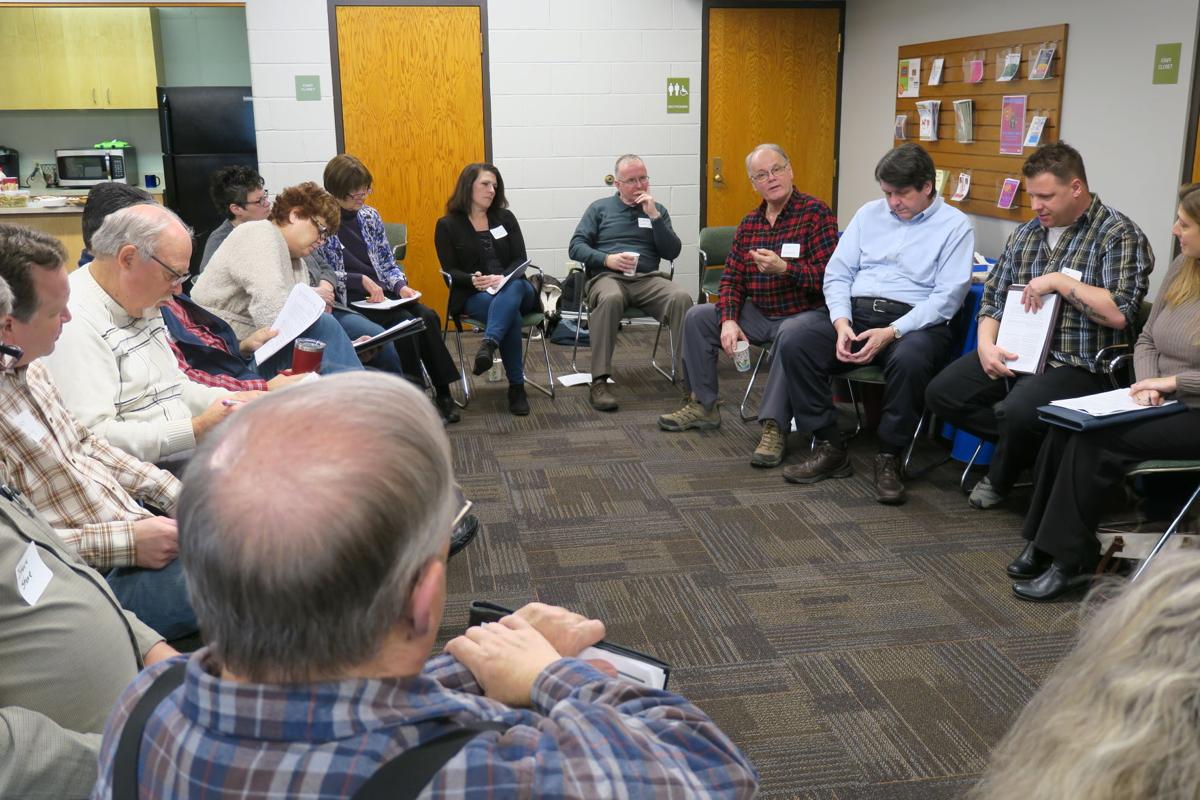 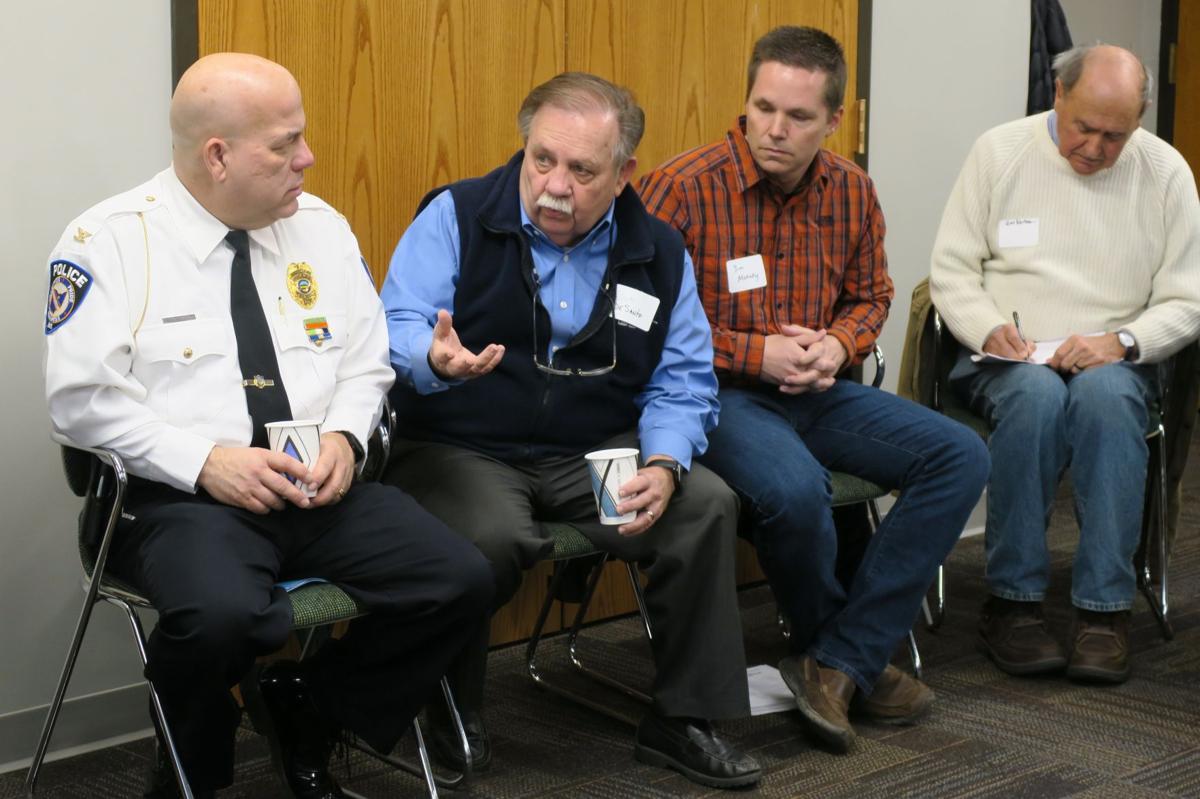 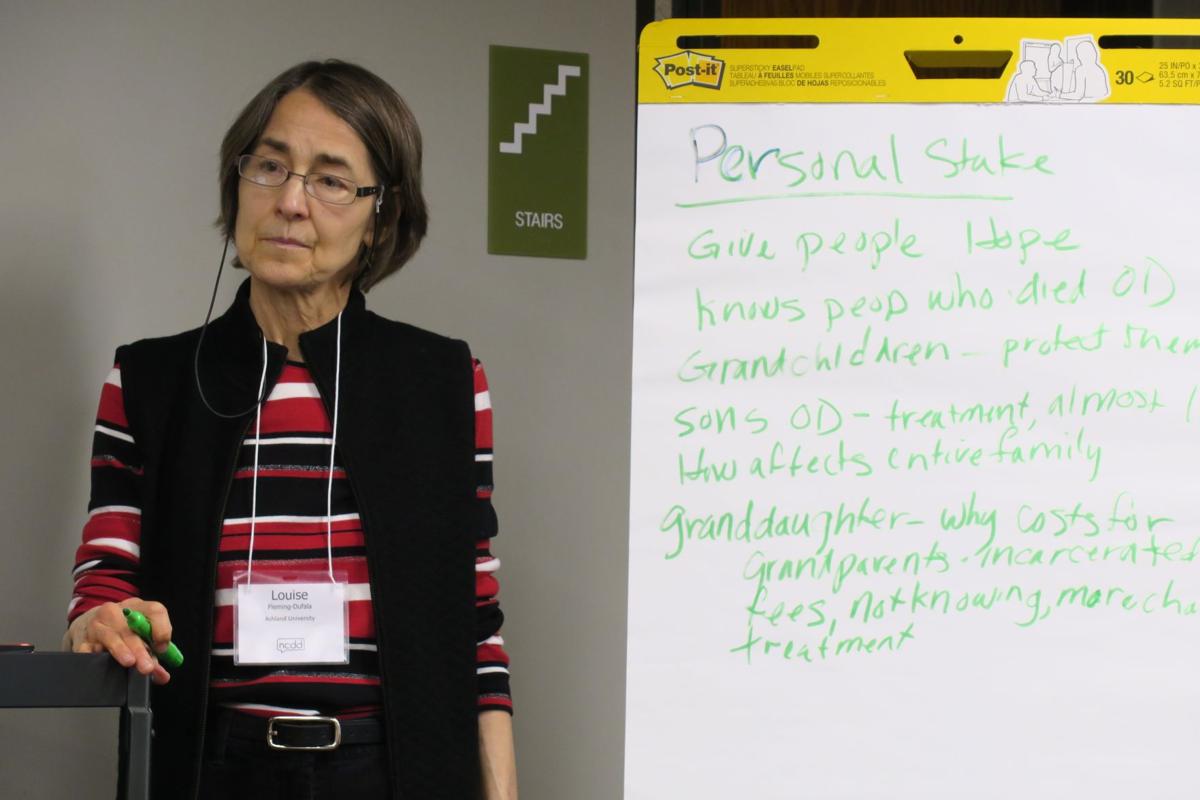 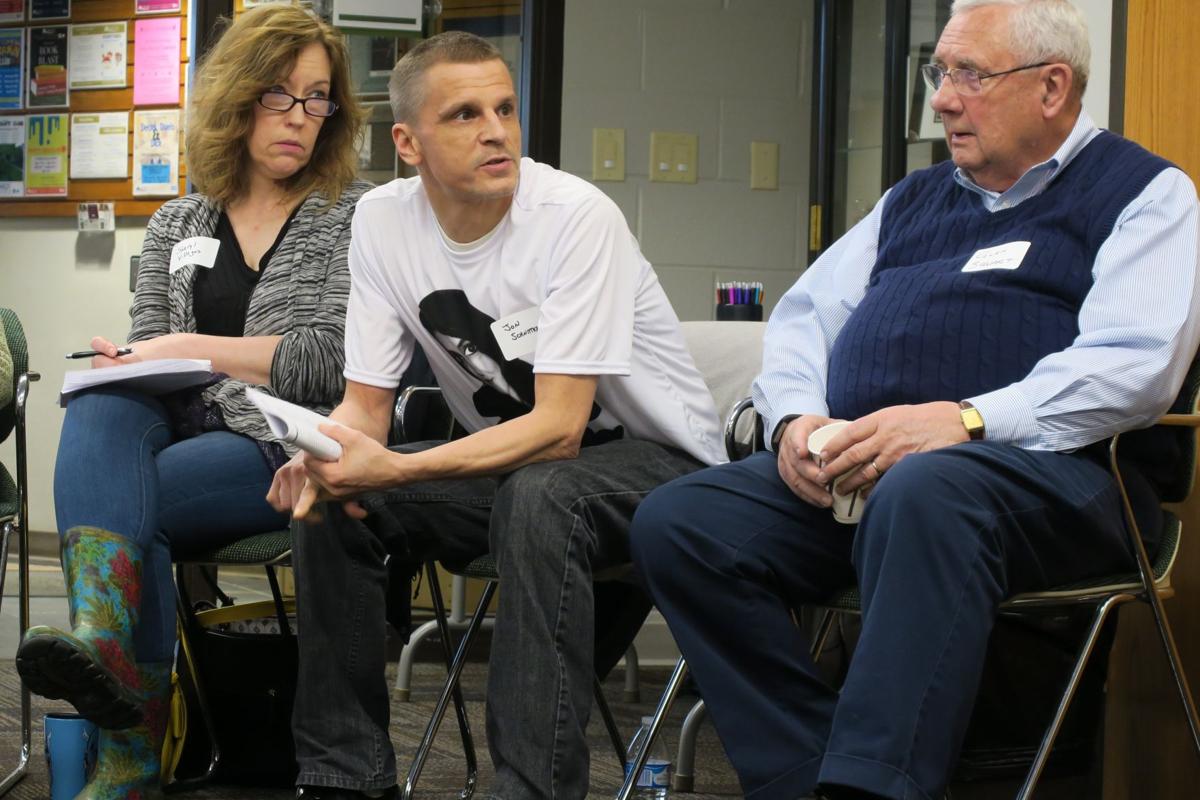 Jon Schnittke, whose daughter died of a drug overdose last October, speaks at a Center for Civic Life forum in February. 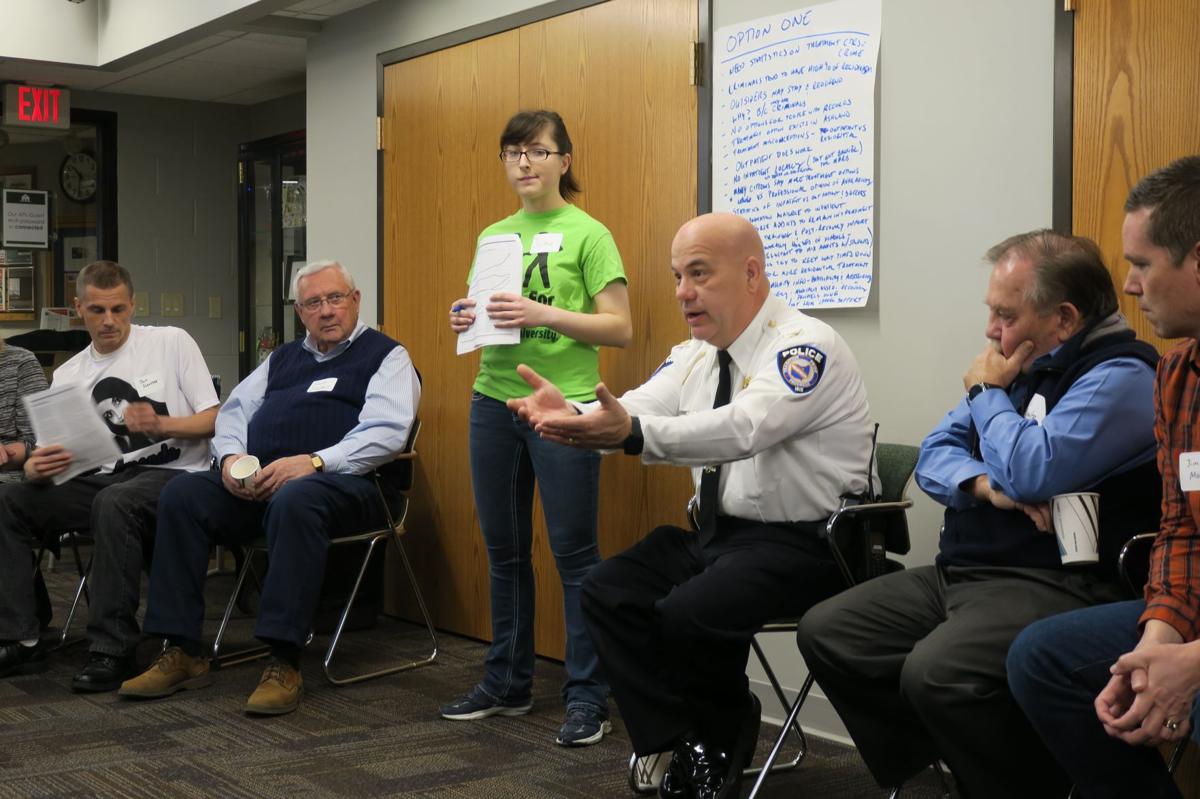 About three dozen people came together at Ashland Public Library Saturday to discuss possible responses to the opioid epidemic. The discussion was hosted by the Center for Civic Life at Ashland University in partnership with Mental Health and Recovery Board of Ashland County and Ashland County Council on Alcoholism and Drug Abuse.

Jon Schnittke, whose daughter died of a drug overdose last October, speaks at a Center for Civic Life forum in February.

People come to the issue from their own perspectives, often unable to see or fully understand the perspective of people with different relationships to the issue. That lack of understanding can prevent the community from moving forward.

That was the consensus among participants in a community forum Saturday at Ashland Public Library. About three dozen members of the Ashland community come together for the event to share their views on the crisis and to seek solutions.

The forum was facilitated by the Center for Civic Life at Ashland University, in collaboration with Mental Health and Recovery Board of Ashland County and Ashland County Council on Alcoholism and Drug Abuse.

Among the forum participants were parents and grandparents of individuals struggling with addiction, people fearful of drug users and dealers in their neighborhoods, physical and mental health-care providers, social service agency representatives and current and former elected officials.

Jon Schnittke's daughter died of a drug overdose last October. The immense pain he feels is heightened by knowing that his daughter's death may have been prevented if the person she was with when she overdosed had not been afraid to take her to the hospital.

Based on his own experience, Schnittke called for more leniency for low-level drug offenders and for reducing the stigma associated with addiction.

"These people are human beings, and we're letting them die, basically because of a stigma," he said.

Retired Ashland County prosecutor Bob DeSanto disagreed, saying if opioid use had more of a stigma like cigarette use has come to have, that cultural change would reduce the number of drug users. He also said users should face significant punishments for low-level offenses so they can "learn their lesson" and not become repeat offenders.

Others in the group countered that without proper treatment, jail or prison time could do more harm than good.

Police chief Dave Marcelli said sometimes people have the perception that all drug dealers are criminals who should be prosecuted and all drug users are victims who should be helped. That may be oversimplifying, he said, because many people commit crimes or traffic in drugs to support their own addictions.

Kathy Robison, a mother who has had two sons addicted to drugs, said she feels many people don't understand her experience, particularly the helplessness and grief she feels when she doesn't know if the next call she gets will be to tell her that her son is in jail, in the hospital or the morgue.

Robison wants to see a support group started for families of people with addictions, and she would like to see more high-quality treatment options offered within Ashland County.

David Ross of the Mental Health and Recovery Board argued many services are available in the community. In fact, he said service providers feel the services are adequate, but he admitted people may not be aware of the help available.

One commonality that emerged during the deliberations was that while people disagree on how law enforcement should treat drug offenses, most people agreed that education and prevention efforts are important and should be bolstered.

As an example of an approach that could be expanded, local physician Jim Mooney cited Ashland High School principal Mike Riley's work in implementing a mentorship program to develop resiliency in children with adverse childhood experiences. Forum participants expressed interest in hearing more about Riley's approach in a future session.

Forum participants were unable to reach a consensus about specific ways the community should respond to the epidemic, but agreed the dialogue was a healthy first step.

"I think doing this today made people think about things from a different perspective that they hadn't thought about before," Robison said.

Schnittke said while he didn't agree with everything that was said, he appreciated the opportunity for open dialogue and he learned new things about laws already in place and services already available that could benefit others.

Sharing information, he said, could save lives.

Mayor Matt Miller said he appreciated that the forum included both professionals who provide services to people with addictions as well as people directly impacted by family members' struggles with addiction.

Going forward, forum participants asked for more discussions on specific issues related to the drug crisis so that everyone can gain a better understanding and determine how to move forward.

"I want to see a common language developed so that we can talk about it from the perspective of law enforcement, schools, emotional health and people that are suffering," Mooney said.

Forum moderator Louise Fleming Dufala said the forum had the impact she desired and will be used as a starting point for further conversation.

"I'm speechless. It's exactly what I wanted," she said. "People came with, in some cases, very different ideas, and yet we agreed on some things and we're going to have some follow-up. I am not going to let this go."

Ashland High School principal Mike Riley has been working hard to identify students who have experienced trauma and help them develop resilience and discover a sense of hope for the future. Riley has started this effort with at-risk students at the high school, and the district's administrative team is discussing how to expand the effort to reach more students at a younger age.