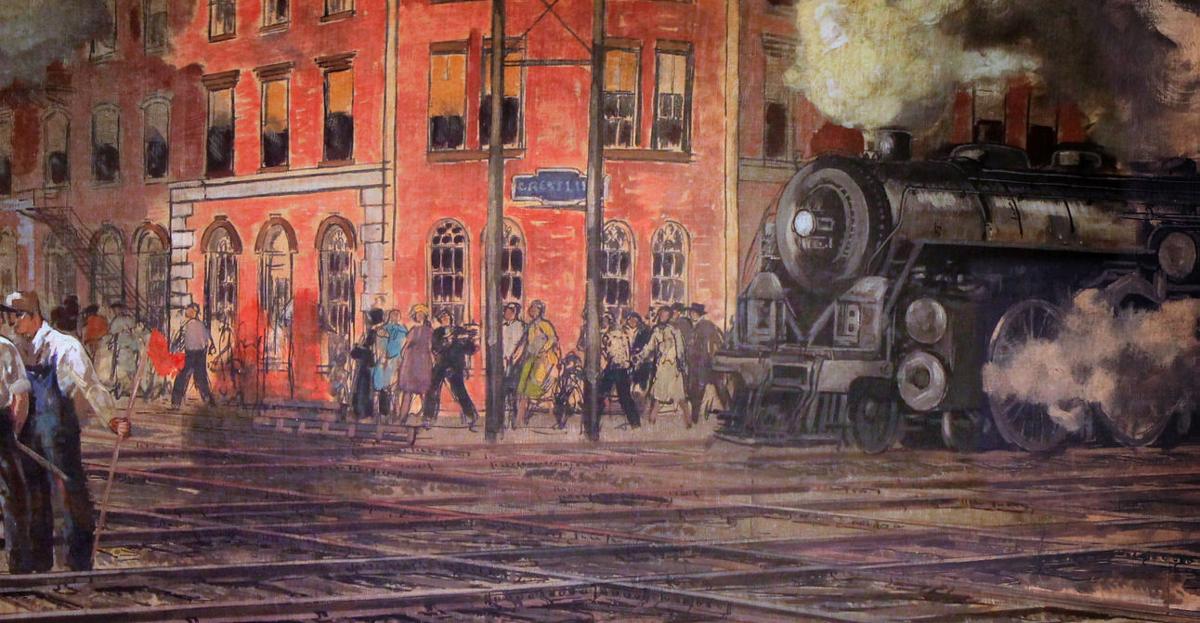 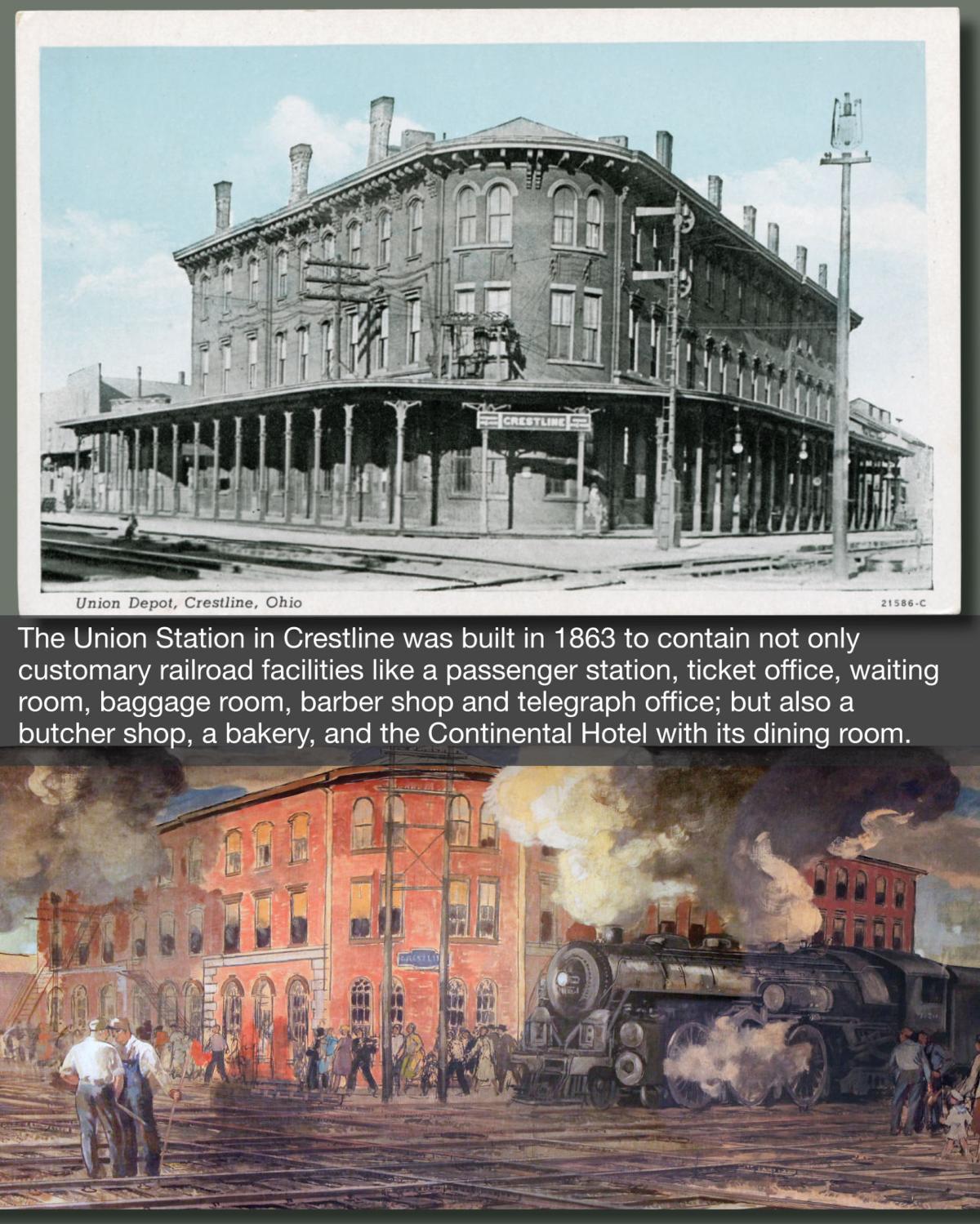 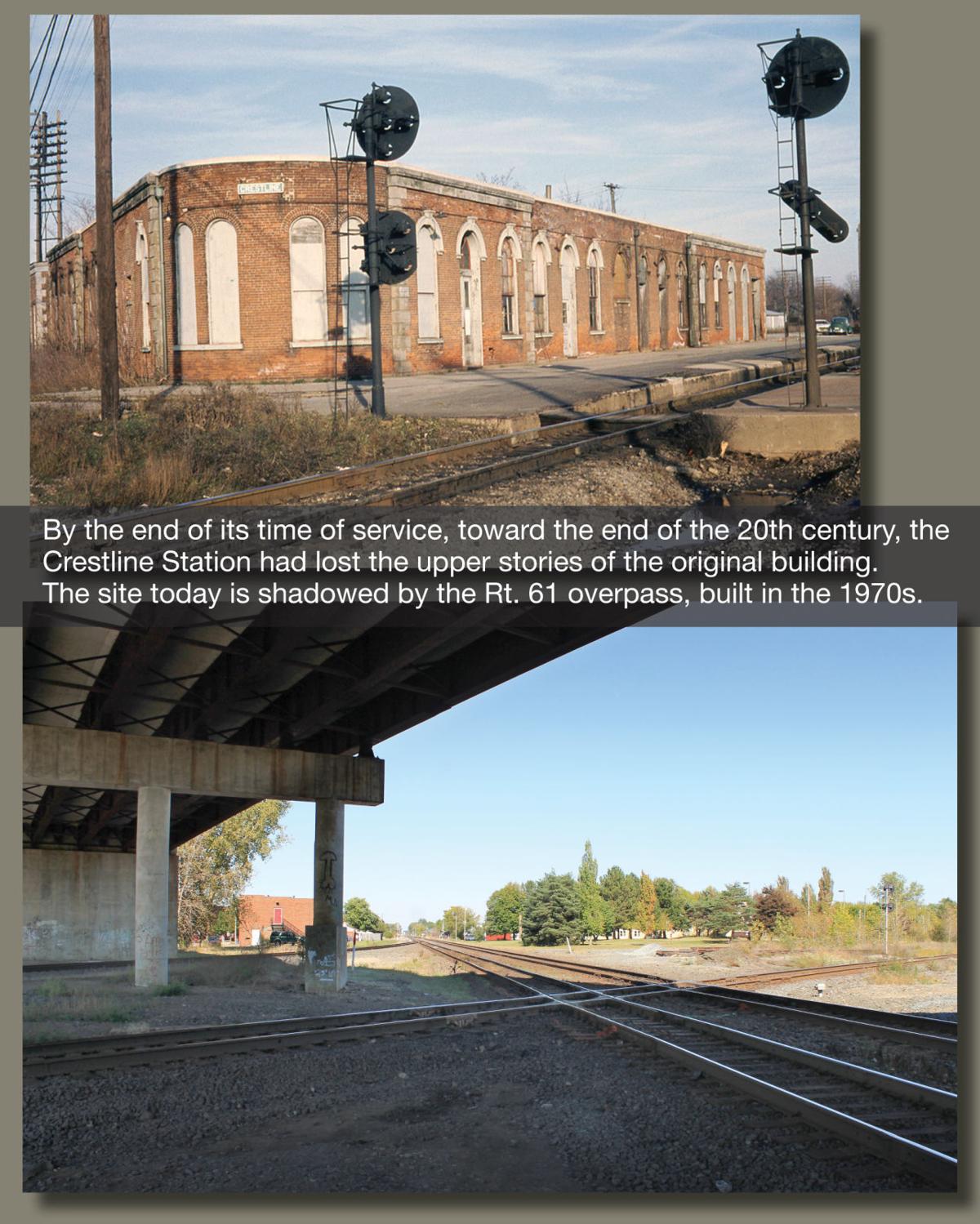 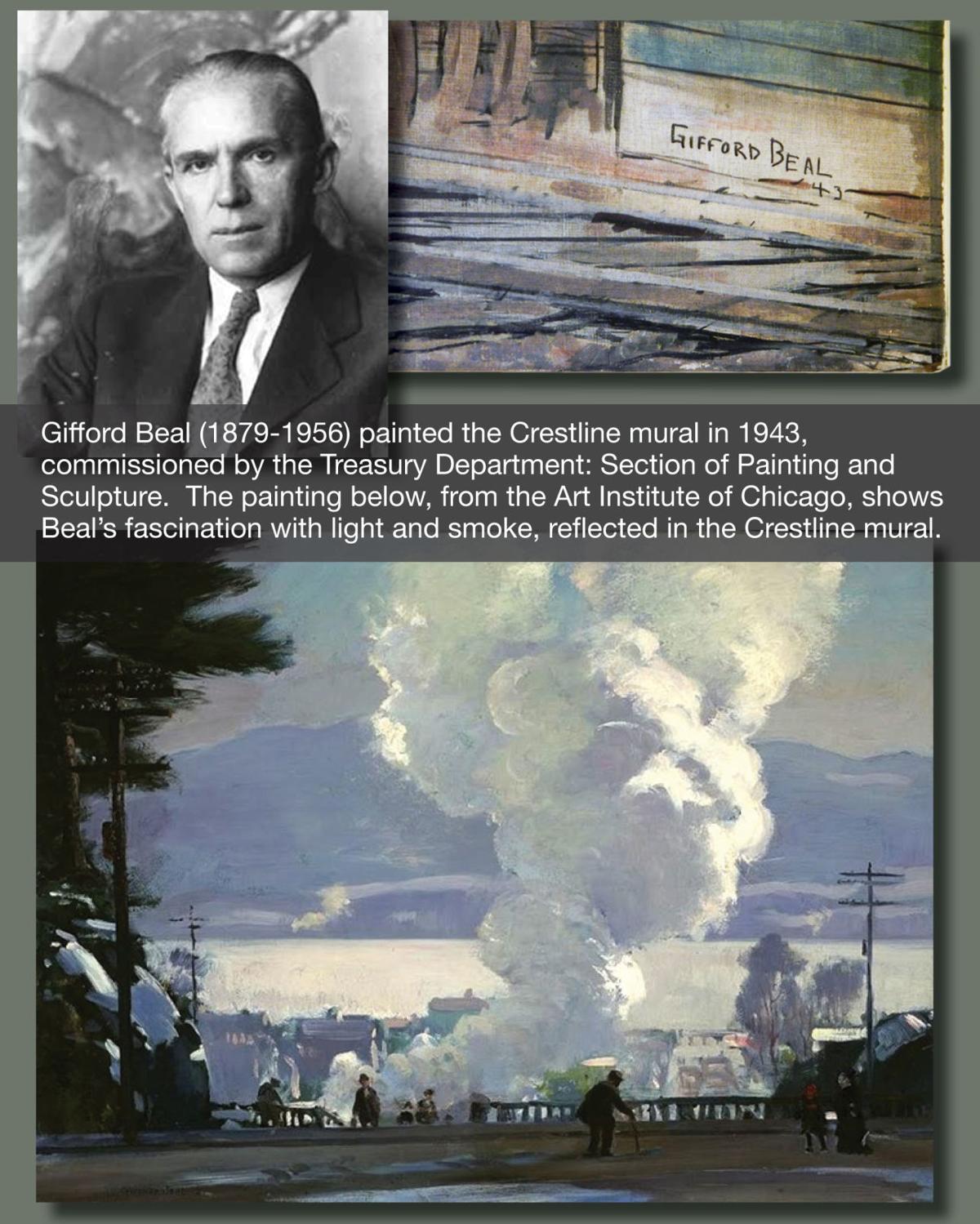 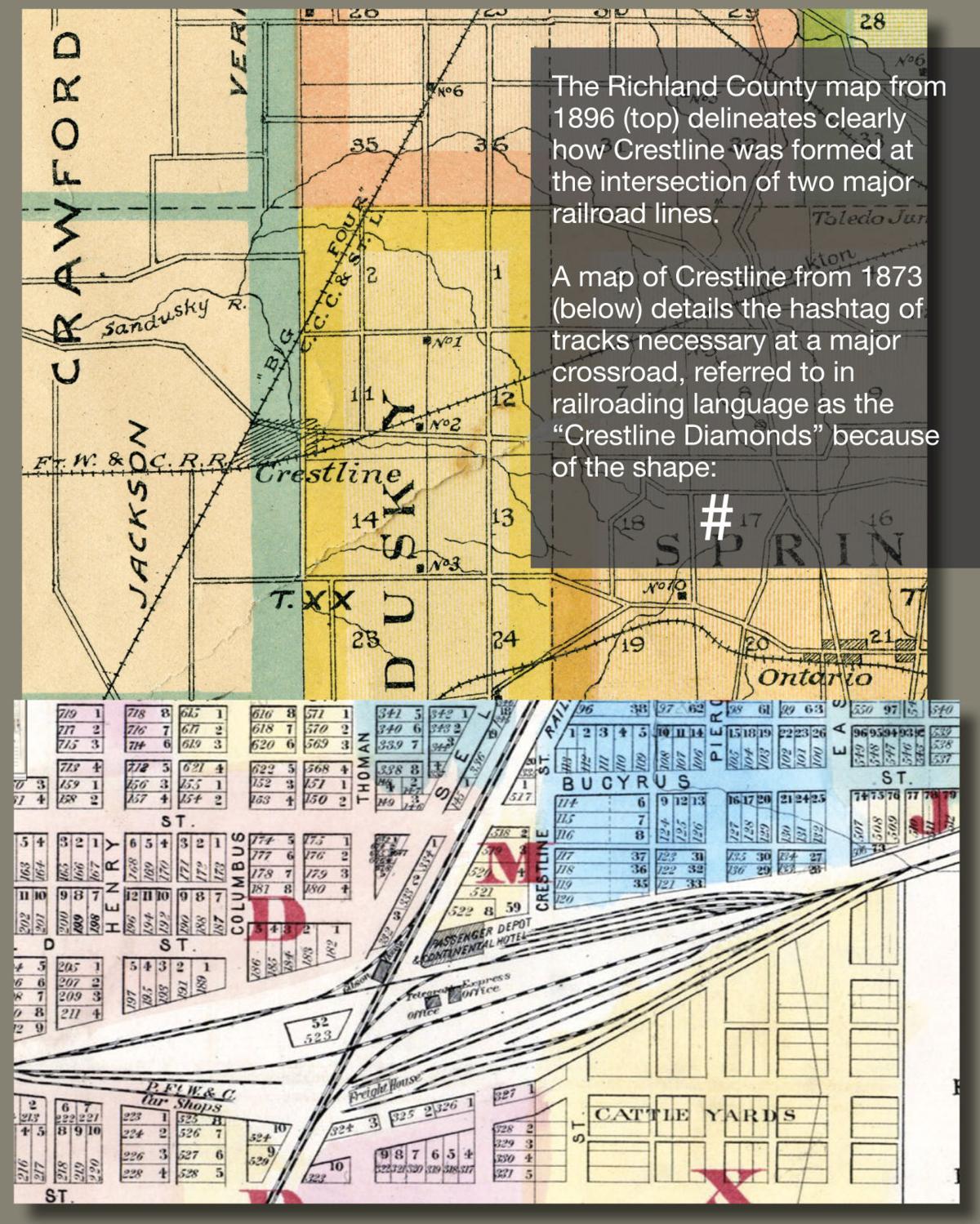 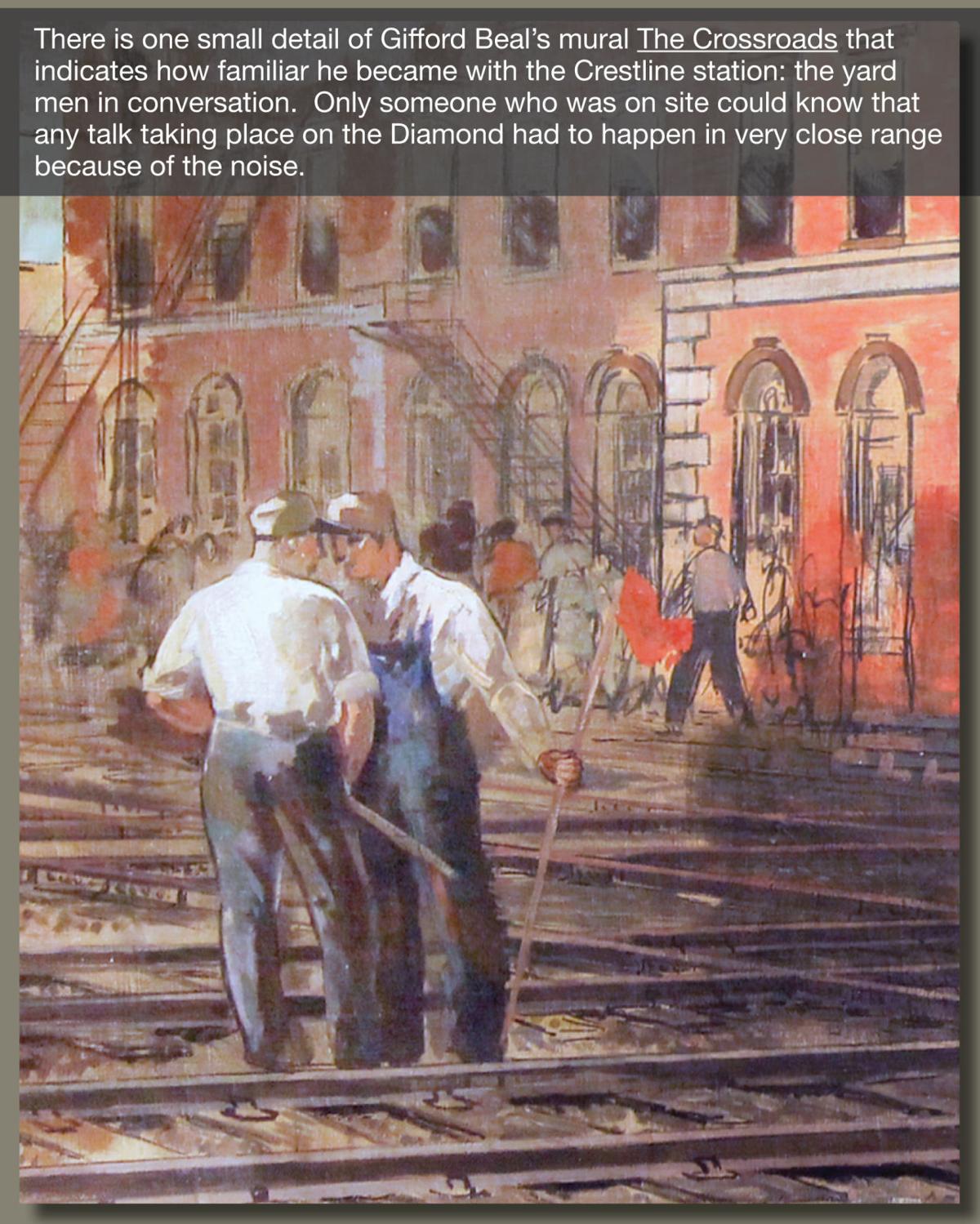 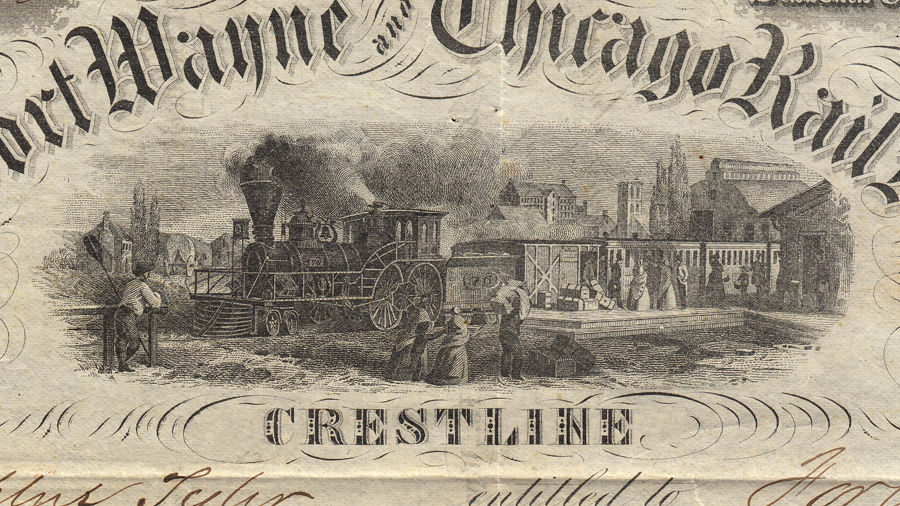 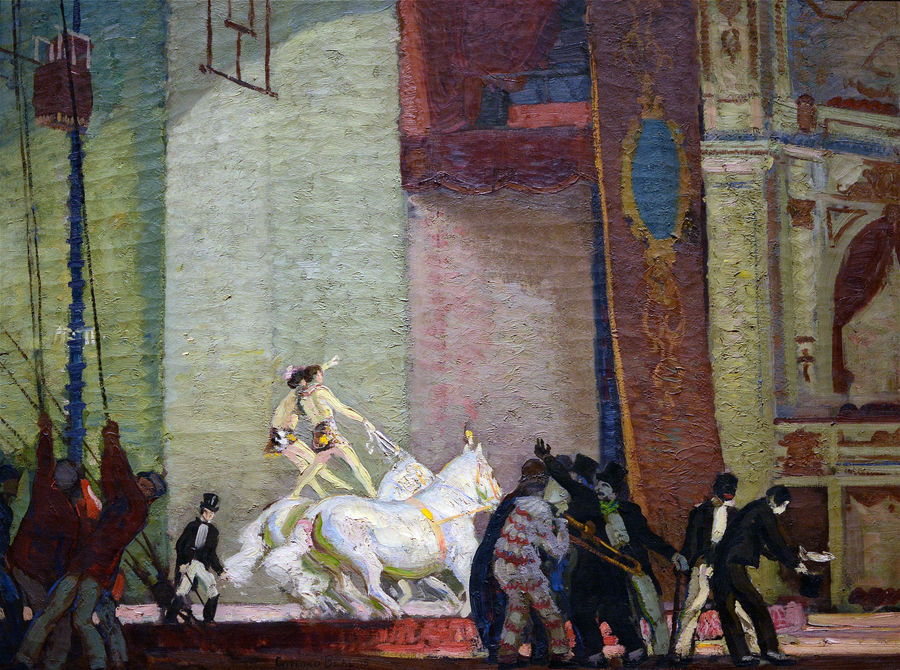 "The Spotlight" by Clifford Beal, oil on canvas 1915, Art Institute of Chicago. 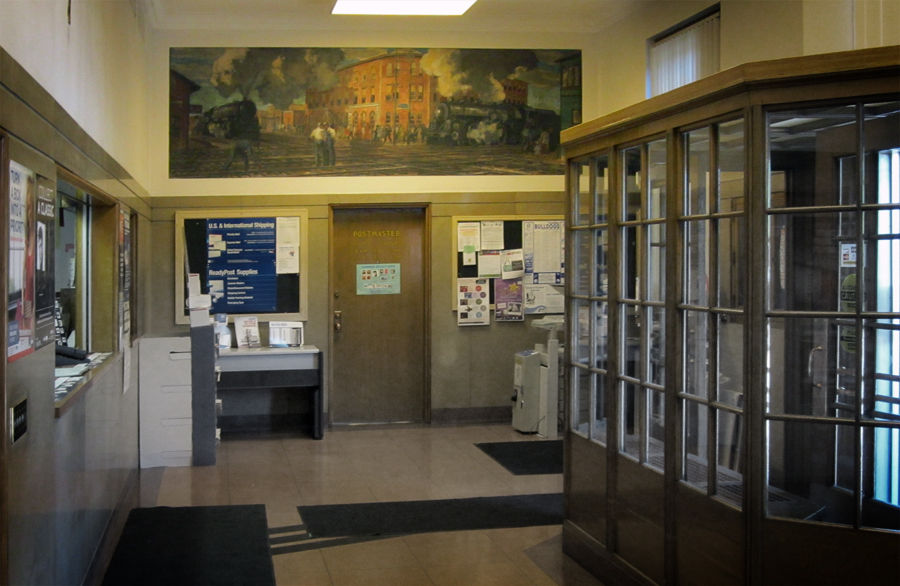 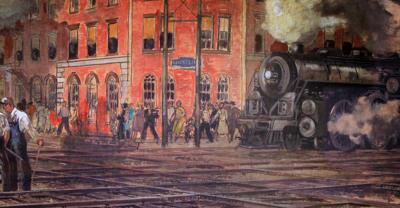 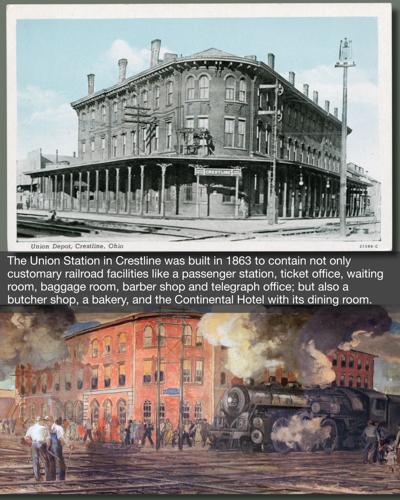 There is a certain haunting quality in the cry of a passing train. That element — evoking the past through an echo that is alive and vital in the present — is very much the spirit of Crestline.

The word ‘spirit’ comes from the Latin spiritus: meaning breath; and what is that wail of the passing train but a long sigh.

It is a sigh of nostalgia, no doubt, for what is past and gone; but also a wistful sigh of adventure for all the wide world that the railroad tracks are continually bringing to Crestline every day. It is also a sigh of fulfillment for all of the vital American commerce reflected in the living tracks that cross here.

And it is a sigh of contentment, because folks in Crestline love their town.

The spirit of Crestline has always been embodied in the world of trains and, accordingly and appropriately, there is a powerful painting capturing that spirit hanging in the heart of town.

Back in the 1930s when the national economy was stalled in the Great Depression, the U.S. government instituted programs to put American artists to work. One of these fine arts projects provided federal commissions for painters who created murals to hang on the walls of local Post Office buildings.

Through nine years of this undertaking, 850 artists created 1,400 murals and sculptures for 1,100 U.S. Post Offices.

Sixty-six of these were placed in Ohio. Of these, three-quarters of the Ohio murals were located in towns with a population of less than 5,000, because in village life a daily visit to the Post Office made it a center of social networking.

Edward Bruce, head of the Public Works of Art Program wrote, “Our objective should be to enrich the lives of all our people by making things of the spirit, the creation of beauty, part of their daily lives.”

The Post Office murals were intentionally, and very specifically local in subject matter. They intended to evoke a tone of hope in troubled times by reinforcing civic pride. The murals most often depicted either local history, or the industrial strength of each town.

In Crestline’s case the two were the same: both its 19th century historic origins; and its 20th century livelihood, were powered by locomotives.

There are two major railroads that cross in Crestline, and that accounts for its very origin.

In the 1850s when the nation was first laying rails to connect cities with ports, and industry with business, a Pittsburgh track ran west into Ohio and terminated near the crest of the Continental Divide. At the same time a Fort Wayne railroad set off east and terminated at this very same crest; so the two roads combined services where they met.

Naturally a modest station was established at this east-west junction.

Shortly thereafter another major road connecting the state in a NS-SW direction crossed the E-W tracks, creating a major intersection.

That was when the modest junction at the crest became a bona fide village and Crestline took life.

In 1941 Crestline got a new federal Post Office building and that was enough to put the town on a fast track for a federally-sponsored mural.

The artists were chosen for each mural by competition, and the conception/sketch selected for Crestline was drawn by Gifford Beal. A popular painter in this day, Beal was best known for his canvasses featuring holiday crowds and circus scenes.

His work was also selected in other mural competitions, and his paintings still cover the walls in the Allentown, Pennsylvania Post Office, and the Department of the Interior in Washington D.C.

Gifford Beal’s paintings remain highly regarded, and hang in the collections of 11 major museums in the U.S. His papers are housed in the Smithsonian Institution.

The artist at work

When he received the commission to paint Crestline’s mural, Beal was living in New York City. He made his first compositional sketches from photographs. But when it came time to distill the essence of his scene, it was easy enough for him to hop over to Grand Central Station and jump the New York Central or the Pennsylvania Railroad because they both went by different routes to the Continental Divide, and crossed at Crestline.

He got on the train in the evening, took a nice overnight snooze, and woke up exactly where he needed to be when the train stopped at Crestline. After a day of sketching and color studies of the impressive brick depot, lunch and dinner at the dining room of the Continental Hotel, Beal just hopped the eastbound, not having walked more than a few yards from where he stepped off.

The work he produced certainly rewarded his effort in traveling to the site. He was able to capture the luminous effects of the Crestline station in the evening sun as shadows move sideways, and the dark shine of dusk reflecting on the rails.

It is definitely a sundown picture: the poetry of which only deepens as the years pass, since the scene depicted is long gone.

None of the buildings in the painting exist anymore, and of course trains don’t steam like that in the sun these days. Go to the place today where the artist sketched in the 1940s and you’re standing in the shade of a highway bridge in cindery dirt with wildflower weeds.

What does remain at the site however, is the big hashtag where railroads still cross; the rails that gave Gifford Beal the title for his spirit of Crestline epic mural: “The Crossroads.”

More information about the Crestline mural is found in the photos and graphics illustrating this article.  To see them in a gallery just click on any image.