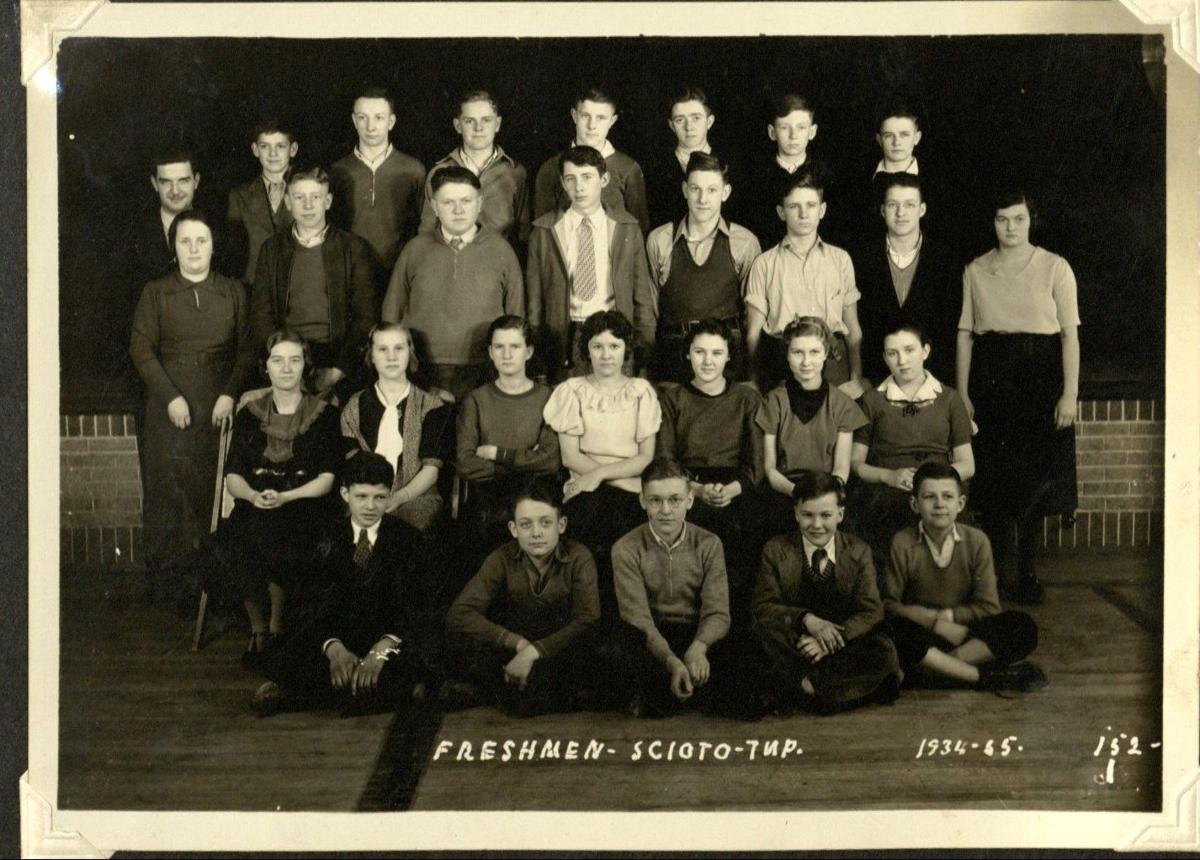 Freshman year at Scioto Township High School in 1934-35, Dorothy Beavers Pecora is second from the right in the second row. 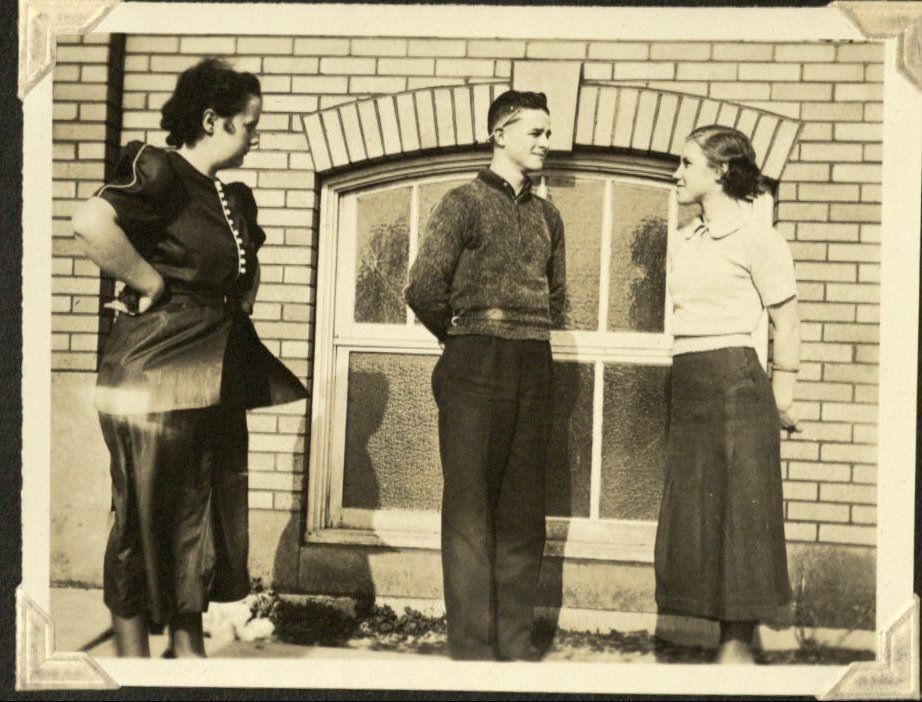 A photograph of a rehearsal from Dorothy's scrapbook. 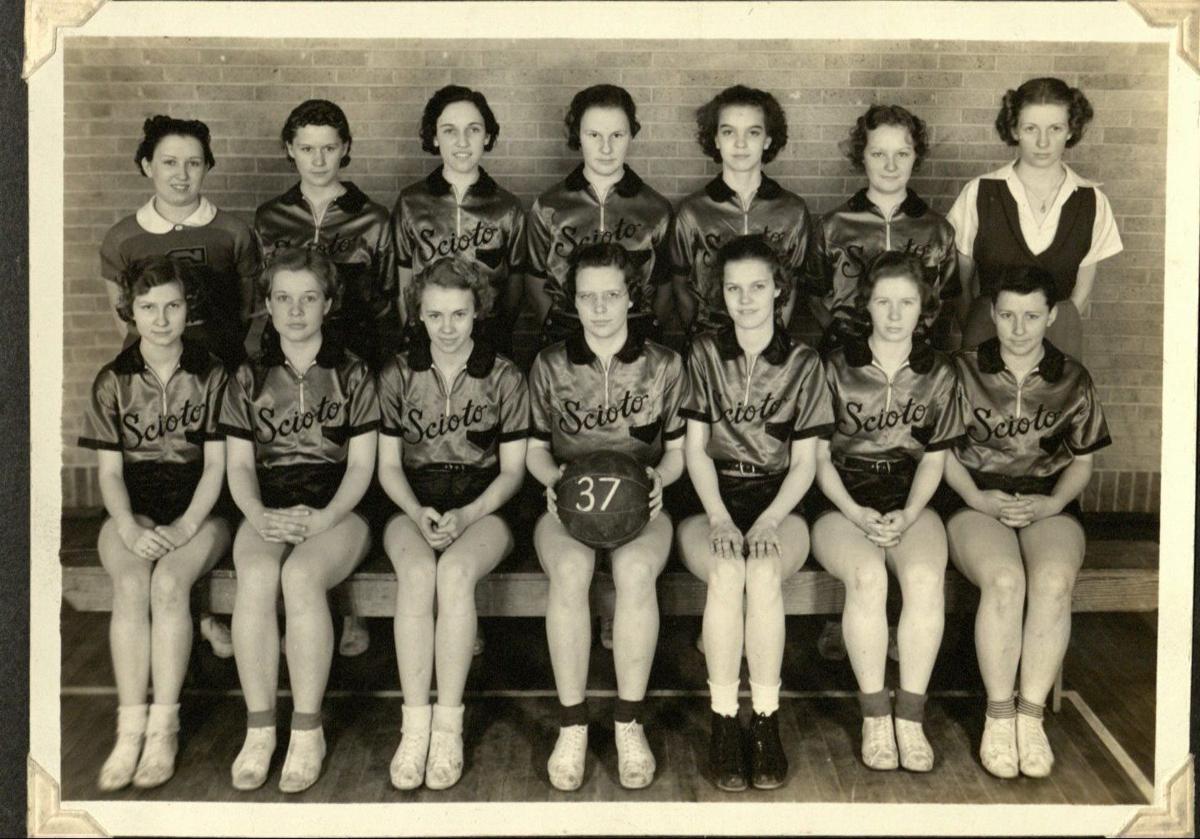 The girls' basketball team wearing their brand new jackets in 1937. Dorothy is first on the left in the first row, seated.

What was high school like in the 1930s? Sometimes it’s hard to know exactly what life was like for teenagers in the past.

Dorothy was very involved in extracurricular activities as a teenager. She played for the girls’ basketball team, spoke for the debate team, served with student council, wrote for the school yearbook, and performed in the senior class play.

Dorothy recorded many of her memories from her senior year of high school, including her participation in the senior class play. She even saved the script that she read from during rehearsal. Just as students would today, she highlighted her lines, took notes on her blocking, and attended rehearsals.

A highlight of Dorothy’s collection is her senior yearbook. Handmade by the small class of 26 students (actually the largest class to have attended Scioto Township High School at the time), this book records the personalities, dreams, and wishes of each student. Classmates wrote of Dorothy, “Did you say you were looking for a girl with true school spirit? Well, here she is — none other than Dorothy.”

Dorothy took her school spirit to the basketball court each season during her high school years. Despite the fact that Title IX would not pass for almost another 40 years, it appears as if Dorothy and her classmates took their athleticism seriously.

The girls’ basketball scores were recorded right alongside the boy’s in the Sciotonian Yearbook, and girls also had the chance to earn varsity letters. As a member of the school athletic association, Dorothy made sure that a portion of the group’s funding went to buying the girls’ basketball team new jackets.

However, it is also clear that Dorothy and her teammates did not play on an even playing field with the boys. Not only did girls have fewer choices when it came to teams to join, but the girls were also underfunded and underestimated.

Members of the boys’ basketball team were photographed wearing kneepads, while the girls, likely expected to play less aggressively, were not given this part of the uniform. Finally, as Dorothy reported in the yearbook, all senior basketball players were meant to be awarded golden basketballs, but the school appeared to have run out before each girl received one.

After high school, Dorothy went on to Mt. Carmel School of Nursing. With her training established, Beavers joined the army in 1943 and worked as a Second Lieutenant at a veterans’ hospital in Indiana. Here she met her future husband, a surgeon named David Pecora, to whom she was reintroduced on the way to Ireland in 1944.

The two were married in less than a year, with specific permission from General Dwight D. Eisenhower, and a dress and veil mailed from Dorothy’s mother. The couple were married in Southern England in July 1944, and then separated for over a year as the war continued. They were married for 70 years at the time of David’s death in 2014, spent their first year of marriage with only the military mail service to unite them.

Clearly, Dorothy’s adventures had only just begun when she received her diploma from Scioto Township High School in the spring of 1938.

Dorothy’s life is filled with many interesting stories, but with her high school papers we can see the lives of many Ohio teenagers emerge. Turning the pages of her scrapbook, you might glimpse what it meant to be young in the 1930s.