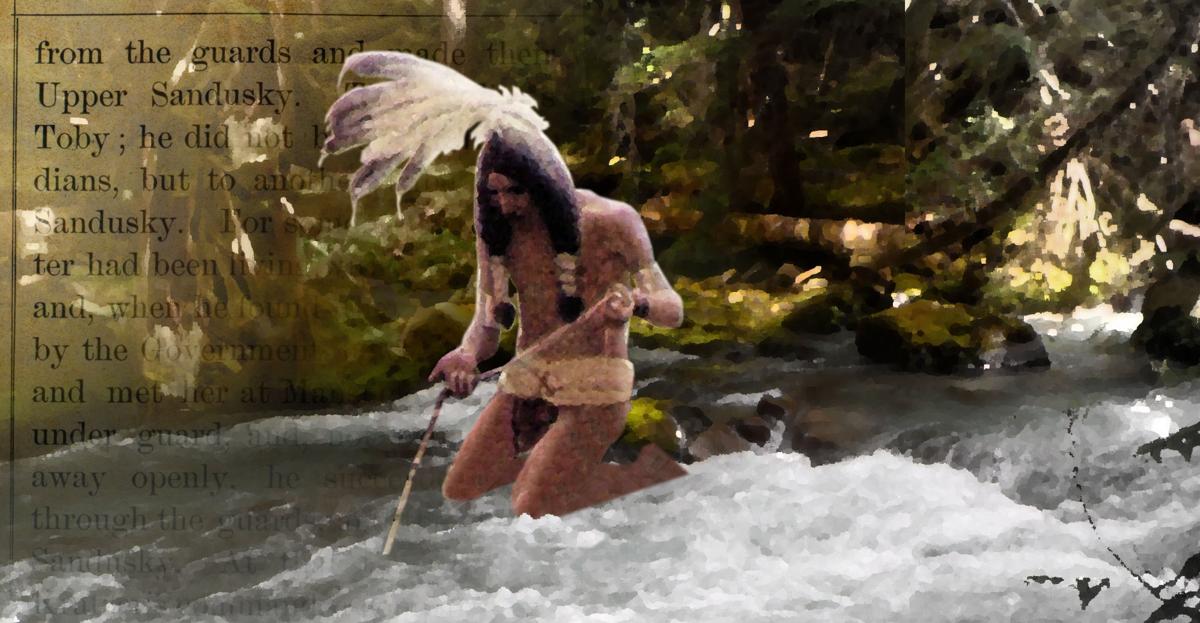 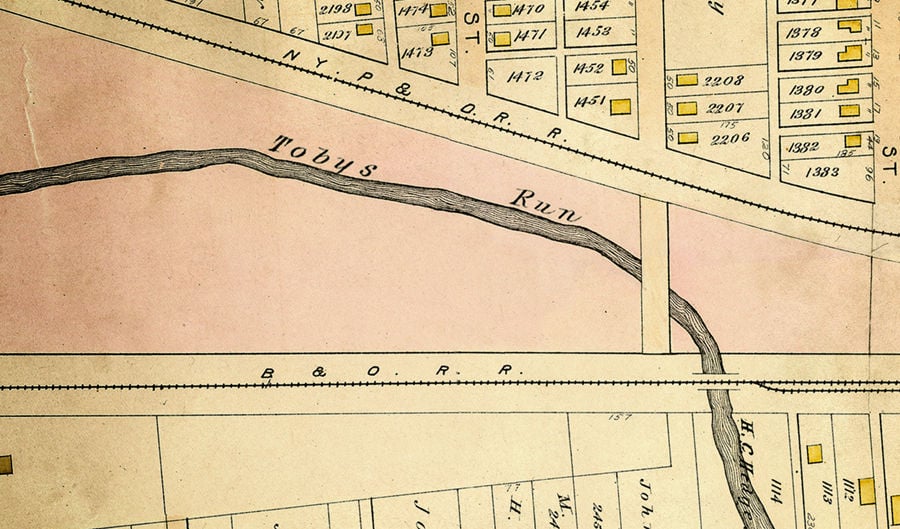 From the 1882 Atlas of the City of Mansfield.  In later maps it was sometimes spelled Touby's Run, and today it appears on maps spelled either way. 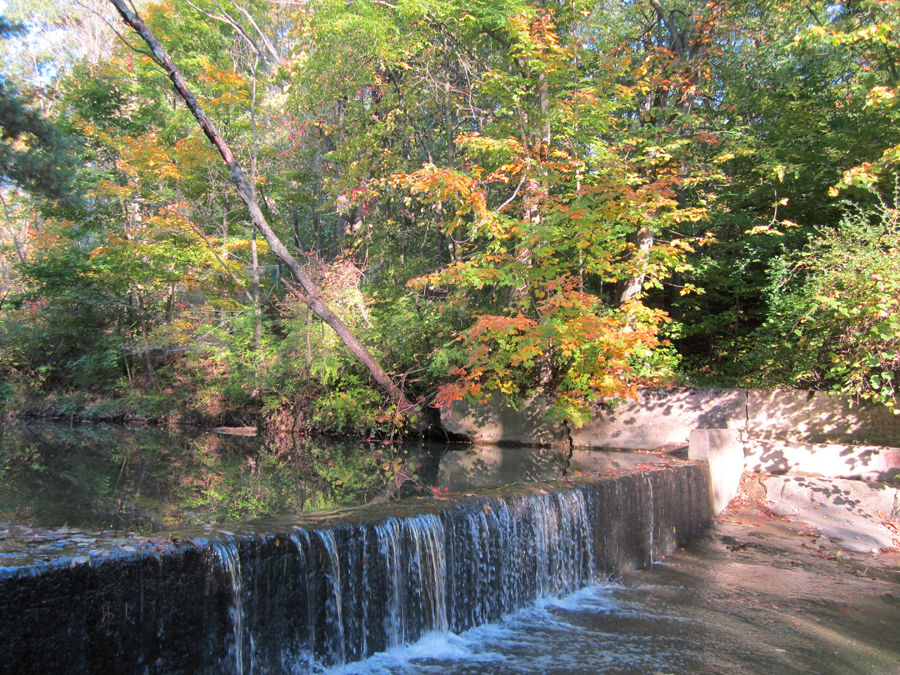 The detainment camp in Mansfield where the Greentown villagers stayed was located just off South Main Street below the Square.

The hollow where Greentown villagers were kept under guard is partially paved today, near the intersection of First and South Walnut Streets. 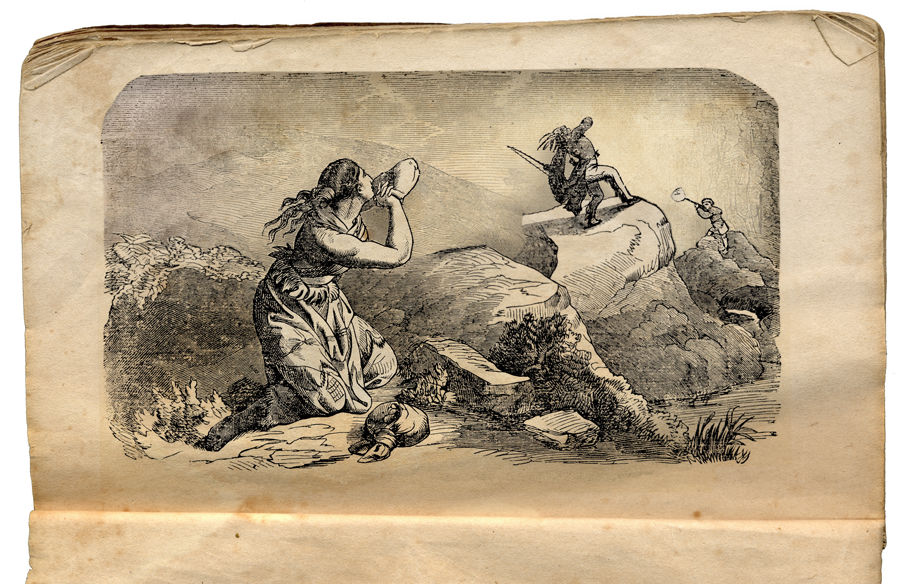 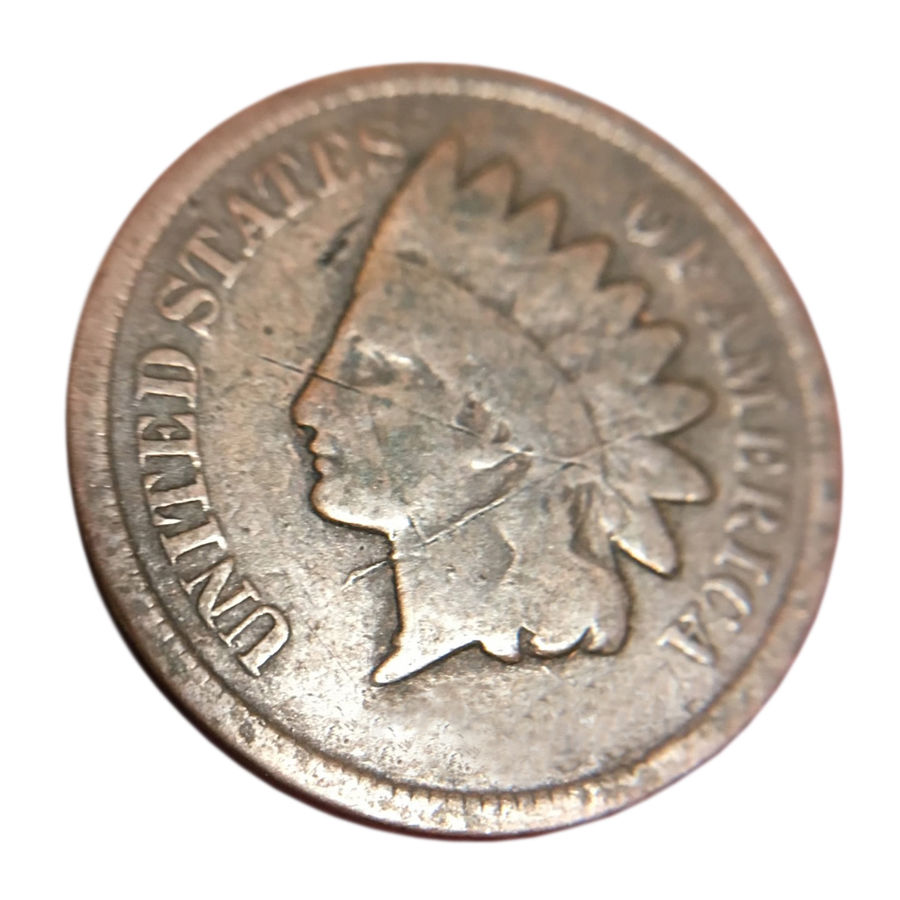 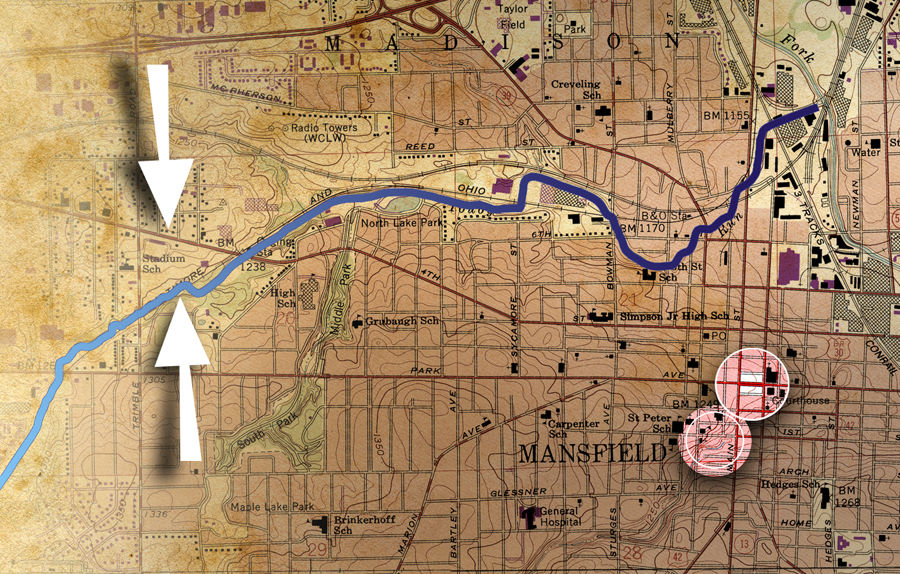 The earliest accounts say that Toby was shot 2 miles from the Square on the road to Upper Sandusky, which would put the scene of the crime on West Fourth Street around Trimble Road.  From there Toby managed to scramble "forty rods to a stream," where he collapsed and was subsequently slain.  This would put the site of Toby's demise somewhere behind Kingwood Center Gardens. 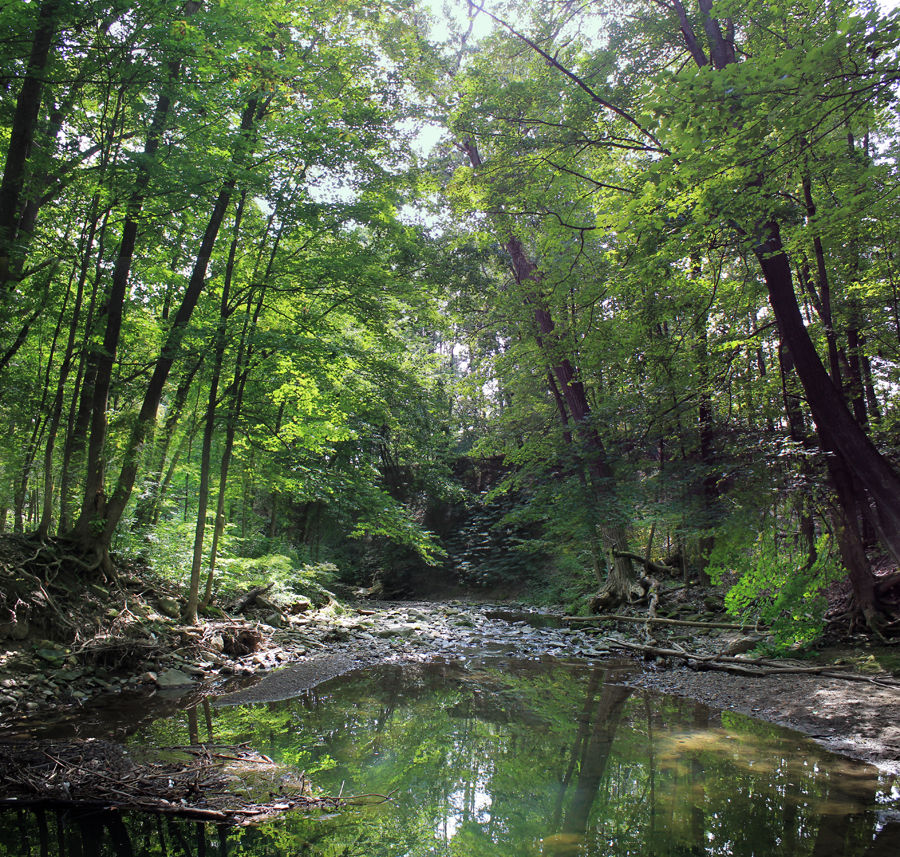 This peaceful shot of Toby's Run was taken from a bridge where the Richland B&O Trail crosses the stream behind Kingwood, in the approximate area where Toby gave his name to the creek. 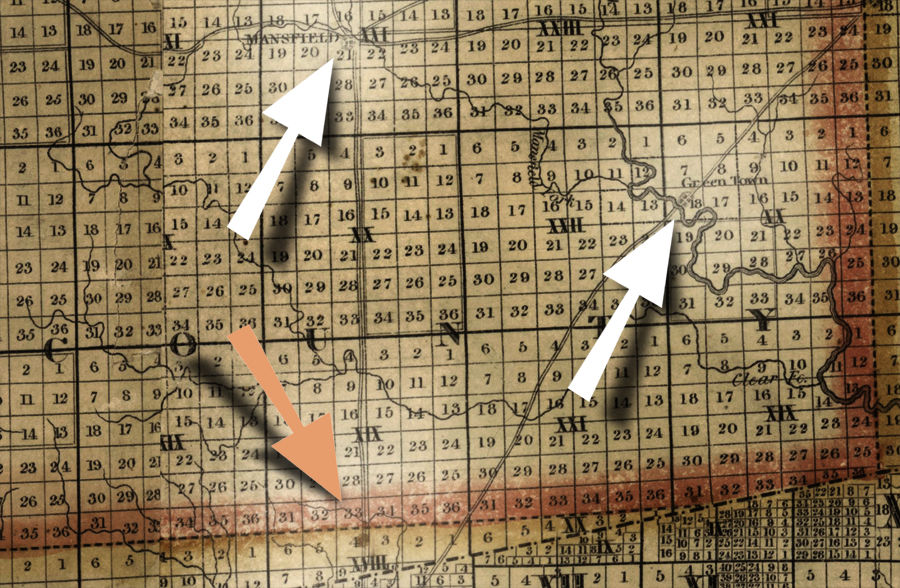 This 1915 map of Ohio done from surveys shows Mansfield, Greentown,and the site of Toby Run crossing the county's southern border. 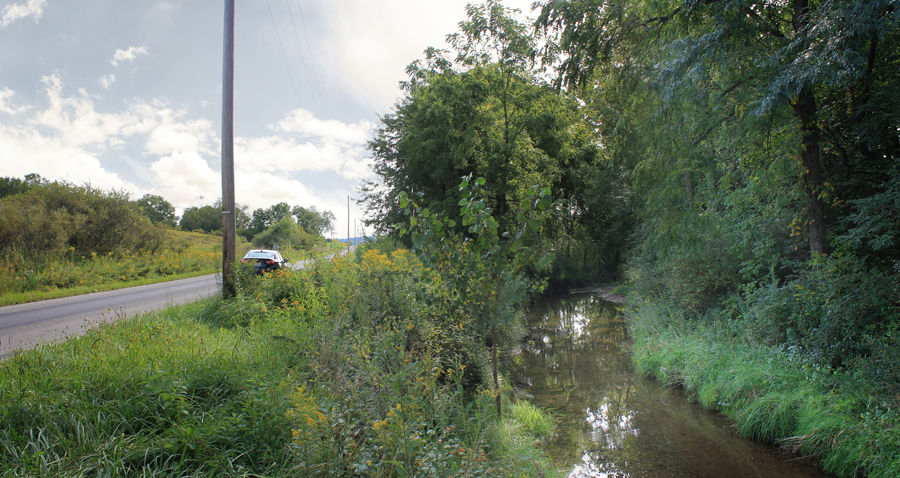 A view of Toby Run from Hamilton Road, in Jefferson Township.

The valley that Toby knew in 1812 as a deep forest is today rich green farmland. 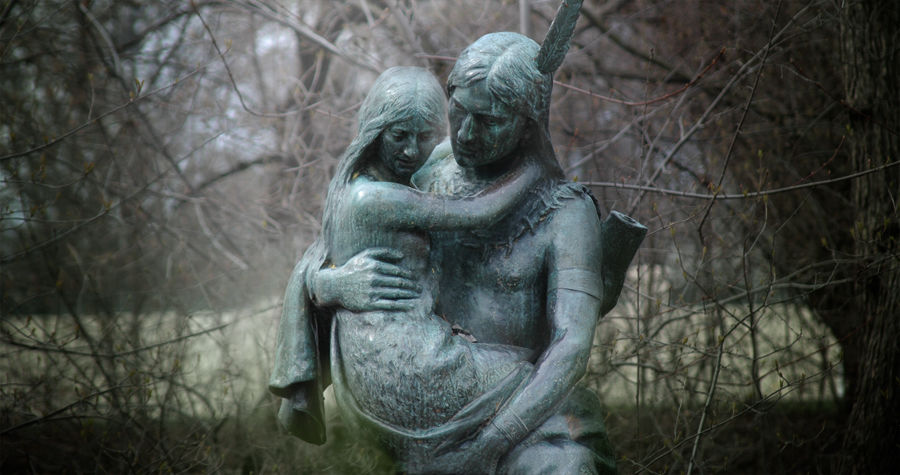 For 200 years the character of Toby has been cast in local legend as a hapless victim, when he was truly a heroic character who risked his life to rescue his young daughter.  During the months after Toby's death it was reported in Mansfield by Johnny Appleseed that the girl had made her way alone safely back to her home in Upper Sandusky.

There is a creek in the north end of Mansfield called Toby’s Run.  If you have been on the Richland B&O Trail in the miles nearest its terminus at North Lake Park, then you are familiar with the stream.

The old waterway got its name from a Wyandot fisherman who was killed there during the War of 1812.  Toby’s Run is actually named because of a crime, and when you know the story it’s a shame to think that this was written in history as some sort of thrilling frontier adventure when it was plainly a brutal disgrace.

It’s an ugly story that has been lurking in the background of Mansfield history for 200 years, casting its degrading shadow across the north end of town.

It’s a tale that must be told, but let’s give the stream some dignity by focusing on the true hero of the story: the stream is named for Toby because he was the one person in this scenario who was trying to do the right thing.

It is ironic that the creek is named not only for the man who was slain there, but also for the last terrifying and heroic moments of his life: it is known as Toby’s Run.  He ran for his life, and to save the life of his daughter.

This Mansfield legend happened in the blockhouse days of the early town.

It was 1812 and the war was just getting underway. In June, the US officially declared war on the British. In July, life was tense, but it seemed as if things were going our way.

In August it all blew apart. The American frontier suffered a catastrophic defeat when Fort Detroit surrendered, so everyone in Richland County got very nervous; because we were, at that time, the cutting edge of civilization in the western wilderness.

To all appearances, the tribal factions of Ohio woodland Indians were throwing their support to the British; yet the peaceable Wyandots, Lenape, Mohawks and Mingos, at the nearby village of Greentown, had no intention of joining the fight.

To the commanders of the US militia however, who were stationed at the new Mansfield blockhouses, the local American Indian population represented a threat.

Somehow the army convinced the Greentown Indians to leave the Mohican territory until after the war got sorted out.

The people of the tribal village were marched 100 miles as a group under military guard, from their home near Loudonville to a concentration camp near Urbana. They left Greentown around the first of September.

The first day they walked about 15 miles and camped overnight near Lucas.

By the second night they had reached Mansfield.

In 1812 everything that could be considered Mansfield was on the Square or within shouting distance. The two blockhouses were laid out as a standard US military fort, only without the typical blockade picket fence so the Square was relatively open and unsecured.

The Greentown detainees were, instead, placed into a holding area with walls of earth: a nearby gully where guards could be posted at the mouth of the small hollow.

Today the site is found to the south side of West First Street near South Main Street, about 300 yards from the Square.

Toby was an old Wyandot gentleman who lived by himself, in a valley 15 miles south of Mansfield. He was not even a part of the Greentown village group; but he had a young daughter who happened to be visiting Greentown at the time it was mobilized.

Toby determined to take his daughter to her home in Upper Sandusky where she belonged.

To do this, he needed to slip her out of the guarded encampment in Mansfield when no one was looking.

In subsequent accounts of these events, written decades later when folks were still trying, more or less, to justify the tragedy, it was stated that “two of the Indians escaped.”

Musket fire in the woods

A couple militia men were dispatched to capture the fugitives and bring them back. They later said they had orders to shoot, but it sounded like equivocation in retrospect, because the two men who went off to hunt down the escaped Indians were avowed and documented Indian-haters.

One of the two men had lost a brother in an Indian battle barely a week earlier, and had entered the chase with the single-minded focus of revenge.

When he spotted the Indian dashing through the forest it only took a single shot to drop the old man.

The rest of the legend is told in rather excruciating detail on the pages of local histories if you need to know the gory details. I’ll give you the outline so you can appreciate what I’m skipping over.

When it was reported at camp that an Indian had been shot, a detail of men was dispatched to find out if he was killed. The small party who discovered Toby in the woods, found him still alive where he had collapsed in the creek. The bleeding old man pleaded his friendship to all settlers, yet the vengeful soldier put an end to him with a tomahawk.

It only gets more brutal after that, and if you ever wondered whether Mansfield had incurred a karmic debt from hits earliest days of foul dealings with the Native Americans, all you have to do is read about Toby’s head on a post in the public Square.

Accounts say Toby was not buried, but a few logs were piled over him as a makeshift grave. A decade later witnesses said the bleached bones of his ribs were still visible in the sandy banks of Toby’s Run.

A change of perspective

This is the official Mansfield tale of Toby, and you can see how it leaves a rather ungracious spirit over the naming of our landmark waterway.

I would like to take a moment to realign the sentiments and inferences of the man behind Toby’s Run.

If you look into the histories of Knox County, immediately south of the Richland border, there is mention made of an old Wyandot gentleman who lived there, whose name was Toby.

Pioneers in the forest there knew him as a kindly old soul who lived by himself along the banks of a small stream, from which he drew his livelihood as an expert fisherman and a trapper of waterfowl.

He was notable in the area because there were no American Indian villages in that county, and he seemed to be the only Native American in permanent residence.

The other very interesting record of him from Knox annals was that in 1812 he mysteriously and unaccountable disappeared. They wondered why he would go away and not say goodbye.

So it turns out that there are actually two streams in Richland County named after Toby: one is where he died; the other is where he lived.

Maps of the southernmost townships of Richland County show a waterway that cuts from Bangorville eastward above Ankneytown; through a beautiful valley of rich farmland; and across the border into Knox County where it flows into the East Branch of the Kokosing River.

In our time it is not much of a stream: shallow, and slipping between fields under a canopy of thorny raspberries and hawthorn; but before the crop lands were laid out—200 years ago when this valley was under a 100 foot canopy of beech and oak—this stream ran much deeper.

In Toby’s lifetime this stream was full of wildlife, and the idea of fishing that stream back in 1812 holds promise of endless dinners. Even the day I hiked his creek there were two pairs of ducks that flashed up from the green pools.

It was a peaceful existence; and a much more appropriate way to remember a gentle man whose protective love for a young girl led him away from this stream, to leave his name forever on another stream in Mansfield.

There are two creeks that remember Toby: one is where he died, the other is where he lived.