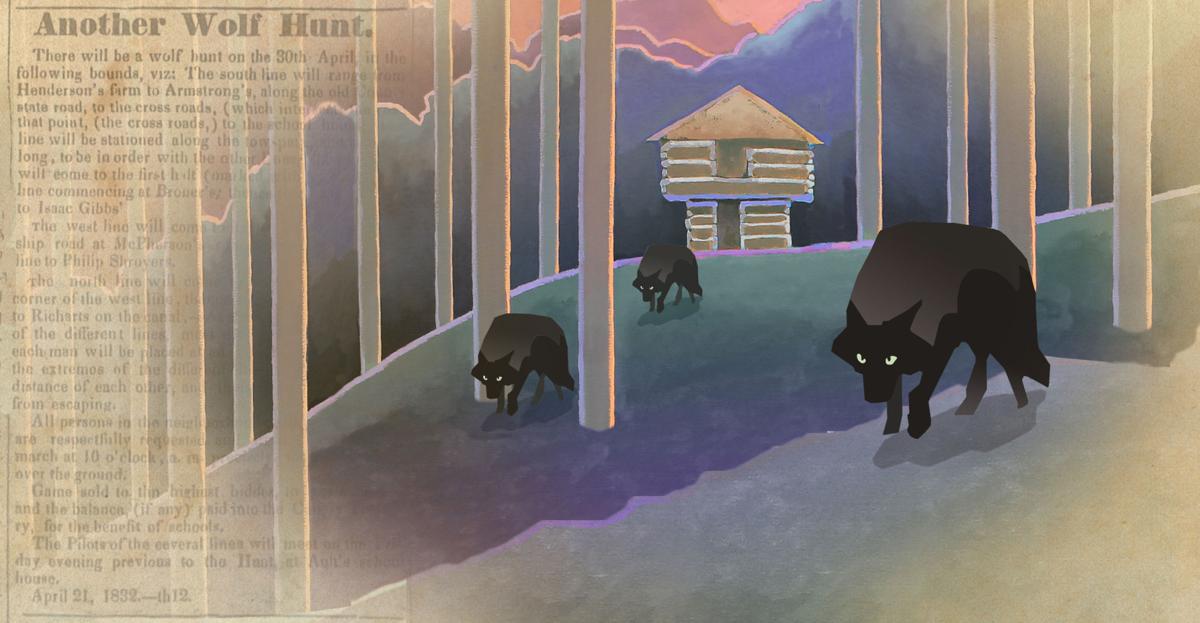 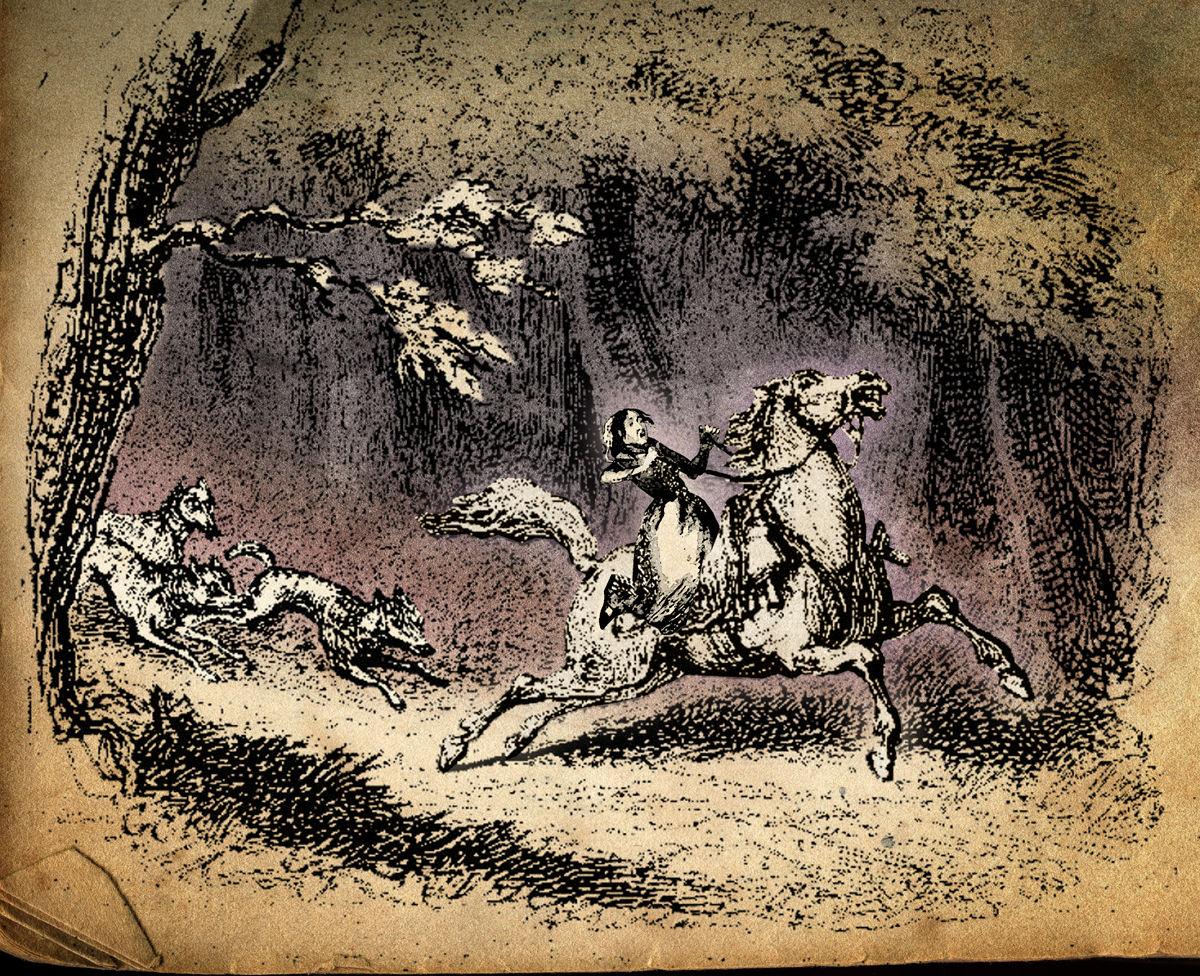 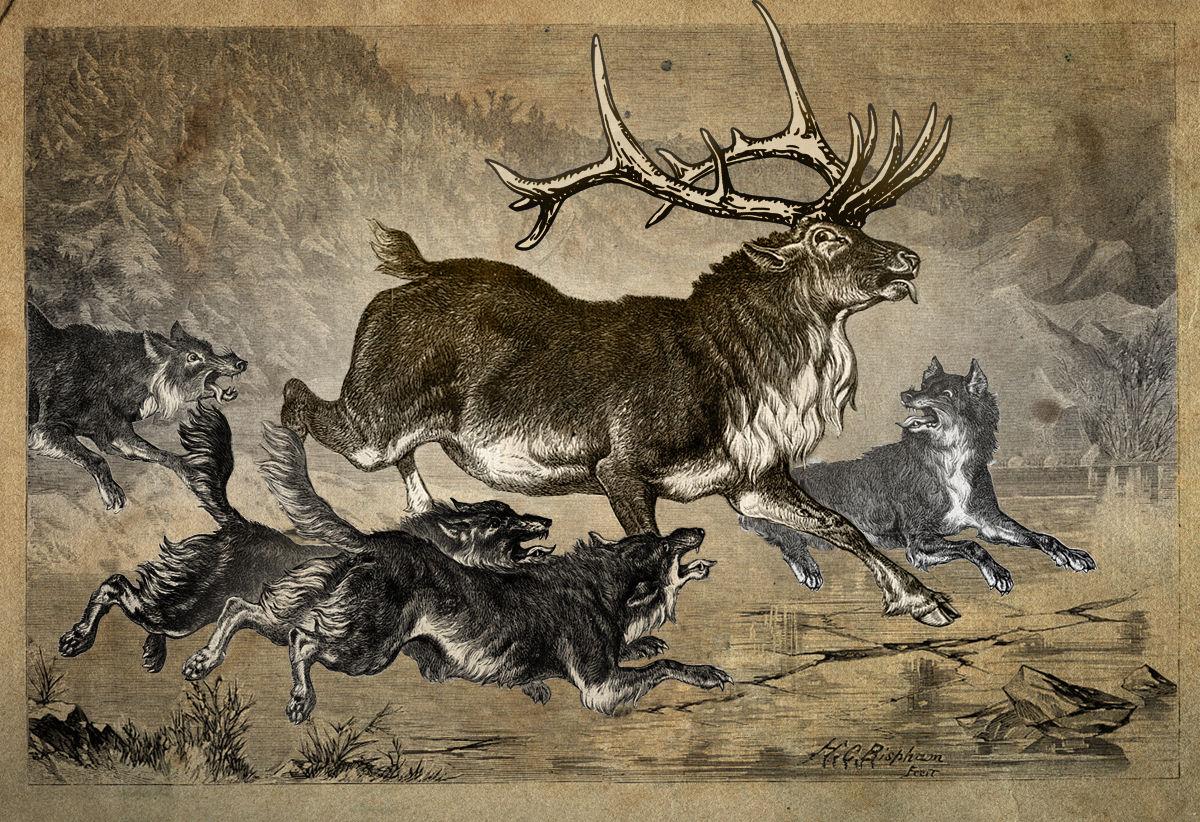 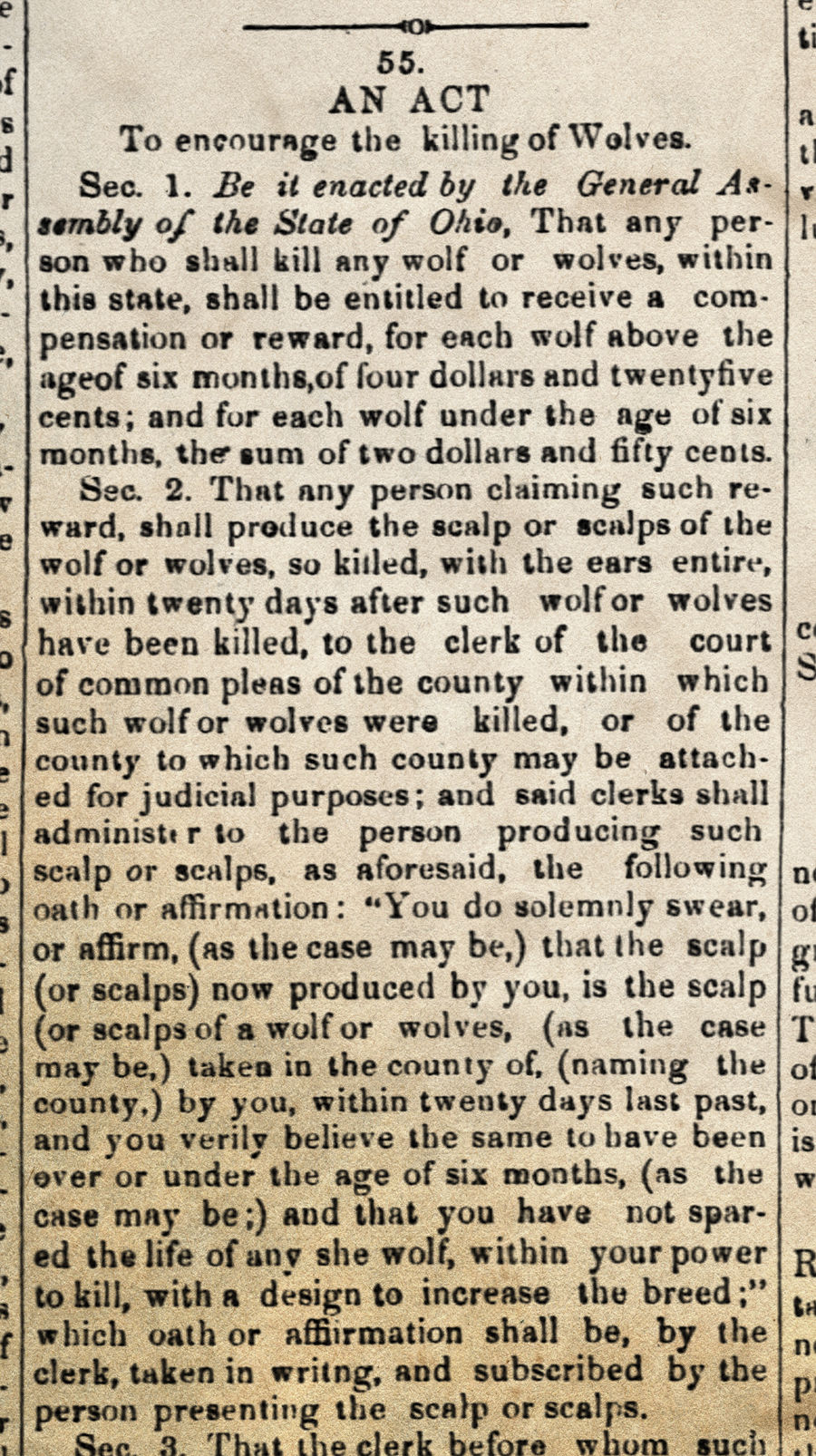 The wolf bounty law of Ohio was amended in 1850 to increase payments to hunters.  By then, all the wolves were already hunted out of Richland County.

In order to collect the bounty, any hunter had to present proof of the kill in the form of a wolf's pelt which included the animal's ears...hence the term 'wolf scalp.'  The payment included documentation, like this "Scalp Certificate" from 1814. 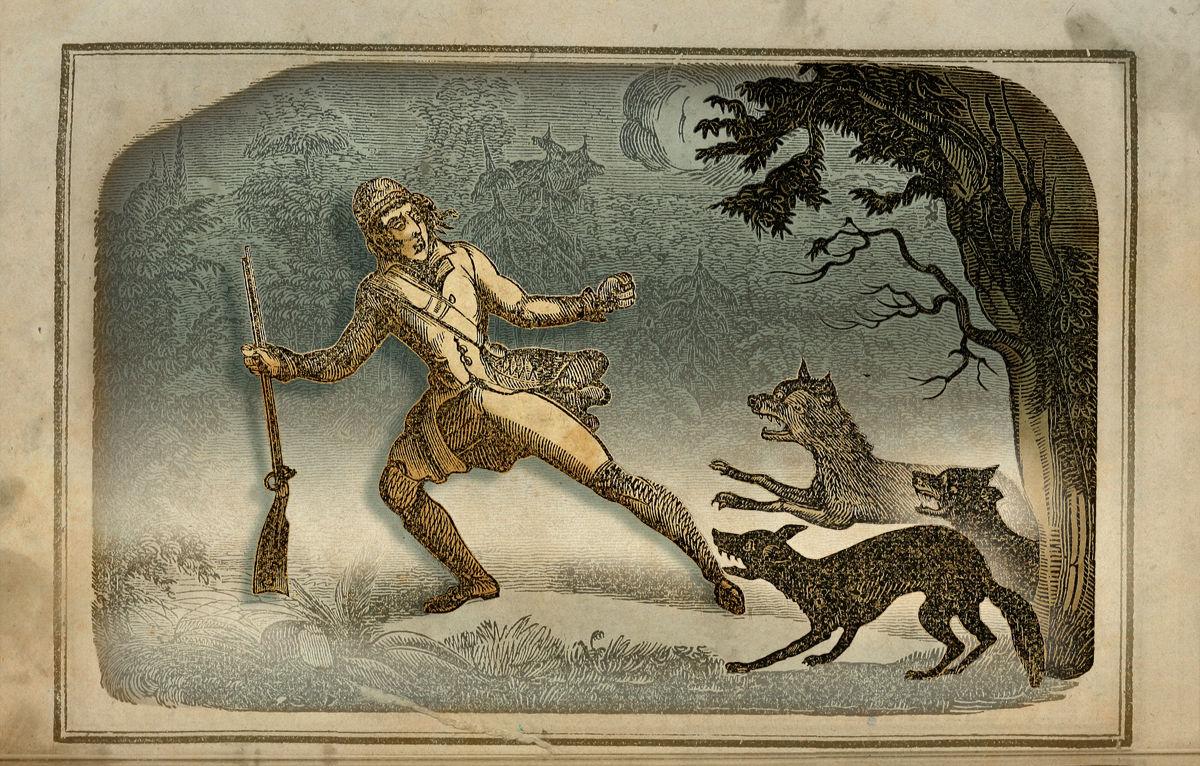 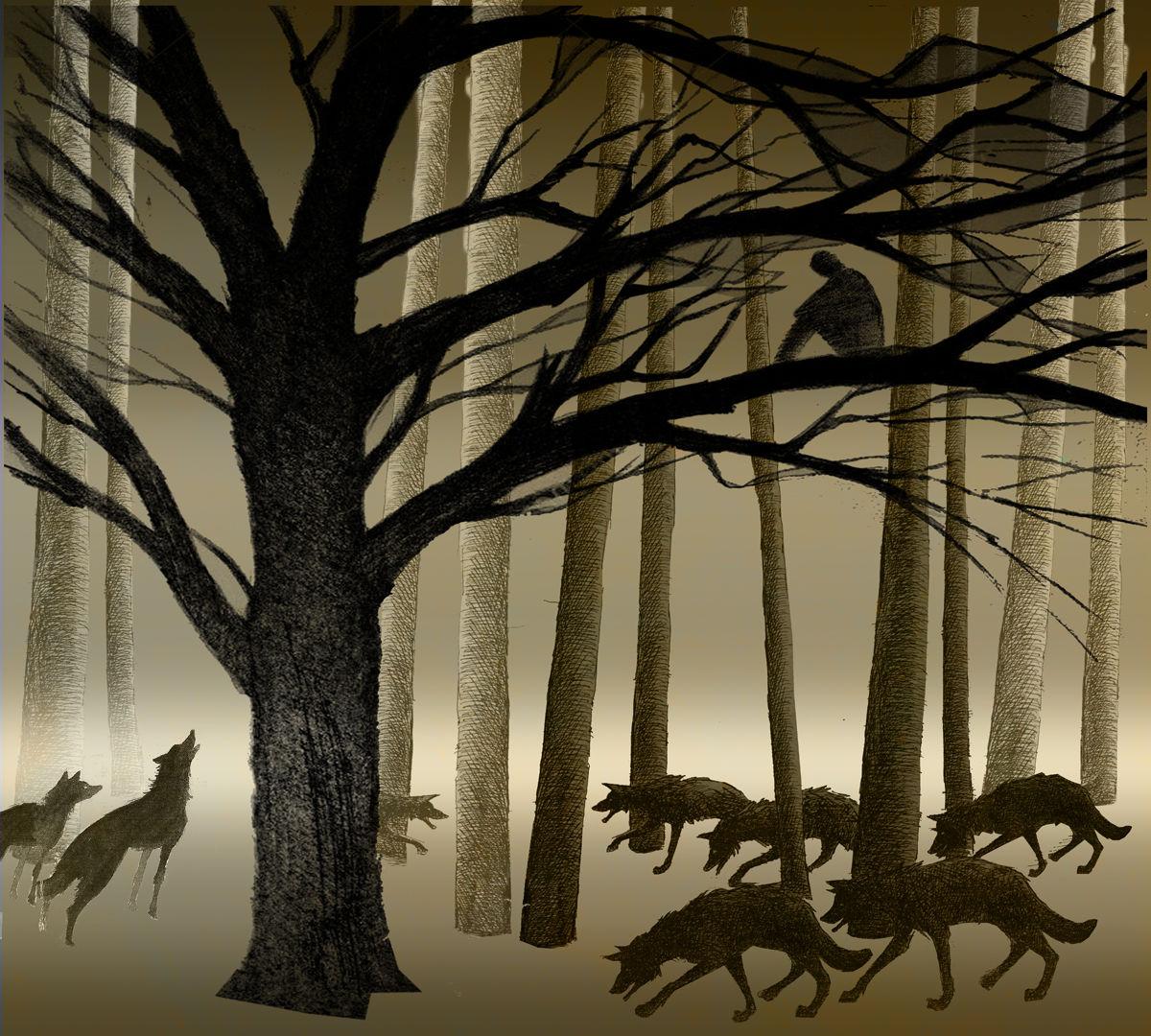 This sounds like an exaggeration until you read accounts of 1820, when Rachel Gatton found herself unexpectedly demoted down the food chain.

For some reason that day, she thought it seemed safe enough to ride from Bellville to Mansfield on her horse by herself. It's about nine miles and, at a moderate gait, the road trip should have taken around two hours for each part of the journey.

It most likely did require a full two hours to get to Mansfield, but it took her only about half that time to get home, because she was racing the last five miles. Racing for her life, in fact. Rachel was only halfway home when wolves picked up her scent, and sprinted out of the woods in hot pursuit.

It's important to understand that the lovely green fields, and vistas of scenic landscapes we enjoy today traveling between Bellville and Mansfield, did not exist in 1820. The road from here to there was little more than a wide clearing in the dark forest.

Barreling along at 30 mph, it looked more like the jaws of death closing in slowly on either side.

Rachel was about 24 years old at the time, and fortunately, her horse was similarly young and nimble and sharp. Of course, terror always adds an augmented element of courage and agility to anyone’s skill set.

The leaping wolves were going at the horse’s flanks, yet the steed managed to dodge and plunge and twist and kick as it tore through the forest. Rachel’s task was simply to stay on top.

Wolves are pernicious and masterly predators, as Jacob Grey noted in his diary of 1819, when he watched a small pack of them take down a huge dashing elk on the banks of the Mohican River. Overwhelming size, accelerated fleetness, and deadly kicking were no serious impediment to hungry wolves, when hoofed dinner was on the forest buffet.

So it's really nothing short of miraculous that Rachel made it back to the family cabin that day. A rendering of the event can hardly be documented in words. A mere paragraph in the County History cannot capture adequately what this story actually meant to the people of 1820 on the Richland frontier.

Wolves were a very clear and present danger, and above and beyond that threat, there were panthers and bears who regularly feasted on pioneer’s livestock. Pioneers, themselves, were only another course on the menu.

The rich land, the forest bounty

The settlers of Richland County had every reason to hate and fear and kill wolves in the early decades of the 1800s. But hate and fear, it turns out, are not prime motivators when it comes to actually engaging in the difficult work of truly rooting out the problem from the forests and fields of the Forks of the Mohican.

What it took was cash.

Early County Auditor’s reports have a line item listed right underneath Judges’ salaries that is labeled, “Wolf Scalps.” In 1828, they paid out $308 for wolf bounties.

We know pretty accurately when it was in the 1800s that wolves died out in Richland County, because by 1834 they only paid out $4.08 for wolf scalps.

So the entire epoch of Pioneer vs. Timber Wolf incidents took place in a few quick decades of Richland’s history, from 1808 to the early 1830s. There was one notable wolf hunt during that era, in 1828 near Adario, when dozens of men surrounded a grove full of wolves and trapped them in a creek bed. But the best story to come from this epic and perilous time involved only one man in Franklin Township, and his dog.

We have this story from the man’s son, Robert Yeager, who wrote an account for the newspaper about his father: denoted in the document as Jos., which stood for Josiah.

Josiah was out with his dog one day and, having fired on a turkey, was reloading his rifle when some wolves rose up between him and his cabin. At first there were three; then there were five. Before the night was over, there were nine.

The man was able to point and wave his empty rifle fiercely enough to buy time so he could scramble up a nearby tree, to a limb high above the wolves.

Unfortunately, he couldn’t get his dog up the trunk quickly enough, and the wolves fell upon his friend.

Having dropped his powder horn in the fearful rush, Jos. was without any means of driving off the wolves, who prowled underneath his perch for hours.

When darkness fell and the wolves began to howl, Mr. Yeager said it was the only time in his life when he felt a kinship with the loathsome beasts: the cry they made seemed an echo of the loneliness and solitude, fear and grief he himself was feeling. They howled for him.

Having to watch the wolves tear apart his favorite dog seemed the lowest moment of his life, but that night it proved to be the luckiest turn of events. The dog’s blood had been spilt on the ground, and the scent of it brought in another predator.

When the bear walked in; the wolves took off.

In a moment, Jos. was sprinting home. One bear, he said, looked like nothing after nine wolves.