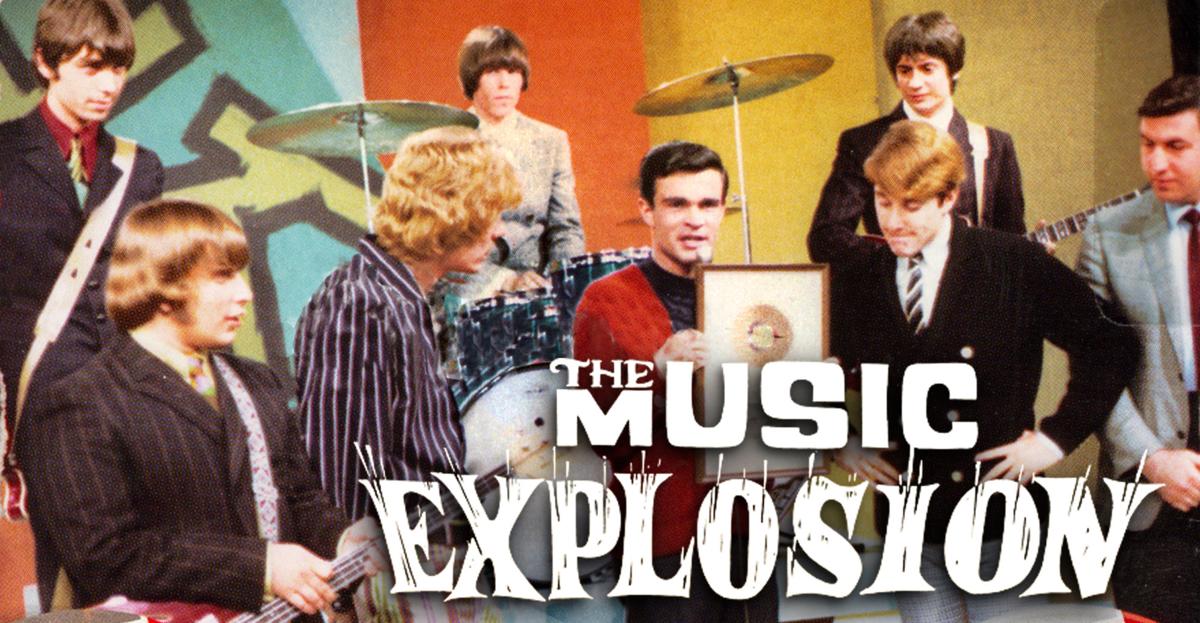 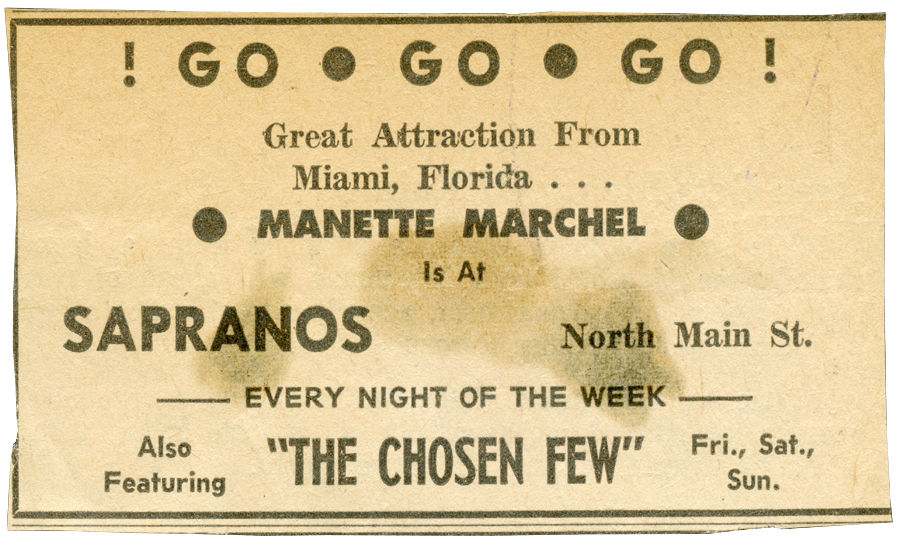 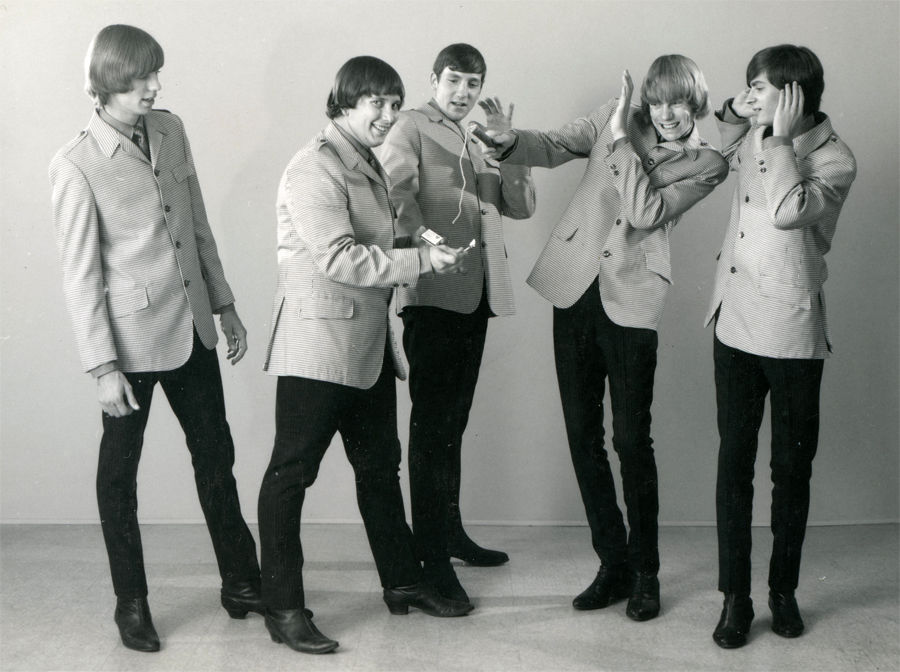 They were all teenagers when their moment arrived in 1967: Tudor Atkins, Burton Stahl, Bobby Avery, Jamie Lyons, Rick Nesta. 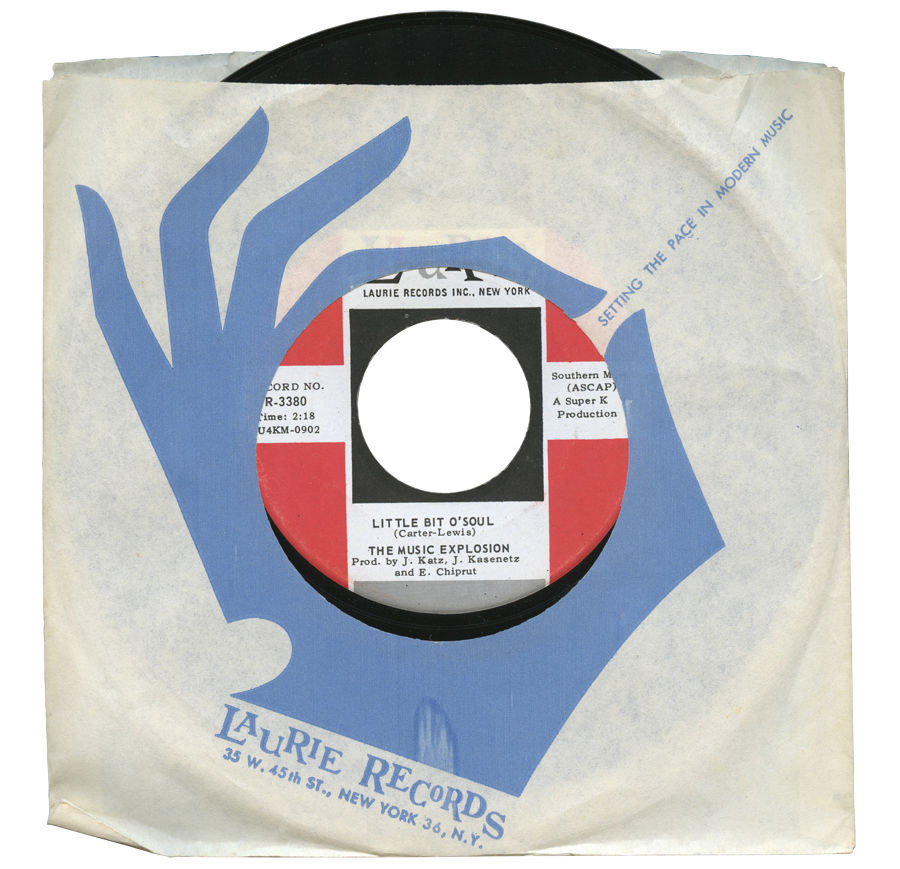 Little Bit O’ Soul was recorded in NYC in September 1966 and hit the top of the charts in July 1967. 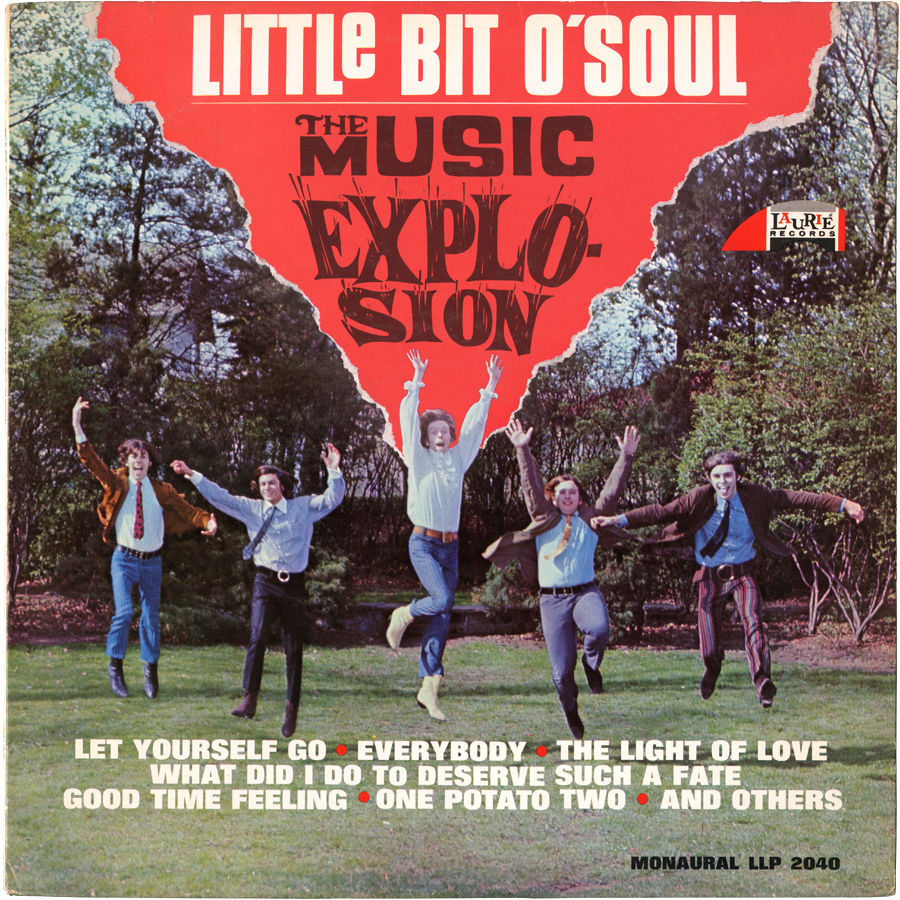 The Music Explosion toured the US in the summer of 1967 in the weeks when their song was in the top 10 across the nation. 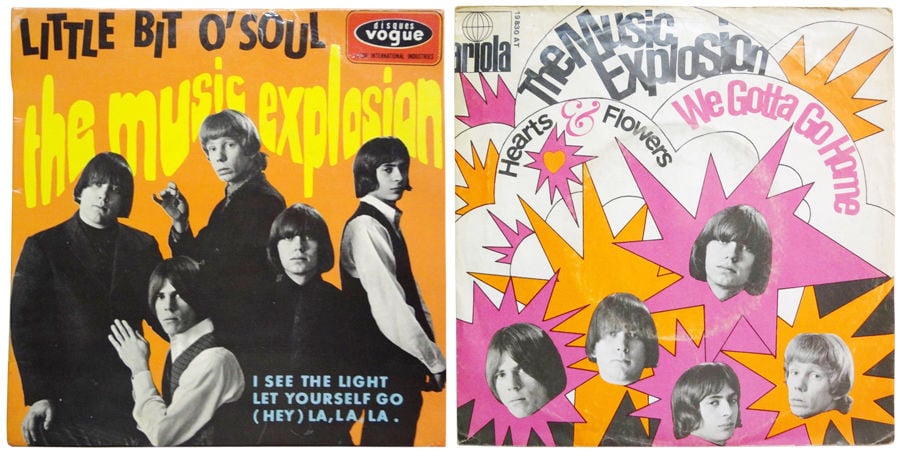 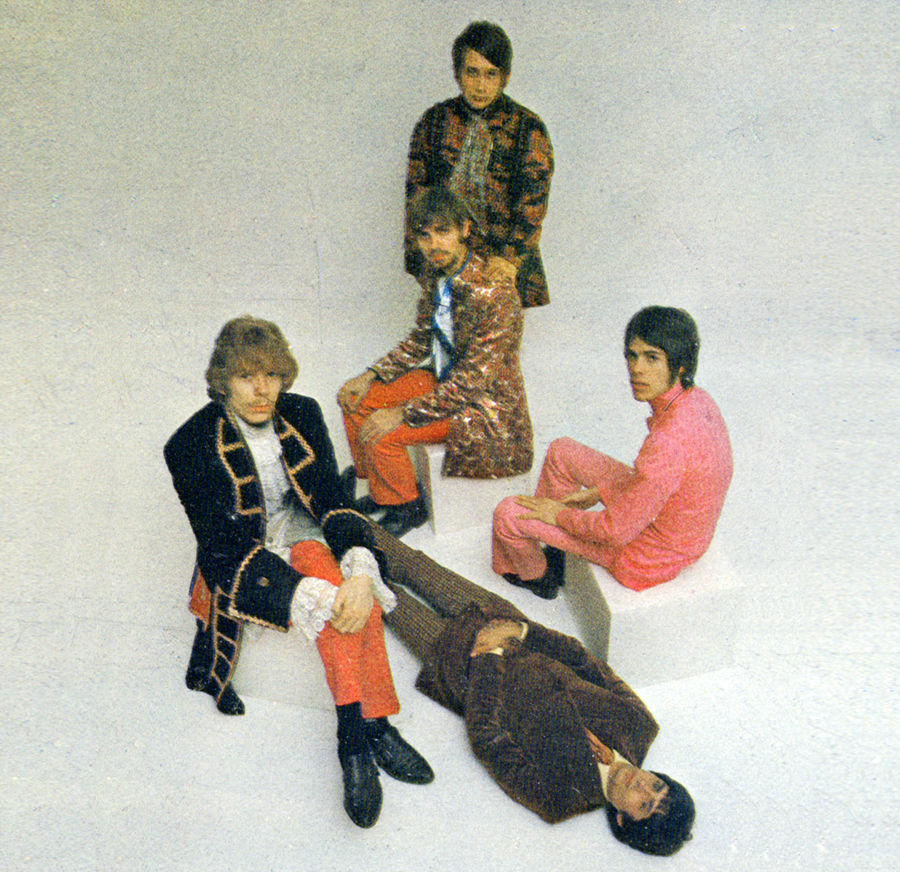 This portrait of the band is from a 1968 album, Kasenetz-Katz Singing Orchestral Circus, created by the producers of The Music Explosion to feature all their top bands in an extravagant performance at Carnegie Hall. 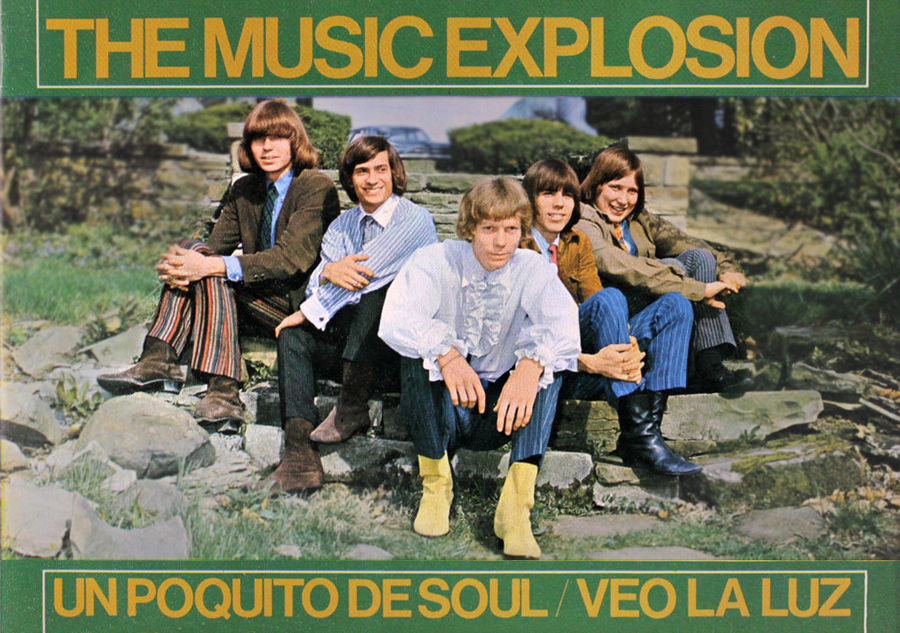 The Music Explosion lasted until 1968 when one of the guys got drafted and went to Viet Nam.

Fittingly, their last performance was staged in Mansfield at the Coliseum.

It was a thrilling spring and summer in 1967 watching the Top 10 music charts across the US as Little Bit O’ Soul rose in big city markets. These clippings show the ratings on July 2, July 13, and August 5 in St. Louis, Chicago and Boston. 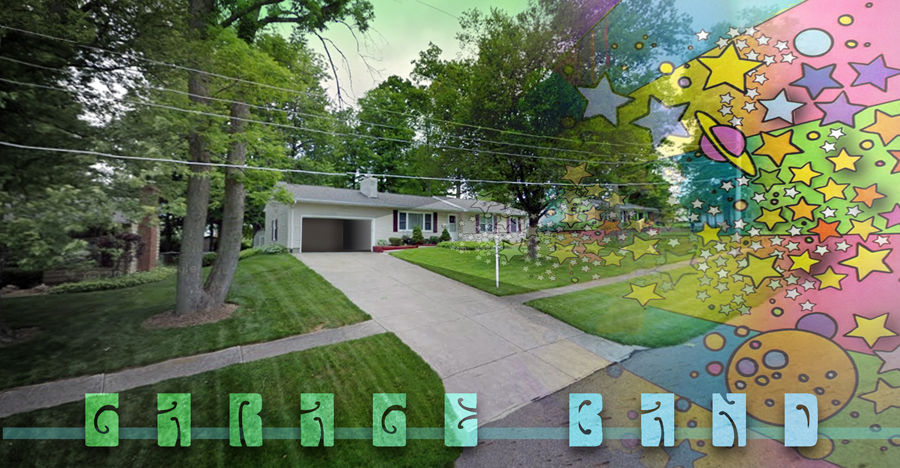 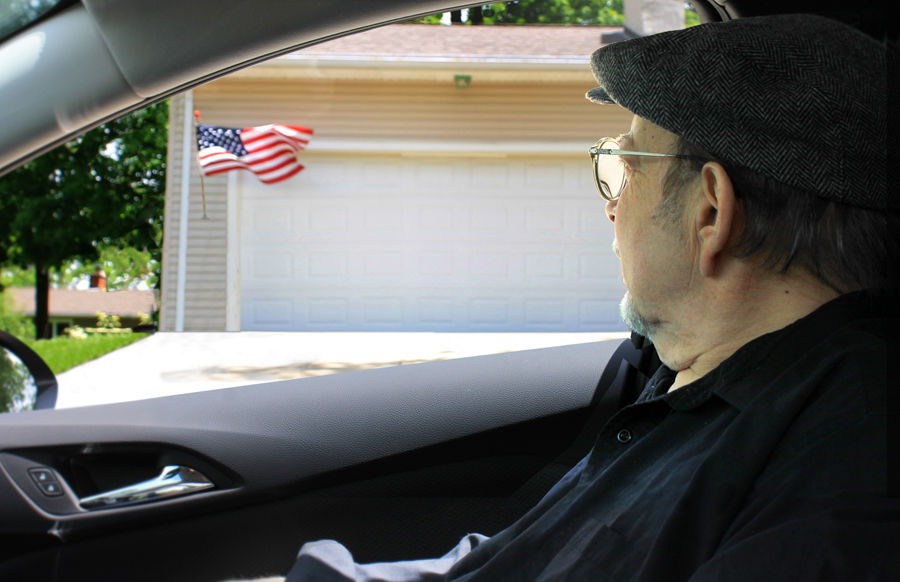 Burton Stahl was the bass player whose unmistakable riff at the beginning of Little Bit O' Soul established the song for all time in American memory.  He accompanied me to identify The Garage where Mansfield's most famous garage band got its start.

It was the Summer of Love, so presumably everybody had a lot of love; but in 1967 everybody in America also had a Little Bit O’ Soul.

That was the year when a few local kids who loved Rock & Roll rose up and took their band out of the garage and into the radios of America with a hit song.

It was an epic year for Rock & Roll, so racing up the charts was no small feat.

The whole nation heard from Mansfield that year with a classic piece of pop culture from a quintessentially American garage band.

Think of garage bands and the first image that comes to mind is irate neighbors. The first clue that Mansfield’s earnest young Rock & Rollers were going to make good was when the neighbors on White Pine Drive snuck into the driveway to listen. The folks next door wanted the garage door open.

These kids were fresh out of high school and proficient enough with their instruments in 1966, but still searching for an identity. They called themselves The Chosen Few.

The band hauled their equipment around the area to places like Grater’s Lake, Grotto Hall, and the YMCA; earning a reputation for solid Rock & Roll during that transitional era when beatniks were turning into hippies.

The band had a gig every week on North Main Street, at the dance joint next to Saprano’s called Jeepers-A-Go-Go, where they had the opportunity to get used to having an enthusiastic crowd at their feet.

Nothing on North Main in 1966 however, could have prepared them for where they were going in 1967. When they walked out on stage at a Chippewa Lake Park music festival in front of 20,000 fans, the crowd screamed loud enough to stop them in their tracks.

It happened on the day in July when Little Bit O’ Soul hit #1 in Cleveland. Ohio fans were blown away when The Music Explosion showed up on their stage.

And the five guys, whose 16-month journey took them from The Chosen Few in a Mansfield garage to the Music Explosion on the national stage: they were just as amazed as the crowd.

Little Bit O’Soul was written and recorded in England, and didn’t make much of an impression in the US when it first arrived here.

It was one of the songs handed to the Mansfield band when they were signed by New York producers in 1966. “Here, see what you can do with this.”

Mulling it over and toying with the tune, The Music Explosion wanted to liven up the tempo and give it a more unique sound.

It only took a few minutes of creative genius to translate the dreamy English version into a shape and resonance that became quite American and wholly unforgettable.

It is those first four notes that identifies it; then a drum beat, and then the next four.

It became an absolutely iconic soundbite that is known the world over in the annals of Rock & Roll history. Sing the first four to anyone who listened to the radio after 1967 and they can sing the next four back to you.

It sounds like the 60s. Even kids born in the last five decades recognize that riff; ask them and they’ll tell you: they consider it foundational Rock & Roll.

The band of kids who represented Mansfield in the national spotlight was composed of a variety of neighborhood backgrounds, just the way our community is composed: there was a guy who graduated from Malabar High School; one from St. Peter’s; one from Lexington; one from Galion; and one who moved here from out of state.

As The Chosen Few, these boys were making a splash locally. But their big break came in 1966 when their manager took them to New York City to meet a couple of emerging young producers scouting for new talent.

The producers, Kasenetz and Katz, came to be known in the business as ‘Super K’ because they managed to put together the right bands with the right songs and the right radio stations to get hit after hit on the Billboard charts.

K&K had an indefinable music business savvy that was hard to dispute. When they looked at the kids from Mansfield they knew the band had the sound, the energy, the passion, the groove. What they didn’t have was a marketable name. Early on they said The Chosen Few had to go.

The inspiration for what came next was just as spontaneous and serendipitous as their whole miraculous rise to fame: it happened all of a sudden and came out of nowhere.

They were all riding across NYC in a car heading from one place to another, and the radio was cranked. When the disc jockey made his station identification pause between songs what he said was, “This is WMCA, your music explosion station.”

Katz turned to the band and said, “That’s it! That’s your name. From now on you’re The Music Explosion.”

The band was in New York City when Little Bit O’ Soul hit #1 on the NYC charts. The song peaked on Billboard’s Hot 100 single chart at #2 on July 8, 1967, and remained on Billboard’s Top 10 throughout the summer.

Looking at the charts of 1967 today the song ranks at #11 overall for the year. What was ahead of it? The Doors with Light my Fire. The Monkees' with I'm a Believer. What is amazing is what ranks below it on the list: Aretha Franklin's signature anthem Respect, and Stevie Wonder with I Was Made to Love Her.

In 1967 the Recording Industry Association of America certified that Little Bit O’ Soul had made $1 million, so the band and their producers were presented a gold record on the Cleveland music show Upbeat. To date it has sold 3.9 million copies.

But sales are merely a concrete calculation: mathematical, controlled. There is an entirely different element of popularity that cannot be measured in cash.

The band certainly didn’t reap a lot of money for their hard work … most of the profits belonged to the investors: producers, promoters, handlers, agents.

The intangible aspect of Little Bit O’ Soul is ethereal as audio waves coming from the radio: vibrations that cannot be seen. The vibes pass through the atmosphere from speakers to kids playing at the pool; to mothers shopping in the grocery; to anyone in a car going anywhere with the radio on.

Most of those people didn’t buy the record. All of them were shaped by the beat; all of them were placed into a context of the Summer of Love: “You need a little bit o’ soul to put you right.”

All of them had a soundtrack for the '60s that was shaped by a ragged bunch of kids from Mansfield who set up their microphones and amps in a garage on White Pine.

What it represented to Mansfield is hard to capture in words. The city stepped up in pride at that moment in time: WMAN had a Music Explosion day when the song was certified as a gold record, and the Mayor presented the Key to the City to each of the musicians and hosted a tribute dinner at the Blue Dolphin.

To kids in Mansfield it represented something incredibly powerful: the new certainty that dreams can come true. That Mansfield is on the map. That a kid from here can speak to the nation, to the world. That Mansfield has a voice, and it is a powerful voice that can be heard on radios everywhere.

Watch them on American Bandstand.

I was researching The Music Explosion and kept reading everywhere that they were considered the absolute epitome of an American garage band.  It made me wonder, was there a garage?

So I called Burton Stahl.