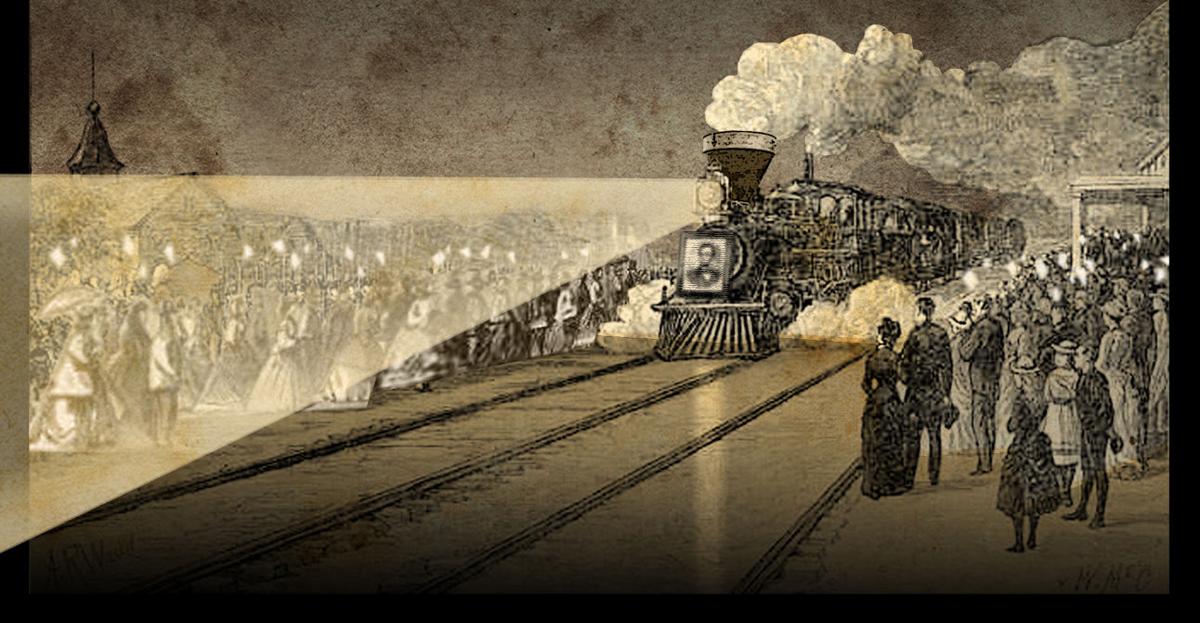 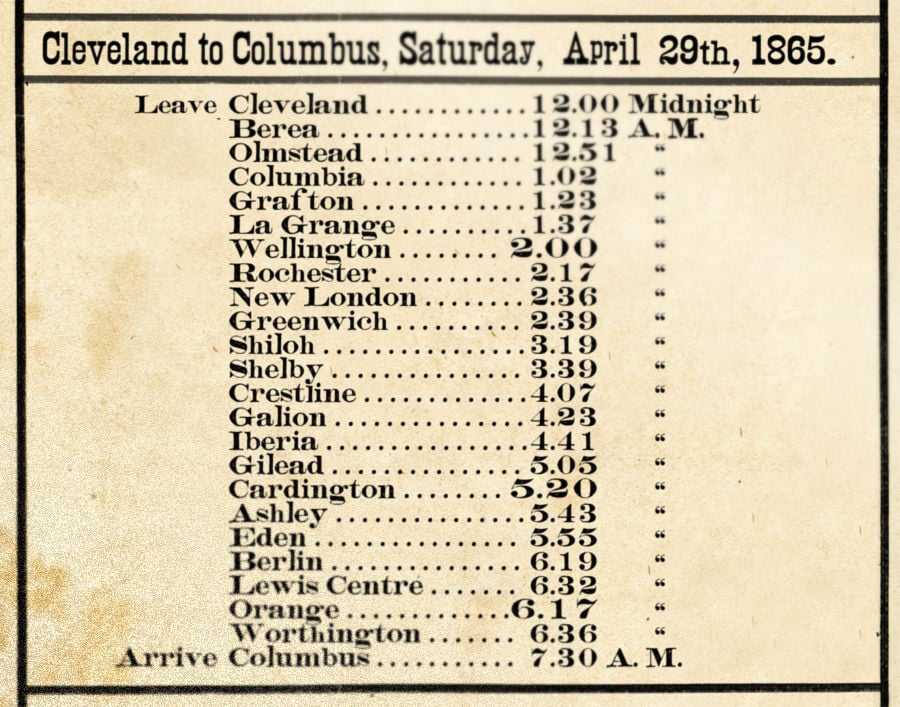 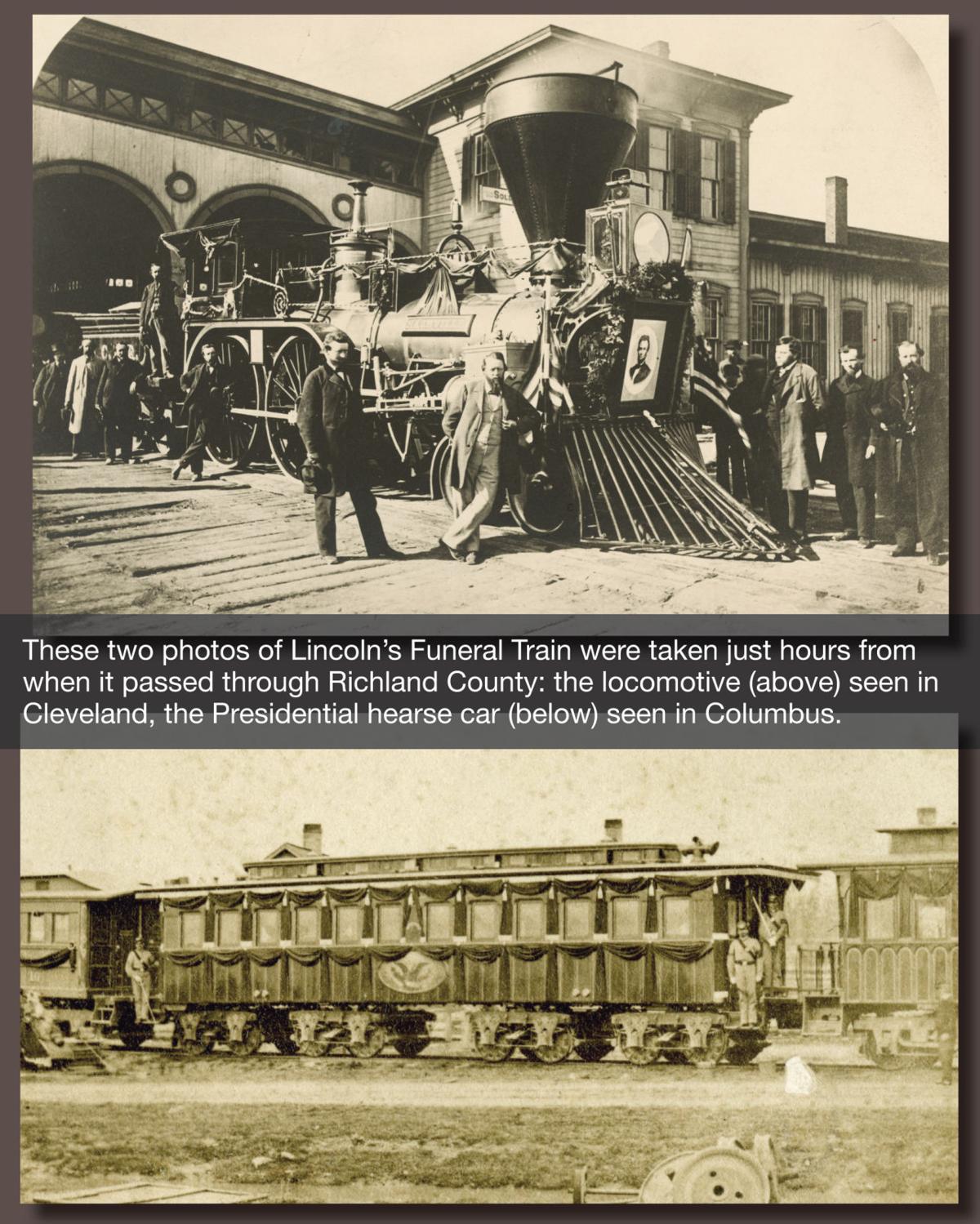 Two photos of the train within hours of its Richland visit. 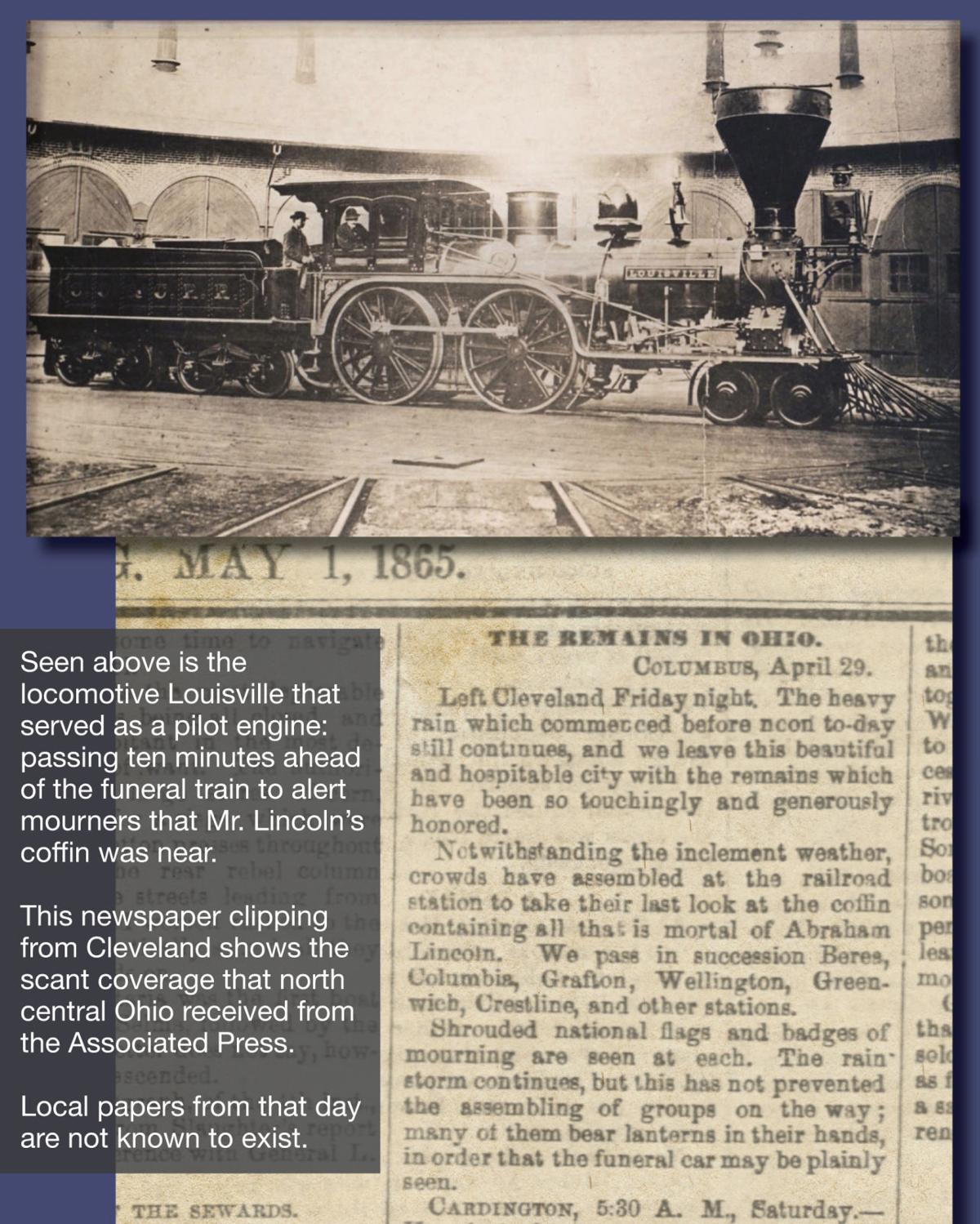 A clipping of the AP coverage between Cleveland and Columbus. 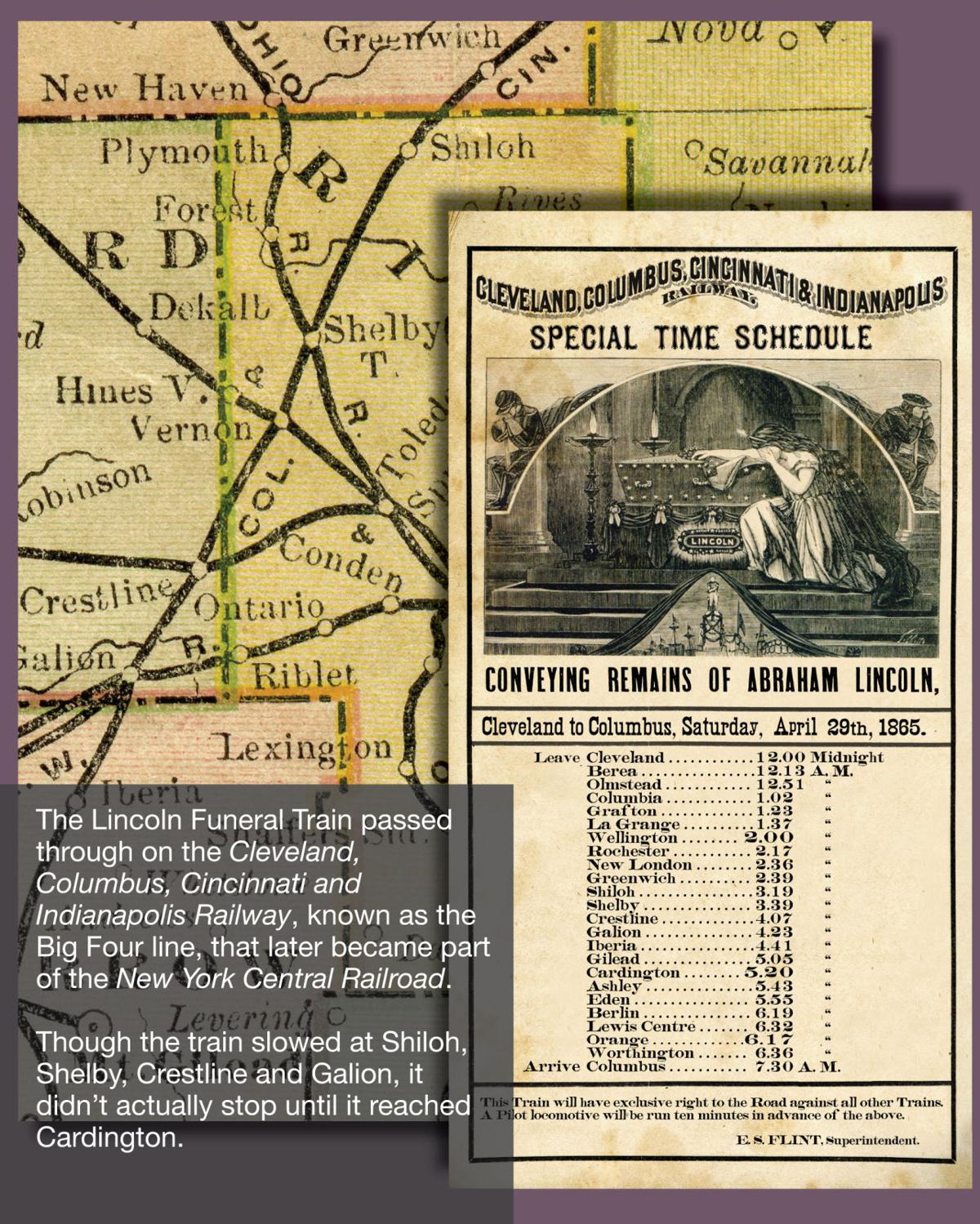 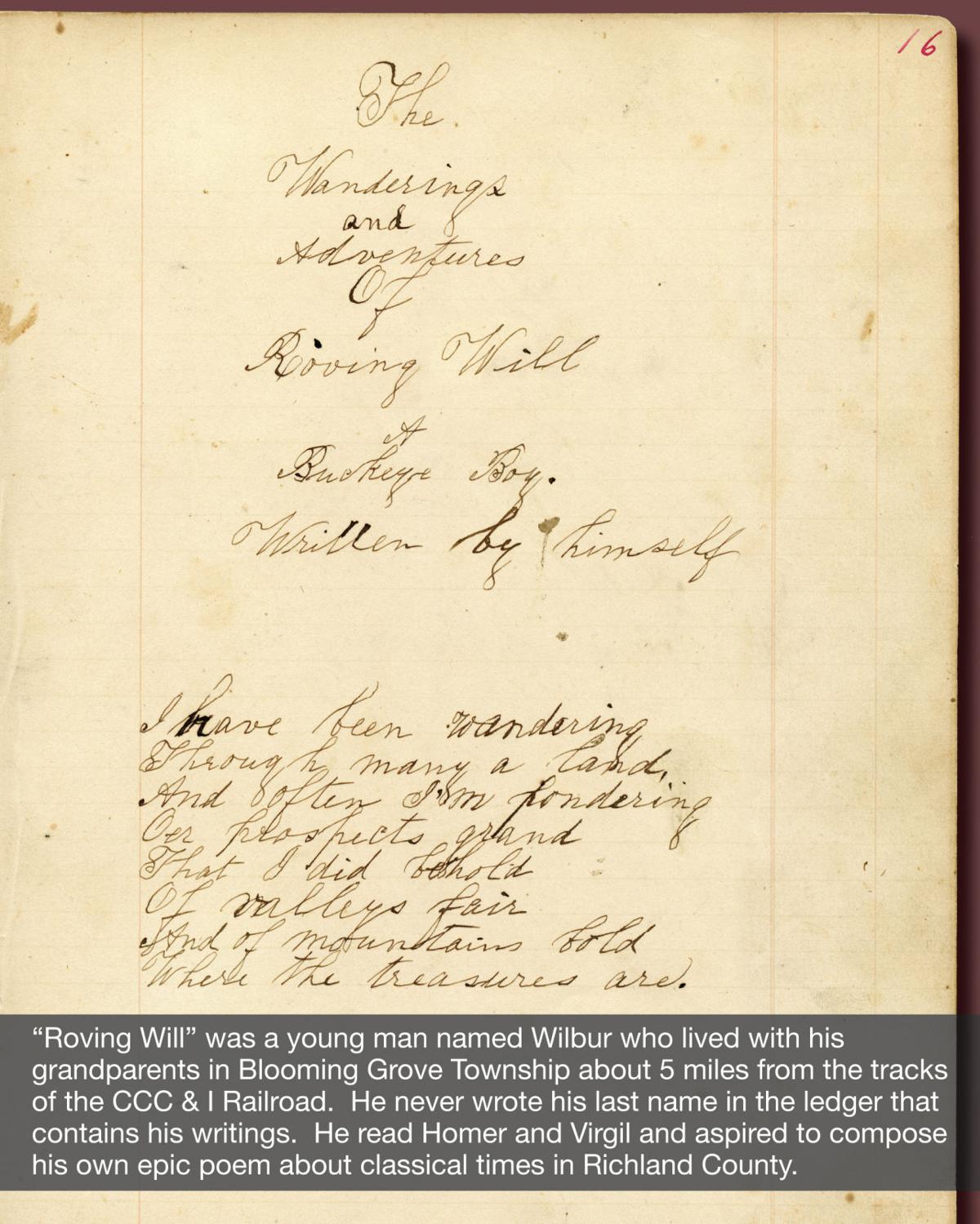 A title page of the journal where young Wilbur of Richland County wrote his poems. 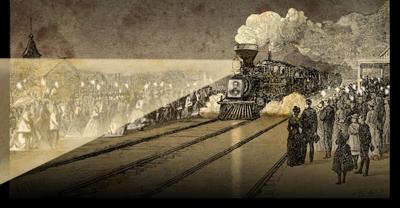 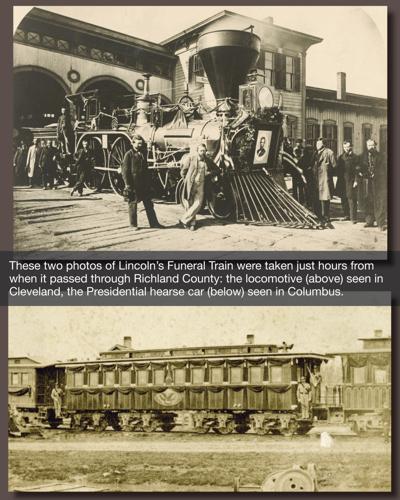 Two photos of the train within hours of its Richland visit.

A clipping of the AP coverage between Cleveland and Columbus.

A title page of the journal where young Wilbur of Richland County wrote his poems.

In April of 1865 two hugely transformative events took place in the United States: on April 9 the four deadly years of Civil War finally came to an end; and only a few days later on April 15 President Lincoln was suddenly killed.

Such a rapid reversal of emotions — from a joyful sigh of relief to a horrified gasp of unaccountable loss — left the whole nation reeling and breathless.

In the weeks that followed there were many evocative events that helped the country come to terms with the tragedy: historic ceremonies, rituals and obsequies that Americans alive at the time would never forget for the rest of their lives.

Folks in our area, however, had the opportunity to participate in the grieving in a way that was particularly heart-searing and personal — because the train that took Lincoln home for the last time from Washington D.C. to Springfield, Illinois passed right through Richland County.

There are no accounts of the event recorded in the county histories or the local papers, but there was one young man present at the railroad tracks that night outside of Shiloh who was so moved by the experience he tried to capture his emotions in a poem of mourning.

Abraham Lincoln’s funeral was held in the nation's capital on Wednesday, April 19. Afterward, his coffin took the long journey home in 13 days, across 1,700 miles, through 440 cities, towns and villages.

Millions of people in eight states, including Ohio, witnessed the funeral procession. Some estimates claim as many as a quarter of the population of the United States were witness to the train.

At the major cities and state capitals along the way, Lincoln was removed from the train to lie in state, but most of the people who saw his cortege did so on horseback, in carriages, on foot from fields and villages as the train passed slowly through the countryside.

The train was nine cars long and the specially designed Presidential car was at the tail end with only the caboose trailing it. A designated pilot locomotive rode out 10 minutes in front of the funeral train to survey the tracks, and to serve as notice to folks that the President’s coffin was imminent.

A schedule of times was published of when the train would reach each station along the way so people could know when to be there, and the train moved at a solemn pace of only 5 mph so their final moments could last as long as possible.

The train spent Friday in Cleveland, and when it departed at midnight through the north central Ohio countryside it was Saturday, April 29. It rained most of the night — often pouring rain — yet the normally deserted byways of rural farmland between Cleveland and Columbus were lit the entire way by thousands of lanterns, torches and bonfires.

The CCC&I RR stations at Shiloh, Shelby, Crestline and Galion were all draped in black mourning trim, with bonfires nearby for hundreds of the gathered neighbors. Church bells tolled a funeral knell as soon as the train was sighted, and those who could find a voice among the tears quietly sang hymns.

A witness at the event noted in his ledger that even though the rain was pelting great buckets when the train appeared, everyone — men and women — removed their hats as the President passed.

Young Wilbur was standing in a hayfield a few miles down the tracks from Shiloh. He walked there through the fencerows from his grandfather’s farm five miles away, to stand in the middle of the night with a small army of neighbors who all were similarly drawn like moths to the flame.

Wilbur kept a leather-bound ledger, and among his various financial records, recipes for glue, horse remedies and weather reports, he scrawled poetry and ideas for poems.

The completed works were all signed Will, but he never signed his last name anywhere in the book. On every other page he commented that his poems were worthless. But poetry is supposed to take the raw material of language and shape it into a vessel that can contain an emotion, so that when someone opens the container by reading the words the emotion pours out again.

By that standard, his notes constitute profound poetry. Of that mournful April night in 1865 he had much to say, and these are his words, somewhat edited and arranged:

“I ache to write a poem around that black night, but I apprehend that the night itself was poetry — it was a living poem.

"It was my own feelings written longhand into cold rain. It was my darkest depth, my deepest heaving sobs, it was the drenching tears the ominous heavens all lifted out of my heart; and my thoughts substantiated large, beating down onto the hard land.

"Even the train, moving into our stormy presence — seen from far off, then too soon and for a moment illuminating the chaos, making sense of the darkness, giving order to the fearful black with a kind of cheer, a warm friendly light, a center around which all our hope could unite…

"Then it passed. So quickly dark again, so awfully over and done while the soaking cold rain wept and wept in the empty night.”

With pain like that, with horror and helplessness, and an abyss of loss, Will’s notes go on to say he couldn’t imagine how life could continue.

Though they had saved the Union and won the war, it seemed like everyone had lost the momentum to go on. He was not certain if a patient could recover from such severe trauma and brutal heartbreak.

Yet here I am writing about it more than 150 years later. History is the proof of our resilience. The act of history, the fact of having a present from which to look at the past: that is the hope that life does go on, always.

There is more information about the Lincoln funeral train in Richland County on the graphics and photos accompanying this article.  To see them in a gallery just click on any picture.