CENTERBURG -- The evening of Monday, Dec. 18, 1911, Hilliar Township constable Samuel Gould was upset about something at the Foster house in Centerburg, standing in front of the house making a scene.

Neighbors called the police and Marshal L. B. Evans arrested the constable for the noisy fracas, despite the interference of Charles Foster, who lived at the house with his brother Clarence and their parents. 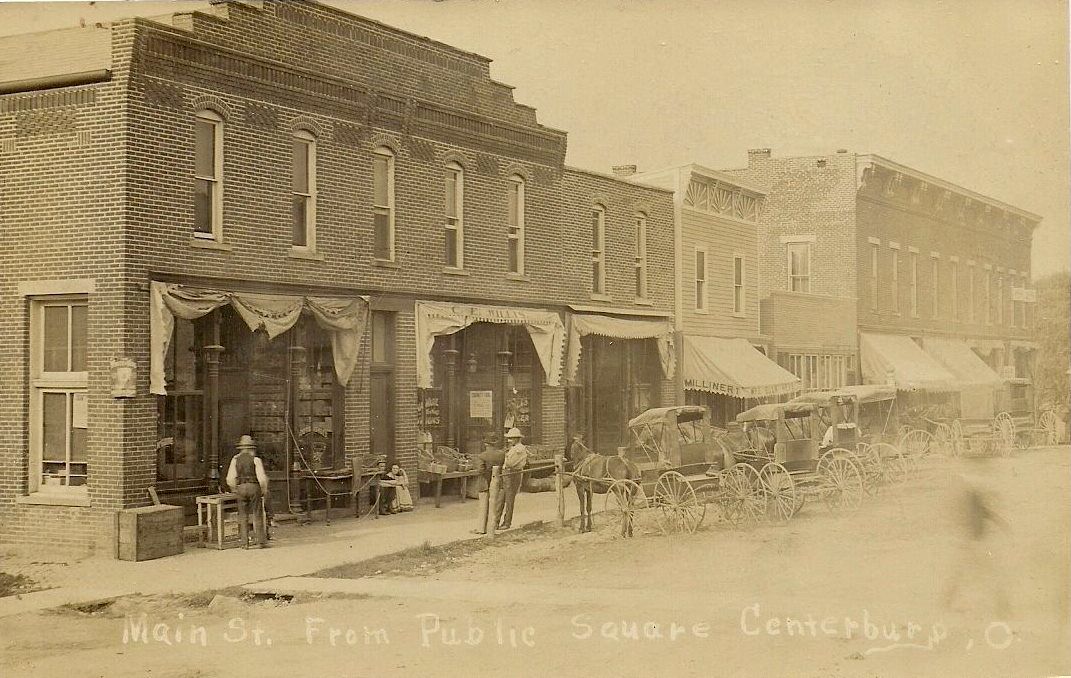 The burning of the corner E. E. McGuire Store in December of 1911 was the event that finally blew the case wide open. Though the Fosters were imprisoned, they resumed criminal activities after being released from prison. 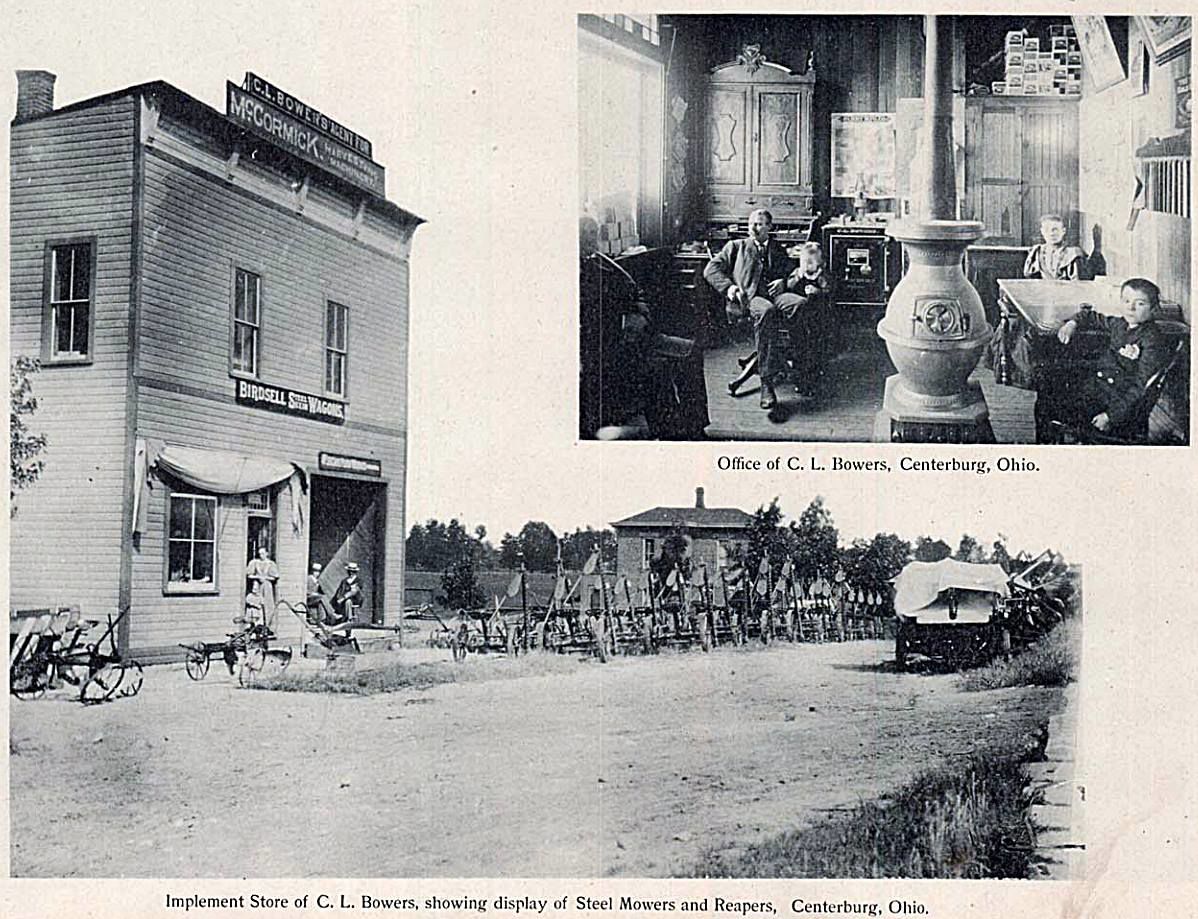 The C. L. Bowers Implement Store burned down on December 11, 1909. Was it targeted by the Foster Gang as well? 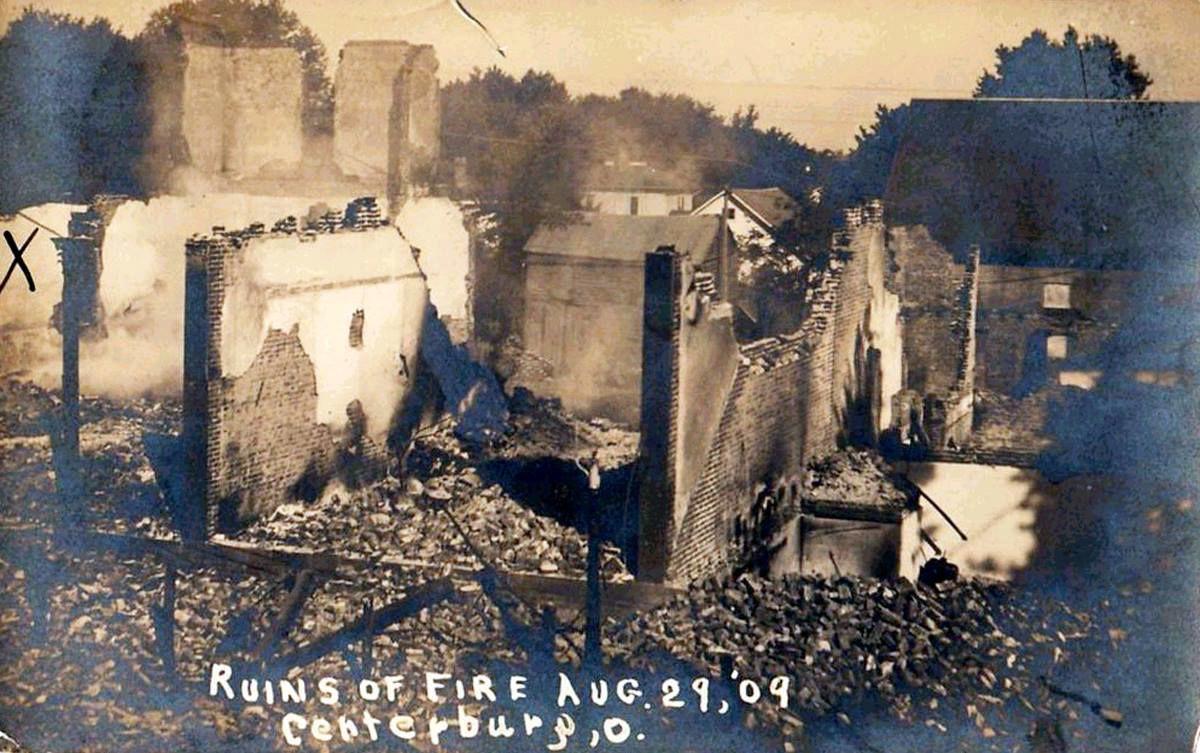 The massive Aug. 29, 1909 fire was in danger of burning down the entire village before firefighters halted the blaze with the help of a citizens' bucket brigade. 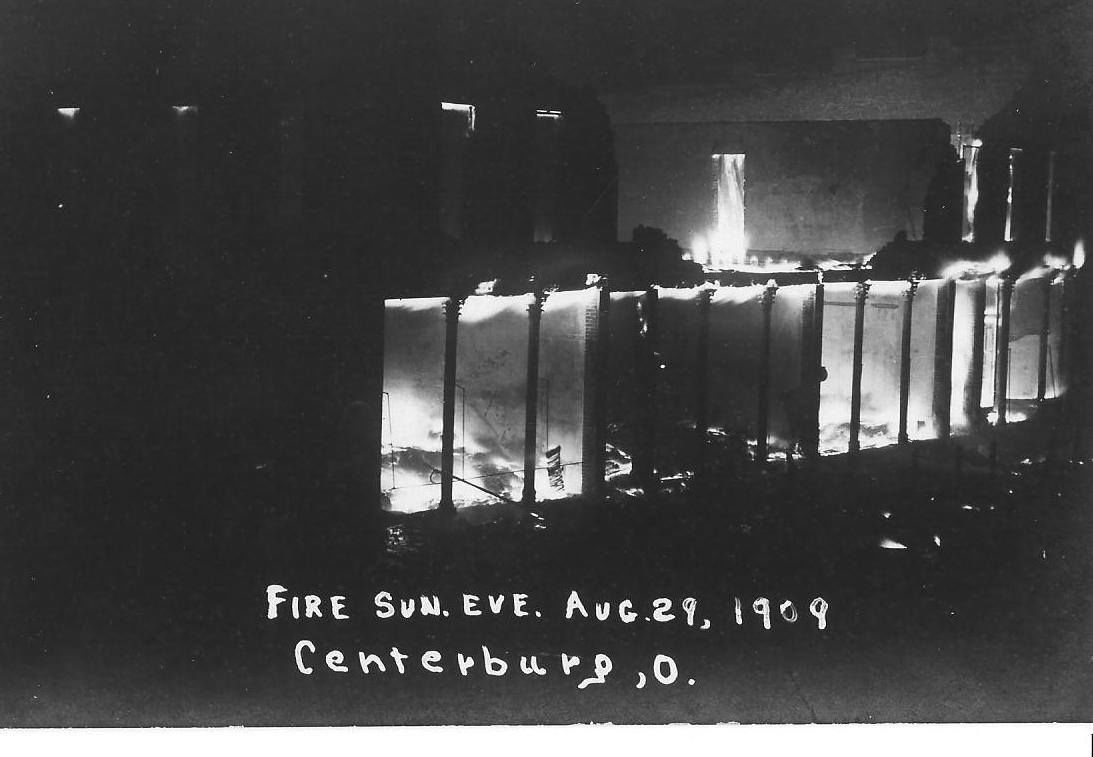 A major fire destroyed half the buildings on the square in downtown Centerburg on Aug. 29, 1909. Blamed on a flicked cigarette at the time, it may actually have been the work of the Foster Gang, a group of burglars working in the area, who covered up their thefts with arson. 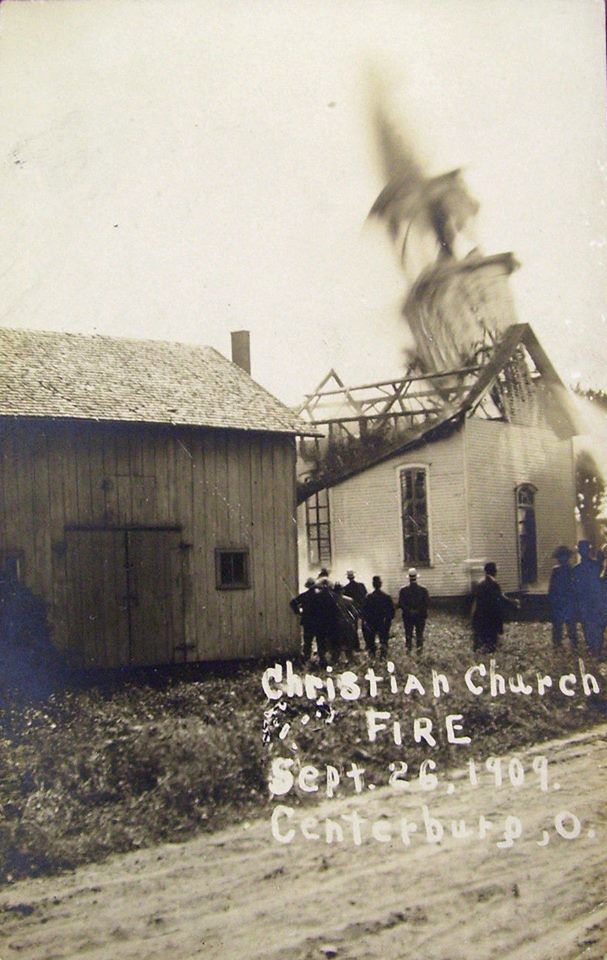 The burning of the corner E. E. McGuire Store in December of 1911 was the event that finally blew the case wide open. Though the Fosters were imprisoned, they resumed criminal activities after being released from prison.

The C. L. Bowers Implement Store burned down on December 11, 1909. Was it targeted by the Foster Gang as well?

The massive Aug. 29, 1909 fire was in danger of burning down the entire village before firefighters halted the blaze with the help of a citizens' bucket brigade.

A major fire destroyed half the buildings on the square in downtown Centerburg on Aug. 29, 1909. Blamed on a flicked cigarette at the time, it may actually have been the work of the Foster Gang, a group of burglars working in the area, who covered up their thefts with arson.

According to news reports from the Democratic Banner and other regional newspapers, the marshal was annoyed at the interference and decided that after depositing Gould in a cell at the police station,he was going to go back and arrest Charles Foster, too. When he did so, brother Clarence tried to stop him as well.

After both brothers were deposited behind bars, Evans got reinforcements to go back to the Foster home with him and search for contraband liquor, considering that all three men were considerably drunk at the time of arrest.

The young men's father, Frank Foster, a Centerburg carpenter, was not helpful, so the police arrested him, too.

When they looked through the house, the police were astonished that instead of finding “wet goods,” they found a large stash of dry goods, including clothing and household implements. Not only did the items match the stock that had been burglarized from the Edward McGuire store in downtown Centerburg (which the thieves had then attempted to burn down), they even still had McGuire's price tags on them.

Based on suspicions and tips, the police brought in a friend of the Fosters, Glenn Selby, a tetchy 18-year-old known for his volatile temper. Under extreme interrogation, Selby broke and confessed that they were all part of a burglary ring, responsible for a rash of thefts and arson incidents in the Centerburg area.

The crime wave had begun as early as 1906, when two barns were torched on George Crisman's farm near Centerburg, resulting in the total loss of both structures, all of the farm equipment, oats, and corn inside the barns, and the death of three horses and four mules, none of which were insured.

The arson incidents accelerated in the next few years, with 1909 seeing a rash of major fires, including one on Sunday, Aug. 29, that firefighters thought might level the town. After fighting it all evening, they were able to get the fire under control by 2:30 a.m. with the help of a chemical engine, a hand-pump tanker, and a citizens' bucket brigade.

That fire destroyed half of the buildings on the square in Centerburg, including Miller & Tuttle's Dry Goods, Elmer Utlack's hardware store, Dr. A. W. Brown's dentistry office, and the Oddfellow's Lodge, which included the office of the City Telephone Exchange, which had moved there after a previous fire destroyed its office on the other side of the square.

At the end of September, an unknown photographer caught a dramatic picture of the collapse of the steeple of the Centerburg Christian Church as it burned down one Sunday morning during a service. It was thought that the church fire was caused by a spark from a heating stove, but considering the rash of other burnings, one has to wonder.

On Dec. 11, 1909, C. L. Bowers Implement Store burned down, prompting the Coshocton Tribune to comment, “Centerburg for several years has had frequent and disastrous fires.”

With the arrest of the Fosters, Gould, and Selby, a criminal operation was exposed. It isn't clear whether or not the earlier fires masked burglaries, but the later crimes did. If the church fire was indeed part of the gang's activity, it suggests a malicious streak. Fortunately, a neighbor to the church noticed the fire and alerted the congregation, preventing any deaths or injuries.

Sheriff Peter J. Parker took the suspects to the county jail in Mount Vernon until they could be tried in early 1912.

Selby pled guilty and was given a term at the Ohio State Reformatory in Mansfield. Charles Foster was found guilty of burglary and grand larceny, and sentenced to 12 years in the Ohio Penitentiary in Columbus. Clarence Foster was found not guilty of burglary and guilty of only assisting his brother in selling the stolen merchandise, and sentenced to three years in the state penitentiary.

Having achieved convictions on those charges, the authorities evidently decided not to pursue further charges against the gang. Samuel Gould was evidently found not guilty, for he soon resumed normal life in the area.

Glen Selby returned to Centerburg after his sentence was finished, as did Clarence Foster. Charles Foster was paroled after only four years, and was soon involved in new criminal activities. Akron police contacted Centerburg officials in March of 1916 on suspicion of the brothers' involvement in a burglary in that city.

Police formed a posse to apprehend Charles, but he got wind of the plan and immediately fled town, walking east on the Pennsylvania Railroad. About three miles outside Centerburg, the posse caught up with Charles and demanded he stop. Foster claimed he had a gun, but the leaders of the posse decided he was bluffing and tackled him.

Another posse formed to take in Clarence, who was joined in flight by Glen Selby. Their arrest was considerably more difficult, as both men fought violently with the posse and threatened to kill them. When Charles Foster heard about that arrest, he told the marshal, “It's a good thing Selby didn't have a gun this afternoon. That guy hasn't any sense at all. He'd shoot anybody.”

Indeed, discussion was rampant that Selby might be sent away to the state asylum in Lima, with his own grandmother, Mrs. William Huffman, stating that the young man was mentally unbalanced and that he makes “continuous threats against almost everybody he knows.”

Dr. Phillips of Centerburg opined that Selby should not be allowed to roam the streets. Whatever happened (and newspaper reports say nothing), Selby disappears from public record until he re-emeges in the late 1930s and early 1940s, living in the state of New York, where he lives out the remainder of his life quietly.

Charles Foster went back to the Ohio Penitentiary. Released again a few years later, he and his father were at the center of a new burglary scandal in 1920, where they were once again accused of breaking into Centerburg shops. Charles returned to the state penitentiary this time.