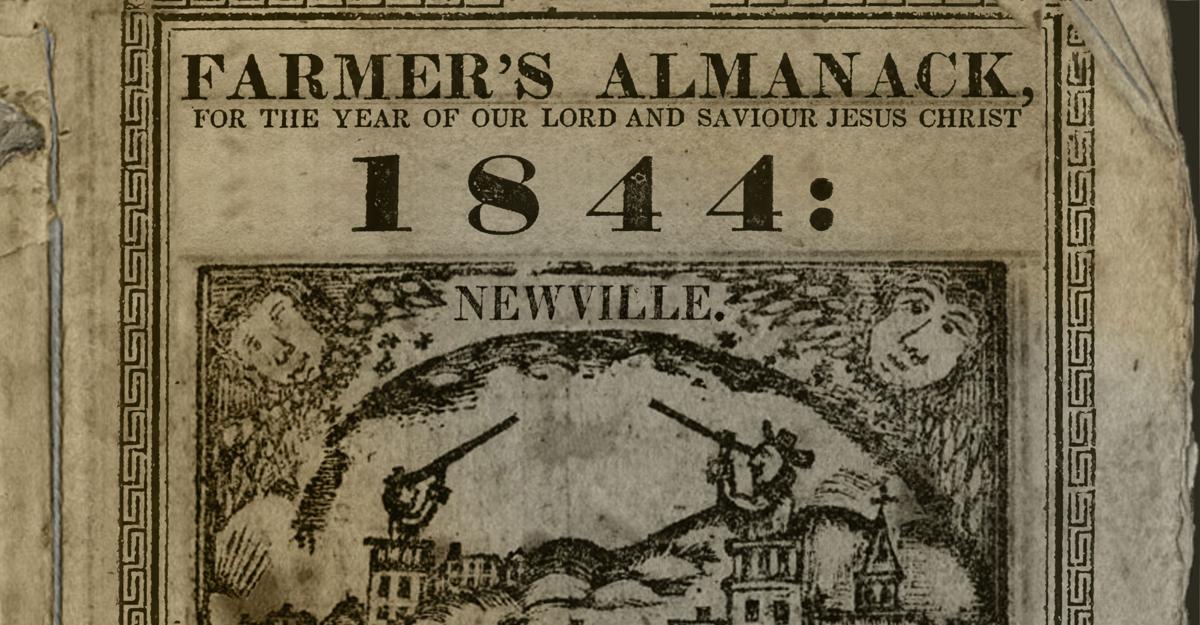 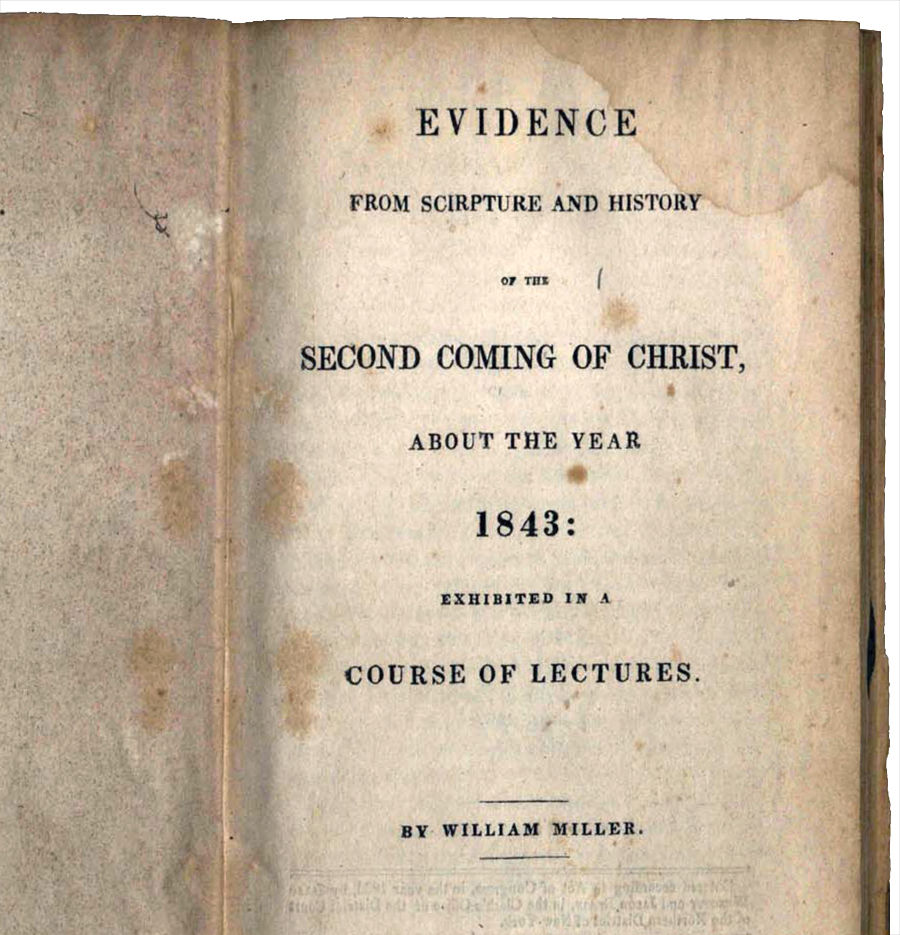 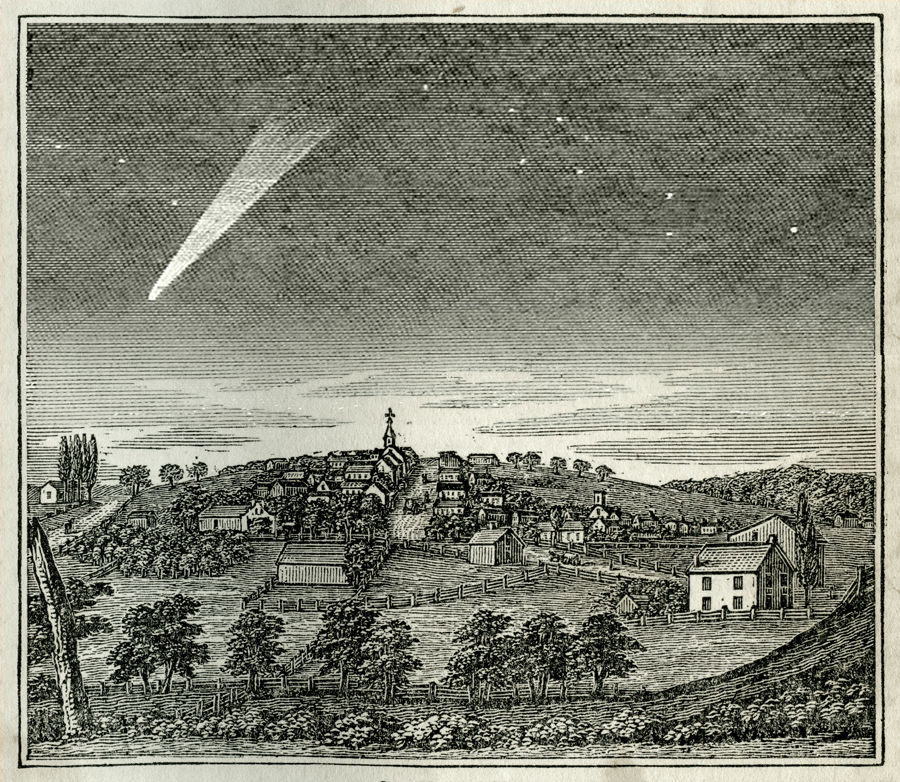 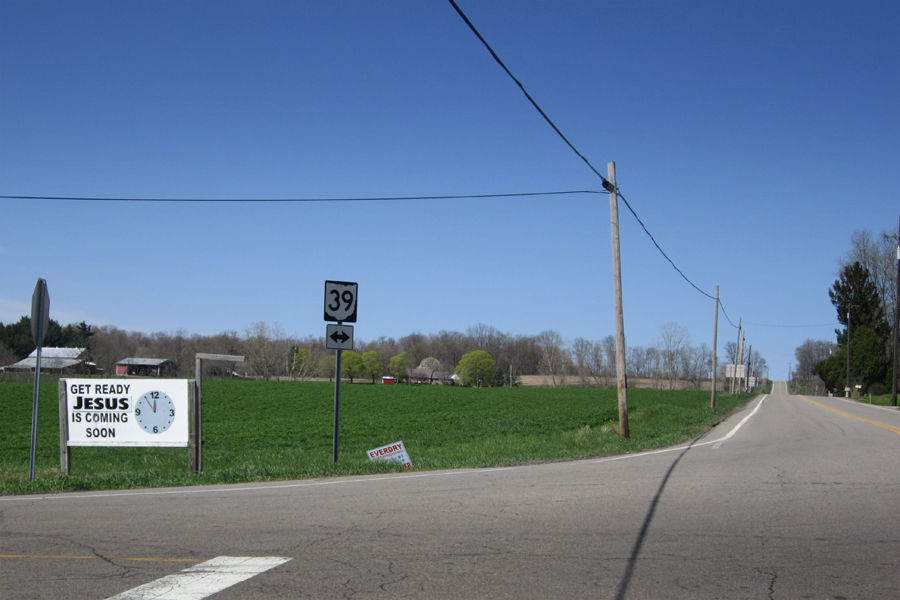 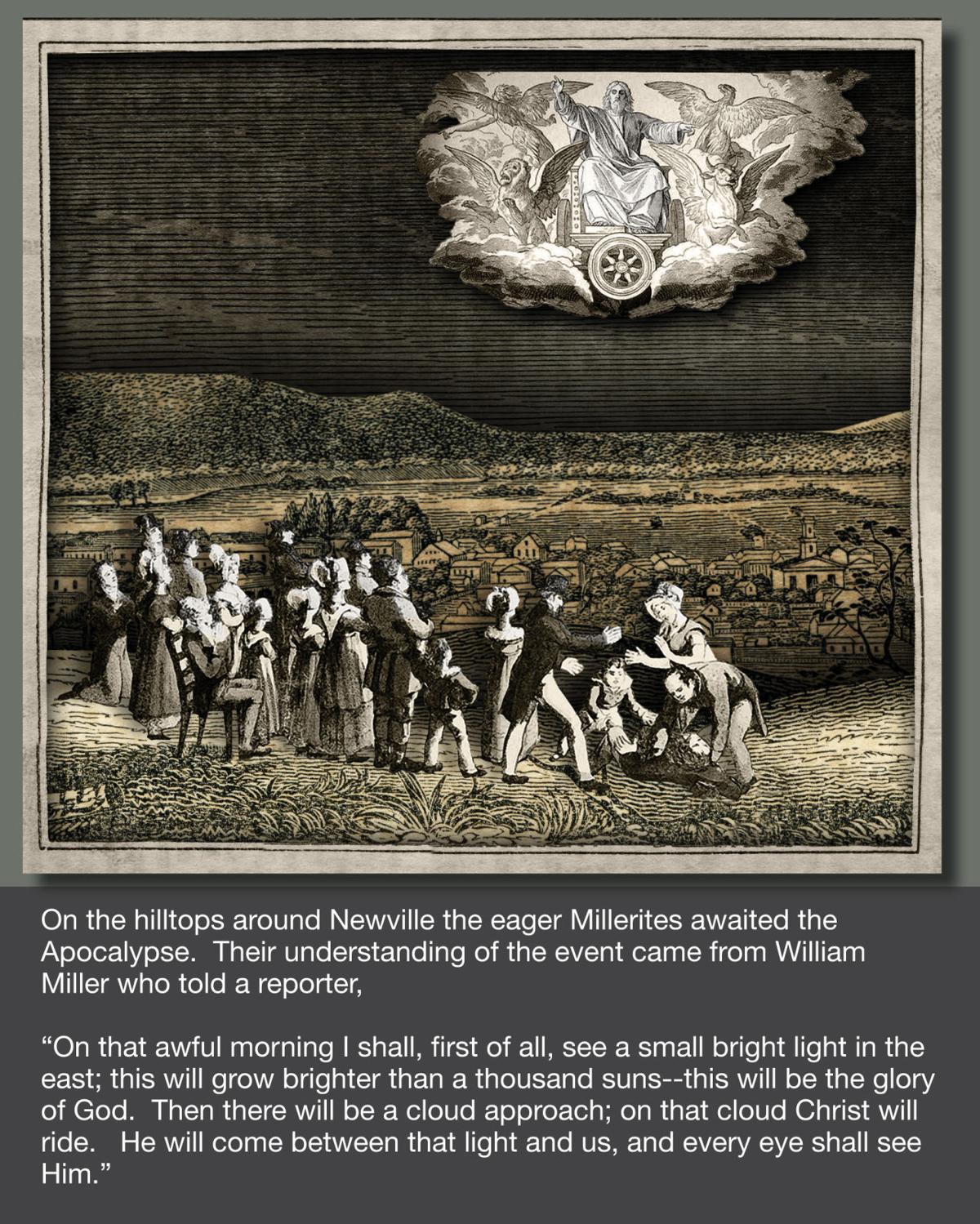 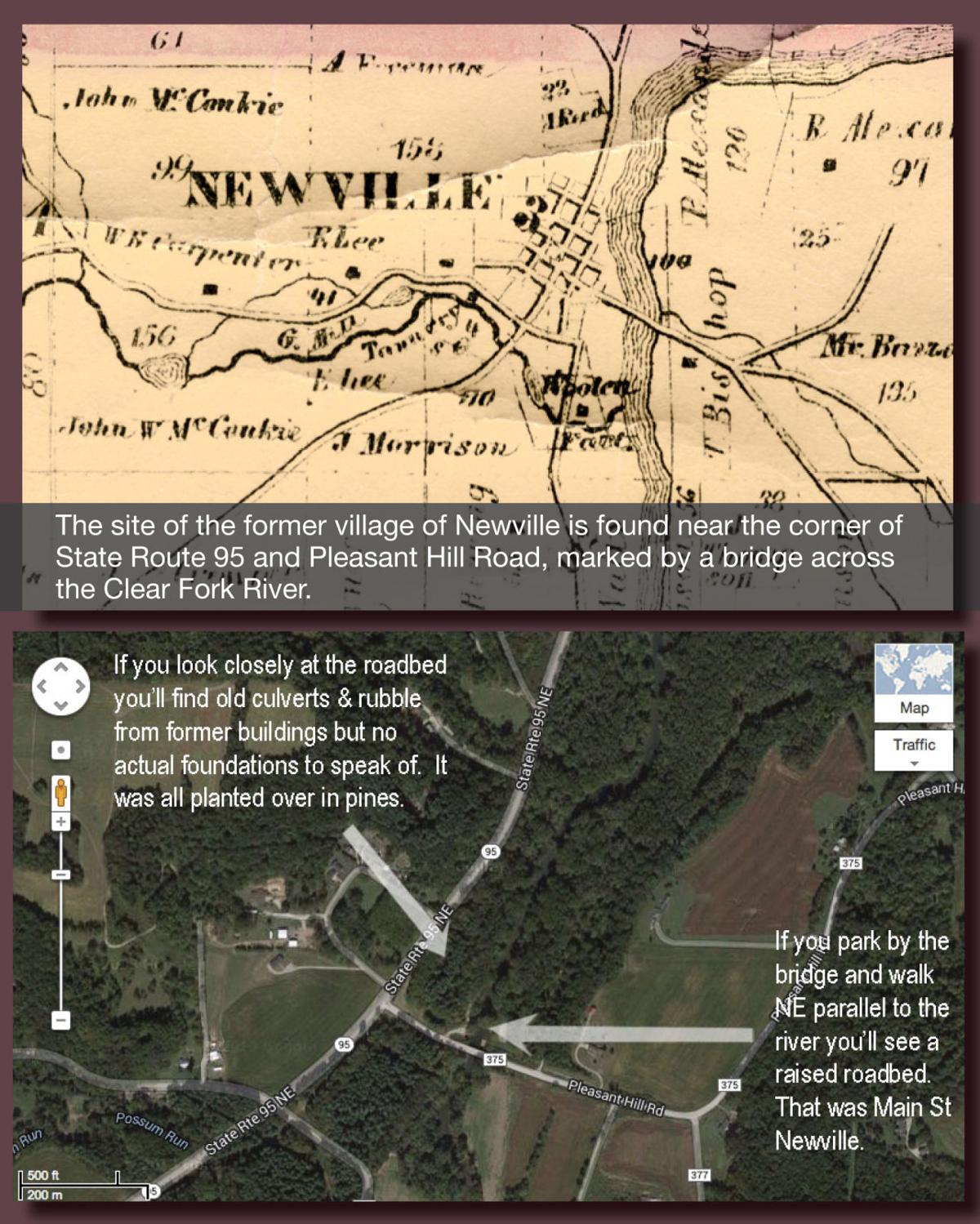 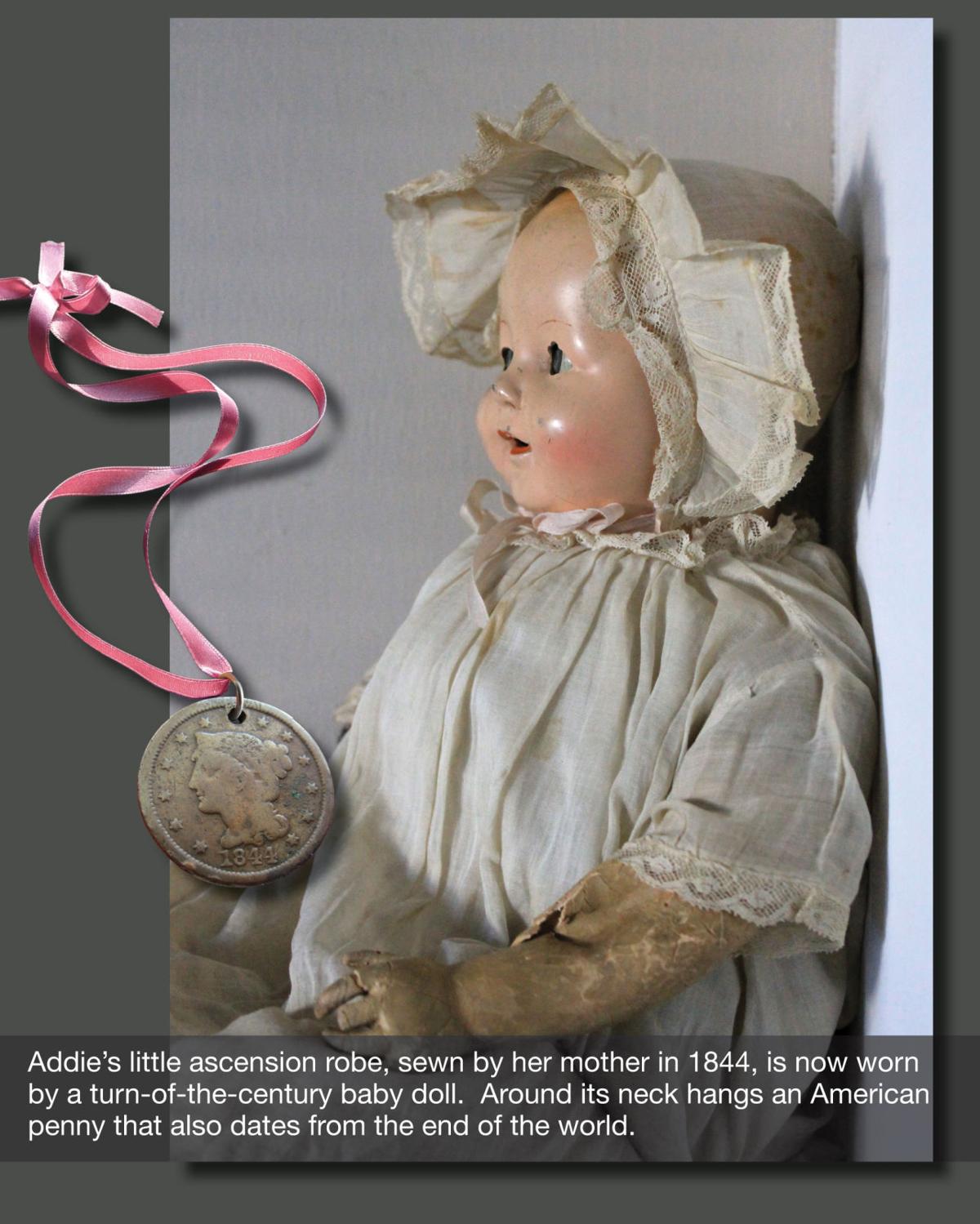 So here it is autumn and anywhere you look it seems as if everything is dying so it ought to be a good time to talk about the end of the world. That’s what they thought in 1844 anyway—and they weren’t just thinking about it and talking about it, they were getting ready to do it. When dawn broke on October 22 it was the beginning of the Last Day on Earth.

People had special outfits made to wear on the last day of history—they wanted to go to Heaven looking their best. Women in Newville wore white robes because they assumed that’s the way angels should look. Businessmen in town didn’t open their shops that day, farmers didn’t bother to harvest their crops, and John Potter at Sand Hill school told his students not to show up because he would be up in the sky somewhere.

There was a small crowd of believers in Newville, about 30 of them, when the preaching and exhorting began, and about double that number by the time the scary, glorious day arrived. They all started their journeys to Heaven as Methodists, Lutherans, and Baptists, but by October 1944, when it was time to have their tickets punched, they were all known as “Millerites.”

The ball started rolling some years before in New York when William Miller was studying the scriptures and charting the prophecies—adding together years and reigns—and came up with a startling total indicating that the Day of Doom was going to hit in 1843.

His book went viral and his preaching engagements all over the northeastern US attracted massive quivering crowds. As the designated time approached his nervous followers insisted he be more specific, so the window of opportunity for the Lord’s return was nailed down to a period between March 21, 1843 and March 21, 1844.

When that deadline passed without any stir of Apocalypse the Millerites rescheduled a makeup game for October 22. That date was only 11 days before the election and it was a good thing because folks in Newville were pretty sure Henry Clay was going to get the Presidency and if that wasn’t the end of the world in itself then the nation was going straight to hell.

Destiny Along the Clear Fork

Newville was no stranger to religious enthusiasm. A number of famous preachers mounted the lecterns of their village churches through the early years, including a man who was shortly thereafter instrumental in launching the Mormon church.

There were those who believed Newville might be the New Jerusalem, so when the End of the World fever started gaining momentum they eagerly watched the skies over Worthington Township. Then the Great Comet of 1843 tore through the night skies in March of 1843 and it was as if the Signs and Portents all agreed with the Millerites.

Before you get your hopes up for the end of this story let me just caution you that history has branded this event in 1844 with a name: it is called “The Great Disappointment.” So you know in advance there weren’t any of these elect who really got raptured up out of Newville.

This passionate frenzy was going on all over much of the US—people getting ready and packing up—and the hysteria of it was so out of the ordinary that it was well documented. But around here in Richland County nobody was keeping a journal of the proceedings because they didn’t expect there to be any tomorrow. You don’t take minutes if there isn’t going to be another meeting.

The local newspapers generally ignored the believers, but this notice appeared in the Richland Shield & Banner: “Tomorrow is fixed upon by the Millerites for the universal catastrophe. If the day is not fair, the exhibition, we presume, will be postponed.”

So how do we know what happened in Newville? That’s the interesting story. The business of predicting the end of the world has been going on for centuries, millennia, and there have been Get Ready prophets in every generation on the planet, ever since John scratched out his Revelations. Drive down Rt. 603 at Rt. 39 today and you’ll see the message is still being proclaimed the same as it was in Medieval times before they had clocks.

But this time, this particular end of the world in 1844 in Newville Ohio, saw a very special set of circumstances and a most memorable outcome. Because in the months leading up to October 22, while all her neighbors were wrapping up their earthly affairs, Lydia Stone was getting ready to have a baby.

Imagine the confusion and consternation that would cause: the world is about to end and life is about to begin. Lydia didn’t know whether to knit booties or wings.

So she came up with a very practical approach that satisfied the demands of both possible outcomes: she sewed for her baby a simple small gown that might be suitable for either Baptism at the Newville Church, or equally appropriate for greeting the Lord on High.

Lydia was biting her nails though, hoping and praying that her baby would arrive before Jesus because she didn’t really want to face the prospect of ascending when she felt so awkward and uncomfortable.

When the big day dawned her Newville neighbors were all grinning and changing into their ascension robes. Harley Heck set his chickens free.

They got a wagon ready to cart Lydia up on to the heights above the Clear Fork where they all gathered at the river.

But Lydia never climbed into the wagon—much as she wanted to—the spirit was willing but the flesh was having a baby.

Naturally the Newville Millerite adventists were all quite deflated the next day and, naturally, after the merciless ribbing they endured the next few years from local Methodists and Lutherans, they weren’t much inclined to want to recall the date of their folly.

Lydia’s little daughter did, though. She celebrated the day every year of her life until it ended in 1936. Her name was Addie, and she generally told her friends that it was short for Adelaide, but her family knew that her real name was Advent. After her childhood she spent her life far from Newville.

When she was 55 Addie had a granddaughter and the parents kindly named the baby Lydia. When her granddaughter was born in 1899 Addie bought the child a doll that was probably as big as the baby…actually it was intended to be specifically as big as a baby, because she prepared for the doll a special garment, unique in its personal, familial and historical significance: her 1844 baby ascension robe.

I met Addie’s granddaughter who told me this story, and I once held the doll that still wears the simple white and angelic robe created in 1844 for an unborn child with one foot in this world and one in the next.

I have always wanted to get this story into the Richland annals somehow. It came from one of those fateful encounters in my life when I happened to be somewhere and glean information that would never otherwise be known in our hometown; when I had to recognize that one of my roles on earth is to make a record of what I have been oddly appointed to understand about our past.

I met this woman in Salt Lake City in 1987, she was a tour guide on Temple Square. She asked me where I was from and when I said Ohio she said 'Oh my family once came from Ohio'; and when I asked where from, and she answered Newville, I got really excited. She didn't know the town was long gone, had never been to Ohio. We talked for several hours, and she showed me all over the Mormon Tabernacle, while I took notes about the fascinating tale of her Richland County ancestors.

Click on any photo in this article to open an album of Newville illustrations.