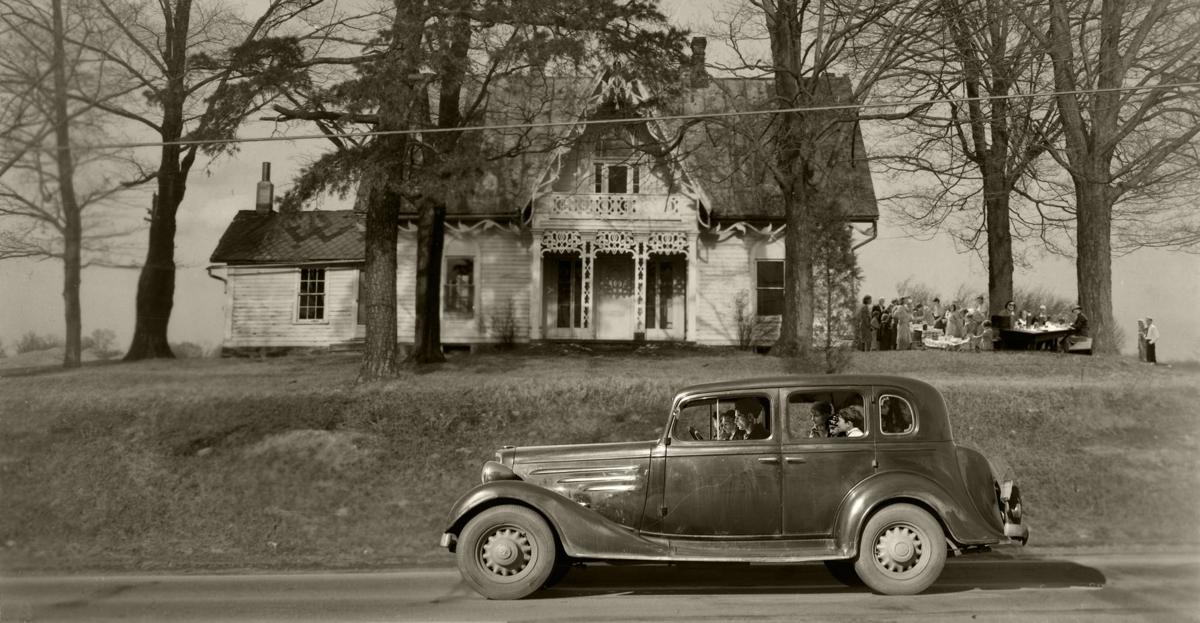 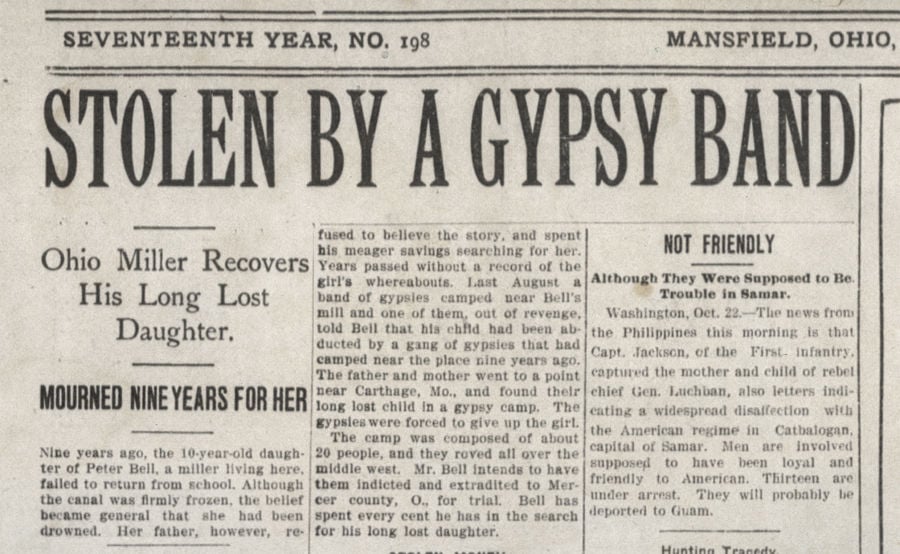 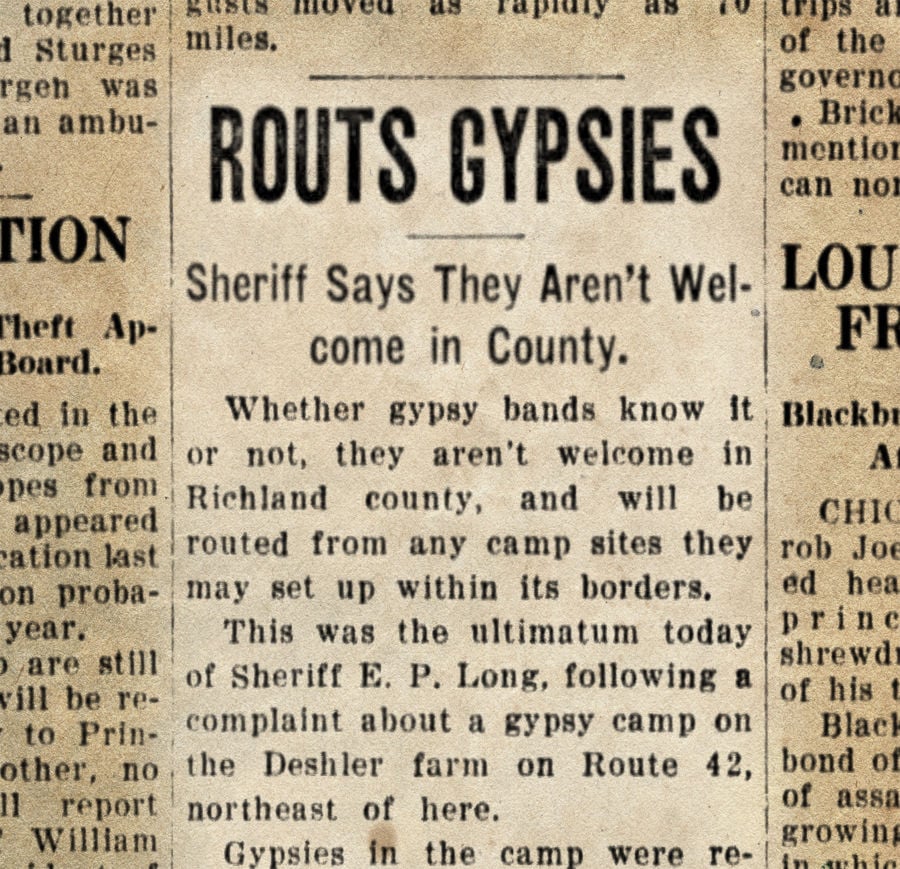 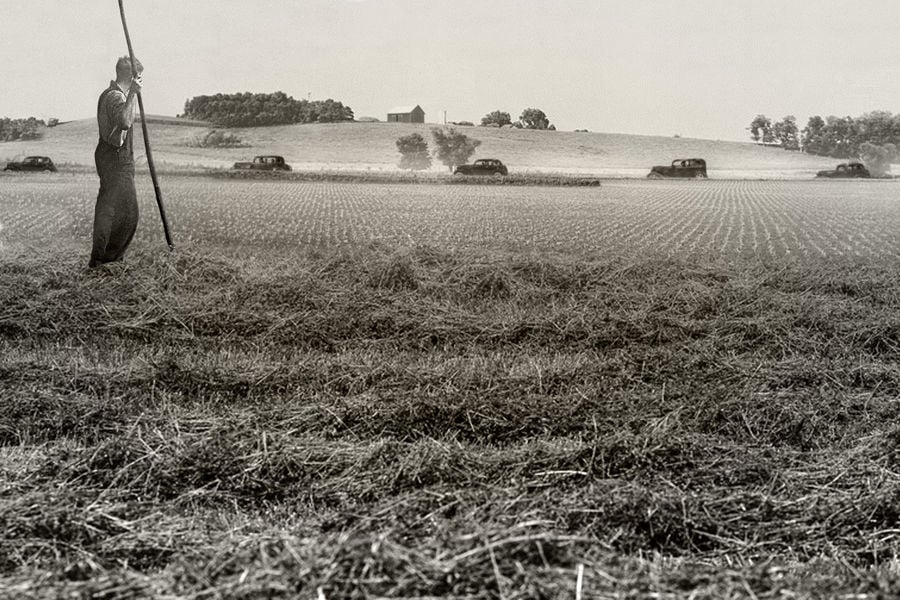 First of all, let me be clear: Richland County is blessed with Gypsies.

As a reporter of history, I am duty bound to lay out the background material in the most accurate means possible and, to be honest, most of the scene-setting of this story involves a disturbingly negative slant on Gypsies, because that is simply how it was back then.

But read to the end before you decide where this negativity lands, because it is a new age we live in, and having Gypsies here today is a different story.

Richland County is blessed with Gypsies.

It certainly did not always seem that way.

Looking through local news clippings about Gypsies from the 1880s through the 1950s it would be easy to assume the worst. Most of the headlines are about fending off Gypsies; counting the loss after an encounter with Gypsies; chasing Gypsies out of the county.

Nobody knew where they came from, and that was unsettling in itself; and once they were gone there was no tracking them down, especially if they took your wallet with them.

There was so much that was wonderful about having them around: they carried such gayety throughout the county. When they set up near Butler out by the river, or in Mansfield on the East Fourth Street circus grounds, there was music and laughter that echoed across the fields.

When folks from the neighborhoods strolled out to watch the dancing, the Gypsies welcomed them with smiles and stew.

It seemed romantic, and in fact they called them the Romanies.

But all that freedom—all that wild, abandoned joy of life—it could be intimidating. It was so alien, and so exactly the opposite of what those deep-rooted farming folk expected of life.

The farmers were grounded, Earth-bound; and those Gypsies were free as the wind. They blew around here and there: they just showed up and then they were gone.

And after they were gone you found out what of yours they took with them.

Yet in spite of that, folks were happy to help them. The Gypsies seemed carefree as children, and it evoked a primal and protective urge that made it easy to feed them, to fix their wheels when they were stranded; to straddle a language barrier in order to figure out how to help them on their way.

That is how it started out in Shenandoah: with a simple can of water to put in the radiator.

At Eileen’s home on Route 13 that was the rule: they always helped anyone who asked.

It was Depression times and there were hoboes ranging the land, and homeless folks—alone or in families—whose livelihoods were uprooted out of the community and blown in the wind by the ruthless economy.

If they asked for food there was always at least bread and butter to feed them.

The Gypsies were no different—they looked just as hungry; they seemed just as humbly grateful for anything the farm folk would share.

One day there was an old worndown Chevy that stopped on the road at the end of the lane, and when Eileen’s father walked out there all they asked for was a can of water to put in the radiator.

The Gypsies seemed to always have big cars, and they traveled in long, strung-out lines.

These were modern versions of ancient caravans. In the 1800s there were long lines of brightly colored wagons drawn by beautiful strong horses. In the 1930s they were these huge old cars, big as boats.

The Sherriff knew how to spot them. The law was eager to get the Gypsies on their way, and out of the county. They had too many thefts reported in the Gypsys’ wake to feel easy with them on the local roads.

There was a farmer outside of Bellville who was giving directions by the side of the road when a Gypsy woman leapt out of the car and held him while her husband rifled his pockets. There was no way to counter that kind of lawlessness.

It planted seeds of fear and distrust.

So, people were wary when there were Gypsies in the area.

But during the 1930s, when a quarter of the US was out of work, it made Gypsies of all kinds of people. Everybody in need hit the road.

It could have been anyone who stopped on Route 13 at the end of the lane hoping for a bit of water.

But it was the Gypsies. And that’s what uncorked the panic when Eileen went missing.

It was Eileen’s birthday and all the relatives were over for a celebration. She was 4, and she was a doll. You couldn’t help but want to hug her.

Grandma asked “Where’s Eileen?” and they knew she had been out in the yard playing with her brother.

They looked and called, and then called louder when she didn’t answer.

That was when the panic started overflowing its banks, and the flood started rising. It didn’t take long before it swept away all reason.

Eileen was gone. The Gypsies stole her.

Right away the menfolk were out racing up and down the fencerows calling her name. The kids ran to the neighbors. Someone called the Sherriff.

The family in itself constituted a posse, but they started gathering neighbors in case they had to make chase.

They lined the cars up in the lane and were making assignments. They needed to leave a party behind because it could be a ruse. What if the Gypsies knew they would all take off in pursuit, and were waiting nearby to loot the house when everyone was gone?

Someone collected the weapons. Each household had a shotgun for chasing foxes out of the barn, and they divvied up the shells.

Poor little Eileen! She was so cute the Gypsies just couldn’t pass her by.

But what if they wanted ransom? What if they took Eileen because they knew her folks would pay to get her back!

Eileen’s aunt started screaming, “We don’t have that kind of money!” No one had even put a price on the crime yet, but she was already racing ahead of the story.

They expression they use is ‘she was beside herself.’ It implies there were two of her, and that is exactly how it was: one of her was hoping, praying, wringing out her heart like a wash cloth to make her baby come back; the other her was already sure that she would never see Eileen again.

How do you function with a rift like that sundering your soul from itself? You don’t. Eileen’s aunt was collapsed on the rocker and it wasn’t even rocking.

When the sun hit high noon, it had been less than an hour since Eileen was taken.

All the neighbors were gathered and pacing in the front yard with an urgency that only the thinnest thread of reason kept from flying off in hot pursuit.

They agreed to wait until the Sherriff arrived, and he was on his way. They were listening for a siren.

That was when Eileen’s Grandma stepped into the kitchen. She was looking for the phone book, and what she spotted was something else entirely.

There behind the stove was Eileen’s shoe.

The breath went right out of Grandma, and as she bent down to pick up the shoe she saw that Eileen was wearing it.

She had fallen asleep behind the cook stove. She had curled up there about an hour ago to take a little nap.

In retrospect, it all seemed pretty funny—at least in terms of heaving great sighs of relief.

But the fact that the harrowing hour of suspense opened a Pandora’s box of such virulent fear indicates that the event touched a nerve that is perhaps far older and more elemental to human psychology than might be warranted by simply the presence of Gypsies in Shenandoah.

It could touch on one of the oldest conflicts in human history embedded into our communal social memory.

It traces clear back to the beginnings of civilization.

There was a time when all the tribes of Earth roamed about: the ‘hunter/gatherer’ epoch of history.  This long prequel to culture ended when people learned to farm; when they started staying put in one place in order to grow food.

It is a discord that has been going on for a very long time.

It took thousands and thousands of years for the conflict to reach Shenandoah, Ohio in 1938.  And fortunately, it was a skirmish that ended without bloodshed or even hot words.