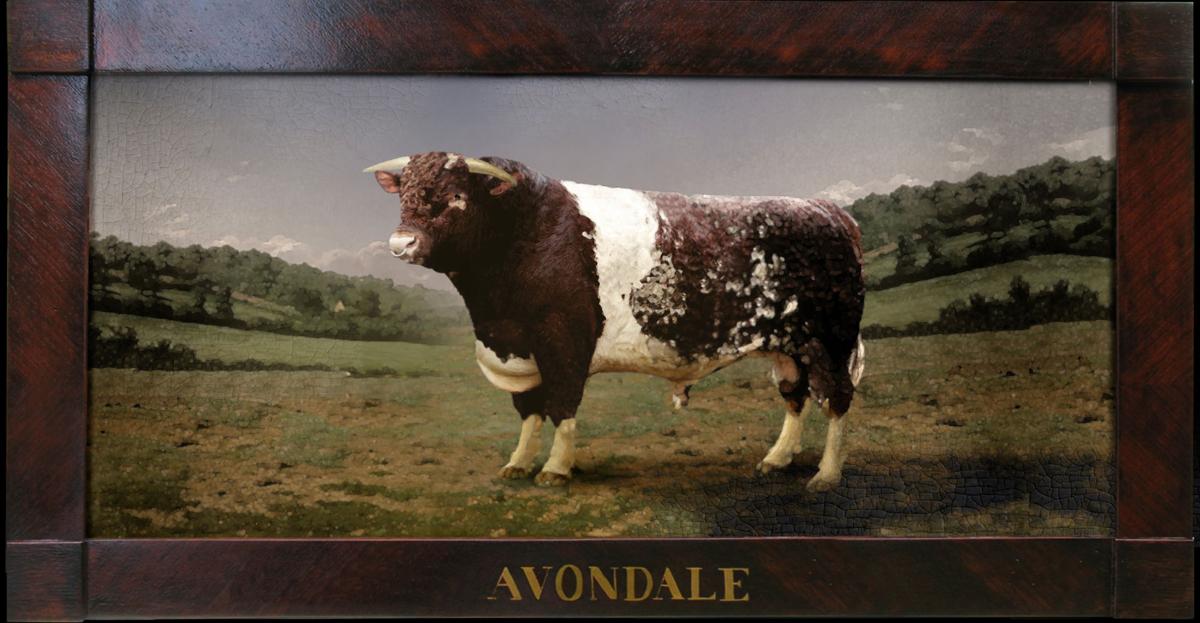 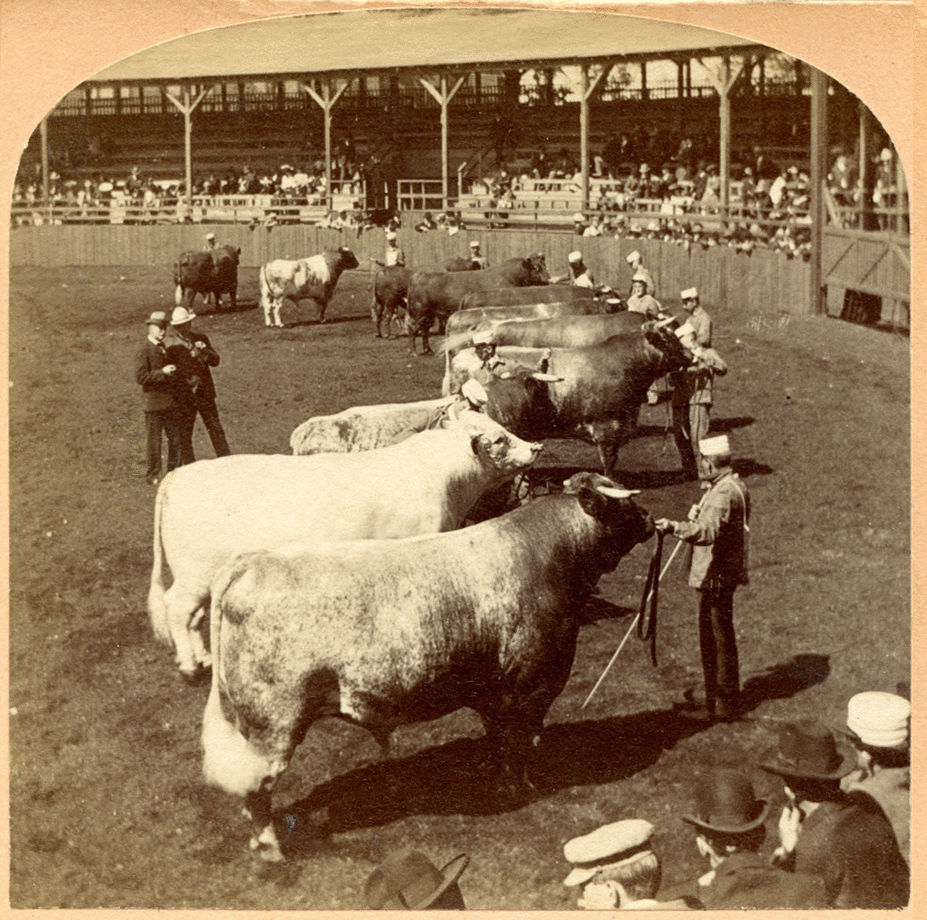 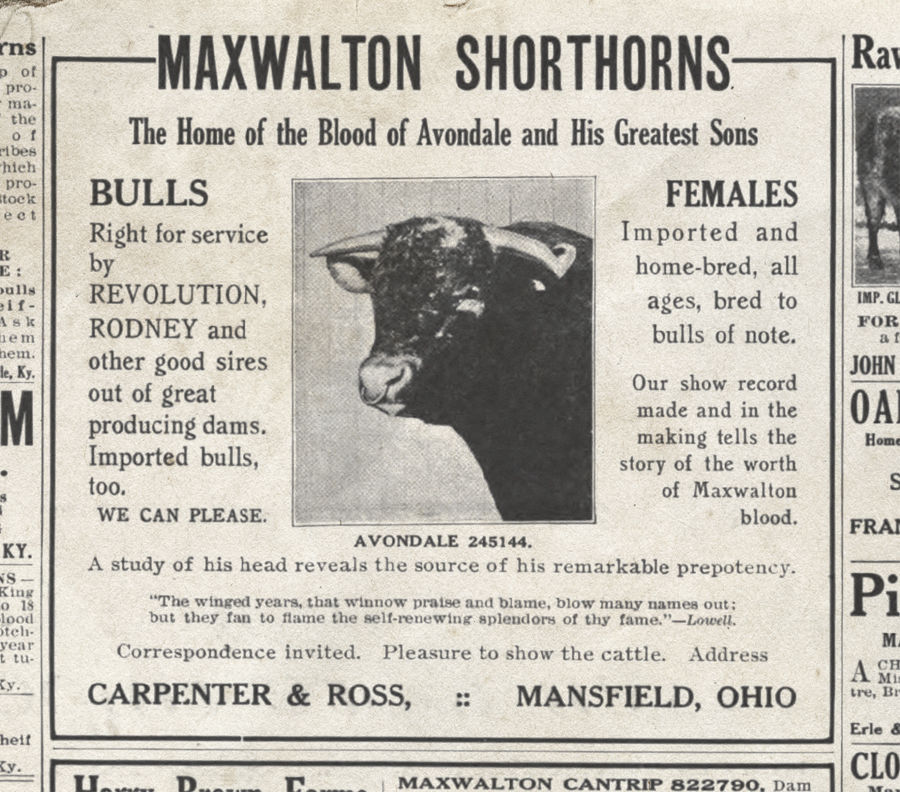 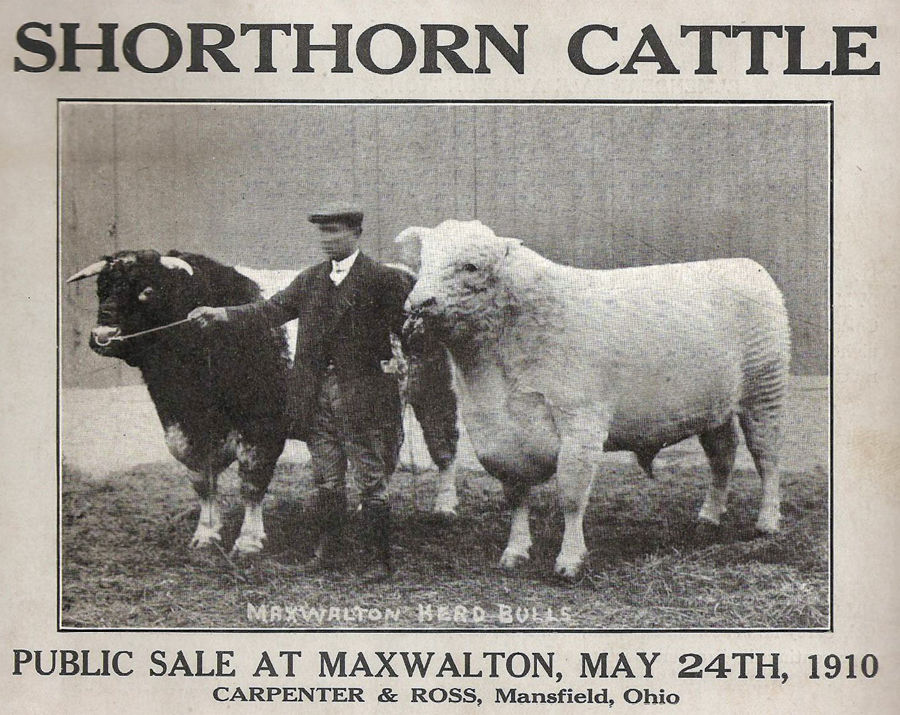 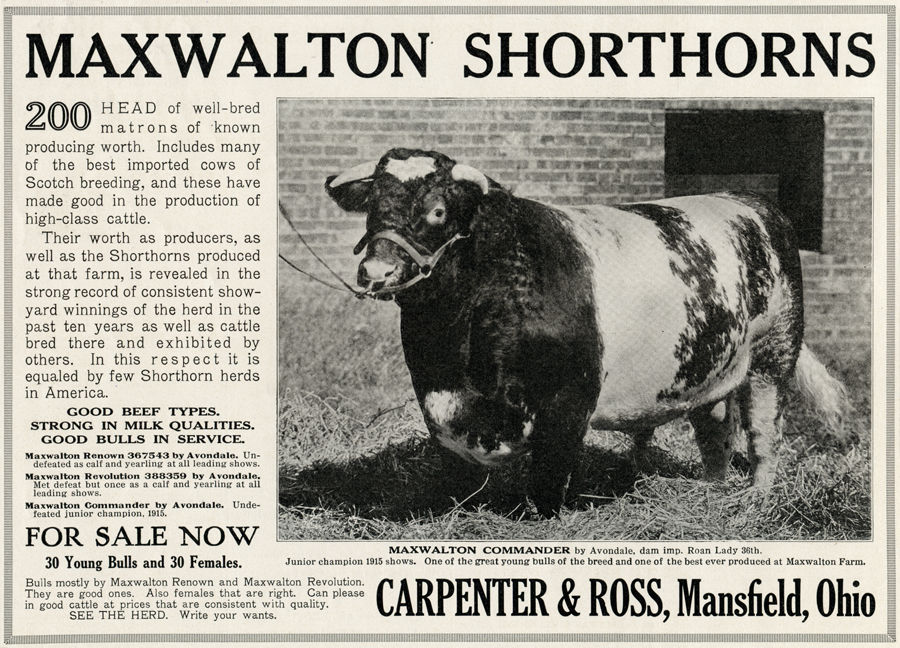 Maxwalton Commander was another prize winning descendant of Avondale.  From Breeders Gazette, December 1915. 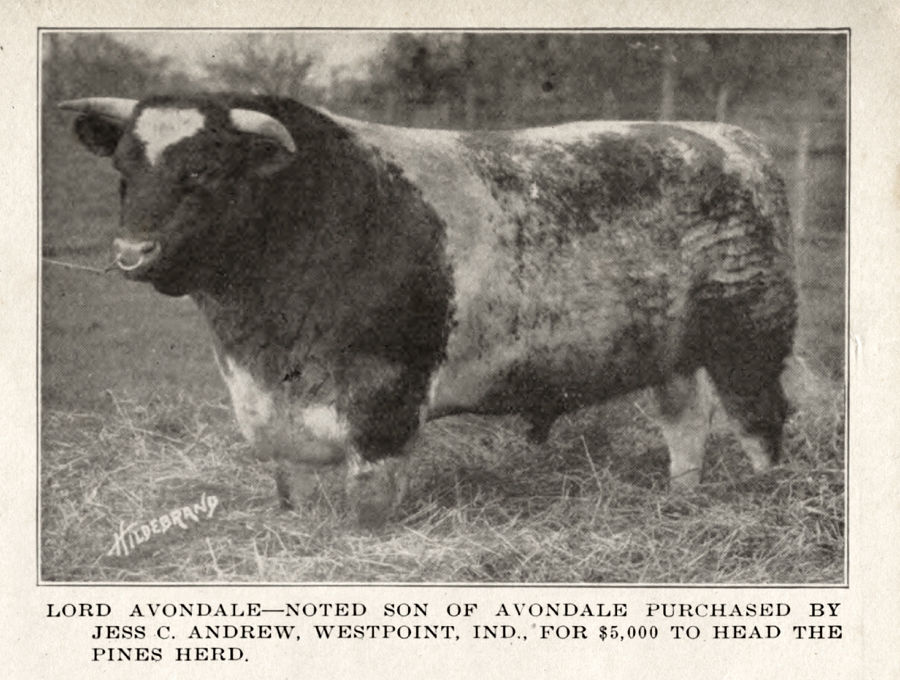 Lord Avondale founded one of the most highly respected shorthorn dynasties of his own after leaving Maxwalton Farm.  Breeders Gazette, 1919.

Among the Scottish names given to Maxwalton farms were Glegerney Mains, Brawland Braes, Keilburn, and Tillyrye.  Some of these farms adjoined Maxwalton in the Lucas Road area, or stood nearby on Mansfield Washington Road; another was as far north as Olivesburg on Franklin Church Road. 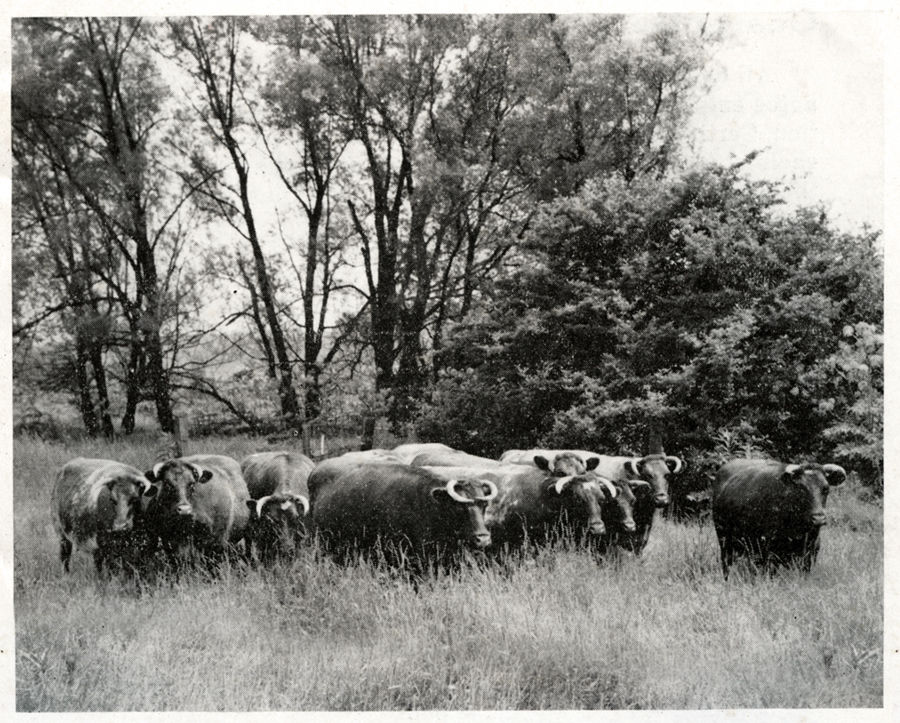 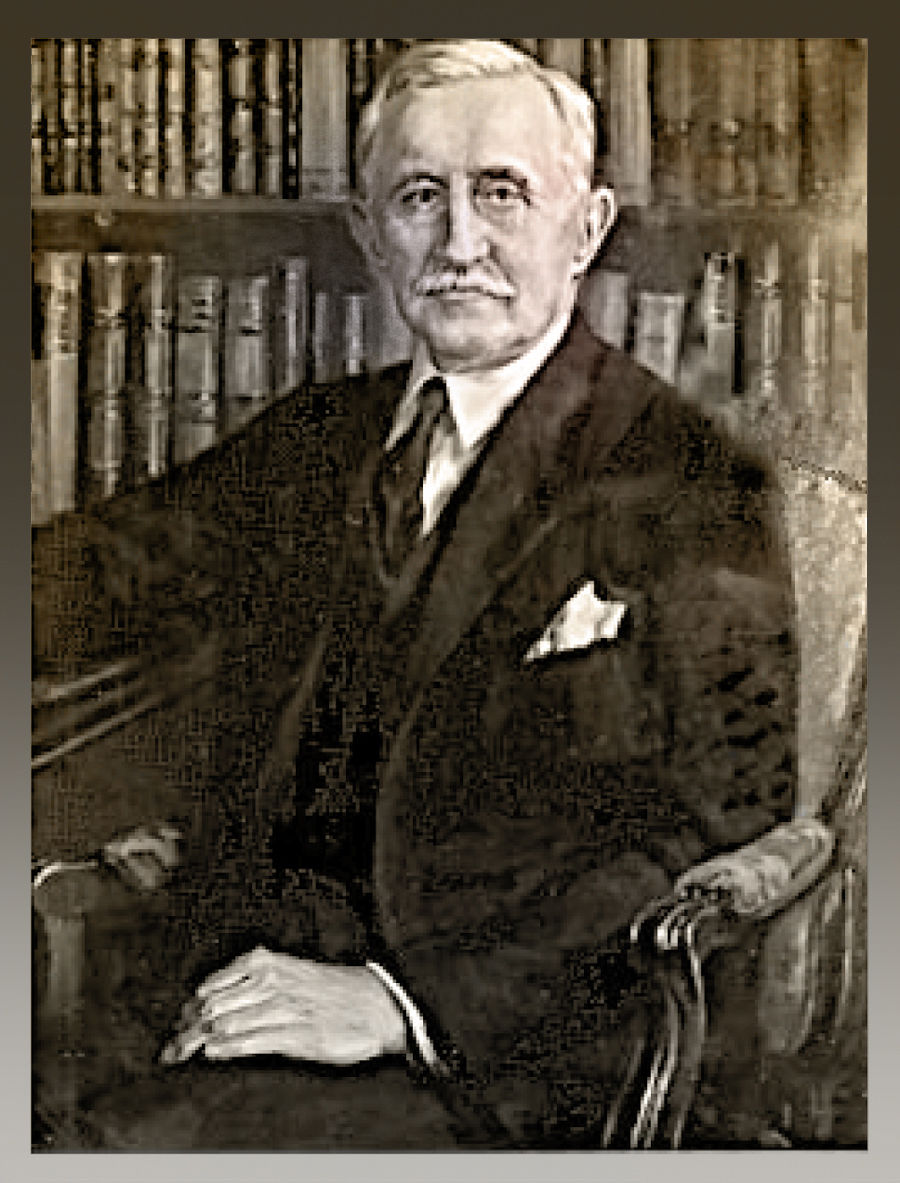 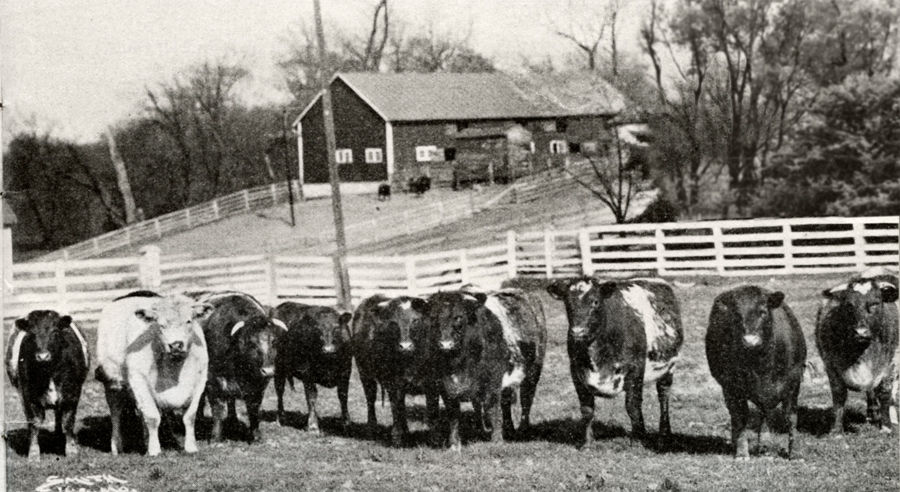 A Maxwalton herd photographed on site for an auction catalog. 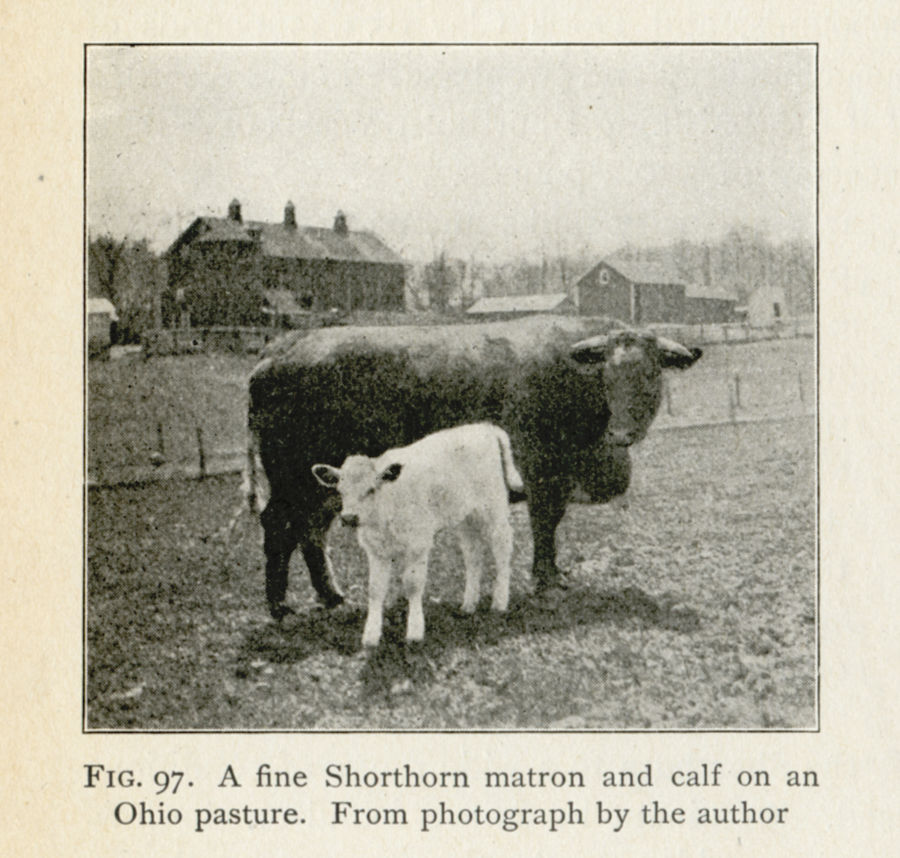 This photo was taken in a Maxwalton field on Rt. 39 and captures their distinctive landmark barn with three cupolas.  From Types and Breeds of Farm Animals by Charles Plumb, 1920. 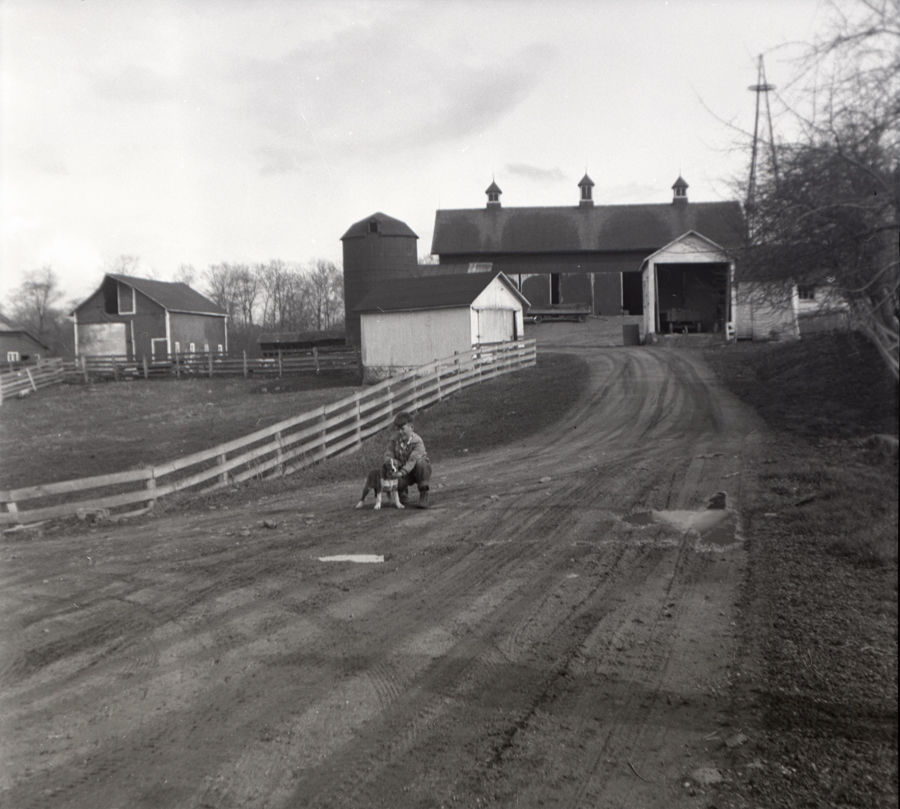 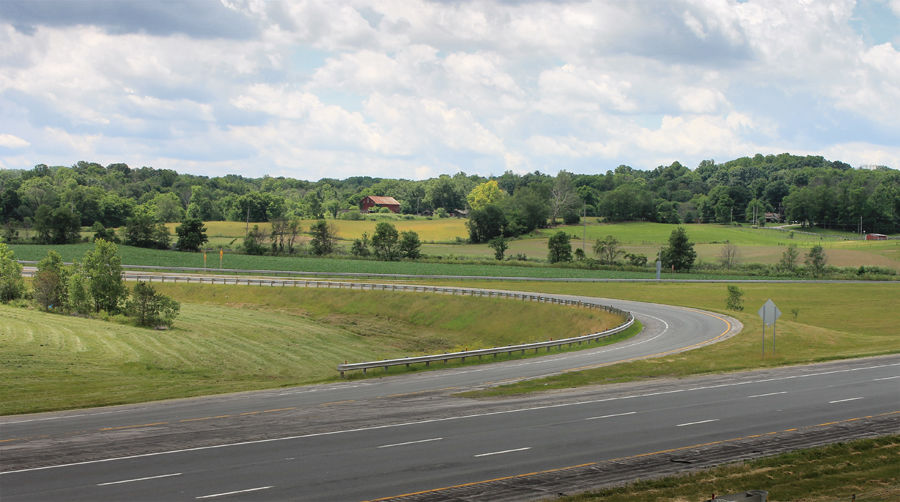 In the decade following the last Maxwalton herds the farm was invaded by Interstate 71.  This view from the I-71/Rt. 39 exit shows the Maxwalton barn in the distance.

This view of the Maxwalton main barn shows I-71 in the background occupying the fields where a dynasty of cattle was born.  Today the farm is private property.

He was the kind of noble creature of whom legends are made. He certainly made the reputation of his farm and his owners. In livestock news and in the stockyards of the world everyone was familiar with the names Carpenter & Ross and Maxwalton Farm.

There was a time in human history—and it was a very long segment of the human timeline—when greatness and wealth and value in society were measured by one very specific commodity: cattle.

The more cows a person owned, or a village or a nation, the greater they were.

Whole epochs of history are based on tribes stealing cattle from each other, and entire dynasties were recorded on clay tablets all according to cattle.

Each ancient language around the globe, and all the sacred books of the east as well as the Book of Genesis, had a specific word that translates exactly to “rich in cattle.”

Cattle was chattel, quite literally as far as early English language is concerned; and the same root word from which cattle derived also produced the word ‘capital.’

So, based on this beef-oriented frame of civilization, it is easy to say that the history of Richland County is astonishingly and powerfully rich in cattle.

One of the most famous bulls of the 20th century was born between Mansfield and Lucas. His legacy and his progeny constitute nothing short of an American dynasty.

It all started in the early 1900s when a Mansfield businessman decided to use his father’s farm to raise a herd of cattle.

He went to an auction in Chicago and bought a cow for $500. In terms of today’s dollars that would be the equivalent of $12,900: which was a lot to pay for a cow. But she was not just any cow.

She was a prize winner descended from a long line of prize winners, and at the time of the auction she was carrying a calf that had been sired by the bull who won first place three years in a row at the International Live Stock Exposition in Chicago.

There was every reason to hope the calf she carried might be something very special.

She was living at the cattle farm on Rt. 39 when she gave birth on January 5, 1905, and her calf was entered into the American Shorthorn herd book as Avondale 245144.

It wasn’t documented how much he weighed when he was born, but it is a matter of record that at 3 years he was 2500 pounds. Between those two weighings his life was already significant.

As a 2 year old Avondale took second place at the International, though it must be recognized that the bull he lost to was his own father. At that time his owner turned down an offer of $10,000 for him.

He went on from there to bring championship trophies home to Lucas Road in 5 of the next 6 years. Five of his sons subsequently took the first prize immediately after him; and in the next 25 years more than 20 of his offspring were first prize winners.

Reading through the records of Shorthorn Prize Winners in all American and International exhibitions from 1900 to 1924, where each animal’s pedigree is documented back two generations, at least a quarter of the winners in the book have Avondale or his progeny in their family tree.

And more than that, his genetic advantages were spread to dozens and dozens of his offspring; and through their increasingly proliferant children; through successive generations of cattle all across the US and Canada by breeders who wanted their herds to be just like Avondale.

There is no saying how powerfully influential and widely disseminated his DNA was as it changed the cattle world.

As the legacy of Avondale grew, Maxwalton became the epicenter of the shorthorn cattle world. Two times a year they held auctions at the farm on Rt. 39 that brought hundreds of breeders to town from all over the US and Canada.

These sales became such important events in the agriculture industry that Maxwalton had its own railroad siding, and they advertised that they could ship their champion bulls out within hours of the auction.

In this way: sale by sale, year by year, Maxwalton gradually shaped the very composition of the North American cattle population. This is evident by reading the advertising that came from farms and ranches in Illinois, Kansas and Texas where breeders promoted their own herds as having the Avondale championship blood.

Avondale was the foundation of American herds for decades and generations.

Maxwalton was the name on the sign at a farm on Rt. 39, but as the Carpenter & Ross cattle empire grew it also served as the encompassing title for a whole collection of satellite farms. It began as 160 acres, but at its peak there were 12 farms under the Maxwalton umbrella covering 1,650 acres. They were all nearby, or at least in Richland County. The herd became so huge and diverse it required a number of different field accommodations for age groups and different types of cattle: Aberdeen, Angus & Polled Herefords.

The farms all shared cattle and they all shared one other defining characteristic: they all had Scottish names.

Carpenter and Ross had quite an investment in Scotland.

No wonder Peter Ross became the heart of Maxwalton enterprise: he was born in Aberdineshire, Scotland. He crossed the Atlantic in 1898 with a load of cattle, and stayed on to share his brilliant knack for breeding cattle with the North American side of the planet.

Pete Ross showed shorthorns at the very first International Live Stock Exhibition in Chicago in 1900 at the age of 23, and he showed in every subsequent show until the end of his life in 1950.

He met Reid Carpenter at the Union Stock Yard in Chicago right before Avondale was born, and the two of them formed the partnership that transformed Carpenter’s shaggy farm into a piece of agricultural history.

Carpenter & Ross were the perfectly dynamic engine to power the phenomenal rise of Maxwalton. Carpenter had the genius for finance; Ross was the recognized genius in manipulating bloodlines of cattle. Together their money & know-how literally changed the world of livestock.

And they were poised to cash in during the boom of Big Beef during WWI.

Reid Carpenter grew up in Mansfield and had an entire career of building the city’s fortunes before he ever even thought about cattle. Graduating from Mansfield High School in 1871 he became an attorney and turned his business strengths toward all forms of industry and municipal development.

There would have been no Ohio Brass Company without his financial and organizational brilliance, and he was also primarily responsible for getting the Interurban streetcars established in Mansfield.

By the time he turned his vision to cattle he already had an impressive career of profit behind him. It is only natural that he would rise to the top of the cattle field as well: from 1914 to 1918 he was president of the American Shorthorn Breeders Association and his portrait hung in the cattleman’s Saddle & Sirloin Club at the Union Stockyard.

It is only natural that Maxwalton should be such an astonishingly dynamic success.

To judge its success you have only to read about its first milestone. In 1924 when Carpenter retired from the business at age 70, there was a colossal auction to dissolve the Maxwalton partnership. The dispersal sale took three days in which 282 animals sold for $131,412. The equivalent of that in today’s dollars would be $1,844,432.

If it seems like the art of cattle breeding is not a glamorous life it is because the concept of it is not often placed into a framework like Maxwalton Farm.  Picture all these high rolling magnates disembarking from their private Pullmans in Lucas, Ohio and heading to the show barn at Maxwalton.  Picture men who are used to getting exactly what they want engaged in a fierce bidding struggle over world class livestock.

These people were thoroughbreds themselves: titans of industry with deep pockets.  Henry Ford was there at the show barn between Mansfield and Lucas; and they were selling imported cows on commission that belonged to the Queen of England.  She sent them to Richland County because this was the chief venue in America for prime shorthorn beef.

Harry Black paid $20,000 for one yearling bull in 1918 after a hotly contested bidding war and, accordingly, Reid Carpenter obtained his own Pullman car to travel back and forth in comfort to the Chicago stockyards on the railroad tracks that ran through his farm.   It was the stuff of high drama and good novels.

The next age of Waxwalton

After the Carpenter & Ross era ended in 1924 the Maxwalton Farm enterprise took a deep breath and drove their cattle on into the next decades with vigor and continued success. In the hands of the Hartman family, of the Hartman Spreng Company, the descendants of Avondale continued to top the markets of America and make agricultural history.

After 24 years there was a second dispersal sale, and after that the pastures of Lucas Road finally stood empty after nearly half a century of rustic fortune.

It is not likely you could ever collect into one barn all the countless ribbons and trophies and medallions and prizes that have been awarded to the innumerable descendants of Avondale.

One thing is certain: you couldn’t assemble the Maxwalton gold trophies because they were all collected during WWII and melted down in the war effort scrap drive when America called for metal.

Whatever mementos there are of Avondale today live in the world on four hooves.

“One of the great chapters in Shorthorn history came to a close when the Maxwalton herd was dispersed.

“Among the greatest herds the world has ever seen, and certainly the greatest in America, the Maxwalton herd, by its winnings in the show ring and its produce, which went out as seed stock and as showyard material for countless other herds, has long enjoyed an international reputation.”

Dick Cox was born July 25, 1928. He grew up in Mansfield's Woodland neighborhood, graduated from Mansfield Senior, and earned an appointment to West Point. He was last seen Jan. 14, 1950, when he was just 21 years old. No one really knows what happened to him after that night.

Henrietta "Jennie" Bull Culver was born in 1846 to Thomas and Sarah Bull (who lived in the beautiful brick home next to the fountain in Central Park).

Kingwood in the '20s: Mystery and murder Part I