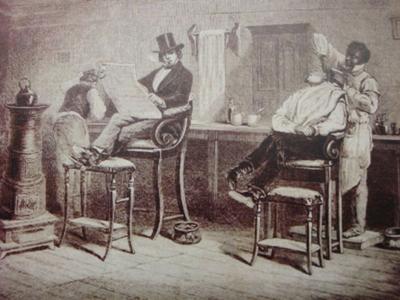 The photo is of the African American barber, Isaac Pleasants, who assisted several runaway slaves in their journey towards freedom.

Editor's Note: This is an ongoing series which runs each Thursday morning titled the Richland Chronicles, by author Paul Lintern. It is set in the 1860s and tells the story of Richland County through the eyes of young people. The books are available from Lintern for $25 a set, tax and shipping included. Each book is about 120 pages written for intermediate readers (4th grade) with local illustrations. Volume I is Amelia Changes Her Tune. Volume II is Isaac and Wolf Paw Find Their Home. Volume III is Autumn Keeps Her Secret. Volume IV is Mr. Gamble Starts a School. Volume V is Jacob Blows his Horn. Volume VI is Cassie Fights the War.

Two Pleasant Surprises Isaac Pleasants was a barber in Mansﬁeld, and pleasant also was his demeanor.

Like most successful barbers, being a good conversationalist was almost as important as being good with a razor and shears. He had come to Mansﬁeld before the war and set up shop on Fourth Street at Foster, right next to the railroad tracks, near the freight station.

He and his wife, Sarah, lived upstairs from his shop, as was the custom of many small business owners in the city. They had a boy and a girl about the ages of Cassie and Jacob, but they were not twins. Josiah was a year older than Tabitha.

Being one of the few black families in town, the Pleasants were closely scrutinized by some, but decidedly welcomed by others. They had found themselves at home in the Congregational Church, and by the end of the war, Isaac has gained a reputation as a skilled barber and a reliable businessman.

The Zimmermans loaded the carriage and headed to the other side of town and while the trip was only about eight blocks, Autumn had collected enough food to carry that Levi said, rather than walking, Maggie could use a little outing much less stressful than the night before.

“A pleasant day for a pleasant visit with the Pleasants,” Levi said to no one in particular, and everyone groaned just because he expected them to.

It was not the ﬁrst time he had said that. In fact, the Zimmermans had shared many meals with them.

Emilene had never known a black person until she moved in with the Zimmermans. She knew that the war was about setting Negroes free from slavery in the South, but did not know exactly what that meant. Even as a 10-year-old, she was not sure where the Southern states were and what it meant to be a slave.

She had asked Mrs. Zimmerman if the Pleasants had ever been slaves, and the reply was, not really, but Isaac’s parents were for the ﬁrst half of their lives.

Emilene tried not to stare when she was around the Pleasants, but she found their dark skin and black hair very interesting in contrast to hers. The Pleasants all spoke in precise English, as though they were careful to say things correctly.

She thought about how diﬀerent that was from what she remembered of her parents, who spoke English in a way most Germans spoke it, with letters and vowels that came out diﬀerently than the way other people around town spoke.

In a crowded room, she could always single out her parents by their broken way of speaking. She could single out the Pleasants, too, but for the opposite way they spoke English.

“Greetings to our west side friends,” Isaac was saying as the carriage arrived. “My goodness, you have arrived in style. I would have thought you to provide your Maggie a day of rest after the paces you required of her last night.”

“This is a pleasure ride for her today,” Levi said. “She knows you have sugar for her.”

“That we do,” Isaac said. “Tabitha, please retrieve a worthy delight for this brave horse.”

“Yes, Father,” Tabitha said; after waving to the family she disappeared back into the house.

As the Zimmermans were dismounting the carriage, the Day family appeared on Foster Street, walking toward them, baskets in hand.

“Our favorite newspaper editor is approaching,” Levi said, waving to Matthias and his family. “What a Pleasant Day this is for the Zimmermans.”

Everyone groaned again, as they knew Levi expected it, again.

Emilene thought it a little odd that no one was going into the house, but rather was gathering outside. She didn’t know that Mr. Pleasant had quietly kept anyone from entering.

Once the Days had arrived — Matthias and his wife, Esther, and their sons, Matthias and Charles — Mr. Pleasant motioned for everyone to come stand near the door.

“I informed you that we have a couple of pleasant surprises for you,” he said. “Let me introduce them.”

Quietly, two children appeared, each about Emilene’s age; two girls, both dark skinned, although one was noticeably darker than the other. They both were painfully shy about standing before this collection of people.

“My friends, Sarah and I are pleased to introduce to you, our two new daughters — Lily and Ivy — ﬂowers of joy for our family, gifts from our Creator.”

Emilene looked as the Zimmermans’ mouths fell open, and felt a moment of silence, before a burst of laughter and joy came from all of the adults.

“My goodness, what a, well, Pleasant, surprise,” Mr. Day shouted.

“That is remarkable,” Autumn replied. “How special for you all.”

The girls looked scared. Indeed, Lilly and Ivy seemed to back away from the commotion, but soon Tabitha was grabbing them and bringing them to Cassie to meet, and then to Jacob and to Emilene.

Emilene noticed they seemed very proper and tried to be polite in their introductions, but their English was much less understandable than Tabitha’s and they spoke very quietly.

I wonder if that is how I looked when I ﬁrst came to the Zimmermans. I wonder if I still look that way.

Sarah explained that the girls were orphans of the war, that their parents had died from bad conditions on one of the plantations in Mississippi, because of the owner having no money and bad crops.

“He became furious, wicked, angry, and beat the slaves mercilessly. The Union soldiers found them. We are just amazed that these girls escaped without marks from beatings or whippings,” she said.

“But they are scarred, nevertheless,” Isaac whispered, meant to be heard only by the adults.